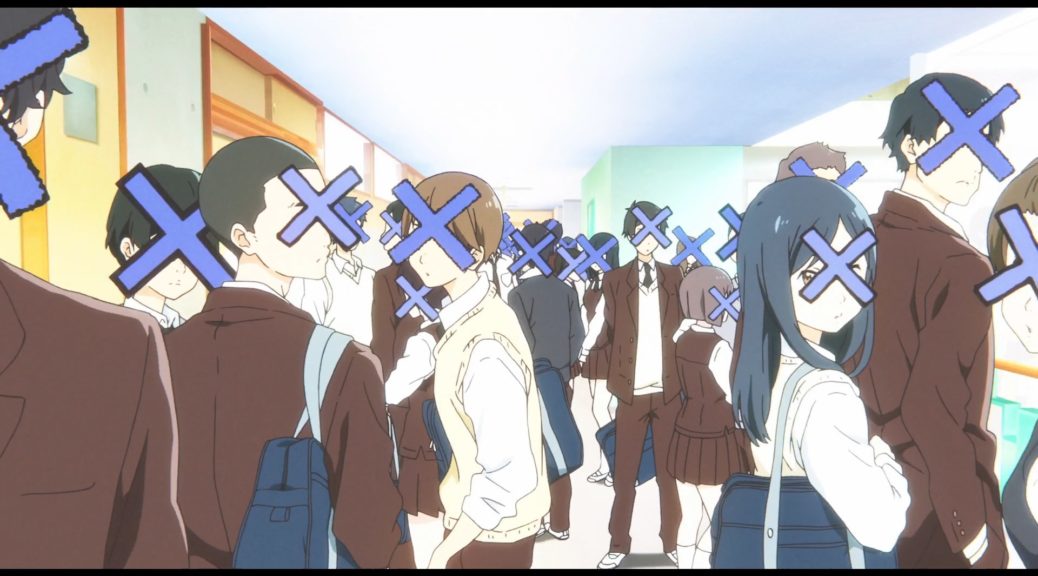 This week I ended up disregarding the plans I had for this column almost entirely in lieu of interesting anime craft developments. Good news I suppose! Let’s get to it.

I said almost entirely for a reason you can probably guess – I half expect to find motivation to talk about Mob Psycho even when I don’t have concrete plans, since it’s such a rich production that it can fuel these posts in a way that feels almost effortless. The latest episode might have been the weakest so far, as one of the least visually inspired outings also tripped over itself a bit to rush to a forced endpoint Tachikawa can’t do much about. It did represent something I find very interesting and would like to briefly talk about though, then possibly expand onto a later article; for the last two weeks, the most memorable shots in Mob Psycho have been penned by assistant animation directors. It’s not as if lower rank animators displaying noticeable quirks is surprising – idiosyncrasies are most noticeable on key animators after all! – but to see it manifested on a position theoretically less open to personal expression like sub-animation supervision is notable. There are animators whose styles will inevitably leak unless someone thoroughly corrects their work. Artists whose voices are simply louder. Gosei Oda and Moroyuki Sara were in charge of less cuts than the main animator directors who outranked them, yet they’re the ones who stood out the most. I will personally always welcome projects willing to let these differences stay unfiltered. Now let’s move from talking about the voice of animators to A Silent Voice, a film likely to be way better than my segues. The first of many Koe no Katachi preview screenings happened just yesterday, during an event attended by two main voice actresses and a Naoko Yamada who seemed better rested than after finishing the recordings. The staff and cast had good chemistry personally and in regards to this work, both the mangaka Yoshitoki Oima and character designer Futoshi Nishiya drew new art to commemorate the occasion, and the fans who attended were delighted. All well and good, but that’s not what caught my attention. Despite the strict policies against taking photos and spoiling anything major, part of the movie’s main staff quickly leaked; we will have to wait about three weeks to get the full staff list – when the movie properly premieres and we get pictures of the official pamphlet – but we already know all the directors and storyboarders involved. A rather useful side effect of KyoAni being the only company that produces every single episode of their shows is that you can fairly reliably predict who will be involved in the studio’s next production simply by considering who had a smaller workload on whatever they just finished. What this means in this case is that knowing Koe no Katachi’s key staff doesn’t only give you a clearer idea of what the film will be like, but also what the studio’s lineup for Euphonium’s second season will be. Very helpful! The last storyboarder is Takuya Yamamura, who’s leading the Animation Do segment of the film. It might sound like a big responsibility for someone who only fully debuted as director a couple of years ago, but Yamada already trusted him back then for Tamako Love Story. He’s currently a bit overshadowed when it comes to the new generation of directors, so this movie will be a good chance for him to stand out. Yamada and him were joined by Noriyuki Kitanohara, Taichi Ishidate and Taichi Ogawa – as predicted – as the movie’s unit directors. A strong lineup, which also hints at the massive scale of the project; the movie had to be divided in at least 5 acts, likely more since Yamada directly handling the beginning and end is a given. Quite the film!
So what does this mean for Euphonium? There are now some clear candidates to direct a huge chunk of the new series. The most obvious one is Yasuhiro Takemoto – of Hyouka fame, for those not very acquainted with the studio – who will have a lot more time at his disposal. The somber episode 7 was all he could do in the first season, but he’s proved many times that down to earth material is something he excels at. Another obvious pick is the young Haruka Fujita. She will have to live up to her tremendous episode 8 from the original series, this time taking on more responsibility and likely with less support by Yamada. We will see if her explosive growth continues! And since Yamamura was on Koe no Katachi, Eisaku Kawanami will have to handle most of Animation Do’s workload for this series. There are some more possible changes to the lineup, like Ishidate perhaps finally getting to show off his directional skills in the series, but that’s more or less it. Talented people who were too busy to majorly help during the first season will now be free to make up for those who are busier now. Not a bad trade!

Incidentally – curated news relevant to anime craft like this are something we have been considering as a different source of content for the site. If you like the idea (or hate it!) please say so. Soon we’ll be asking Patreon supporters to help us decide what kinds of posts we focus on.

I would like to end by briefly talking about something important that I was unsure how to address. Yesterday was the 6th anniversary of Satoshi Kon’s death. I considered writing some sort of article about him, but ultimately decided not to because whenever I do something like that I end up with a bitter aftertaste and feeling like I’m capitalizing on a tragedy. To make it perfectly clear – this isn’t criticism of the many voices that chose to commemorate his death on social media and blogs. It’s just personal awkwardness when it comes to these situations that I should probably learn to get over. So I’ll put that aside and simply recommend you to go watch any of his animated pieces that you haven’t seen yet. If you’ve seen them all, check out his manga work. Or just rewatch your favorite films of his. Remember fondly one of the brightest creators this medium will ever have. Ending on a bit of a downer this week, after being very enthusiastic about exciting developments. I promise I’ll make up for it with a cheerful post for the next installment of SakugaSakuga (作画): Technically drawing pictures but more specifically animation. Western fans have long since appropriated the word to refer to instances of particularly good animation, in the same way that a subset of Japanese fans do. Pretty integral to our sites' brand. Highlights!

I for one welcome discussion of storyboarding and not just the Sakuga Clips of the Week™. I tend to assume most sakuga fans are also fans of the visual storytelling craft in general.

Oh, that’s for sure! General talk about direction has already been a recurring element on the site, it’s the idea of talking about ‘news’ that we’re considering – not dealing with normal announcements but rather discussing new developments that might be relevant to people who care about the craft, going more in-depth. So far I can just keep doing it as part of these posts since I gave himself a lot of freedom with them, but if people love the idea it could split into posts of their own. We’ll see!

As I’m sure I’ve told you before, I’d be very open to seeing that kind of content for this blog. I understand if it ends up not happening due to time / monetary constraints, but it’s something I’m really looking forward to. That’s in regards to both having more visual storytelling craft posts and the curated news content.

So yeah, I openly support any kind of additional content this blog can offer, and I wish you guys the best.