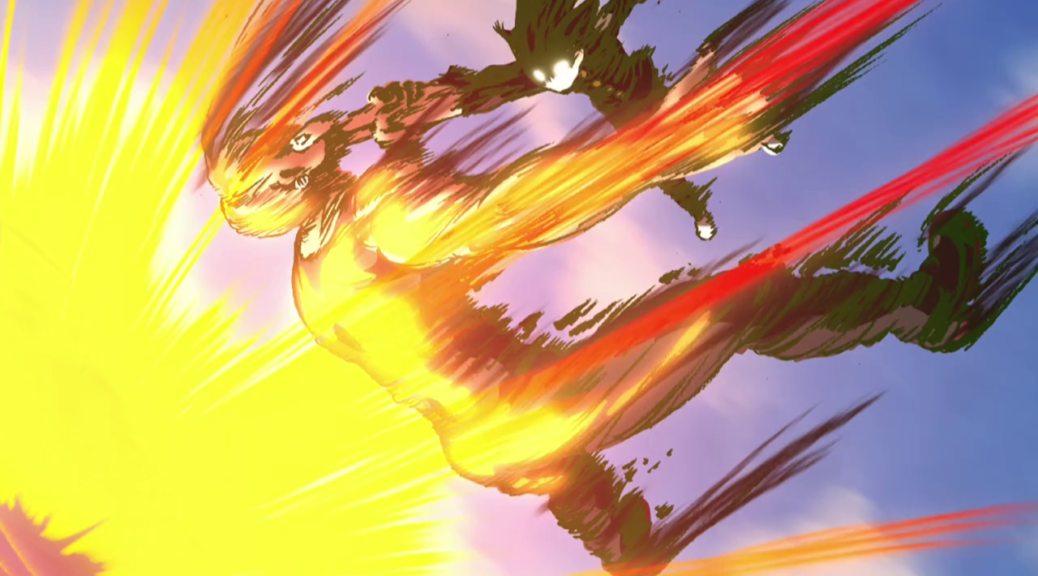 StoryboardStoryboard (絵コンテ, ekonte): The blueprints of animation. A series of usually simple drawings serving as anime's visual script, drawn on special sheets with fields for the animation cut number, notes for the staff and the matching lines of dialogue. More: Yuzuru Tachikawa, Katsuya Shigehara
Direction: Yuji Oya | Assistance: Yoshiyuki Takei
Animation DirectionAnimation Direction (作画監督, sakuga kantoku): The artists supervising the quality and consistency of the animation itself. They might correct cuts that deviate from the designs too much if they see it fit, but their job is mostly to ensure the motion is up to par while not looking too rough. Plenty of specialized Animation Direction roles exist – mecha, effects, creatures, all focused in one particular recurring element.: Yoshimichi Kameda

The long awaited return of Yoshimichi Kameda to the role of animation director finally happened. My expections were through the roof and yet this episode managed to surpass them. As far as I’m concerned, Kameda affirmed his position at the very top of the industry, and he has already become a household name that will be remembered as someone who had a big impact on anime as a whole. Just watching the endless amount of praise on twitter flowing from within the industry tells me I’m not alone in thinking that. I’m glad he declined the role of chief animation directorChief Animation Director (総作画監督, Sou Sakuga Kantoku): Often an overall credit that tends to be in the hands of the character designer, though as of late messy projects with multiple Chief ADs have increased in number; moreso than the regular animation directors, their job is to ensure the characters look like they're supposed to. Consistency is their goal, which they will enforce as much as they want (and can). because the payoff with this episode was much bigger. He was allowed to thoroughly work on it, so it all simply screamed KAMEDA in your face – the rough and sketchy linework, the snappy movement, those stylized poses. It all looks dirty, yet very polished. His flavor is all over it despite many styles coexisting within the episode; many idiosyncratic animators helped out, so the fact that he managed to impose some cohesion speaks volumes of Kameda’s prowess as an animation director – as well as key animator, of course. I was asked to talk about BONES’ Animation Department (ボンズ作画部), since they were credited under key animation this week. As the name implies, Animation Dept. is the in-house crew of animators employed by the studio. BONES mainly uses this department to train young inbetweeners, which they regularly hire every year. When they’re ready, they undergo a Key AnimationKey Animation (原画, genga): These artists draw the pivotal moments within the animation, basically defining the motion without actually completing the cut. The anime industry is known for allowing these individual artists lots of room to express their own style. exam – supposedly led by Toshihiro Kawamoto, but that’s unconfirmed so take it with a grain of salt – and if they pass… they get fired. Yes, quite literally. It means that their training has ended and now it’s time to move on, making room for new animation trainees. Most of the graduates continue to work for the studio as freelancers, so this system is ultimately quite effective. However, every rule has an exception. There are a few mainstay tweeners and key animators. I don’t know why or how they picked them, but the two that appeared in the credits belong to this group. And before people ask whether Yutaka Nakamura is a member of the Animation Dept. – no, he’s not, but he’s still employed full time at the studio. Some kind of special priviledge I suppose. 😉

I’ve praised Kameda to high heaven in the first paragraph, but paraphrasing his words, the episode was a spectacle thanks to the fantastic work of animators involed! Yuuto Kaneko – who already worked on episode 3 (Dimple’s transformation) – presumably animated the scene where Koyama activated his psychic power, then punched and kicked Mob up into the air. The shapes of various effects in the scene felt distinctly Yoh Yoshinari-ish, which would make a lot of sense coming from his student. The stunning series of punches that followed it was likely animated by Tomohiro Shinoda, a Production I.G school animator influenced and taught by Tetsuya Nishio. The use of squash and stretch technique made each punch and kick feel powerful, and the timing of the movement was a joy for the eyes. Legendary BONES action animation veteran Yutaka Nakamura animated the action climax, which featured many of his trademarks including impact frames and the so called “Yutapon cubes“. His usage of the transition from background art to background animation left me speechless. I wish I could go on with the rundown of animator identification, but those are all I feel very confident about. Kameda promised to detail it on twitter as usual, so expect this post to be updated in the near future when he does.

Next episode will supposedly continue with the powerful showcase of animation so please look forward to it!

Awesome write-up! I had no idea about Bones’s in-between trainer program. That is really neat.
Also, man, I’m just in-love with Kameda. He has to be one of the coolest and most talented people working right now.

I think everybody woke up and realized that Kameda didn’t leave money for the taxi because damn. I like that tween training program of BONES, cool idea.

Maybe I’m exaggerating but Shinoda’s cut when the Claw agent is beating up Mob reminds me of Ando’s Cowboy Bebop Movie fight scene, with a lot more of wobbliness and one-sided, but retains the quick back and forward reactions and the sweat explosion with every punch.