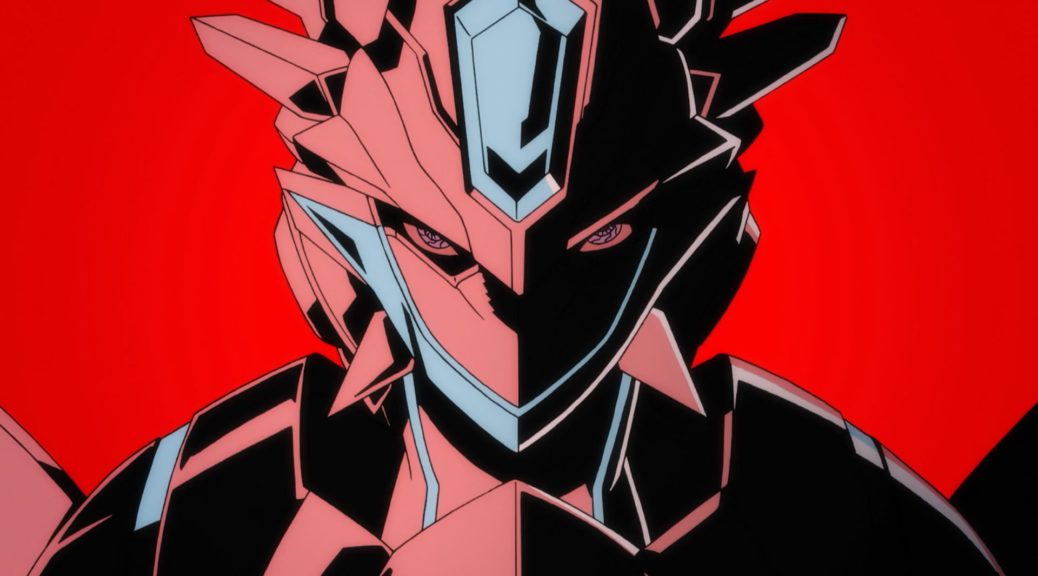 A Patreon supporter suggested looking into the bizarre production implosion of Regalia and subsequent broadcast restart, which seemed like an interesting enough topic. As a general rule I would rather not focus on projects that have collapsed – not so much because I feel negative criticism is unworthy, but rather because extensively highlighting troubled productions that follow common patterns feels like punching down for no good reason. However, Regalia’s case is enough of an anomaly that it piqued my interest, and hopefully yours as well.

For those who missed the buzz, Regalia: The Three Sacred Stars was an original TV series set to air on summer season. And that it did, until the surprise announcement that after 4 episodes it was going to take a break until September, then start anew. Some producers behind the project like Takayuki Nagatani explained that they would make modifications  to these earlier episodes, and that they felt it was a necessary measure to have the production live up to their standards. No big narrative changes were planned, but some elements like direction, audio and animation were mentioned as aspects they planned on improving. They even mentioned the inclusion of new scenes, so presumably the script would require some alterations as well. Rather vague comments then, since those broad categories are about everything that constitutes an anime. Now that three episodes of the revamped version have aired, let’s compare it to the original ones. Were their declarations true? Yes. Technically. The nature of the changes they made is obvious from the very first shot – readjusting the lighting accounts for about half the tweaks, never anything major. A couple of cuts are inserted without changing the flow, barely 5 seconds of new footage that just depict the reactions of the cast to the events going on. The length of a few sequences has changed ever so slightly, but that – plus some tiny framing changes that don’t really entail new layoutsLayouts (レイアウト): The drawings where animation is actually born; they expand the usually simple visual ideas from the storyboard into the actual skeleton of animation, detailing both the work of the key animator and the background artists. – is all the supposed revamped direction amounts to. The sound direction had been singled out as one of the issues in the original, but the revised audio is virtually the same too; only the crude SFX used on explosions and such have been noticeably altered. As it turns out though, the intro with inconsequential modifications is actually what received the most changes. After that you can find diverse changes to the composite, with new effects and slightly more intricate photography. Coloring that might look like quite the change but didn’t entail drawing new effects animation at all, and more lighting alterations. The fact that new napkins are amongst the most noticeable additions should tell you how insignificant it all is. The second episode follows a similar pattern, with general composite changes accounting for most of the polishing. There are some new aspects like two amusing replacements of background art by actual key animation, a tiny continuity error being fixed, and finally some minor animation director corrections. As you can tell though, it’s once again very minor. It’s barely worth comparing the third episode(s) since it’s the exact same case, just slightly more prominent; there are a few more corrected drawings since the character art had some rough scenes originally, and the rudimentary composite in some scenes got understandably revised. The first and only mechanical correction occurs too, though it doesn’t entail revising actual animation. All in all, we’re talking about a dozen of revised cuts out of ~300 per episode. If it weren’t for the two short spoken lines added to the first episode, this would pale in comparison to most latenight anime bluray/DVD enhancements. The renewed episodes are essentially the same, viewers wouldn’t notice the differences unles they watched them side by side. “[…] additional lines and scenes and alterations to the animation and direction” is true in the sense that it’s not entirely false, and the promise that “the ‘themes and intentions we were trying to convey’ will also be more strongly emphasized in the remake” was so vague they can get away with it. Nagatani’s words were meant to spin bad news in a positive light, trying to get new fans to check out the supposedly new version of their series they let the creators polish further. And you can’t blame him for that, but it’s hard to deny that the first episodes of Regalia are pretty much exactly as they were.

But content aside, what about the staff? Additions were to be expected as they had to produce new material, and perhaps management changes as well. Looking at the credits though, the first two episodes remained exactly the same. Not a single new animator, painter, digital artist or any other role. The changes were so minimal that they didn’t even need to ask a single new person to carry them out. It’s only in the third episode that a new name pops up under inbetweening and coloring, which only proves that they do credit the additions, but that those are negligible. If you thought that this unusual situation would lead to changes on a producer level instead… then you are right, sort of. These were the new names:

And the key detail? They appeared back in the second episode of the original broadcast, not in the renewed version. New producers stepping in halfway through a show isn’t extremely unusual, but big changes taking place all at once on a project like this is obviously no coincidence. And what’s more, these people represent companies that weren’t originally part of the production committee or even the planning group! They might have been involved to some degree before (Yahoo’s Gyao streamed the show, Bandai Visual was the disc distributor…), but they appeared in major roles out of nowhere. By the looks of it, this show had to be rescued by extra companies as far back as after the first episode. The idea that they got to the fourth episode and decided the quality was slipping is flimsy to say the least. This project encountered issues since the very beginning. This might have been a bit confusing if you aren’t acquainted with the inner workings of the industry – and perhaps even worse if you actually do understand how messy the situation is – so let me list my main takeaways from this entire situation:

A bit of a different post compared to what I usually do with this column (which I have given a new name to reflect what I do with it a bit better, hopefully change doesn’t scare you too much), but hopefully people will enjoy it. I’ve mentioned it before that I would like to write about industry matters now and then, and I already have some neat ideas – and strings to pull – to get them eventually done. This kind of thing takes quite a lot of work though, so you know the drill! Please support us on Patreon to make it possible.

Support us on Patreon so that we can keep producing content like this, and move the entirety of Sakugabooru to an independent server. Those who contribute $20 a month or more will also be able to suggest some titles for us to extensively talk about like this!

Thank you for this post, it was really interesting to read.

I had enjoyed those four episodes of this show lat season, primarly because I can’t stand CGI mecha and Regalia looked like a refreshing change on this trend. A shame that this happened.

Something that would be interesting to know is how demanding 2D mecha is compared to using CGI models from a production standpoint. Only two studios generally even try to do 2D mecha, obviously Sunrise and Bones, so I have to imagine everything takes longer and requires better animators than a normal action show. I haven’t really seen anything where a producer or director would talk about timetables and how much more exhaustive planning is, other than a few offhand comments.

Looking at it on a simple Easy/Hard axis feels off. Mechanical animation is a specific skill, and the pool of specialized artists is growing smaller since it’s something CG is inherently better suited for. Obviously newcomers are less likely to specialize in a field with less of a future, even if 2D mechanical animators are immediately in higher demand. Either way, most studios no longer have in-house/acquainted animators who can handle this kind of work, so they probably won’t even consider it even if it’s a high profile project. On the other hand, places like Sunrise act as magnets for… Read more »

Spent about 10 minutes trying to find the continuity error there Must be really small. Maybe the contrast between the animated characters, rendered table with no outlines, and the background art didn’t let me concentrate =)

The phone on the table.

Very questionable harmony aside, it’s the phone. It’s not an important element but it was meant to be on the table.

Unless you’re Mahou Shoujo Naria Girls, and we saw how that experiment turned out (though I’m sure even that series required a certain amount of pre-production work).

Anyway, it’s a shame that Actas has had so much trouble with their production schedules, though, because everything I’ve seen of theirs, the quality of workmanship has been quite good.

Excellent article about this. Now I’m even more hyped and hopeful for the rest of the show.

geez/ I can’t believe it. I thought for sure for SURe that it would be some much needed story revamp/fleshing out but it’s practically the same thing as before…
even Rinne no Lagrange which threw the viewers in a setting was more understandable, in Regalia, there’s so much backstory plot and unseen (until later episodes no doubt) character relationships that it’s really confusing…
I’m not sure I can see much of the point of just editing some missably generic parts. the worker faces being changed is nice but…
Well, so much for that…….

There really isn’t much of a difference. Many instances of bluray polishing are done silently and involve more changes than this. The production must have fallen apart tremendously, and they used the promise to update the material they had and make it more focused as a way to attract new/unconvinced viewers. And that seems to have failed on all levels, but it’s a fascinating incident nonetheless!

It’s odd, Last time Actas tried to do (hand-drawn) mecha, we got Transformers Armada (and that was a mess in and of itself, between the terrible outsourcing and Cartoon Network’s interference). I’m kinda surprised they’d try it again.

And I’m not surprised it brought production problems.

Well, at the very least, this has absolutely peaked MY interest in the project. Sounds like a pretty crazy situation. I wonder if this extra month gave them as much time as they needed, or if this is still going to end up as a rough watch later on. I’ll be watching.