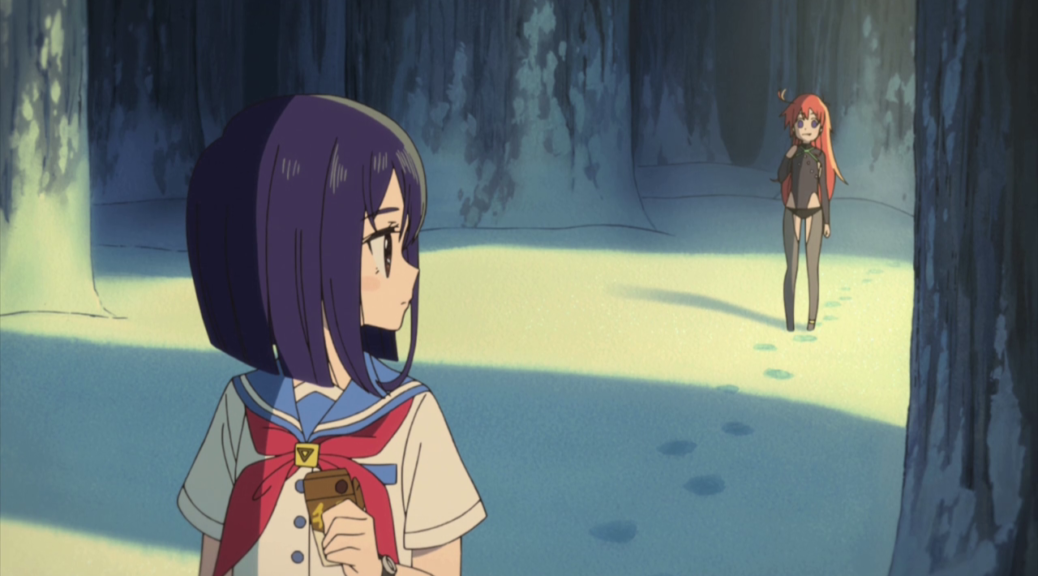 Kiyotaka Oshiyama’s debut as a series director felt arguably more Oshiyama-like than I expected. And that’s a good thing!

Before talking about the episode, it would only seem natural to introduce the creators behind the anime. Frankly, I already did that in the Fall Anime 2016 Preview.

Every once in a while, a tremendously gifted creator gets a chance to debut as series director. It’s usually a situation that animation fans familiar with them rejoice about, as it provides an opportunity for them to make their name known and craft something on their own. Considering how things usually pan out though, the more freedom the creator gets, the less likely the show is to become a commercial success – that’s the issue with passion projects, they tend to be very personal ventures that most viewers don’t resonate with. But quite frankly – as long as it’s what the creator intended to make, it’s fine. Often a shame, but commercial success doesn’t determine quality after all!
The creator here is Kiyotaka Oshiyama – an animator known for working on various Ghibli films, Dennou Coil and FMA:Milos – who ventured into directing. His first directing gig was on Space Dandy where he wrote, directed and animated episode 18 by all himself. Being one of the best episodes of a show overflowing with some of the finest talent this industry can offer, you know we’re talking about somebody special. I’m excited to see more, and while Flip Flappers doesn’t seem to be written by him, he seems to be storyboarding good chunk . I’m sure his creative voice will be heard.
Supporting Oshiyama is the character designer and chief animation director Takashi Kojima – his debut in both roles. Kojima is a great animator who most of you have probably already heard about. He was the main animator on From the New World (2012) and Mob Psycho 100 director’s Death Parade (2015). His most outstanding work however might be Your Lie in April’s episode 5, which he animated all by himself and offers a non-stop display of refined character acting animation.

The introductory episode was pretty much divided into two halves – the first one following Cocona’s mundane life, and the second one featuring her adventure with Papika in a magical land called Pure Illusion. The beginning wasn’t particularly exciting, leaving aside the avant (pre-OP part, mostly animated by Takashi Kojima himself). The animation was very reserved, and even though the drawings were extremely polished and the layout work was skillfully done, it was nothing to write home about. It had a very simple task that is fulfilled: establish Cocona’s life as monotone and slightly oppressive, then lead her into an Alice-like adventure in wonderland. Thankfully, the work of a certain group of artists prevented even those restrained first minutes from looking boring. It was Studio Pablo, who are in charge of the series’ art setting and background art. Based on Oshiyama’s instructions, they created a unique and living world that is very pleasant to look at. The show, instead of focusing on heavy post-processing filters, is selling its visuals through a simple yet attractive color palette and gorgeous environments. That approach is palpable throughout the entire premiere. Unfortunately, I think Kojima’s very angular character designs clash with these surroundings; I would have personally prefered a bit rounder designs, like Oshiyama’s own work on his solo episode of Space Dandy. Sharing the same design school for all elements in that world gave it more cohesion.

When Papika and Cocona enter Pure Illusion, we’re introduced to a world covered in snow. I’ve got to highlight the contrast between blue and white colors which was something I liked very much. Papika was clearly excited to see snow and her joyful run was animated by ex-Ghibli animator Naoya Wada – someone who I feel is going to have his breakthrough project here. After a couple of escapades, Papika decided to take Cocona for a flight in a scene animated by My Hero Academia/Mob Psycho 100’s Hakuyu Go. Oshiyama is a creator clearly influenced by studio Ghibli and it showed in the last part of the episode. As dusk was approaching, our protagonists decided to settle down amidst massive trees in an amusingly designed igloo. Their intimate time was however shortly after interrupted by these familiarly designed creatures. Papika then abruptly runs to retrieve Cocona’s lost glasses in what was possibly the most exciting piece of animation in this episode, animated by Keiichiro Watanabe. Cocona’s power outburst afterwards was animated by the digital prodigy Shun Enokido. We sadly still don’t know which parts Kenichi Yoshida and Toshiyuki Inoue animated, despite being two of the names that stood out the most in the key animation list. More proof that skill and effort matter more than pedigree!

The episode, rather than being a showcase of outstanding animation, was an exploration of creative environments. Flip Flappers is proving itself to be a unique show with a fairy tale-like atmosphere, and while I’m afraid the mood of the show will change (when the dumb outfits appear, as the opening shows), I’ll enjoy this while it lasts.

And unlike the episode, the opening actually was a showcase of flashy animation instead, especially once the chorus hits. Hinting at the series’ upcoming plot, we’ve got our first look at what the action scenes will be like. The mood of this sequence was a bit jarringly different from the actual episode – I’ve already mentioned my worries in this regard. Hopefully the sense of wonder and exploration of alien worlds remains a core element.

Now that was more like it! Wonderful haunting-yet-cheerful song, beautiful illustrations by tanu and Kiyotaka Oshiyama’s lively animation made this sequence a really rememberable one for me. Very fitting end for the episode.

Thank you very much for the write-up.

Thanks for the article; I’m interested in where this show goes. To be honest there are elements that remind me of Rolling Girls – the way the character relationships and dramatic moments just kinda ‘happened’ without any convincing groundwork has me worried. Still have high hopes though!

No mention of any of the imagery or allusion to other classic stories like hansel and gretel, ten nights of dreams or even the previews alice & wonderland? This is a show that strongly rewards repeat views, and I think you’ll find there’s an absurd number of minor details to pick up on. Some foreboding, some clever metaphors for other characters, and some almost iconic in their own right.

I definitely agree, but it seems weird to complain about missing details while not realizing he did mention Alice in Wonderland (the most blatant allusion, but also very appropriate).

He did, but in a comparative sense? I suppose it still works – but I meant in more a sense of how the show is using the frameworks of these classics. The end credits even show the story of hansel & gretel.

Even then, that feels like it’s only a part of it. The skull at 14:34 feels like a very heavy shot that I’ve only seen a few people pick up on.

I think the slow begging of the episode was very well done too, just as the Pure Illusion part. It was slow, but deliberate, it had a feeling of purpose to it. I think the music played a big role in building the atmosphere for that part. I can see how Cocona’s life could look “monotone and slightly oppressive”, but then to me it looked to be thoughtful, full of contemplation, which, granted, can look gloomy for an outside observer. I got an impression that Cocona was so immersed in her inner life that she was falling out of the… Read more »