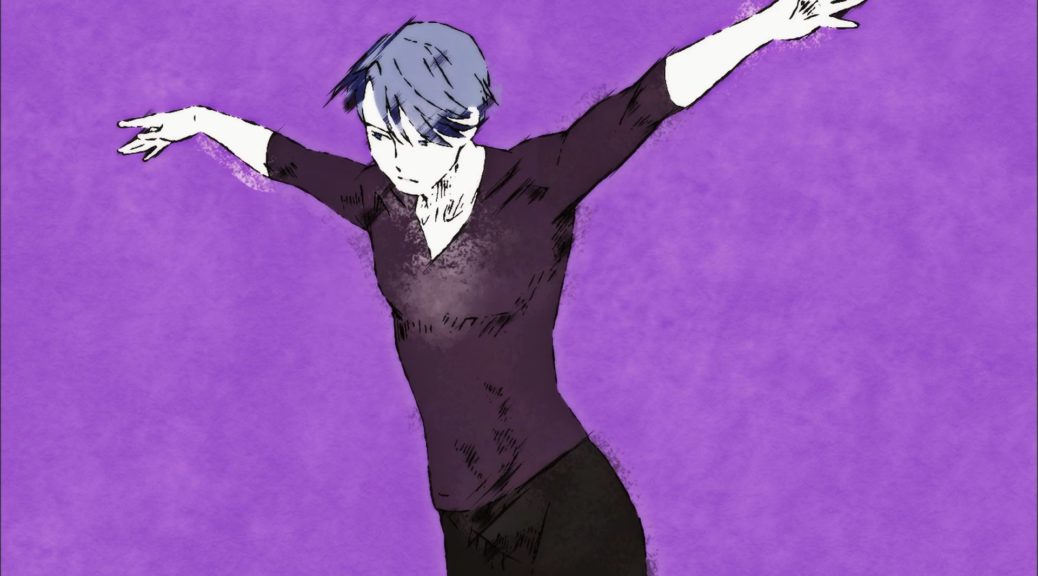 Let’s welcome the new season by looking into its most spectacular opening sequences.

No better way to start than this graceful sequence. The usage of the skating bodies as constant transitions in Sayo Yamamoto’s board immediately brings to mind her work in ENDLESS NIGHT, the precursor of sorts of this project. Perhaps not as inspired as that, but it’s understandable that she’d have a hard time living up to the ridiculous bars she sets for herself, and it’s a fascinating opening nonetheless. Even the economic usage of color is impressive, perfectly timing its changes to those neat screen wipes. The opening was actually directed by Yusuke Tannawa, a digital artist working on the show’s various UI, but if there’s another name to highlight it has to be the chief animator Sunghoo Park. He started to get noticed a few years ago, as a recurring acquaintance of the magnificent action animator Takahiro Shikama. While not being purely a Kanada school animator, the timing of his cuts was definitely more abrupt than his pal’s, making his work rather noticeable especially when it came to effects work. It was Garo #18 – where Shikama once again came to his aid – where Park proved to everyone he could perfectly stage action, as he directed, storyboarded and supervised the animation of a spectacular episode, while still delivering key animation himself.
His job this time required much more finesse though, since Yuri’s opening is all about the elegance, but his output was excellent all the same – not just with mesmerizing motion, but also through beautiful shifting linework. His role as Chief Animator is a bit misleading as well, so that’s worth addressing; he presumably key animated it all in two weeks – yes, this is as impressive as it sounds – but the presence of people credited under genga means that wasn’t quite the case. At the very least he must have drawn all the layouts, and I bet he did the rough key animation for the entire sequence. But since 2nd Key Animation does exist in the show as a credit, I feel like at the very least it needed more thorough clean-up than usual, if not outright actually finishing some key animation. Animation roles aren’t entirely separate tasks, so there are instances like this where even industry people aren’t 100% sure of what exactly happened. Considering what we’ve heard and how the people under the key animation credit are all young MAPPA animators though, I feel like that might be closer to what is usually filed under 2nd KA… while still being a bit more substantial than that. And while we’re talking about unclear production matters, I also don’t have a definitive answer on whether the footage was rotoscoped or not. My gut feeling would be that it is, since there are instances where heads and bodies move discordantly, but it hasn’t been officially brought up. MAPPA did use rotoscoping for the musical performances in Kids on the Slope, so it wouldn’t even be a new approach for them. It definitely feels different than the performances within the show, which are referenced – hence why they made such a big deal about having a famous real choreographer – but freely animated. Technicalities aside though, what a fantastic opening!

I have written about Masashi Ishihama’s peculiar style before, but openings like this convince me that I’ll never get tired of it. While it doesn’t bring anything particularly new to the table, he has a gift at rearranging all the pieces in his directional lexicon – which is quite wide to begin with – to put together sequences that still feel fresh and distinctly his own. While I’m personally more attracted to his more focused outings, this seems like an excellent crash course in Ishihama openings; perhaps his best known quirk are the silhouettes with no visible lineart and shadows, which are obviously present in this sequence. His fascination with flat shapes, which he loves to superimpose and use as textures, is a recurring theme as well. Then there’s the ornate typography, embraced as a real element to the point of often spelling out production credits within the show. Filtered photography as backgrounds, distortions and digital noise appear as usual too. Anyone who has seen Shinsekai Yori/From the New World or Garakowa is likely aware of his fondness of horror elements, which Occultic;Nine allowed him to go all out with. Overall it’s a busy sequence, which feels rather appropriate for a dizzyingly hectic series. The fact that it still maintains a faint sense of cohesion in spite of the radically different styles speaks volumes of Ishihama’s talent when it comes to crafting openings.
The list of key animators is rather impressive, featuring notable names like Masayoshi Tanaka, Keisuke Kobayashi and Akira Hamaguchi, as well as plenty of idolmaster’s best animators – fugo, Isao Hayashi, Jun Uemura, it’s easy to see how big the overlap of production teams is from the opening alone. The list could be a bit misleading though, not because they did a poor job – quite the contrary! There are great small moments – but rather because all cuts are very short and it’s Ishihama’s voice that dominates it all. There isn’t much room for motion in this sequence, and that’s perfectly alright.

Moving from Ishihama’s opening to Yasuomi Umetsu’s is no coincidence. They are student and master respectively, and even though I feel like the pupil has long since surpassed his idol, there’s no denying that Umetsu is also one of the best opening/ending directors in the industry at the moment. Ishihama still adores him, and went as far as saying that he recycled some of Umetsu’s ideas in an opening of his since he was sad his work wasn’t being appreciated enough. Unlike Occultic;Nine’s intro though, I don’t feel like this is the best showcase of Umetsu’s style – and there’s nothing wrong with that, there’s no rule saying these sequences must encompass their director’s entire oeuvre. That’s not to say you can’t feel his hand, though! Some of Umetsu’s most iconic shots make an appearance, and he has become rather fond of dancing sequences like the one in this opening as of late. Even the beautiful interstitial shots and their usage of color are very much his work, but the most distinctly Umetsu idea might be how he managed to sneak in a bit of neat action in a sequence mostly focusing on amusing daily life events. Not even close to the best fights he’s boarded, but it’s proof he’s very fond of that and also a good excuse to show off beautiful effects for a brief moment – particularly the wild smear before the strike and the sparks, likely thanks to the always reliable Nozomu Abe.
The list of key animators has a healthy share of Dogakobo’s own talent with people like Sachiko Fukuda, others clearly brought in by Umetsu himself – like the previously mentioned Nozomu Abe – and what is best described as a truckload of freelance animators. 34 KA for one minute and thirty seconds of footage is beyond ridiculous; just a few days ago I was bringing up how exactly that number was KyoAni’s record for 48 minutes, to give you an idea of how obscenely high that is. Umetsu has always been ambitious though, so it’s not actually a big surprise that if he wasn’t given much time it would require that many. He’s also known for strongly deviating from the character sheets whenever he supervises the animation of his sequences, but this time he was aided by the character designer Junichiro Taniguchi so that didn’t occur. Perhaps that would have been too much for an opening of a show where fans are invested in how the characters look. Be glad that’s a nasty discussion we’ve avoided!

Shingo Natsume needs no introduction thanks to One-Punch Man, but it’s also a bit sad that lately he’s been reduced to simply that. I hope that this opening, which he somehow managed to squeeze into his packed schedule, will show people that he’s more than a list of strong animator acquaintances. The very first scene with the seemingly insurmountable mountain morphing into a white-feathered bird – Shiratorizawa, Karasuno’s rival represented by its captain – might be enough to leave you speechless already. The solemn slow motion plays within a threedimensional court, the transitions making use of the crows that have always represented their team, the match cuts and rivalries established with the eyes – this is pretty much a perfect sequence. I fell out of love with the series – which I merely enjoy now – during its second season, but that opening is enough to get my blood pumping. Natsume punches more than once.
Looking at the rest of the staff it’s also worth noting the director Masako Sato, who’s got noteworthy Ghibli experience to the point of having been a storyboard assistant on Kaguyahime. At I.G. she’s also gained everyone’s trust, having helped out Keiichi Hara on Miss Hokusai and of course as a recurring director on Haikyuu. She handled Natsume’s fantastic board very well. And so did the animators, also a team very acquainted with the series; its action specialist Yasuyuki Kai is there, joined by the Chief AD Takahiro Chiba, the animator in charge of the series’ most charismatic cuts Boya Liang, quite the familiar group.

This ended up being way longer than I expected, so I’ll have to split it in two because I’ve already gone way over this column’s usual length. If you’ve been following this season you might have an idea of what’s coming next, so look forward to that!

Hi there. This was an interesting read, thank you. I want to get into knowing about different directors/animators/studios, but I’m not sure how to start? Could you perhaps give me some tips?

Glad you liked it! My general advice is to read up on how anime production works to get a basic idea (this guide I wrote might do the trick) then simply focus on creators whose work you love. It’s your hobby after all, so you’re under no obligation to learn about the entire industry – you can if you want of course, but it’s easier to find motivation when it comes to your favorite anime, especially when you’re starting. Look up the creators of stuff you love on ANN encyclopedia and the likes (the best databases are in Japanese, but… Read more »