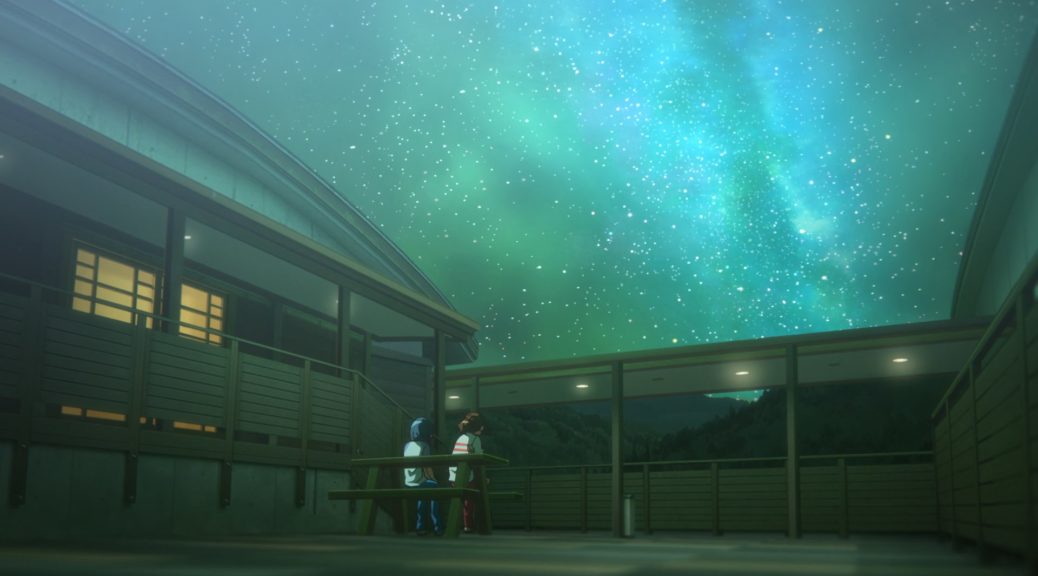 Excellent execution elevating material that hasn’t quite gotten to its best yet, and young talent blooming. This has become a trend already.

This week’s episode was a bit of a positive surprise in some regards, and unsurprisingly wonderful in others. Euphonium has never stood out because of the events themselves, but it still takes quite a while to truly get going, which isn’t ideal coming off the incredible momentum it had by the end of the first season. The first episode sort of cheated through its double length premiere to end on a very satisfying moment, but without that crutch this episode might have felt too slow… yet it fared perfectly fine. Partly because the groundwork is incredibly solid, so new conflicts can be introduced naturally; before the second season was greenlit – barely after the second novel had come out, even – they were already subtly introducing the sequel’s characters exactly as they are now. Mizore the oboe player was always quietly given more focus than regular background members just in case they had to carry on with the series, and on an overarching level the club’s past infighting had already played a big role on season 1 so further focusing on that and its consequences feels like organic progression. Chances are that it’s only going to improve now, but it feels like they have gotten the introduction out of the way faster than the first season – which makes sense, since they plan to adapt two novels instead of one this time around. 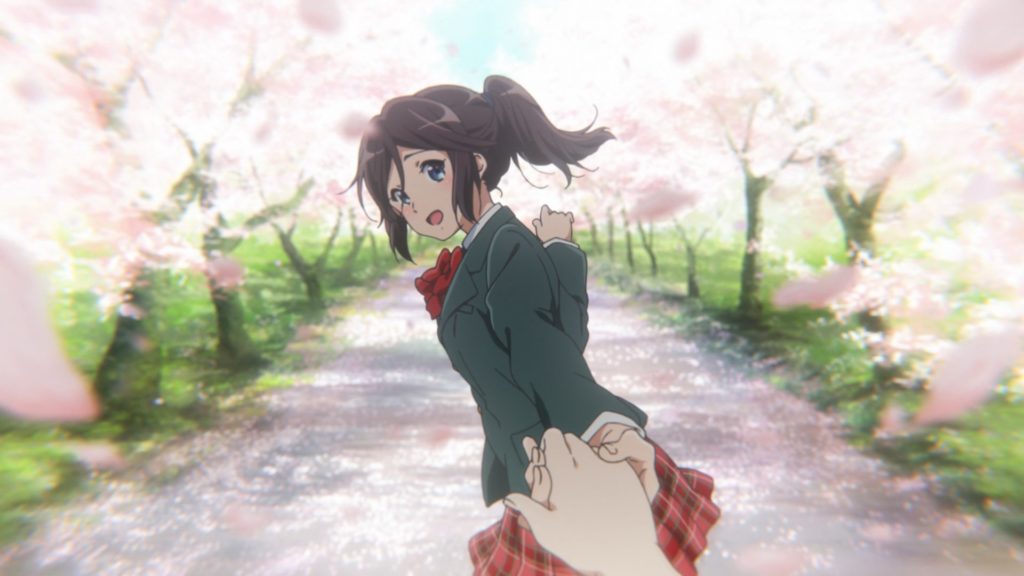 Leaving that pleasant development aside though, it’s also important to note that something did occur entirely as expected – in a good way! The episode was in very good hands, and the staff delivered. Yasuhiro Takemoto’s storyboard was quite the step up from Ishihara’s last week; in the first post I mentioned that Euphonium generally does a great job at emulating threedimensional space, even though it’s not quite as impressive as Hyouka was. And then its series director immediately appears to show us how it’s done; the camera doesn’t need to meander, it efficiently builds surroundings that are easy to understand and feel believable – it’s not necessarily about impressive scale, a cramped corridor also should feel as such. Characters are meant to inhabit a world, they don’t float in ether until they appear onscreen. If their surroundings don’t feel like they could hold them, the spell is broken. Anime layouts are above average when it comes to animation – a way to make up for the very economic usage of motion – but more often than not TV anime is dominated by flat conversations that you could set to any background with no noticeable difference. Takemoto’s attention to detail in this regard is always welcome. Perhaps the best showcase of his thoroughness is in the conversation between Kumiko and Mizore around the end; the scene evolves naturally as it might happen if two people met by chance, going through a variety of relative positions and feeling particularly appropriate since the emotional standing of the two in regards to the band couldn’t be any more different.
Takemoto’s storyboard did more than simply constructing convincing space though – if anything that seems like something he subconsciously pulls off. To keep it relatively succinct I would highlight the details that sold the episode. For starters there’s Kumiko herself – she found her resolve in the first season, but someone who has been living fairly passively and who dislikes conflict isn’t suddenly going to become a proactive badass. She tends to hesitate before – with the support of her companions, especially Reina – making her move, so seeing her slowly but with determination stepping out of her comfort zone with shots like this is fantastic. I was also a fan of these twin shots being shown as their respective characters reminisce about the past; they’re both trapped in their memories, so a beautiful cut that feels frozen in time is a nice way to evoke that. This approach feels familiar, since he also keeps using reflections to portray people trapped in their doubts. His episode in the first season did so repeatedly, and once again it happened here – as you can see he also loves to take advantage of Takahashi’s shiny instruments for that. And going back to that conversation between Mizore and Kumiko, seeing the former’s mental state briefly reflected in the game she’s playing was also neat; from hitting every note to missing a bunch once she hears Kumiko listening to the song that haunts her, ending on a very blatant Continue? screen as she’s asked why she remained in the club. I hesitate to call this subtle at all, but it’s smart delivery nonetheless. 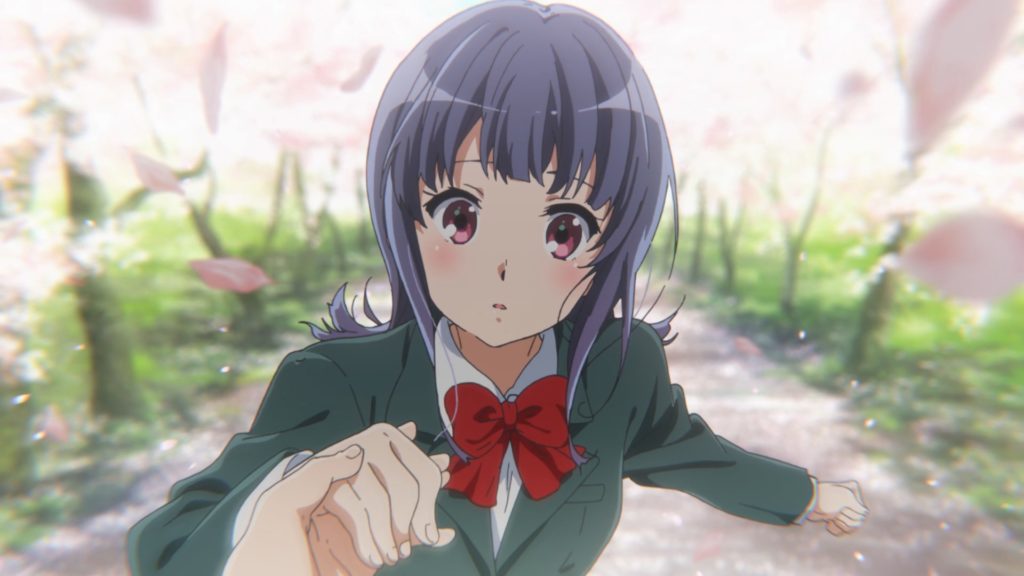 If you have paid attention to the credits you might wonder why I’ve yet to mention the episode director Taichi Ishidate, especially if you’re aware of his skill. The truth is that I haven’t because he didn’t majorly stand out, simply doing a solid job. His eye for postprocessing gives him an excellent grasp on the atmosphere, giving scenes a distinct mood noticeable even when flashbacks dim the colors. This was his first major appearance in Euphonium as a whole, but chances are that he’ll be available to fully handle an episode later where he’ll put that approach to even better use. The person who did leave a massive mark was the animation director Nobuaki Maruki, one of the best supervisors at the studio. Maruki is all about the detail, something patently obvious in his art. It’s easy to appreciate that in the episode, simply looking at hands, clothes, but particularly the hair; he constantly draws individual strands, and makes it appear notioriously more disheveled by the end of the day. This detail-focused approach also manifests itself in the animation – relatively low motion, high expression; Kumiko shows hesitation after having pushed hard, Reina retreats to herself feeling embarrassed. I wouldn’t be surprised if Maruki was eventually promoted to character designer – which would be fantastic, except for the animators who would have to draw his intricate art. They have survived Futoshi Nishiya for years though, so they would probably be fine!
And as you might have heard, this was also an animation direction debut of sorts. Akiko Takase worked as Maruki’s assistant, kind of a ritual at the studio – and also the industry as a whole, albeit not as regularly – before fully being promoted to key roles. She only joined the industry 3 years ago, but her career is nothing but leaps; straight to key animation once hired by KyoAni, character designer and illustrator for Violet Evergarden’s novel, supervision of its amazing PV – meaning that yes, technically this wasn’t her debut – and even trusted to do some staff commentary for blurays. Her gorgeous drawings have always made her stand out, so working alongside someone like Maruki while furthering her relationship with Ishidate (presumably Evergarden’s director) seems like a perfect development. She’s definitely a name to look out for.
The production of the episode was otherwise relatively normal. It’s amusing to see the key animator count already down to 5 after the peak last week, but that’s KyoAni for you. We might see a notorious increase next week – since Animation DO needs to stabilize as well – but they seem to already operate as the studio usually does, which means totally unlike the industry as a whole. It’s also funny to see popular anime fan mentality being challenged by the episode – pool episodes are infamous (for a reason!), but this one comes from a mainstream novel written by a woman, and 4/5 of the key animators were women as well. I generally don’t point this out when it comes to specific KyoAni episodes because the studio always has more female animators, but that’s an amusingly heavy percentage for what is usually perceived as men’s territory.

Next week we’ll have an Animation Do episode, a relatively lesser outing but with the reliable Yamamura in charge. Look forward to that while you get ready for the studio’s actual monsters arriving on episode 4-5!

I’m happy to see Maruki getting some recognition. No one ever seems to mention him. He’s probably KyoAni’s best AD at the moment from what I’ve seen.

He’s valued within the studio at least, he wouldn’t have been chief animation director without having done designs otherwise! I always prefer ADs with a strong personality so he’s been one of my favorites for a while.

Even among sakuga fans, no one really talks about Maruki much. I wonder why? He’s been a favorite of mine, since his first episode as a full AD (Nichijou 25, which coincidentally was also a Takemoto episode).

I think there’s a couple of reasons: 1- Maruki’s style is very noticeable but more quiet than some other ADs at the studio. Akitake has the wildest movement, Ueno is rather flashy, Horihori was a cartoony master that filled drawings with more life than anyone else, those are the kinds of ADs that people tend to bring up. Someone more lowkey seems less likely to stand out, even if he still has tons of personality. 2- Some ‘sakuga fans’ despise the studio to begin with and don’t really know their animators beyond Kigami/Ishidate. This applies to western ones and JP… Read more »

Speaking of Ueno, I think she was the one who trained him (he was her assistant on Nichijou 20) if I recall correctly.

Ueno’s reliable like that. She also appears when other people need help sometimes.

I think that’s one of the reasons why many people consider Ueno to be KyoAni’s top AD. Not only can she do great work, she can do it fast. For example, she did key animation in all three of her Nichijou episodes as AD.

Also, from what I’ve read, I think Ueno is going to be the animation director on Episode 4. And that episode will also be storyboarded and directed by Taiichi Ogawa, another one of KyoAni’s young talents.

It will be interesting to see how can Kyoani change anime viewer’s impression on “that” character in ep.4-5.

Also, Episode 3’s going to be interesting. Takuya Yamamura is storyboard and directing the episode, and Kazumi Ikeda is the episode’s animation director. So we’re going to have our first Animation Do episode of the second season.

BTW, did you read this article yet? http://fightingfornippon.com/sound-euphonium-s2-episode-2-anime-review/

I hadn’t read it, but I’m happy more people are intertwining thematic reading with acknowledging the work of individual staff.

I meant did you notice what he said about the staff. He says that Ishidate is just as much to credit for the episode as Takemoto is. But he agreed with you by saying that Maruki was the real star of the episode.