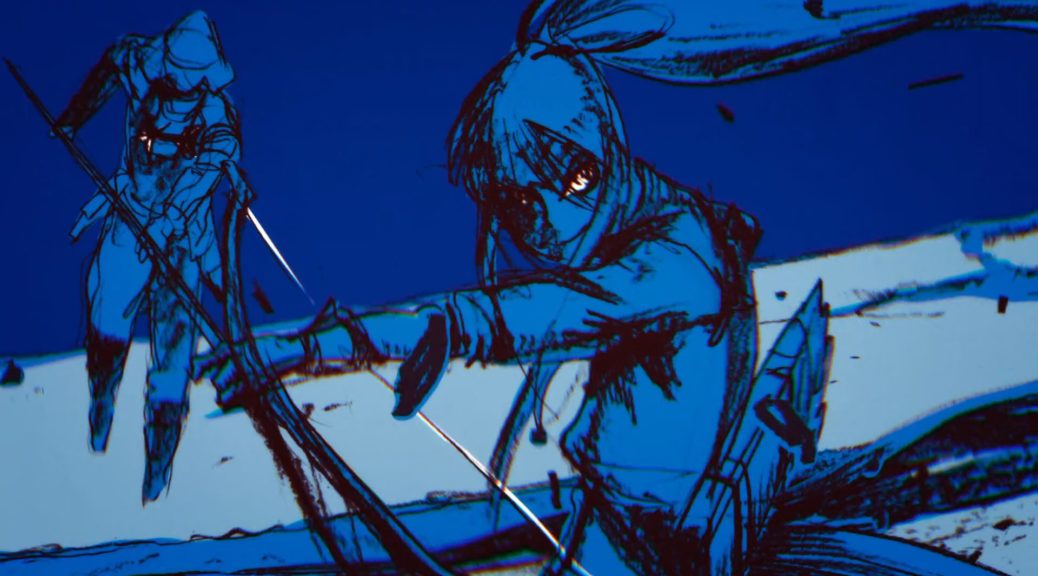 It’s time to learn even more about this season’s most impressive opening sequences – and endings too, we don’t discriminate over here.

Sangatsu no Lion had the duty to feature strong intro and outro sequences, due to the franchise’s ties to BUMP OF CHICKEN. And while neither might stand at this season’s top, they’re more than satisfactory! What’s even more interesting is how they share a theme, with the ending being the more optimistic reply to the opening; the drowning imagery – present within the show to the point of perhaps being overdone – dominates the intro, and even when Rei escapes it he’s still trapped by his trauma and dragged back into the depths. The ending shows his struggle to leave the water again, but in this case he does manage to escape into the world of light and color. I feel like they’re stronger as a whole, but if I were to choose one of the two I would definitely go with the opening. As much as I’m a fan of Ryousuke Nakamura’s work, the somber intro is visually more impressive and features way stronger animation.
Believe it or not though, it wasn’t handled by an accomplished director at all. Naoyuki Asano is a solid animator who only recently joined that field; his only previous experience was with the lively Osomatsu-san openings, a show that represented his jump to fame since he was also in charge of the character designs of the megahit. The animation focuses heavily on FX cuts so it’s easy to see why names like Hironori Tanaka, Nozomu Abe and Tomohiro Shinoda populate the key animation list. Quite a lot of freelance talent in general, Asano even brought people you wouldn’t expect to show up at SHAFT like Shintaro Doge and Atsushi Saito. Strong lineup for a strong opening!

The most inventive 2D animation this season comes from an opening sequence for a short fully 3DCG anime, because that’s how anime rolls. Kenichi Kutsuna – who also serves as the show’s assistant director – is a name that might sound familiar to animation fans, since he’s a young digital artist who tends to hang out with the industry’s top webgen animators. He seems to have sided with ryo-chimo’s faction and decided to try to advance digital 2D tech by learning to work with 3D, an approach that might be interesting as long as he doesn’t end up abandoning the former. If it leads to more pieces like this, it’s entirely justified.
You may have noticed that the artists are credited with a non-standard credit. There’s a reason for that – none of them work on commercial anime, and the group includes people who don’t even produce art that could be qualified as key animation; from Geidai graduates to independent artists earning a living by producing music videos using stop-motion techniques, there’s quite the range in this short list. Kutsuna deliberately sought indie creators with different backgrounds, since the variety of approaches is integral to the sequence. The surroundings keep morphing under the hand of different artists, creating different worlds to explore – this is truly Chi’s Sweet Adventure!

While Flip Flappers’ opening has its flashiest animation and the most clues about where the narrative may go, the show’s spirit hides in the ending. The fairytale theme blatantly takes the form of Hänsel and Gretel here, as the main duo gets lost in the woods and finds an edible house… which turns out to be a witch’s trap they can barely escape from. The contrast between the cute yet macabre illustrations – which might have some thematic hints as to where the show is heading – and the adorable animation loops is perhaps the best part. While the story on top is a rather straightforward take on the tale, the animated cuts actually portray the girls’ true personalities; it’s Cocona’s act of courage that saves Papika, but we can see her panicking while fleeing.
Kiyotaka Oshiyama was in charge of all the animation, bouncy movement that makes the short cycles mesmerizing and adorable – well, mostly. The drawings themselves are rather cute as well, as you would expect from tanu’s art. I find it rather amusing how this show keeps getting linked to Rolling Girls, its less fortunate colorful original anime cousin; not only do they share Kitada as their main animator, even tanu is the official illustrator for both series. Let’s hope their fate differs!

Excitement for DRIFTERS‘ intro had built up before any footage was shown, since Cédric Hérole himself revealed he was in charge of pretty much the entire opening. The versatile French animator’s work is excellent, a rough style that I would call key animation aesthetic – it’s obviously not that, the footage is properly inbetweened by Hérole himself, but it does mimick the look of unfinished yet really cool animation. The whole thing feels more like a music video than a regular opening, particularly so with the amusing lip sync singing moments; there’s some room for humor even in such a bloodstained sequence.
The simple color work is eye-catching as well, and stands out when compared to a show that is otherwise allergic to vivid colors. And speaking of which, there comes my one issue with this opening: the virtually still shots that actually do fit with the show’s regular aesthetic – coincidentally the one thing Hérole wasn’t in charge of. They clash with the rest of the sequence in an unpleasant manners, and do the flow no favors. The director Michiya Kato and his studio Cyclone Graphics are actually a favorite of mine, thanks to unknown gems like Nandaka Velonica and their digital work on projects like Kizumonogatari. A bit of a misstep this time around, but nothing that will make my love for them waver. Minor nitpicks aside, this is an opening that quite literally screams COOL.

Since we’ve been looking at sequences with minimalistic credits, how about one with no animators whatsoever? There’s a trick of course – this is yet another placeholder opening edited by Nobutaka Yoda at 10GAUGE. I feel like their work is worth talking about, since the company has been around for many years yet their rise to prominence in TV anime is still rather recent. The studio does all sort of digital work, from logo and UI design to photography assistance, but editing is definitely their forte; you’ve seen their motion graphics on excellent sequences – like Mob Psycho’s last season – and they handle promotional videos frequently, but more to the point, they’re also trusted with recycling in-show footage to put together placeholder openings. They’re no magicians of course, if only given poor footage and no cohesive ideas then there’s little they can do. As sequences like Bungo’s show though, with few resources and a theme like the neon lights to back it up they can craft an opening that puts many ‘real’ ones to shame. 10GAUGE have somehow become the official AMV producers of the industry, and they do a fine job at it!

And that’s as far as we’ll cover, though not due to a lack of material. While talking about solo animation sequences there’s more I would have liked to mention – both opening and ending for Fune wo Amu were key animated by a single person, and while it’s one of his lesser works, Ryouma Ebata’s opening for MahoIi S2 still has plenty of his stylish movement. Yoshihiko Umakoshi also put his visual charisma on display when fully drawing the Tiger Mask W ending, and Rie Ooshima made murder look cute with her Nobunaga no Shinobi intro. Even going back to more traditionally produced offerings, Haruka Fujita’s debut with the Euphonium 2 ending shows both her influences at the studio and personal voice through a very cute sequence. Focusing on this for three weeks felt like going overboard though, so this miniseries will end here. I’ll gladly do something similar if we get another unusually strong lineup of openings and endings!

And next time… I might actually tackle a fall show. Or it might be something entirely different. Apparently the trick to surprise the audience is surprising myself first, and I genuinely have no idea what I’ll decide on. So much to choose from!

I just marathoned Bungo Stray Dogs with my friends, and they enjoyed the special opening sequence quite a bit ^-^ (The video has been removed btw) The anime’s execution went above and beyond the source material.. glad to get to know the company behind that opening. Thanks for posting!