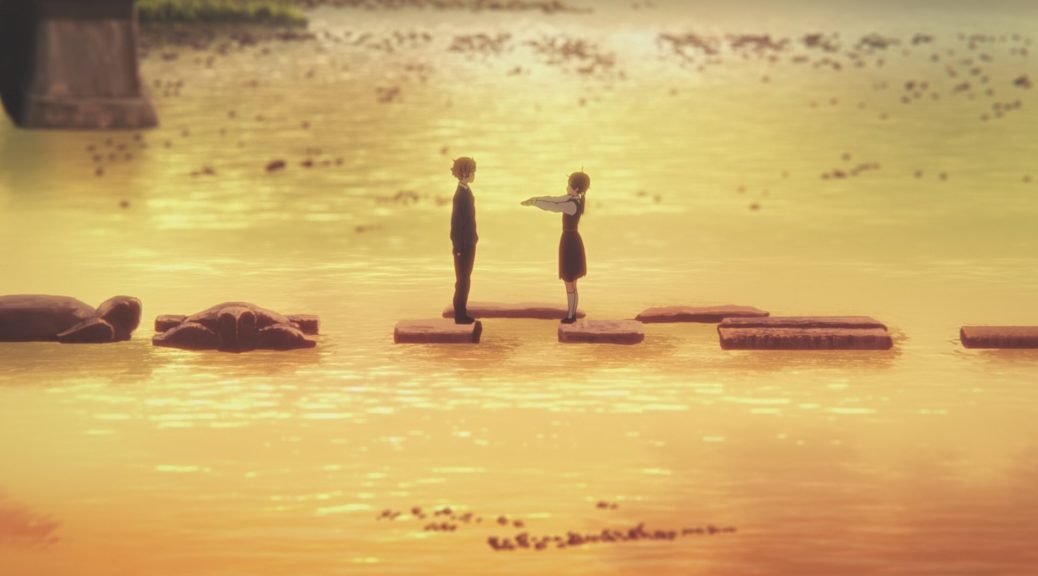 Our friend megax is back once again with more Naoko Yamada related translations, this time in the form of an interview with Yukiko Horiguchi – someone she deeply trusts, as she was the character designer for her first projects.

Hello again and welcome to the newest translation in “Yamada Season.” Once again, we take a look at a Naoko Yamada work from the perspective of one of her very close colleagues. In fact, they’re so close Yamada once tried to fit into her pockets! The character designer/chief animation director position is responsible for conveying a character’s personality and thoughts through various design features/movements. One of the absolute best at character acting animation was Yukiko Horiguchi, Yamada’s partner-in-crime for K-On! and today’s translation topic: Tamako Love Story. Enjoy.

– When you first heard the theme would be of a “love story” how did you picture it?

There have been live action love stories, but had there been an anime with simply a pure romance theme attached to it before now? Along with thinking about that, I felt it would be a very enjoyable subject and something worth working on.  To begin with, I love shojo manga, so this type of dish is my specialty! (smug smug) Just kidding. (laughs) I genuinely looked forward to working on it. I was incredibly embarrassed when I read the scenario for the first time. It had some kind of “teen love” sense in it. Even though I was embarrassed reading about it, I wanted to dash forward into working on it.

– What kind of emotions did you experience working on this film?

I was able to have a lot of animation directors working alongside me from the very beginning, so, strangely, I didn’t get stressed out. It was nice to be able to leverage each of their own specialties while I worked on the entire film. I mainly focused on building up the protagonists and protecting the habits of all the characters.

– What was your favorite scene in the film?

In general, I liked the parts in the middle portion of the film right before the story begins to conclude. I thought the parts where the mood between Tamako and Mochizou is a bit stressed and she’s worried while everyone is going through a rough spot was really nice to watch. Also, the scenes where the ambulance arrives and Mochizou says “I’m going too” in such a manly voice and when he tells Tamako “Go ahead and pretend it didn’t happen” had my heart racing like I felt Tamako’s was. 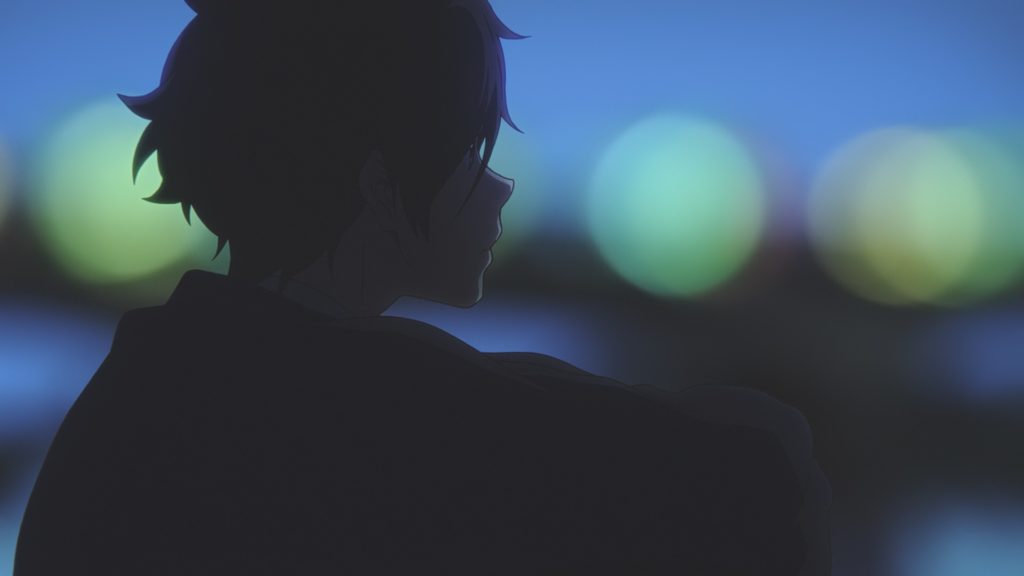 Tamako’s appeal or rather that liveliness

– What did you concentrate on when designing each character?

Since Tamako wasn’t designed to be a girl for someone to fall in love with in the TV series, I re-designed her while keeping that new purpose in mind. Her bangs became calmer, the amount of colors used on her was reduced, and generally she felt more mature. Since her proportions in the design materials didn’t change from the TV series, I would extend them to match the storyboards while we were working. Also, each character was brushed up a little for the movie. This was especially true for Tamako as the director wanted her to look more modern in the footage.

Actually, Tamako’s eyebrows are neat in the movie, but while working on the flashback scenes, they became thicker. I felt it would be nice to make her a bit more unkempt as well. Since we constantly saw her in the TV series, it was very difficult to imagine a lovestruck Tamako, but I kept drawing and was eventually able to visualize that expression on her.

There was a request from a unit director to bring out the differences in bodies between men and women.  For example, in episode 5 of the TV series, Mochizou is depicted as smooth around the stomach, but it feels like his ab lines are inserted in the movie.  Even though there aren’t any undressing scenes in the movie (laughs), I still wanted to depict him as a boy that’s grown up physically in the movie.

Midori originally had her barrette on her right side, but since there were many instances where it was shown on her left during the TV series, we attached it on both sides this time around. With the use of little tricks like the way we drew her eyes, Midori became cuter than ever before in the movie! There’s a lot of portions where you want to cheer her up. Just watching her feels heartbreaking. You truly want her to become happy.

When you watch this movie for the first time, your eyes are obviously drawn to Tamako and Mochizou, but I think if you watch it again and pay attention to Midori that time, I think you’ll feel more emotionally moved.

Kanna is a girl who won’t be swayed away from goodness. Isn’t that the most charming thing about her? She’s a completely relaxed girl. Even though it’s a movie, we didn’t have any special problems with Kanna. That’s just how working with her goes.

Originally, Shiori was supposed to have this cool image to her, but this time we softened her expressions.  Since Tamako and Dera helped open her heart up to others, it feels like she doesn’t have to protect herself with that cool expression. The version of her in the key visual has a really nice expression.  As her spot has turned around from the TV series, hasn’t she become a character who helps guide Tamako?

Anko is great! (laughs) Anko often appears to have grown a lot to be similar to an older sister from how she appeared in the TV series.

This time when I saw Anko, there was a certain uproar inside me where I was shocked. “Hasn’t she fully grown up?”….. (laughs) I really like her personally. Especially the scene where she wears Tamako’s middle school uniform. That sailor uniform. I was very excited since I think it really suits her.

There are many sides to Anko, but this one features her calmly watching over Tamako and Mochizou. Not too close, not too far, but she wants to watch them grow up together. 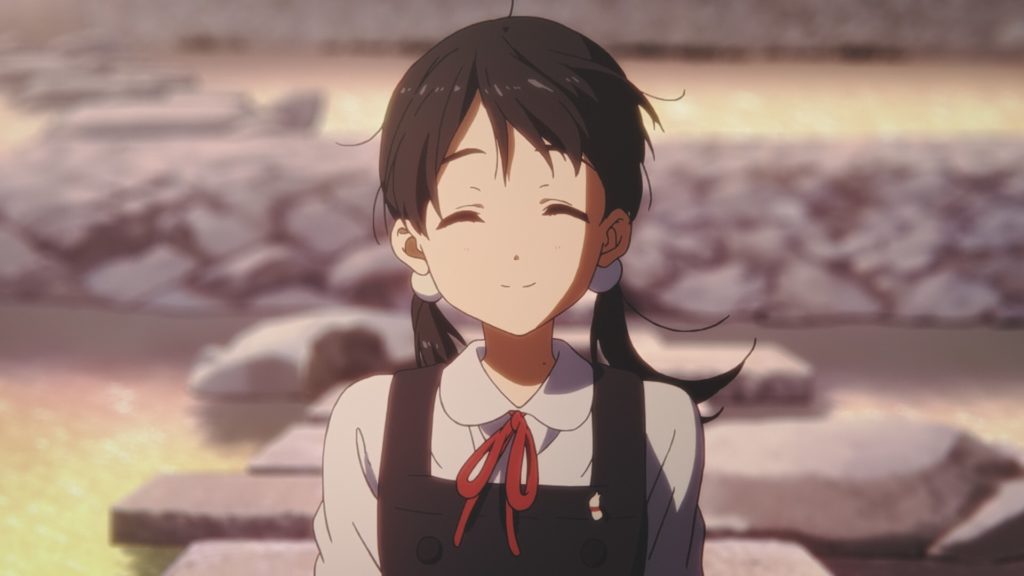 – What did you talk with the director about for this movie?

We talked about how she wanted to be conscious of it feeling like it was a live-action atmosphere. Also we talked about wanting to make Tamako feel important so we re-wrote her backstory in parts where we wanted to be in her point-of-view or when we wanted to delve into her character. Also the director’s obsession with Mochizou’s girlish long-sleeve shirts came out!

– What were differences between this film and working on the TV series?

The TV series had an easy-to-understand anime-ish or manga-ish feeling to it that came out, but it was more important that this film have a “live” feeling to it.

I inserted some innocent components in the teaser visual with Tamako like her expression having strength (towards love) and anxiety.  She may look like she’s ready to flee a bit, but I also drew forward-facing portions like how her jaw is angled.

– Please give a message to all the fans who have come to the theatre!

It’d make me happy if your heart throbs alongside Tamako’s. Also I think you’ll be fascinated with Tamako worrying about love and her future like an ordinary girl and Mochizou thinking about other things like moving forward with his life and not just in a year-long daze over Tamako.

If you say “That was embarrassing, but it was really good” after seeing it, then it’d make me happy.