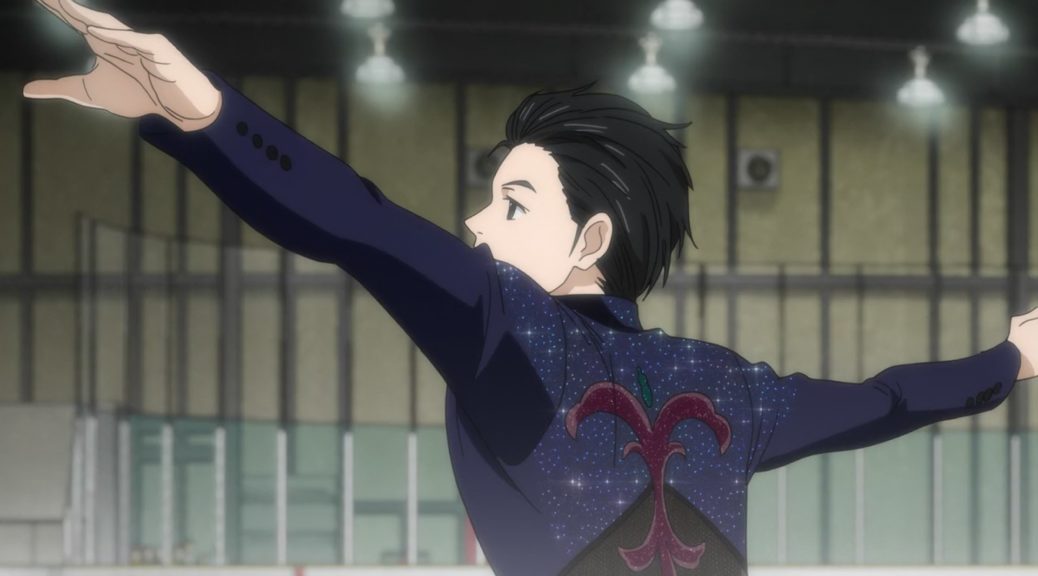 Chacott’s series on Yuri!!! On Ice’s design work returned, so here we are again. Translated by Good Haro as usual. 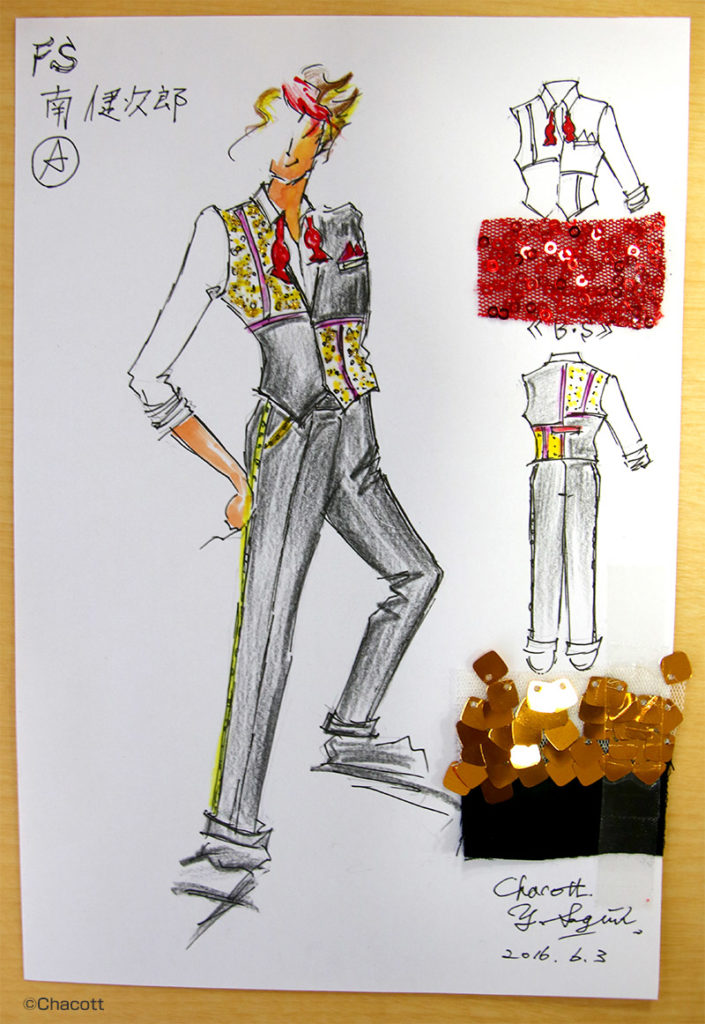 Let’s start off with Kenjiro Minami’s free program costume. How do you feel about it?

Thinking back on it after I finished all of the costumes, I think it’d be the easiest to actually make.

Good point. Was there a reason for that?

Probably because the instructions I got from Ms. Yamamoto were the simplest compared to the other costumes––“He’s tiny, bursting with energy, innocent and sweet, and he’s just made his senior debut.”
Based on that comment, I came up with two designs: a suit variation and a vest variation. I opted for bright, lively colors since he’d have that shock of red in his hair either way.
One of the key features of the vest design, which the anime adapted pretty literally, is the use of red details. I also opted for bigger sequins to complement the pop music he’d be skating to. The untied bowtie is meant to give him a bit of an unpolished feel.
“Did you catch that during the awards ceremony in the anime he has his bowtie tied? Well, if this were a real costume, it’d be stitched in place as-is, so you wouldn’t actually be able to do it up like that.”

I saw the sequin fabric you were talking about in person. It’s so sparkly!

It really is. When you lay it flat, it doesn’t look like much, but when this fabric wraps around the body, the sequins all hang at slightly different angles and catch the light. It’s quite effective.

Even the hem of his pants sparkle!

Yeah. His pants are cuffed at the bottom, but this actually wasn’t a design concern so much as a practical one so that the sequins wouldn’t get in the way.

His sleeves are rolled up too, could they be unrolled? 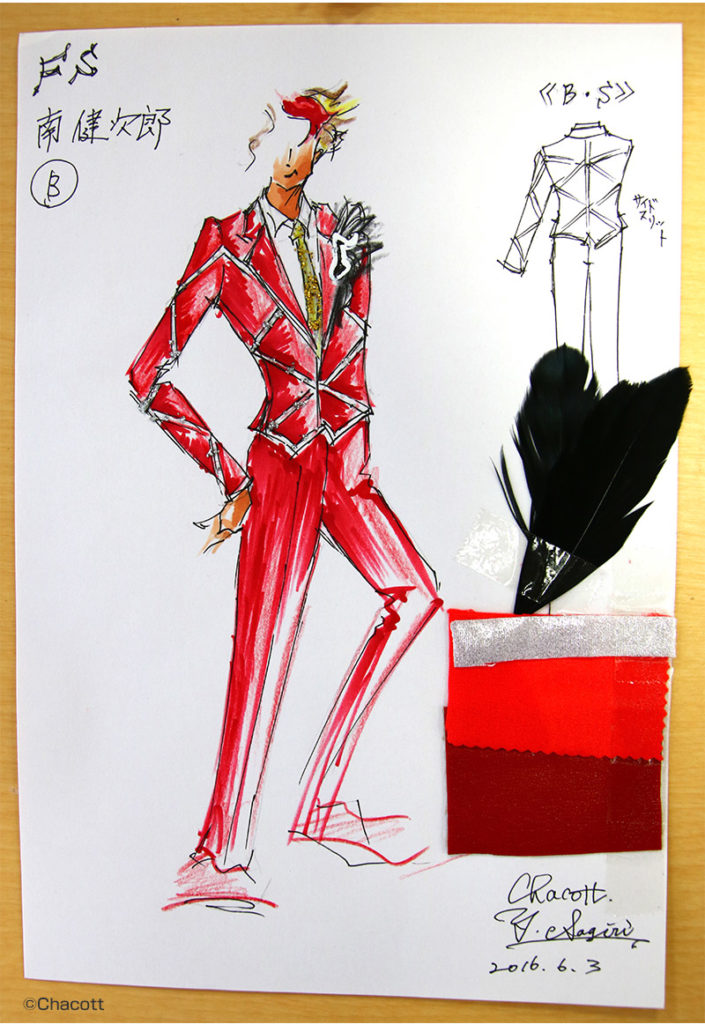 A more mature suit jacket styled costume. In this version, the whole thing was red and the key detail was a gold necktie.
Since he’s so small, I went with a geometric design on the jacket to draw the eye to his upper body. It would have had a feathered, musical-note broach on the chest as well.

On to Yuri’s free program costume. In the episode, Victor says, “you really do look your most beautiful in this costume”! So what are the highlight of this costume?

I really think the jacket style suits Yuri better than the bodysuit look. For his free program outfit I really wanted to emphasize his strength and masculine charm.
The top is styled like a jacket, but the fabric is a thin, two-way stretch material.
His chest is deliberately exposed quite a bit and to emphasize his slim waist, I used a mesh fabric there, creating a vine pattern with rhinestones. In real life, it’d be lined with a beige fabric so it’d look like you could see his skin through it, but I think that was a bit too difficult to get across in animation.

The front hem of the jacket is a bit longer, isn’t it?

I figured Yuri knows he has a nice butt, so I deliberately made it shorter in the back. 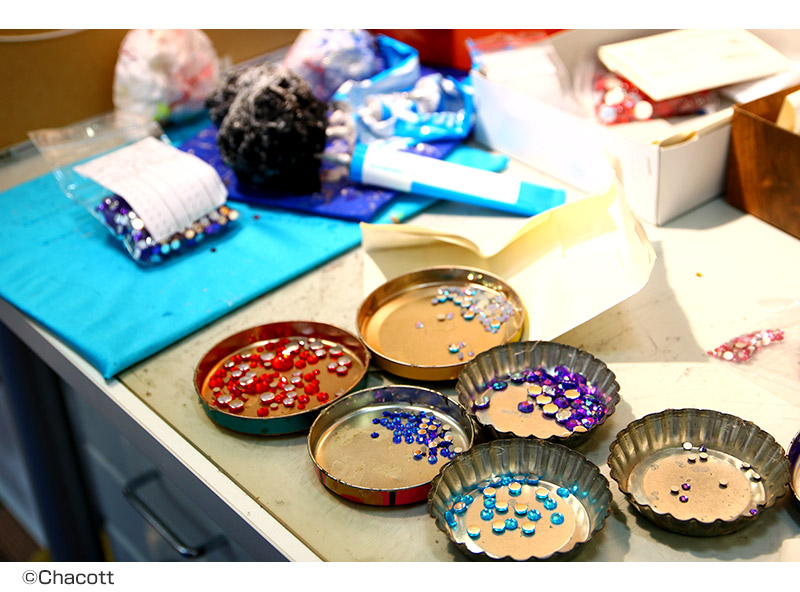 How are the rhinestones applied?

They’re glued down one by one. It takes a lot of work (lol).
We use a lot of stretch material in the costumes we make here at Chacott, so we apply the stones while the costume’s on a mannequin in that case.

They just happened to have a dress in the studio in the process of having rhinestones applied, so I got to see how they’re actually applied!

Apparently the specific procedure varies a bit depending on on the craftsperson, but generally either:

1) A stick with pine resin or another similar material on the end is used to pick up one stone at a time, the glue is applied and then attached to the costume.

2) The glue is applied to as many as five spots on the costume first and then the stones are applied one by one with the stick. 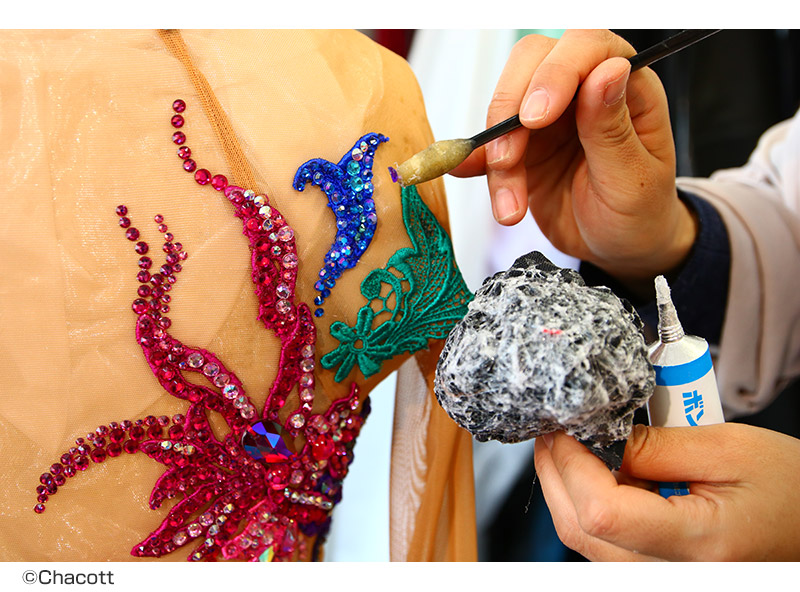 Now, I was curious about what the other item the craftsperson was holding was. Apparently, it’s tulle scraps, used to clean up dangling strings of glue. All of the glue it collects throughout the process turns into a hardened lump of tulle. 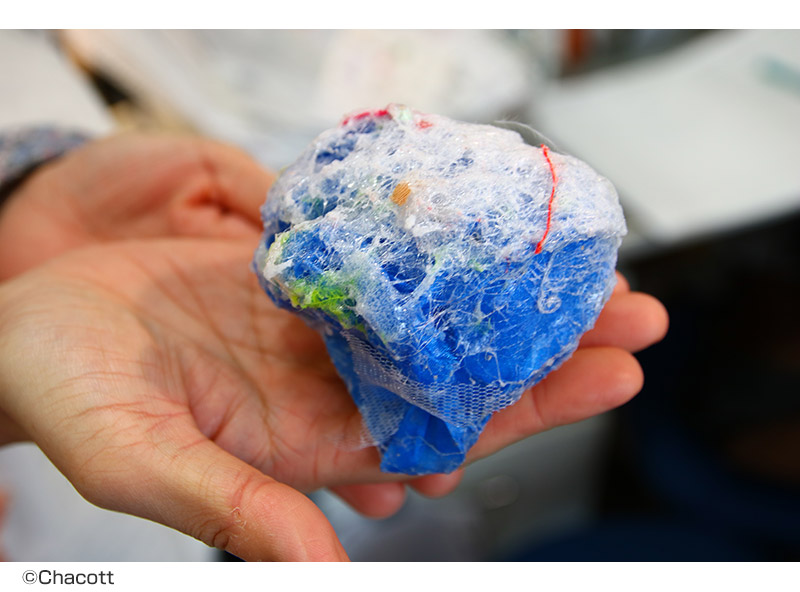 There’s no rough drawing or anything for the pattern is there?

Nice catch. It’s not uncommon for the craftspeople to apply the designs free-hand while looking at the design sheet, but when using a transparent fabric like this, sometimes we’ll slide a rough drawing of the pattern underneath.

And that’s it for this installment. You even got a little bonus lesson in how rhinestones are applied. I think we’ll be trying to do a little more of that going forward. Until next time!