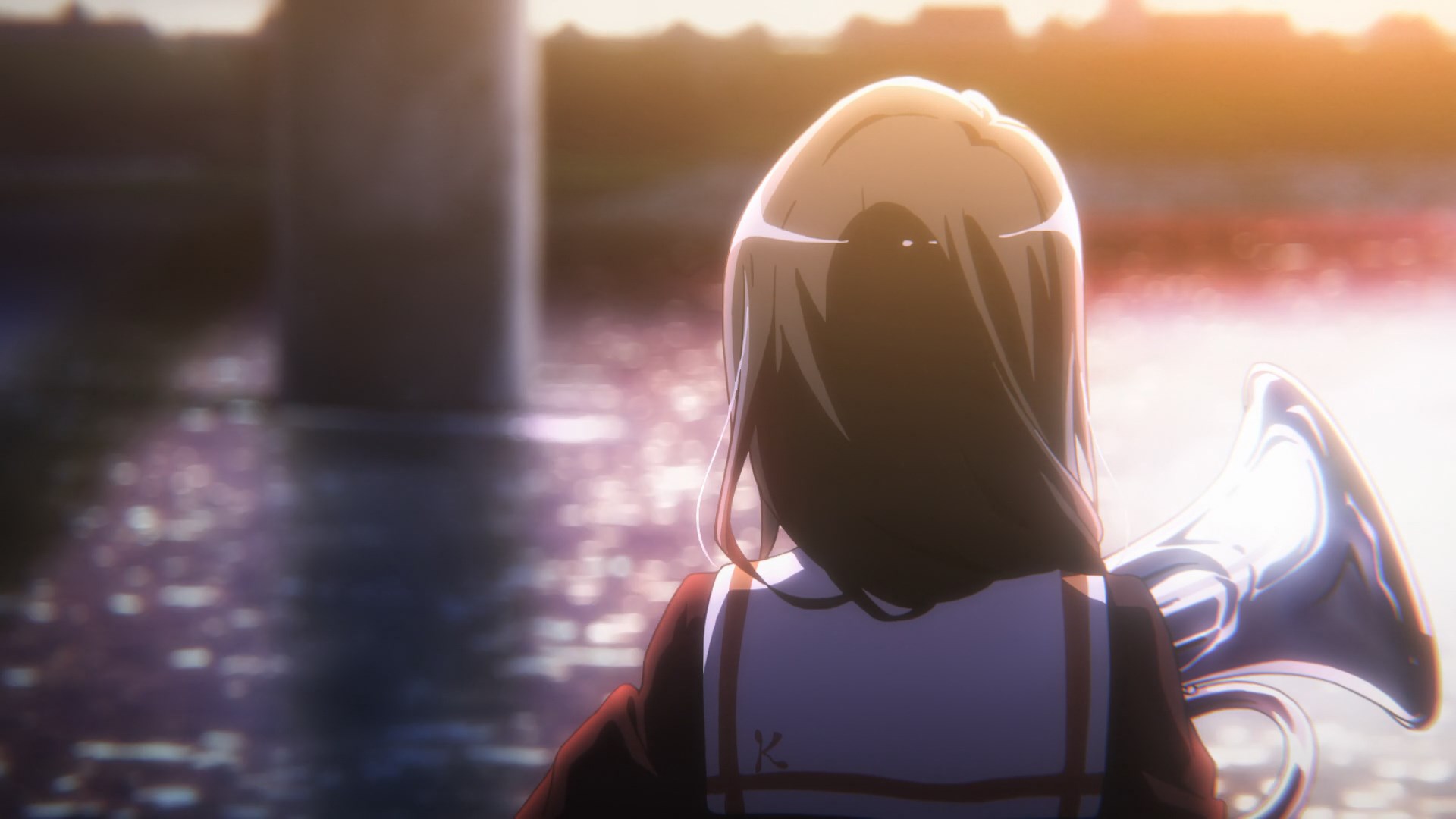 The most satisfying episode this entire season, as well as fantastic news for the studio’s future – and perhaps present already.

Many alarms were ringing before this episode. Titledrops are reserved for important moments, and it was finally time to tackle Asuka’s situation which had been hinted at for almost two seasons. On a production level, it was the first chance for one of KyoAni’s star directors to handle a full episode; Taichi Ishidate had been too busy to do anything but draw some key animation during the first season, and so far his season 2 output had been limited to direction on a light episode someone else storyboarded, which had restrained him from both narrative and creative standpoints. This was the big opportunity he was presented with and he had no intention of wasting it.

The episode is a stream of expressiveness from beginning to end, taking on different registers but always conveying lots of emotion; whether it’s a static shot portraying Kumiko’s worries simply by contrast to her friends’ poses, an obscene display of rich motion, or Reina’s silent realization about Taki’s relationship – this last one was bound to happen, and I appreciate her relatively calm reaction to it. Reina might wish to be a special being, but she’s a smart girl who deep inside was always aware her crush for a teacher didn’t have much of a future. All that’s left now is for her to get it out and move on. 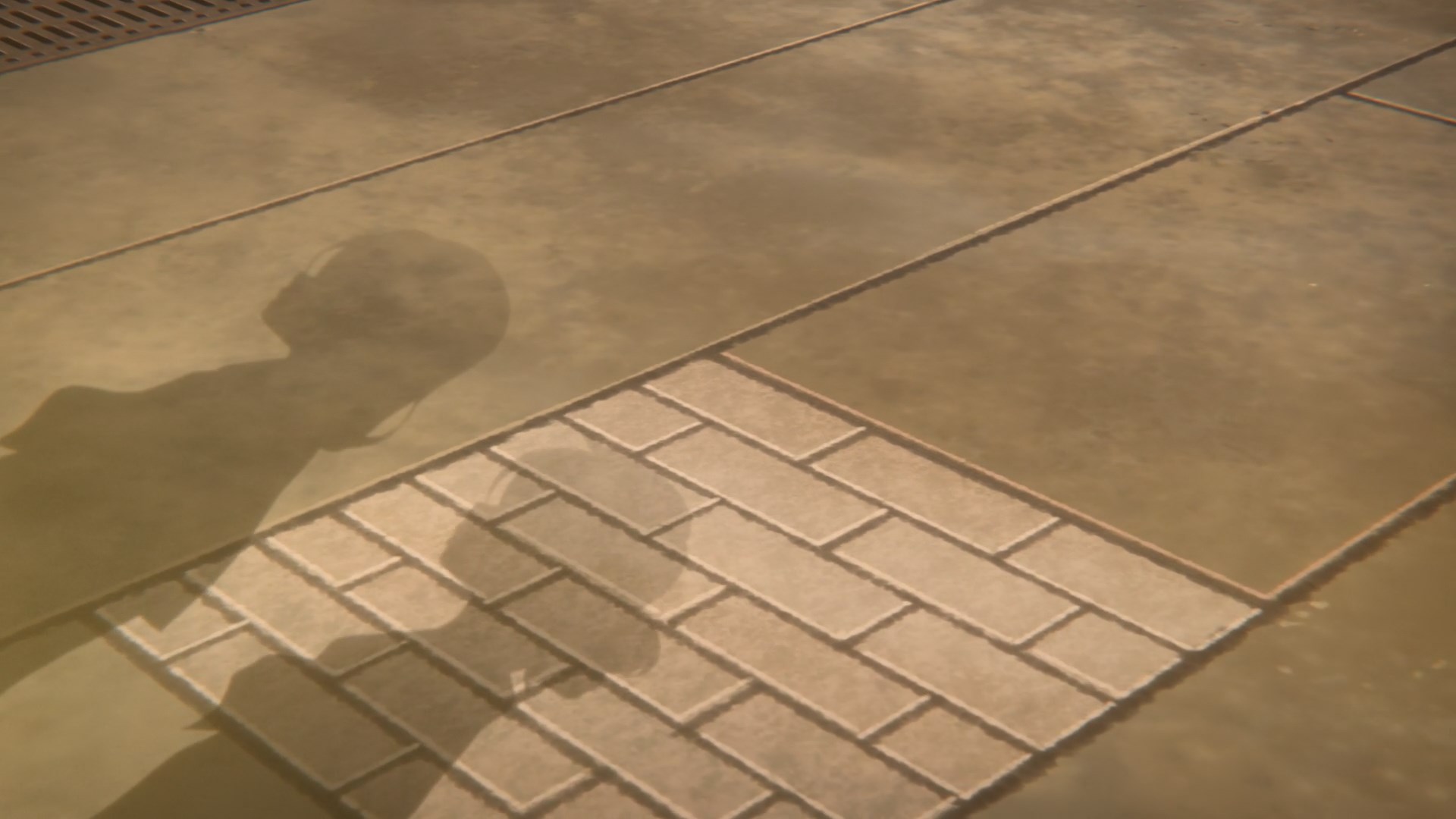 But Reina is simply a guest in this episode, which takes Kumiko on a quest to convince Asuka’s mother to allow her daughter’s return to the band. A half-baked plan conceived by her surprisingly silly upperclassman that crumbles immediately, since her parents aren’t around. Neither of them, as Kumiko comes to know that they got divorced many years ago, and that her father is none other but the famous euphonium player whose music and books have been appearing throughout the series. Both of them share a link of sorts, since they were introduced to the instrument by the same person. In Asuka’s case it was through a package sent by her missing dad, containing a letter, a notebook with the song she’s been playing all along, and of course the euphonium itself. That was the moment she discovered the joy of performing, but also the beginning of a conflict with her mom who firmly opposed her playing. An awkward position that somehow stayed in stalemate for years, until Asuka saw her dad would be one of the judges for the Nationals and let her grades slip after getting overly anxious; the flashbacks are effective for once here, reminding the viewer of Asuka’s weirdly motivated speech from a few episodes back, finally giving context to a moment that felt off.

This long and tense conversation is elevated by the ludicrous care put into the episode. Even something as casual as Kumiko’s legs falling asleep is more than an amusing relief; Asuka’s home is very Japanese in style unlike Kumiko’s, who isn’t used to sitting traditionally and is shown to be uncomfortable throughout the entire scene. You could link that to the strictness of their upbringing – which Asuka clearly rejects – but even if that isn’t fully intended, moments like that give lots of texture. Some shots might even go a bit overboard with their attempt to convey information, like this sequence that shows Asuka overwhelming Kumiko rather literally. This is no surprise – Taichi Ishidate isn’t as naturally delicate or subtle as other directors at the studio. He’s an action and effects animator at soul, whose undoubted character acting mastery seems to come more from the fact that he’s stayed at the company for a long time, rather than something he would naturally develop otherwise. Even when it comes to his hobbies, he’s more likely to end up watching a bombastic Hollywood film than some of his peers, who would instead seek arthouse cinema. But that obviously doesn’t make him a hopeless brute. He has a spectacular sense for color, which is only developing further with the advances of anime postprocessing. Asuka is wary of her friends meddling with her delicate situation, but she’s also aware of Kumiko’s presence as an actual euphonium who supports the band. Her complex problems weren’t going to get fixed overnight, so all she secretly sought was support, someone who wants to listen to her personally to find the joy she got playing as a kid. Once Kumiko passionately offers that, Ishidate immediately alters the lighting to depict the warmer mood. The gorgeous final scene feels like a celebration he definitely earned.

But as spectacular as Ishidate’s job was, when it comes to the staff someone else stood out even more. I can’t stress out enough how exceptional Akiko Takase’s full debut as animation director was. As I mentioned a while back when she had her training episode, her career has been progressing unusually fast to begin with; she graduated from university in 2013 and joined Kyoto Animation later that year, going straight to key animation for rather important episodes. She must have taken a liking to skipping steps, since she was also trusted with not only the novel designs but also the promotional video for Violet Evergarden, before joining the roster of animation directors at the studio now. Her debut episode would be praiseworthy for an ace animator with decades of experience, let alone a young newbie. The obscene level of detail rivals the studio’s supervisors who excel in that field, but she clearly values motion as the root of expression in animation, as proven by the numerous simply excellent cuts. I get the feeling that Ishidate himself at least did the rough drawings for the incredible scene between Kumiko and Reina, and its similarity with another perfectly eloquent sequence after that makes me think they shared the same key animator – perhaps Nobuaki Maruki. The consistent excellence of the episode’s animation definitely proves Takase did an excellent job with her corrections either way, keeping it all lively yet absurdly polished. Every now and then, KyoAni’s endless cycle of talent growth births a veritable animation monster, and it’s starting to feel like Takase’s case is the most exceptional one since Yukiko Horiguchi’s irruption.

The effectiveness of the Ishidate & Takase duo is of course significative beyond this episode, since they’re bound to be the core staff of the upcoming Violet Evergarden anime. Under normal circumstances the project would require a more experienced animator to handle the character designs and chief animation director role for the full production, but with Takase having proven herself I feel like that might not be needed at all. If this is what she can pull off with only 6 key animators then yes, she’s definitely ready. Bring it on.

For once we know nothing about the upcoming staff, so I’m going to hope for something more restrained again because I need a break after this ridiculous episode.

This episode was another gem, such splendid animation that elevated the emotions and atmosphere. Not only a true feast for the eyes but the it elevates the whole viewing experience by making the animation a center piece to emphasise the character’s vivid & subtle emotions, their interactions.

I was talking with someone about how episodes like this really embody the idea of ‘character acting’ in anime. The animation perfectly articulated their feelings, and the VAs did a top-notch work as well. Add to that the layouts conceived by someone who is very much an animator (the cut with Reina walking backwards makes that very obvious) and you get something that looks fancy without sacrificing expressiveness.

So Akiko Takase made her official animation director debut with this episode.

First I thought she wouldn’t be given the chance to use her designs on the Violet anime. After her PV and showing up as assistant I realized she could very well be the designer and part of the AD rotation. And after this episode… I’d believe it if you said she’ll be the chief animation director. Someone like Maruki still seems more likely for that, but she’s clearly ready for anything.

Like you said, the fact that Takase was trained under someone like Maruki (she was of course his assistant on Episode 2) could only be of great help.

Another amazing I just noticed is that when Asuka was talking to Kumiko about her mother. She reached out to one of the cookies but then she stopped and took another one instead. She ended up not eating it and keep holding it for the entire conversation.
This clearly portraits how she was forced to do things she didn’t actually want <3

Asuka’s demeanor is rich in a way that doesn’t even require lots of motion (though she benefits from particularly strong episodes like this too of course), her actions are just very deliberate.

I was curious who was behind this episode because the quality of the animation and strong storyboarding set it apart immediately. Glad to see Taichi Ishidate getting some much deserved praise because most critics seem to look down on him for directing Beyond the Boundary. Sure that show had flaws but its high points were extremely strong and the movie is among the top tier of what KyoAni has done. He’s already proven himself as a great animator and here again as a great director. I’m super pumped for Violet Evergarden.

That’s one of the issues I have with approaching directors by looking at their titles and not what they did with them. Ishidate was doomed from the very beginning while having to work with that material, but his episodes have been very impressive for quite a while. In fact, the actual downside to him becoming a series director is that we get less of him on other people’s series! For a while he regularly directed everyone’s finales since he’s that trustworthy.

I put the blame for Beyond the Boundary squarely on Jukki Hanada’s terrible writing.