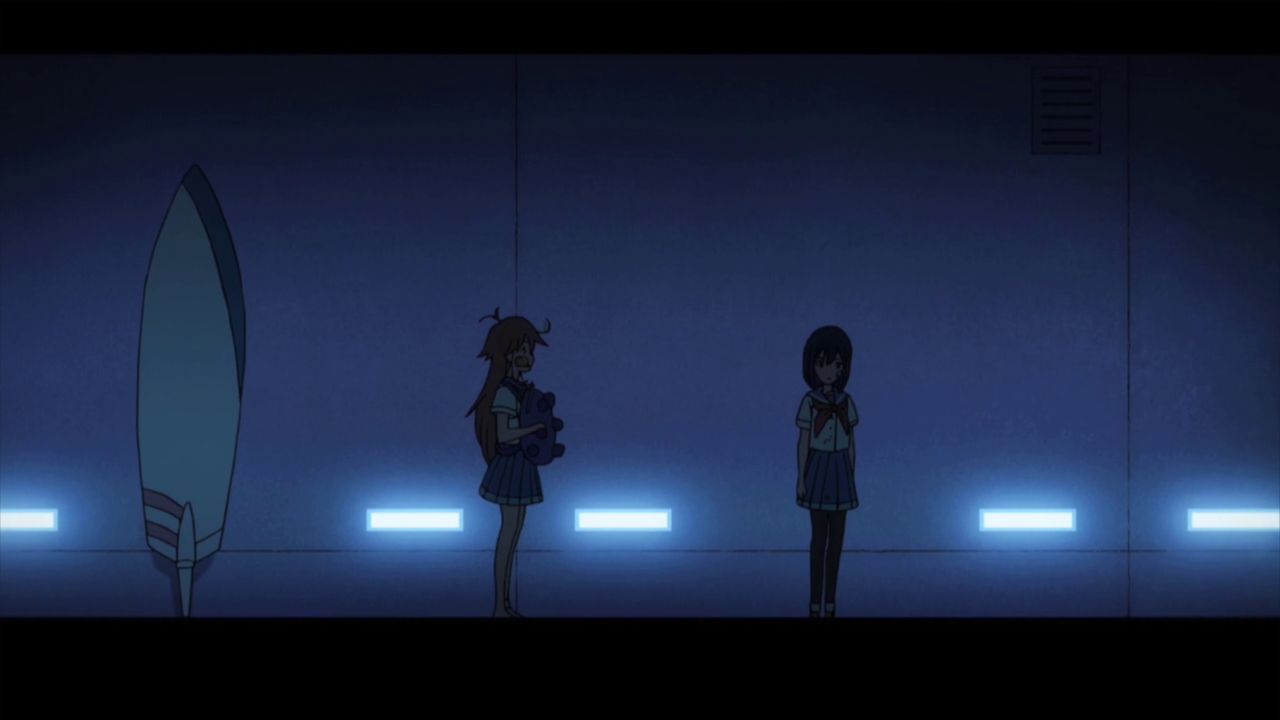 Goodbye fun weekly adventures, you were delightful while you lasted. The actual plot and overt narrative are taking the focus now, which means explanations, revelations, twists and turns that had to happen at some point. In a way, it was a standard exposition episode – as standard as a show like Flip Flappers can be anyway. I don’t think there was anything outstanding about the way the story was told and the same could be said about the visuals, which were up to the series’ high standards minus the explosive animation highlights often accompanying them. With that in mind, and considering every new reveal simply opened the doors to future developments, what’s there to be said about this episode other than running down the plot reveals which all of you who’ve seen the episode know already?

Let’s talk about series director Kiyotaka Oshiyama, who deserves lots of praise for what he’s done. As a top animator, his relationship with the series hasn’t quite been what’s expected from a director. Since the very beginning, it has been a well-known fact that Oshiyama himself came up with the ideas and rough designs for the inventive settings, environments and even objects populating them. He’s been doing key animation regularly (episodes 1, 4, 5 and 7), which is quite rare to this extent and requires additional time in the director’s already packed schedule. For episode 1, he did layouts for circa 100 cuts (quite a lot if you can’t tell!) which were then animated by character designer Takashi Kojima. Let’s not forget that he also animated the ending all by himself too, without even requiring inbetweeners. Usually, when a director decides to do key animation in his own show, it’s for the series’ most important episodes. A good and recent – though unconfirmed – example would be Susumu Mitsunaka’s breathtaking rotation in Haikyu Season 3′s finale. These are exceptions to begin with of course, and they can get pretty extreme. For example director Masaki Tachibana, with help of many clean-up assistants, solo key animated the entire final episode of his show Barakamon!

But back to Oshiyama. Reports from an event also revealed that he tends to not get credited for all of his drawings, contrary to the character designer and chief animation director Takashi Kojima, who gets listen even for 2nd key animation and in-betweens. That means Oshiyama probably did even more stuff that we likely won’t find out about unless it’s specifically mentioned. If we look at the more regular directional duties, he storyboarded episodes 1, 2, 7 and this one. His storyboards make excellent use of the settings that he himself created, as this episode once again proved; some of my favourite shots this time around displaying these fascinating designs include the very first cut of Papika sitting on spiral stairs, Mimi’s lonesome room and Papika(na)’s bizarre dwelling. Oshiyama clearly likes experimenting with angles and reflections, as shown in this cut that’s clearly using the same motif present in the opening sequence. It’s a bit of shame that Studio Pablo left the production, because while Inspired’s work at developing Oshiyama’s concepts is satisfying, it doesn’t quite live up to what the show had before.

The piece of animation that caught my attention in this episode was this weird morphing sequence of Cocona’s fake grandmother, not only because it’s a striking scene but because it relates to what I was talking about. The blobby shapes are very much like Oshiyama’s own and it really reminds me of his work from Doraemon‘s 2008 movie. Maybe we’ve got our hands on one of his uncredited works after all!

I’ve derailed this post a bit but I think it’s worth to appreciate the director’s work on this show. He really deserves it!

Is it true that Sakuga Blog is collaborating with Anime Feminist for the “Women in Sakuga Programme”?

Admin
kViN
Reply to  someone

They want more women to write about sakuga related matters, which is a nice idea as far as we’re concerned so we’ll be helping out newcomers… just like we’d help anyone in that situation who approached us, so it’s not really anything new for us.

someone
Reply to  kViN

You are making a huge mistake by getting involved with them, endorsing them, associating yourself with them, and helping them. Anime Feminist and their fellow travelers like The Mary Sue are trying to do to anime the same thing feminists have already been doing to video games, comic books, movies and anything else they can get their hands on. They are trying to muscle their way in and start calling the shots so they can “fix” all the “problems” anime has (to whatever extent their influence allows). Fortunately for them and their Patreon accounts, the “problems” never stop coming as… Read more »

Admin
kViN
Reply to  someone

Some people who dislike feminism have reacted to this by trying to protect us, which is honestly kinda amusing. That campaign is meant to recruit writers for Anifem, not us, so that’s where any post would go in case anyone signs up. If someone wanted to pitch posts to us after getting introduced like that we’d consider it, just like we’d consider /absolutely anyone/. The Sakuga Blog’s doors have always been open to freelance writers, the only reason we don’t actively recruit is because we’re a small site that can’t pay much at all. Our only role here is to… Read more »

someone
Reply to  kViN

I’m not so much concerned about this site as I am about the site being exploited to spread feminist propaganda and strengthen their position in the anime community. I don’t want anime to go down the same path as video games and become a battleground for the “culture war,” which has by now escalated to the point where people have seriously suggested that the GamerGate resistance movement got Trump elected (and they may even be right). If you want to help bring that kind of insanity to the anime community in the West, tear everything apart and turn the whole… Read more »

can’t help but notice that there’s really only one person in this comment section trying to be divisive or create a culture war, “someone”. you could just ignore what feminists write on their blogs if it annoys you that much, but nope. you feel the need to fight them for some inane reason. if there’s gonna be a culture war, it’s on the likes of you who can’t even let people have discussions from viewpoints you disagree with without inventing silly conspiracy theories about really mundane events such as political activism. nothing’s gonna happen to your precious anime, just chill… Read more »