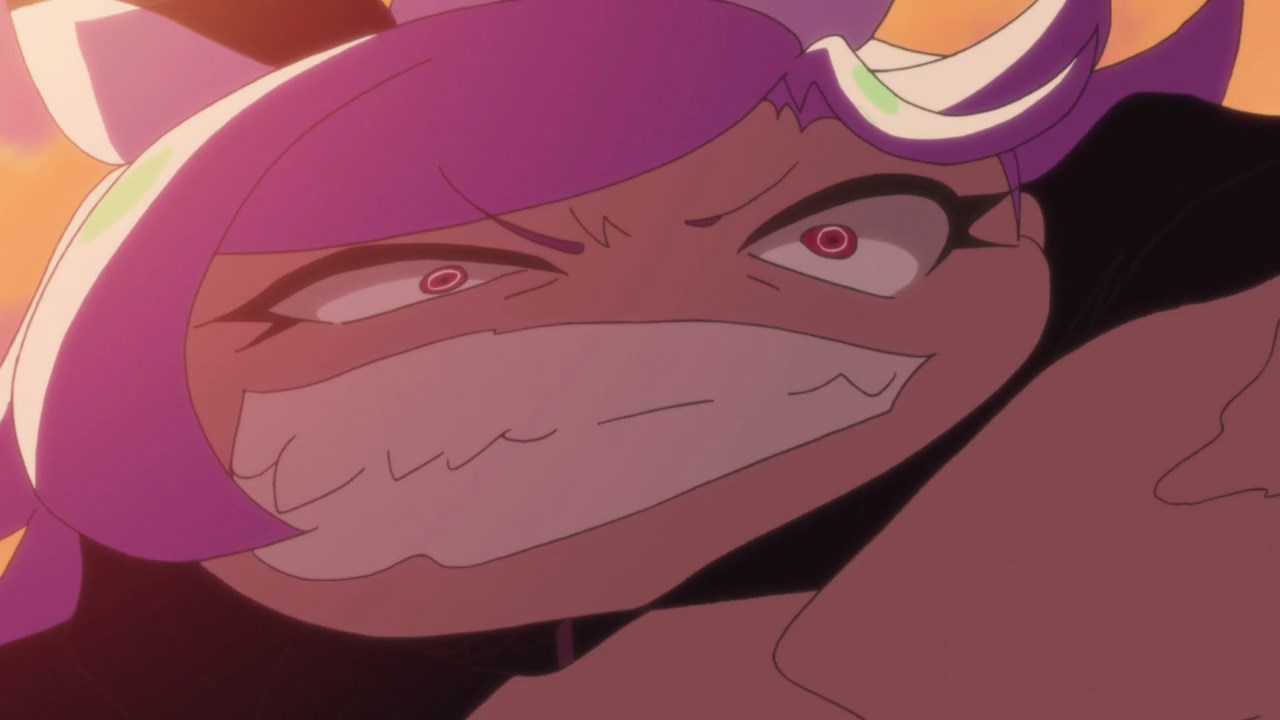 Perhaps the most common complaint I’ve seen about Akiba’s Trip since it aired is that Akio Watanabe isn’t in charge of the animation character designs, like he was in some of the games that inspired the TV show. Under normal circumstances I’d say that wanting a game’s original illustrator to be in charge of the anime’s designs is a preposterous idea at best, but Watanabe’s roots are within the anime industry; while his claim to fame is his output as a character designer for the Monogatari series amongst many other popular titles, he has also a career as an animator spanning just around thirty years. Wanting him to be a part of the show is understandable, not only due to his involvement with the franchise, but also because he’s simply great. Does that mean he should be a part of this project, though?

Before getting into why though, it’s important to understand that Hiroshi “ahoboy” Ikehata is a director who values animation itself as the centrepiece of his work whenever possible. His adventures within the industry – turning up on shows to handle episode direction along with his crew of both young and established talent, only to run wild with ridiculous sakuga parties – are not only well documented, but paint a very clear picture regarding these ideals. Just look at his influence on Zettai Karen Children episodes #27 and #37 as an example; a lovely show restrained by a limited and unambitious visual lexicon…until ahoboy arrived and granted it some of the most spectacular episodes of its time, purely through the sheer creative force of the artists he unleashed. With no concern for overall consistency, they bruteforced their individual styles and quirks into each episode without relent. You can argue that it’s a crude approach, but it led to striking results and helped people take notice of the animators involved nonetheless (just look at the value Yoshimichi Kameda’s name holds nowadays!).

It’s not as if wild parties are all ahoboy is capable of, though. His output on other people’s shows has seen more restraint these past years, and while Robot Girls Z served as a venue for him to restore the balance of things by going all out once again, his most recent outing as director in 2015’s Sore ga Seiyuu! saw him exercise this same restraint due to the nature of the show. Did he abandon his values regarding animation, then? Hardly. The crew he had gathered this time around were afforded plenty of opportunities to shine, and Hisaya Kuwabara in particular was allowed to solo one of the best concert performances in anime since 2011’s The [email protected]. Other stars include Tamotsu Ogawa and Takayuki Kitagawa, who took advantage of the simple, albeit full of personality, designs to put their loose and elastic work on display. Even Hironori Tanaka had a blast with them!

Right then, I promise that was relevant and not just an excuse to gush about Sore ga Seiyuu!. Two pieces of information are important in regards to Watanabe’s non-involvement with Akiba’s Trip; first is the values held by ahoboy which we just talked about, and the other one is the concept of animation-friendly designs, which was also just mentioned in passing. Put these two together, and we have the reason he wasn’t brought in to handle the character designs: as plain as they may seem at a glance, the current designs allow animators to input as much of their personality into each cut as they see fit without having to worry about obscene numbers of lines. That doesn’t mean every noteworthy scene is going to be full of rubbery motion though, as we’ve already seen animators take a much more solid approach to the drawings. But it does easily enable either route if they want, resulting in a neat amount of variety in styles throughout the show’s run. The same can’t be said of Watanabe’s designs, which are notably more difficult to work with than you’d imagine – a fact that clashes with ahoboy’s ideals when it comes to animation and the people behind it. It’s no coincidence that Watanabe’s anime character designer roles are generally attached to projects with economic approaches to motion, since they hide quite the level of complexity within their apparent stylization. Kizumonogatari‘s radical departure from the regular Monogatari designs doesn’t only obey the different mood Tatsuya Oishi wanted to capture, they’re also meant to be more attractive in motion, as opposed to Watanabe’s static beauty. Mr. Poyoyon Rock’s work will always be a delight to look at, but as harsh as it sounds, this is a project where his designs just aren’t welcome.

I sort of disagree in that his design can definitely work in an action-heavy style as well, but could it simply be that it’s a money/time issue, for once?

Absolutely everything can be animated, it’s always a matter of feasibility! And even when you *can* do whatever and don’t have to worry about the usual constraints, some styles are simply more suited for motion. Yoshinari’s perfect animation designs are built for movement from the get-go. Same with Horiguchi, goripon and all the designers who excel at that.

Watanabe’s designs can work for action anime, but that doesn’t mean they work for an Ikehata anime. There’s a definite difference in artistic sensibilities in the two that wouldn’t necessarily mesh well. Ikehata has a preference for a cartoonier, looser aesthetic that Watanabe’s art lies largely in opposition of. Mitsuda Hajime on the other hand fits into that niche much, much better just from looking through his art on Twitter (speaking of whom, why doesn’t he get a mention in this article? Seems a strange oversight). I don’t think there’s any cause to assume the designs are just a compromise.… Read more »

(Not an attempt to discredit Mitsuda for his work, I think Ryan just wanted to point out this has been ahoboy’s usual approach for a long time. He definitely was a good choice, even as a key animator he seems to favor loose drawings.)

I realised after posting that I forgot to mention him because I got too caught up talking about Sore ga Seiyuu!. Please hire a better writer.

Why is easy to answer: a lot of people like Pyoyoyon Rock’s style, and that sensibility does carry itself across the games and promotional artwork. Which to me is enough to say that any animation sensibilities wouldn’t have gotten in the way, the end results are just not different enough. Perhaps ahoboy might not be a best fit for Watanabe but that is no big deal?