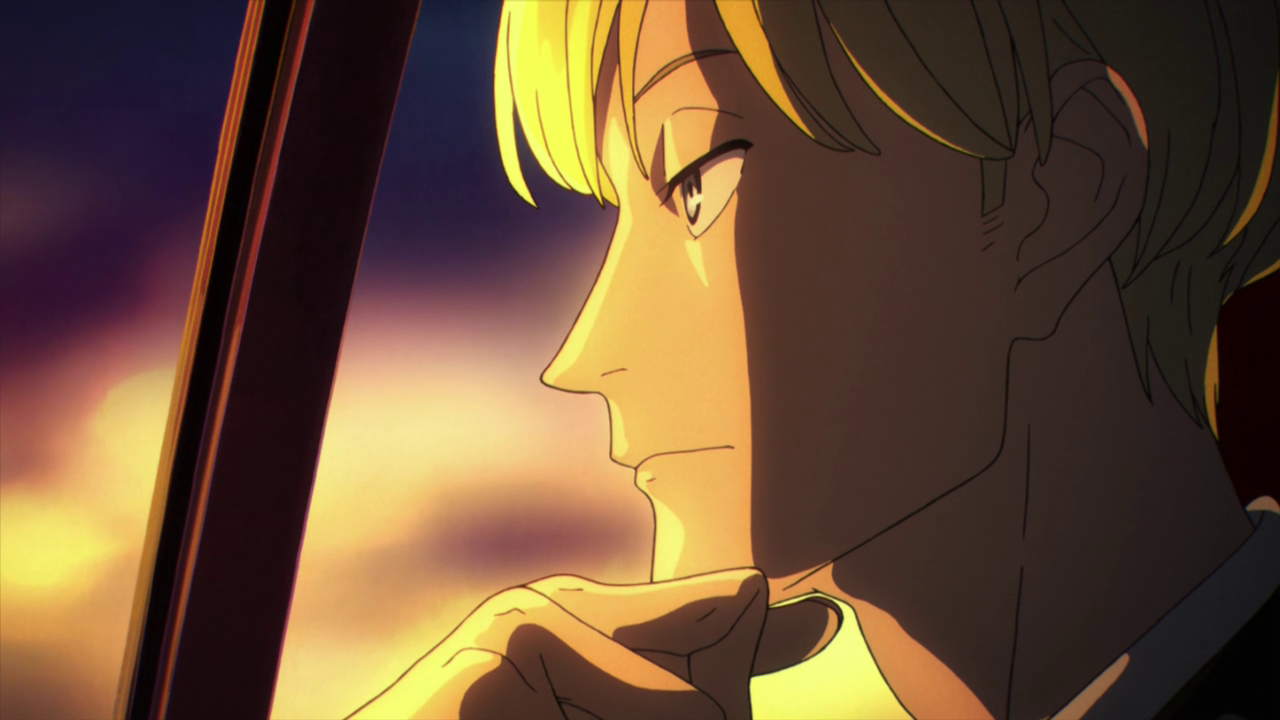 Sakuga director Shingo Natsume is back with a new show that’s quite unlike his previous projects.

Welcome to my weekly – at least for now – coverage of ACCA. There’s little to say about what happened, because very few things did; the introduction seemed more preoccupied with feeling cool than anything else, which is an acceptable goal. The way the atmosphere is established feels very natural, the exposition not so much. But let’s move onto the production now, since there’s plenty to say! Shingo Natsume, the now widely acclaimed director of Space Dandy and One-Punch Man, is back once again for another adaptation at studio Madhouse. Space Dandy‘s exceptional level of freedom for individual directors as an episodic anthology did wonders for a bunch of creators, but Natsume himself couldn’t really display his skills outside of his own episodes. One-Punch Man was a big hit he had more control over, but that was a way less inventive project that received a number of mixed reviews beyond its mainstream success. Natsume assembled a great team of animators, yet the show was fairly static outside the action scenes and overall visually uninspired. This became even more evident six months later when Mob Psycho 100, another adaptation of ONE’s work, proved – as if it needed to – that impressive movement and creativeness can go hand in hand. As if to address all these complaints, ACCA immediately showed it’s got strong visual flair…though with surprisingly little animation at this point. Excusing that with the lack of action so far would be very dishonest; the misconception that impressive animation is a tool for fights and explosions is sadly rooted within the anime fandom, ignoring its power as character expression. Again – this was one of OPM‘s shortcomings, so it would be sad to see another Natsume series with stiff downtime.

And since we’re talking about OPM, there’s something I’d like to praise first and foremost. My main visual complaint there was that the background art direction was simply very bland. To fix that, Natsume asked none other than Studio Pablo to work on ACCA‘s backgrounds. Seiko Yoshioka, the art director who previously did a tremendous job on Seraph of the End, took the challenge to breathe life onto Ono Natsume’s original setting. I would sum up her work this time around as pleasant, backgrounds that aren’t very dense but still feel like a world interacted with. It’s considerably less outstanding than her previous effort, but nice nonetheless. Personally, I’m very pleased that the three shows I’ve covered on the Sakuga Blog so far all had above average background art. 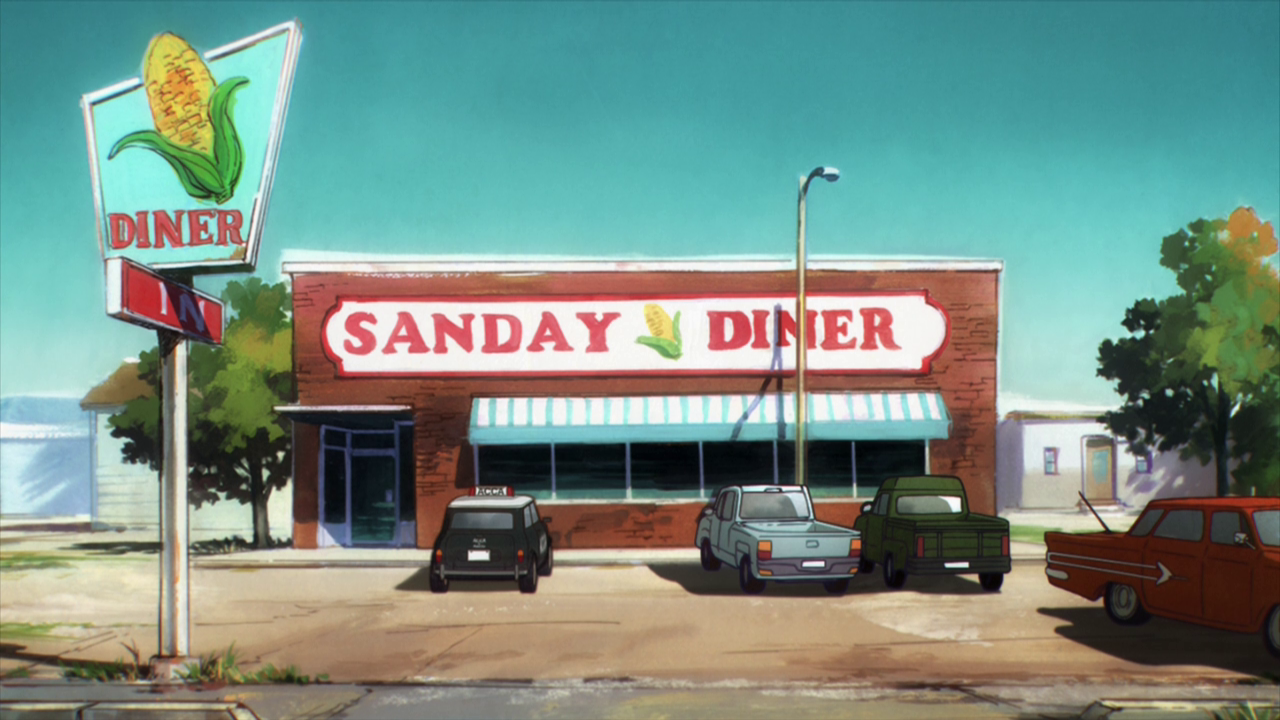 The character designer Norifumi Kugai is an animator whose cache within the industry skyrocketed thanks to his work alongside Natsume, so it comes as no surprise that he was entrusted with this more important role now. The rather controversial anime director Osamu Kobayashi expressed his discontent with the character designs on Twitter because he thought they weren’t faithful enough to Ono Natsume’s idiosyncratic drawing style, and instead felt very normal. While I can see that, I’m personally fond of Kugai’s approach – the designs are generally nice to look and allow for some beautiful close-up shots.

So the character designs, colors and backgrounds are all quite nice and blend together seamlessly. There’s a catch however! Something that bothered me and made watching this episode a considerably painful experience, mostly because my eyes are still rather sensitive after last year’s surgery. Some of you may have noticed that the lineart used in this show looks rather unusual. The problem is that the show uses a very low level of chromatic aberration, which isn’t immediately apparent but can take its toll. It wouldn’t even be an issue at all if I wasn’t exposed to it for twenty minutes straight; some situational photography techniques are perfectly fine and even gorgeous for select scenes, but can become a genuine headache if maintained. By the end of the episode, I felt slightly dizzy and tired. You might have felt the same if your eyes are sensitive to this kind of effect, or you might just be slightly bothered by something you can’t pinpoint. You might even be perfectly fine! There are multiple ways to make your show stand out visually and I can’t say I approve of this particular approach.

The animation highlight of the episode was without a doubt the cut at the end of the episode that showcased the character acting that the rest of the episode lacked. This is exactly the kind of stuff that I expected to see more often and hope we get loads of it in the upcoming episodes. The key animation staff list shows One-Punch Man regulars Keisuke Kojima and Hidehiko Sawada as well as Mob Psycho‘s Sara Moroyuki, who solo key animated episode 4.

I think Shingo Natsume was at least a bit inspired by Yuzuru Tachikawa’s approach in Mob Psycho 100 when he directed the opening and gave instructions for the ending. ACCA‘s opening sequence is also colorful and full of creative transitions and deliberate credit placement, accompanied by a catchy tune. Amusingly, both sequences reused a cut from a promotional video that was animated in advance as well. Natsume already proved with One-Punch Man and Haikyuu S3 that he can create a powerful opening sequence, and this one is so far one of the season’s highlights. On the other side, he gathered so many masters of movement that they feel wasted on a static sequence like this one.

2013 was by far the best year for the Anime Mirai project. Kevin recently talked about this initiative on his post about Little Witch Academia and mentioned how it gave birth to the generation of Yoshinari children. Izumi Murakami worked as a newcomer on Yuzuru Tachikawa’s Death Billiards and later contributed some really good skating animation to the follow-up TV anime Death Parade. Her work here was clearly inspired by Shinya Ohira – the master of abstract deformations – with traces of Shinji Hashimoto’s rough animation style. Looks like we have a new name to look out for!

Next episode is DR MOVIE lol

Support us on Patreon so that we can keep producing all this content and fullfill our next goals, as well as affording all server expenses. Those who contribute $5 and more will have access to this Q&A system!

I see that i’m not the only one that think on Shinji Hashimoto with Izumi Murakami’s ending lol, it gave me that feeling, like something that Shinji Hashimoto, Kenichi Konishi or other of Shinya Ohira’s friends could draw.