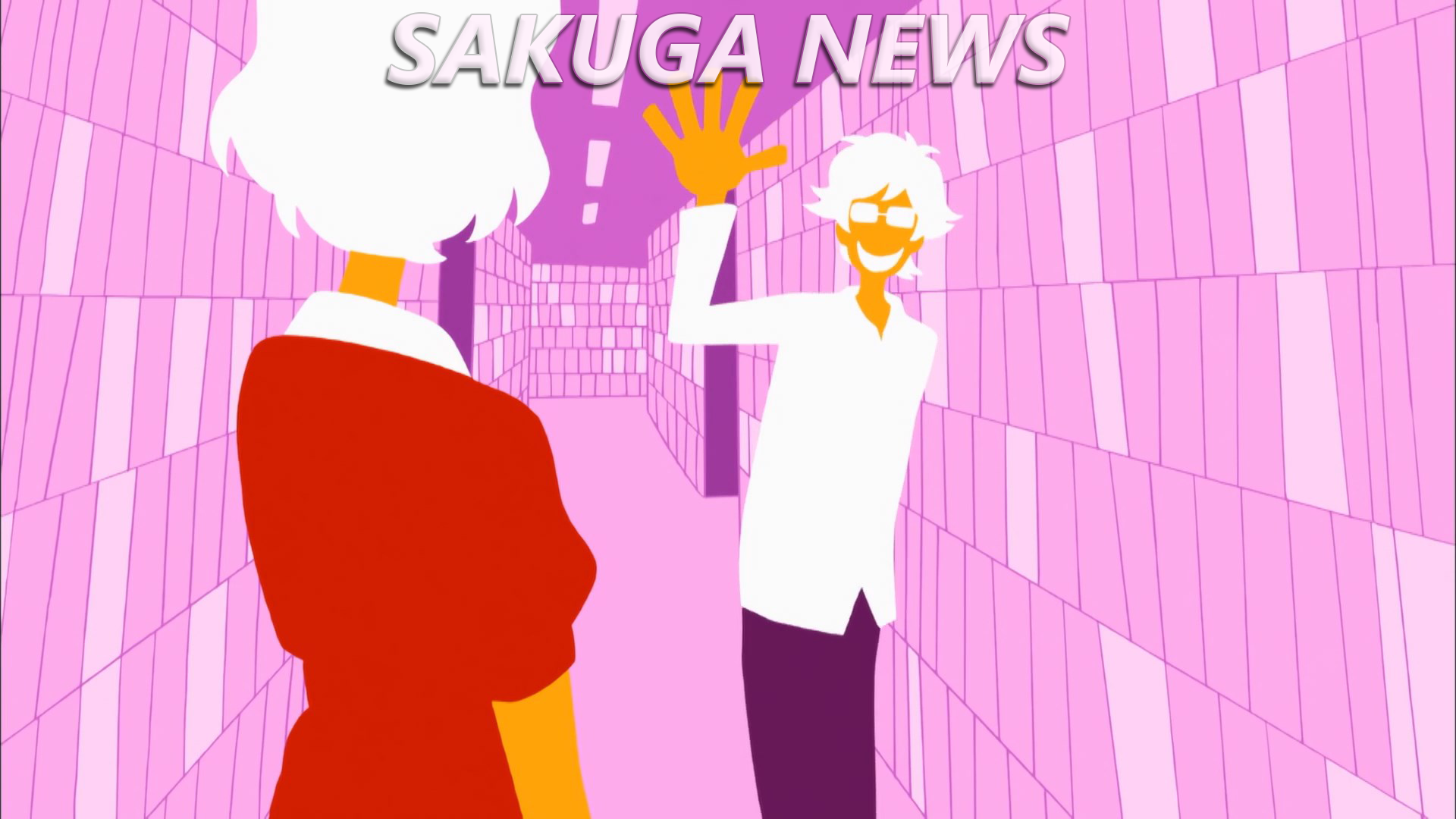 Osamu Kobayashi, an industry veteran who most will recognise as the man behind Beck: Mongolian Chop Squad‘s anime adaptation, held a talk event at the end of December alongside fellow veterans and industry legends. As is typical for these events, recording them isn’t an option, but certain people who attended were kind enough to take notes during it and post them up on Twitter for those who couldn’t. Some extracts that came from it have been mentioned in passing during previous posts, but it only seems right to just translate and compile the whole lot here for everyone. The lack of a specific topic for the event means there’s a wide spread of info that’s popped up from it, from news regarding certain guests’ new projects right down to simple trivia, so I’ve split it all up into news, highlights, and trivia just to make sure it doesn’t turn into one big mess of information.

Guests: Mitsuo Iso, Masaaki Yuasa, Takashi Mukouda, Kiyotaka Oshiyama and C-san (webgenWebgen (web系): Popular term to refer to the mostly young digital animators that have been joining the professional anime industry as of late; their most notable artists started off gaining attention through gifs and fanmade animations online, hence web generation. It encompasses various waves of artists at this point so it's hardly one generation anymore, but the term has stuck. animator currently working with a 3DCG company who doesn’t want to be named. Hint: K-san would be more appropriate, known for a specific style of FXFX: Shorthand for effects animation – water, fire, beams, that kind of cut. A pillar of Japanese 2D animation. animation.)

— Yuasa’s family oriented film is currently in production, poised for a springtime screening. Details will be announced this month, but the animation is mostly done at this point. Voice recording and lip-synching yet to be done however.

— Norio Matsumoto worked on over 100 cuts for Yuasa’s Yoru wa Mijikashi Aruke yo Otome; amounts to around 70% of its C-part. What’s more, he worked on a musical section.

— Oshiyama and Yuasa are currently working on what seems to be a TV series, to be announced sometime in March (likely at AnimeJapan). They wouldn’t be surprised if it were rated R considering all the sexual content in it.

— Kobayashi’s new work will have a certain animator on it, but their name can’t be revealed as they worked NC.

— Once the event was over, Kobayashi showed a PV for the pilot of his new series, which is planned to be distributed on Crunchyroll. (Likely to be a different project from his other upcoming movie?)

— Iso praises the Flip Flappers ED, and then: “Projects like Flip Flappers just aren’t the right venue when it comes to making use of Oshiyama’s talents. Obviously the fault lies with the producer(s), too; how could they see that ED then have him make some random moe anime from it?”

— Oshiyama talks about how the demands from up top put him in a pretty tight spot.

Kobayashi: “The fact that you still managed to make something that good despite all that is a testament to your skill.”

Oshiyama: “I don’t want to hear any complaints from anyone after all the effort I put in.”

— Oshiyama pumped out around 250 cuts of animation for the Flip Flappers finale by himself in a mere week.

Oshiyama: “I figured it’d be faster to just do it on my own than bringing in people unfamiliar to the show, then explaining everything and correcting their work. And hey, I’d get paid for those cuts as well.”

Yuasa: “They really don’t pay us directors enough, do they?”

Kobayashi: “I got paid pretty well for Naruto though.”

— Mukouda: “I got baited into working on some action for Mikagura under the promise that they wouldn’t have anyone correct it, but then it got corrected anyway. Obviously I’d be pissed off after being lied to.”

— Iso: “Oshiyama’s work on Dennou Coil most resembled the design sheets on the first episode he did animation directionAnimation Direction (作画監督, sakuga kantoku): The artists supervising the quality and consistency of the animation itself. They might correct cuts that deviate from the designs too much if they see it fit, but their job is mostly to ensure the motion is up to par while not looking too rough. Plenty of specialized Animation Direction roles exist – mecha, effects, creatures, all focused in one particular recurring element. for. He gradually improved more and more after that, to the point where he eventually surpassed the show itself.”

Oshiyama: “That’s only because the characters themselves changed as the show went on. I just opted to prioritise your vision of them at those points over the design sheets.”

— C-san: “I started making flipbooks and the like after seeing Iso’s scene in Eva where Unit 02 fights all the mass produced units.”

— Kobayashi: “The plan was actually to have Ryochimo draw all the girls in TTGL episode 04, but he ended up in the hospital so I had to take all his cuts instead. I bet people wouldn’t have flamed the episode had he got to draw all the girls.”

— Iso: “In This Corner of the World was never made with the intention of it becoming a financial success; the reason it turned out as well as it did is because the creators were passionate about making it. You won’t end up with that kind of quality when those on top are telling you to focus on making a profit.”

Iso enjoyed In This Corner of the World, but C-san wasn’t fond of it.

— Iso: “Producers are pressured into presenting projects that’re likely to sell, so they tend to use stuff that did so in the past as a reference. I came pretty close to having to make a Madoka rehash myself.”

— Iso: “Animators actually own the rights to their own genga, but things are kind of complicated since genga’s also treated as a derivative work because they’re drawn to resemble the character designs.”

— Iso: “People have developed a fundamental misunderstanding of the Itano Circus; what’s important is how they convey the space in which they take place.”

— Yuasa, in response to Mukouda talking about how much he likes him: “We should work together sometime, then.”

Kobayashi: “You keep stealing all my staff! Matsumoto couldn’t work on Naruto thanks to being busy with Yoru wa Mijikashi Aruke yo Otome.”

— Kobayashi: “I appreciate that you make the effort keep your drawings as close to the originals.”

Iso: “Doing so doesn’t leave me with much time to work on the actual movement, though. Too bad we can’t just use CG to replicate them.”

— C-san, in response to someone talking about how Tadashi Hiramatsu is thoroughly against re-using cuts because featuring the exact same movements is insane: “I don’t see anything wrong with reducing everyone’s workload. Ideally the industry would come to accept doing so if the cuts being re-used portrayed the same ideas.”

— Iso posts on C-san’s BBS now and then.

— Each guest’s favourite anime when they were younger:
Iso: “Gundam”
Yuasa: “Yamato”
Mukouda: “Eva”
Oshiyama: “Laputa, Totoro, Nausicaa, Moomin (1990)”
C-san: “Doraemon. Back then you were either a Doraemon fan or a Dragonball fan; I always made fun of the Dragonball fans.”

— Iso, Yuasa and Mukouda wanted to grow out of anime by the time they hit middle school, but ended up getting sucked in by Yamato, Gundam and Eva.

— Iso: “I made sure to include around 100 cuts worth of characters talking while standing still in each episode of Dennou Coil, just to make things a bit easier.”

Oh my god, this is so invaluable. It’s like the cliff-notes version of everything I wish I had time to scour twitter for. Thank you so much for this. I’ll be eagerly looking forward to more content like this. And once I get through my current financial hiccups I’ll certainly increase my pledge. And wow, the seemingly familial relationships between those guys is great. They are all such impressive people, it’s crazy to imagine them all in the same room. Yuasa’s new projects are both sounding extremely interesting. I like both good family films, and R-rated high sex/action/comedy stuff, and… Read more »

He did have a point about the ED being extremely good and deserving to have a show along those lines, at least.

That’s actually really nice! Will this be a regular (weekly?) thing or event based?

Longer posts like this’ll be based around events and how much info from them are posted up online (there’s one next week involving producers from A-1, Madhouse and WIT, so I’ll be keeping an eye out on info from that). In an ideal world I’d be able to go to them myself, but let’s save expensive trips for when we’re a multi-million corporation. More short form posts with harder to find industry news and comments from people within the industry are going to become a regular thing now that we’ve hit our second Patreon goal too, so look forward to… Read more »

That was a great read!

Did Kobayashi mention something else about Naruto? Like how he of all people got around to work on it.

Doesn’t seem like it! Perhaps something he’ll bring up later down the line though.

I wonder if this Yuasa x Oshiyama series is the mystery series (an adaptation, I think?) Science Saru was seeking animators for last summer (I’m sure I’ve seen them post a job advertisement on their Twitter account somewhere around August/September, but it seems to be deleted as of today?), or is it a different thing altogether.

Ha, he sure has an ego to match his skill. What is he even doing here?

I think I’ve learned more about some of the productions and people involved than I have before just from this. I wouldn’t even know where to start if I had wanted to get this information myself. There is definitely a need for this sort of article and I look forward to more like this.

Bless yer heart for writing up this one! I’d been dying to know what went on during this talk. They seem like a cool bunch of dudes, and it’s funny to see the way they play off each other. I love Ito’s little boast, and how hard his is to impress, as well as how quick Yuasa is to network with his peers. I’m hoping to catch both of Yuasa’s movies in theaters, but I guess it depends where the select screenings are taking place. On top of the films, I’m pretty hyped for Oshiyama and Yuasa’s upcoming series. I’m… Read more »