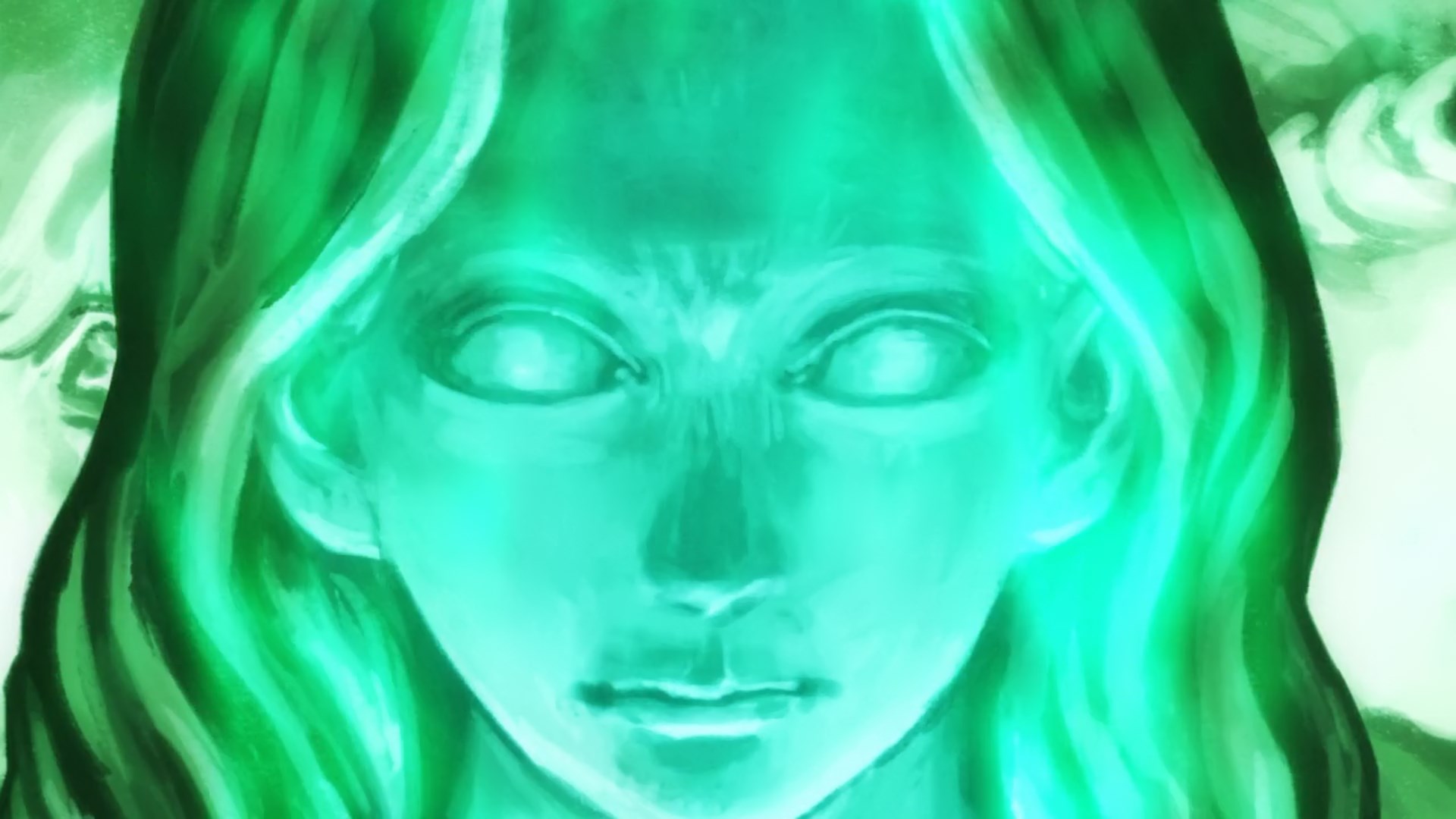 I must say that I feel quite comfortable within the framework Little Witch Academia has already created. This episode was dedicated to establishing Akko and Diana as two seemingly opposed but ultimately similar figures, with the former triumphing in the end because she’s more sincere – the simple sense of morality Yoshinari has always imbued the series with. I’m also fond of the hints that the collectible cards – which of course exist in a show partly funded by a major merch corporation! – might become the foundation of the series for now. There’s even a confirmation that the Shiny Arc is only the first form of the famous magical item Akko’s been entrusted with, and… okay, you probably got it already, what I’m saying is that Little Witch Academia is a kids show no matter how you look at it. One that happens to be airing at midnight because the TV anime model is fundamentally broken, but I suppose I can get to that rant another day. Onto the episode!

Last week I focused on the Yoshinari Children, and the show’s response to that has been to further involve his family. Unlike that figurative bond however, this time we’re talking about his actual brother Kou “Aninari” Yoshinari. His presence is also a neat contrast with those younger followers, since he’s Yoshinari’s mentor rather than a protégée. While that isn’t the project’s nature at all anymore, Little Witch Academia was conceived with the idea of training young animators through a project that felt relatable, so it’s rather cute to see that relationship reversed with Yoshinari’s master stepping in. Their styles seem to stand on opposite ends nowadays, but they used to be fairly close when they joined the industry – understandably so, since it was Aninari who forcibly pushed him around at the time, whether it was towards animation or illustration roles. It’s the latter where their work still shares some resemblances (unlike their animation, since Yoshinari was forced to discard the obscene amount of lines his brother had inculcated him with after he joined Gainax), which makes his work on the episode particularly appropriate. The statue comes to life in a way only he could pull off, never abandoning the look it had as a gorgeous background element; since the episode was storyboarded by Yoshinari himself, I get the feeling the scene was conceived with his older brother’s talent in mind to begin with. Aninari’s repertoire is actually quite wide, but there’s a set of styles he’s become known for because no other artist in the industry dares to attempt – paintings that should represent still beauty but he allows to move, watercolors in motion for scenes longer than should be possible in TV anime, and his unmistakable cuts that still to this day fool people into thinking they were crafted through 3DCG. One of the most amusing examples of Aninari’s uniqueness was an exposition with Kizumonogatari’s production materials; the film is full of incredible pieces of animation, and yet seeing his work side by side with regular sheets immediately made it obvious Aninari approaches anime as a different art form. Regular key animators abandon a scene after they’ve assembled its skeleton, but he won’t allow no painter nor photography department to overpower him. It’s his scene and other people are rarely allowed in.

For quite a while I’ve thought that Yoshinari’s dismal view of his own work, which seems to go far beyond an artist’s natural harshness towards themselves, is at least partly caused by his brother. He’s repeatedly claimed that he can’t actually draw and that he makes things move constantly to hide that fact, which is understandable when you consider he had to coexist with an extraterrestrial creator right by his side. Yoshinari broke the newbies, but his brother might have broken him a bit too. I could only laugh when I first read that Aninari harshly criticized his younger brother’s fantastic mecha design work on Gurren Lagann, and it was truly heartwarming to see him come to his aid for his TV directional debut. Cute anime is made by cute people after all. 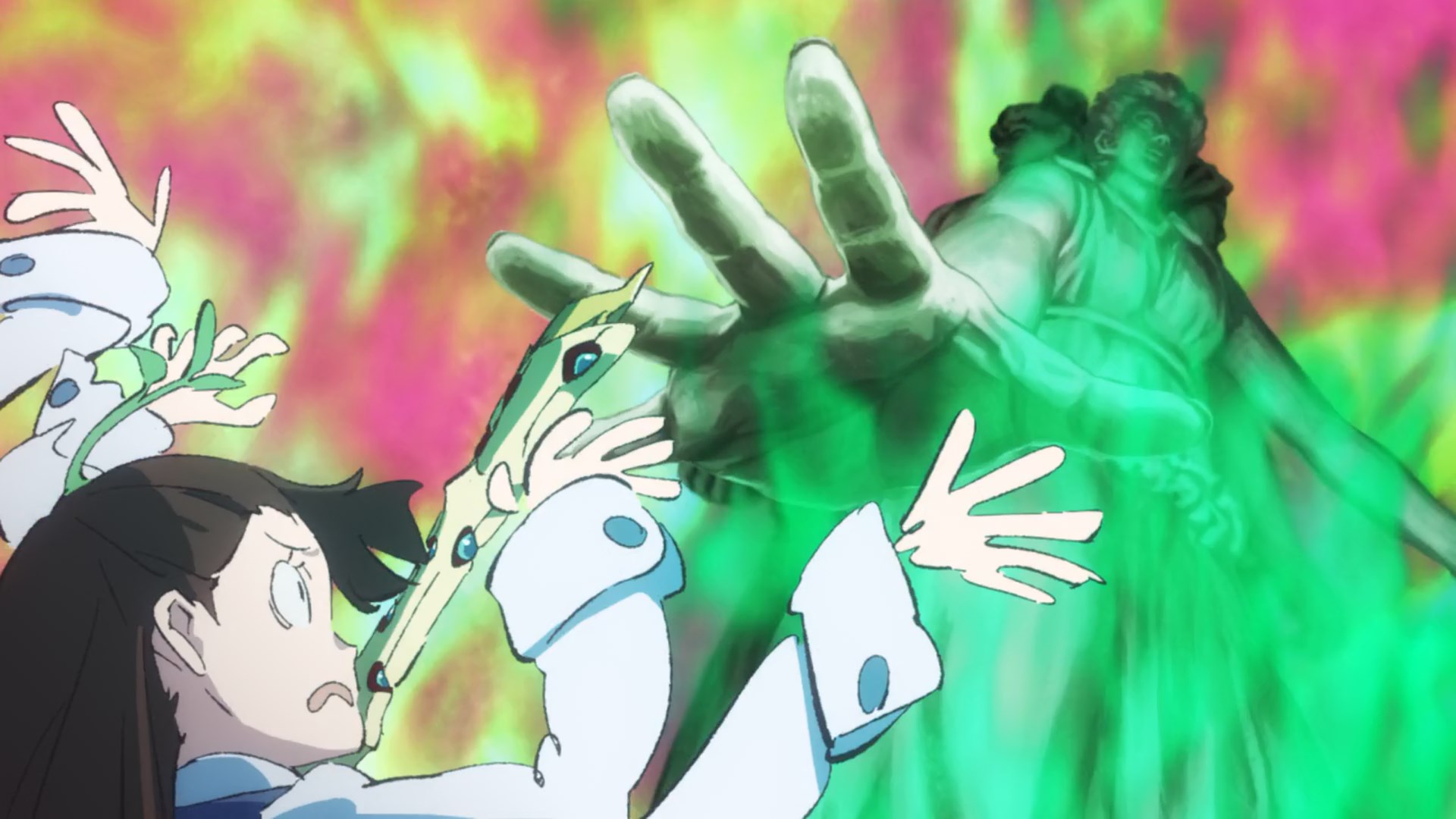 Leaving that highlight aside, the first thing I noticed when watching the episode, as it’s apparent from the very beginning, is that the series really seems to have no Chief animation director; the role as such didn’t exist to begin with, but as of late Trigger has been crediting tasks with non-standard titles so there was no way to tell from the first episode alone. Seeing how the character art departed right from the start of #2 though, now I’m confident in saying that either there isn’t one or Shuhei Handa is focusing on it so little that there might as well be none. I personally don’t have very strict rules when it comes to this – the role has become widespread because it truly is needed, but excellent shows can get away without one and even benefit from it; of course that having an entire Mob Psycho series feeling Kameda-like would have been neat, but him rejecting those series supervision duties allowed individual animation directors to have their own take on the designs, and personally gave him more time to pull off unbelievable episodes like #8. But on the other hand, there’s no denying the cohesion and quality insurance that a strong Chief animation director gives you. Their goal can easily be misunderstood as ruthlessly enforcing uniformity, but it’s more along the lines of making every episode feel like they really belong to the series, while also checking the drawings are simply good enough – just check Yoshihiko Umakoshi’s inhuman work on My Hero Academia we talked about. Definitely not out to drown individual animators, just maintaining quality standards.

If I had to decide whether a series like Little Witch Academia would benefit from having a Chief animation director or not, I’d easily side with the yes; how could I not, after two theatrical experiences where every drawing felt like Yoshinari’s own work! That’s the ideal choice of course, but not necessarily a feasible one; with Yoshinari himself supervising the show would simply never come to fruition, since the polish he obsesses about couldn’t be achieved for 25 episodes, and I don’t think Handa was ready for two cours worth of that either. Simply discarding the role rather than doing an unsatisfactory job with it then does make a lot of sense. It’s not as if the quality of the art nosedived either way – it definitely felt more pedestrian, but that’s simply the regular deterioration after the first episode feeling stronger because the original LWA is still my main frame of reference. Personally, the show’s sensibilities are so appealing that I can deal with it no longer being an unbelievable production; the smear bonanza stands out of course, but framestepping through the first scene also reveals a delightful if not perfectly executed cut where you can feel the Yoshinari mentality in less capable hands – look at her brow! 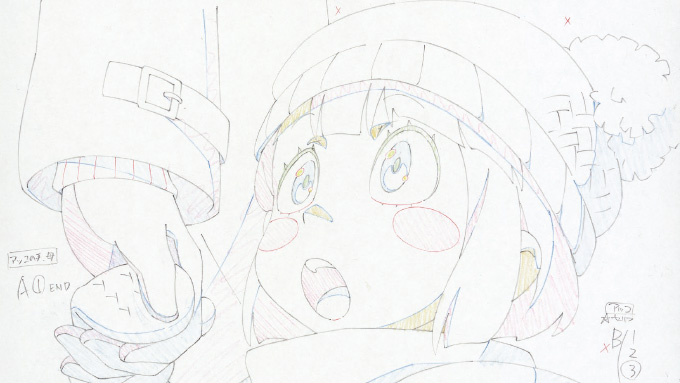 To be honest, I decided not to focus on the episode’s animation in general because it’s almost thoroughly unspectacular. Aninari’s scene would have stood out within right about any episode, let alone a low priority one. Even beyond the almost uncanny way in which he allowed the statue to move, the rough lineart and frantic motion used for Akko’s movement are striking. It feels like his own take on the series’ cartoony style, proudly claiming that he can do this too – and possibly better than anyone else. It’s also a rather adorable detail, since Diana uses the trick to pluck the plant growing off our oblivious witch that she’d noticed before already. But as I said, that was a very isolated highlight. This is a so called low calorie episode, allocated fewer resources to give priority to next week when we know an animation explosion will occur. Masato Nakazono got to help out Yoshinari a bit with the storyboard and directed the episode, where he did an acceptable job. He’s still a newcomer – joined Trigger for Kiznaiver after having done production work at Madhouse – so I hope further Little Witch Academia episodes allow him to leave a stronger impression. The list of key animators again features some core LWA people alongside Trigger animators, this time with the help of a lot of freelancers. Itsuki Tsuchigami’s name made me expect some spectacular digital effects, but this wasn’t the time for that after all.

I originally planned to write about the world design too, but it ended up being too long already. But there will be plenty of time for that! Now let’s look forward to the strong episode awaiting us.

So he paints his cuts himself?

Sometimes he inbetweens, paints and does everything. Sometimes he handles the photography process. He just doesn’t play by the rules at all. The director of an episode he worked on said he didn’t really understand what he was doing when he say his WIP, but that the end result somehow had used not 3DCG despite looking like something that couldn’t be traditionally animated. Yoshinari’s a genius but his older brother might not be human.

(Also you’re not missing that much with that video, it was just a compilation of his White Album cuts which are simply beautiful. Thanks Youtube.)

Isn’t the Ending animation also amazing? It was so beautiful that I watched it multiple times(Of course the song itself was also beautiful).

One (perhaps naive) question: when you say that Yoshinari has a very dismal view of his own work, have you taken in the fact that Japanese do tend to do that? Is there any evidence that his brother was indeed really strict/harsh on Yoh?

The ED’s fantastic, I only skipped talking about it because there’s a post about OP/ED of the season coming up very soon. And yeah, I’m aware of JP culture and artists in particular being prone to that, but the gap between Yoshinari’s skill and how he perceives himself has always been ridiculous. Aninari flat out called his Gurren Lagann robots crappy, and he was personally the one who forced animation work on him (you can read that on the multi-part interview WMC put up a while back). During a western con Yoshinari was asked if he’d request his brother’s help… Read more »

Thanks for those information, I’ll look up the interview. Looking forward to the post on OP/ED!!

That video’s blocked in my country. Would it be too much trouble to upload somewhere it wouldn’t be? Thanks.

Also nice to see some much deserved love for Kou Yoshinari. I’m way too used to see his Nanoha cut used for reasons modern sucks or what have you.

Fortunately Sakugabooru is here to save the day: https://sakugabooru.com/post?tags=kou_yoshinari+white_album+