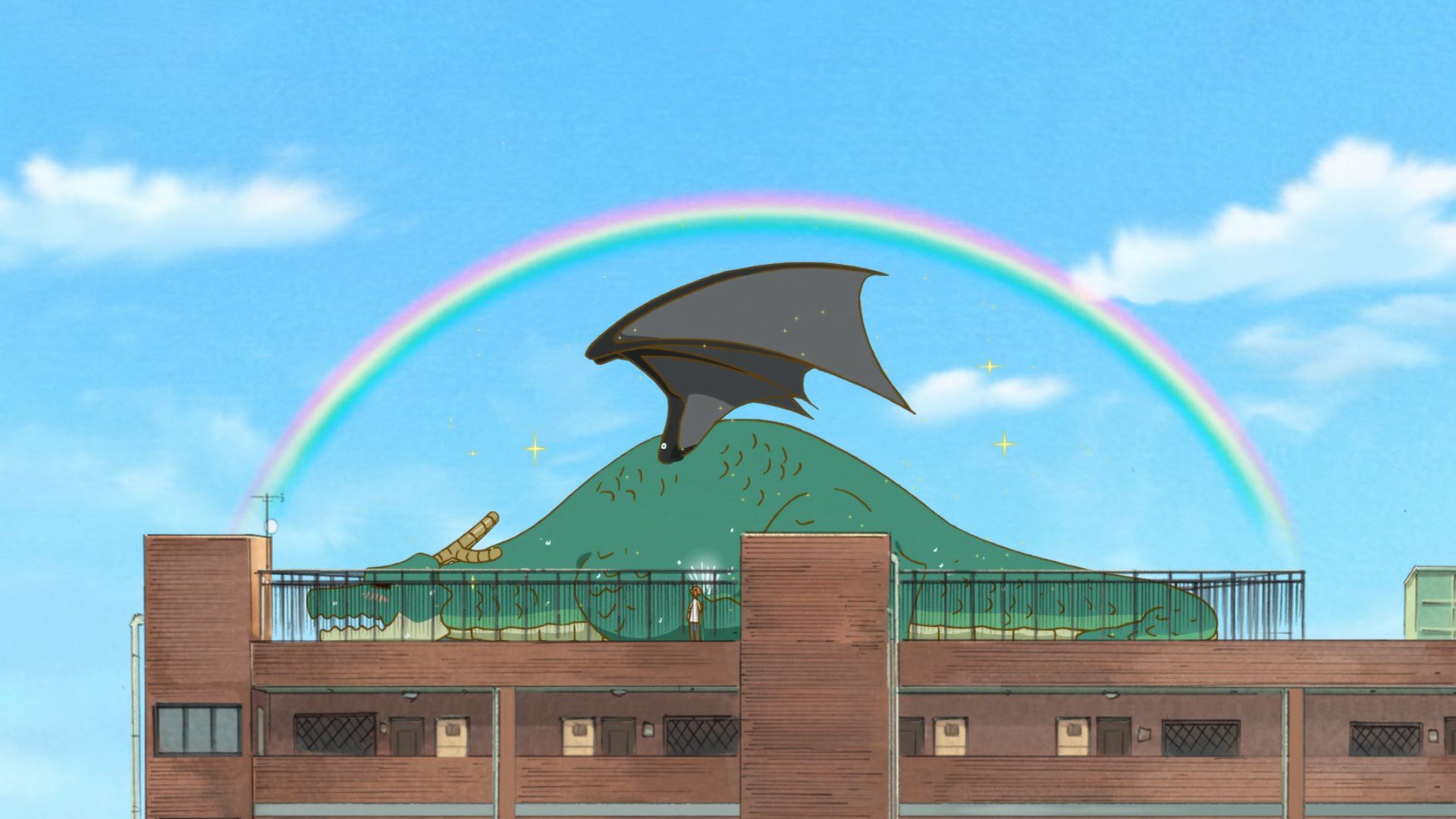 Turns out that dragon scales are light, fluffy and warm.

Storyboard : Yasuhiro Takemoto
Episode direction : Noriyuki Kitanohara
Animation DirectionAnimation Direction (作画監督, sakuga kantoku): The artists supervising the quality and consistency of the animation itself. They might correct cuts that deviate from the designs too much if they see it fit, but their job is mostly to ensure the motion is up to par while not looking too rough. Plenty of specialized Animation Direction roles exist – mecha, effects, creatures, all focused in one particular recurring element.: Kohei Okamura

— Takemoto is dead set on turning the family aspect into the core of the series. Since that needed to be established early, it’s no wonder that he ensured that feeling came across by personally storyboarding the first three episodes and even writing today’s. And I have to say that he’s done a really good job at it; by adding an extra segment that points out the living space was getting very cramped with the addition of the two dragons and making them move, then heavily rearranging the material to cover very household-focused chapters, we got a pretty cohesive family story. The weirdest part of this show isn’t the outlandish premise, it’s how it builds a cute and warm tale out of that. I still feel like the idea of an anthropomorphized dragon with big boobs cosplaying as a maid alienates most of the viewers who would enjoy the mood it nails, but I can’t say I’m against projects that make no financial sense. Keep giving me more of this and I’ll be happy.

— Since I mentioned original material already, I have to say I also really appreciate the extra texture given to scenes. After Tohru mentions bugs accidentally get between her massive dragon teeth, Kanna starts innocently chasing a butterfly. The conversation moves on from that, and she eventually gets the butterfly to land on her finger…then eats it, no accident here. Toying around with expectations is one of this show’s favorite tricks, as is giving Kanna childish traits. She often does her own thing and gets distracted when the adults are talking about stuff a kid doesn’t particularly care about. Apparently the gay horny dragon cartoon really is the place to go for depictions of family.

— Truth to be told, Noriyuki Kitanohara’s presence as the episode director felt merely symbolic – getting the episode done rather than having much of a creative effect over it. I thought he might do some fancy animation himself, but there was honestly no need of it so he might as well focus on future episodes. As an action animator, he won’t miss any chance he gets. 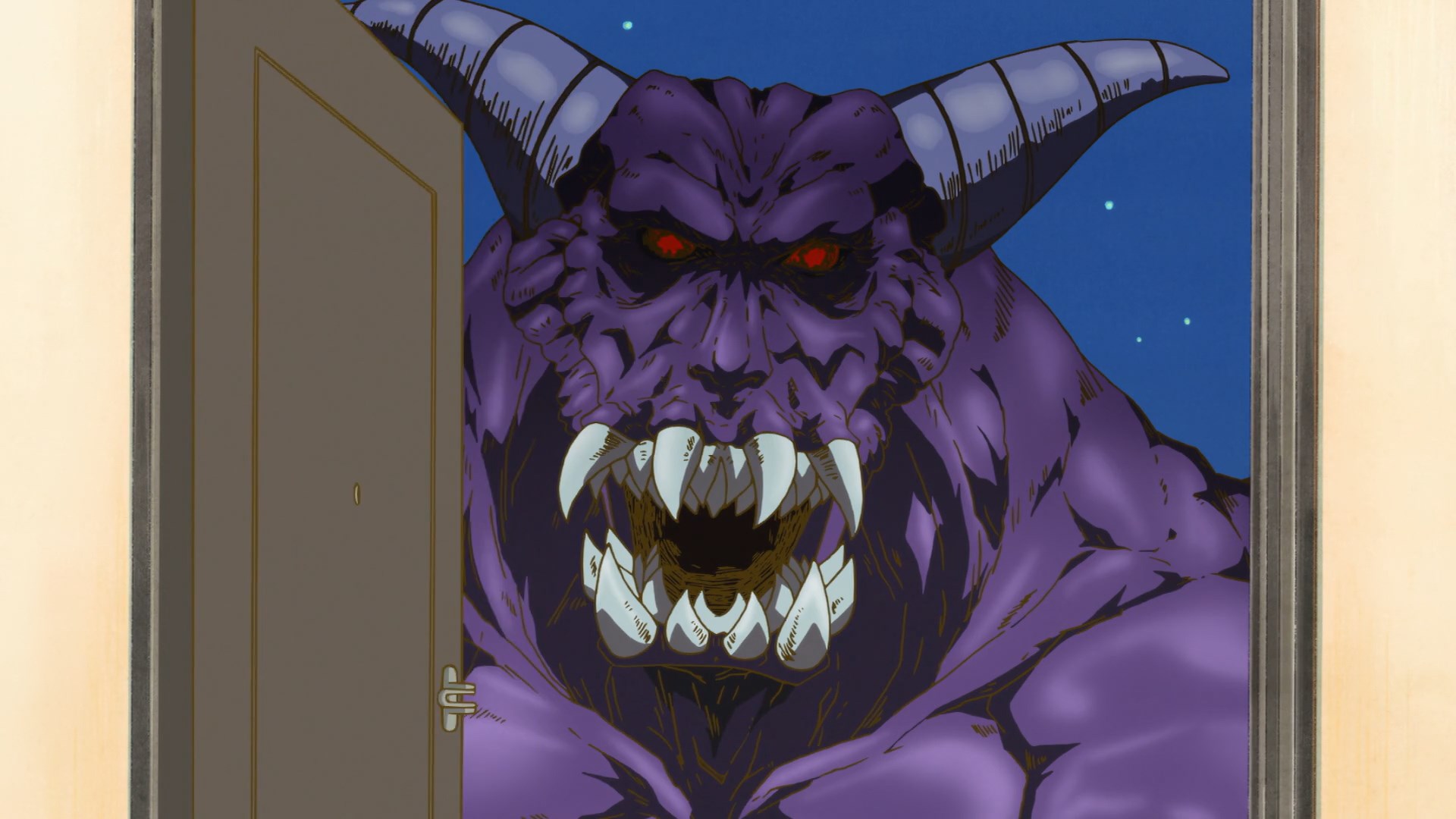 — The show has fun with the depiction of the dragons. Just like the absurd fight last week, there are scenes that remind us they’re terrifying creatures they could instantly wipe out everyone. And then they also get to act and look like the goofy dorks they are. It’s a similar contrast to the one inherent in their dragon/human forms, expressed in an amusing way.

— I promised I would keep reminding people that the backgrounds are great, and that I will. More interesting rough work this week, and also shots that combine animated, CG and painted elements very well; people sometimes act as if seamlessly merging parts is the only way to achieve harmony, but this show makes the relatively distinct elements coexist naturally. Again, thumbs up for the art directorArt Director (美術監督, bijutsu kantoku): The person in charge of the background art for the series. They draw many artboards that once approved by the series director serve as reference for the backgrounds throughout the series. Coordination within the art department is a must – setting and color designers must work together to craft a coherent world. Mikiko Watanabe.

First Animation Do episode next week! They’ve stayed away so far, so they should be available to put together something nice.

This article pretty much explains why this is my favorite anime of the season so far.

I find this show really heartwarming and funny at the same time. Goregeous to look at of course. Absolutely love pretty much everything about it.

(I accidentally hit enter too fast on my last post lol – wish I had an edit button.)

I’d been a fan of the manga for a while, and the adaptation really seems to understand its weird charm. On a surface level it’s the last thing you’d expect to be this cute and warm, yet in just 3 episodes they already feel like a genuine loving family.

Damn where’s the CG? I didn’t even notice it.

The water in that shot is CG, the bird was drawn by an animator and the rest was handled by the art department. In general the show is low on 3DCG since the general aesthetic makes simple hand drawn elements feel more appropriate.