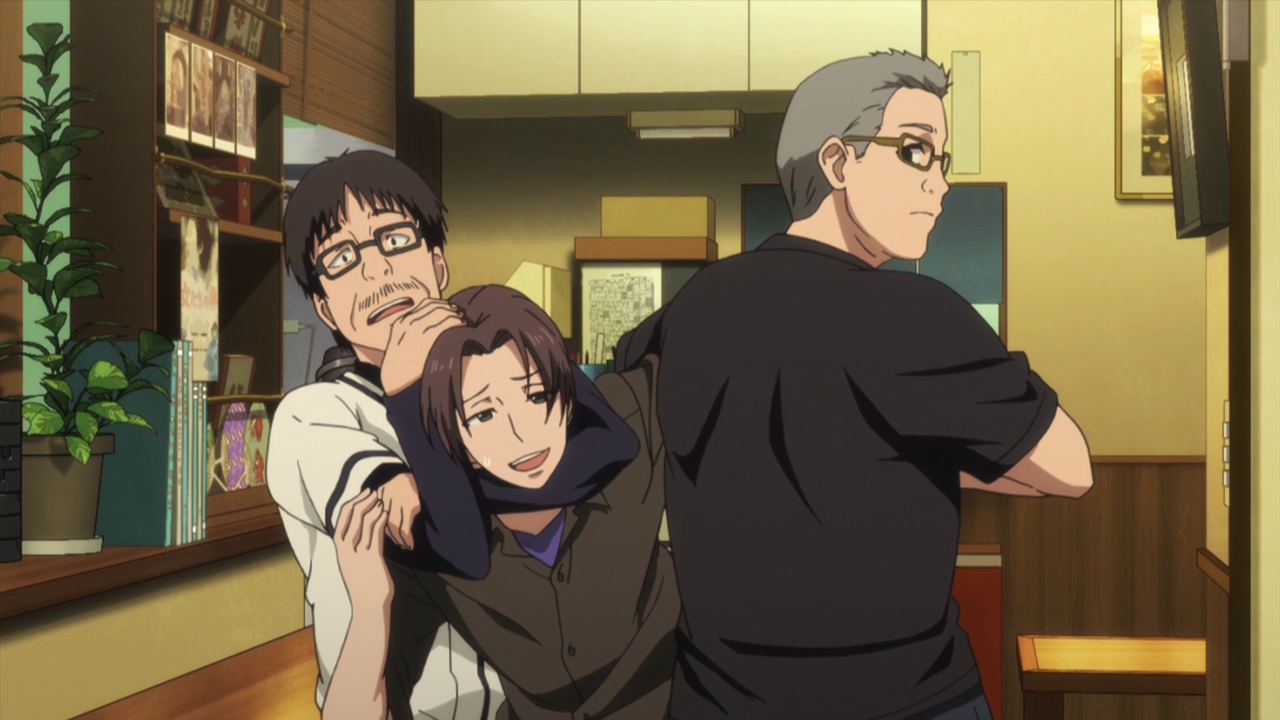 This time we’re bringing you a translation of an interesting roundtalk from Newtype’s February 2017 issue. It features a couple of studio leaders replying to questions regarding their past and future works, the industry at large and some of its fascinating creators. Enjoy!

– I would like to start with a look back over the last year.

Matsukura: From my point of view, when it comes to both number of works and the quality of them, Minami-san had a solid year. With My Hero Academia, while being a very Kenji Nagasaki-like TV anime, you could feel BONES’ strengths as well. It was a very high quality work.

Minami: I also watch J.C.’s works and think they’re well made. Sometimes I get drunk and when I return home and turn on the TV, usually one of Matsukura-kun’s works is on. (laughs)

Matsukura: (laughs) But surely the number was large. I think it was around 8 cours worth last year, but I had 4 titles overlapped in July and that was tough.

Minami: The number of 1 cours shows has increased. If you make a 1 cours show and it’s a hit, the publisher comes back and says “Let’s do another one!”. However by that time, the studio’s schedule is already stacked and you’re like “What are we gonna do?”. (laughs)

Matsukura: You don’t want them to go to another studio either. (laughs) However, both me and Minami-san know the situation when there’s no work offers coming from the industry. Therefore, there’s a fear of having no work for your staff.

Minami: That’s the most terrifying thing. But well, we’re now in an opposite situation.

– What do you have planned for this year?

Minami: From the announced ones, we have My Hero Academia Season 2 and Blood Blockade Battlefront Season 2. We’re also working on an original project that’s in production and another one that may be broadcasted this year.

Matsukura: We only have announced 4 titles for January, but there’s more stuff planned from April onward.

Minami: Speaking of which, you went abroad quite recently didn’t you? Was that for location hunting?

Minami: Knew it. (laughs) But when I see Matsukura-kun go abroad for location hunting, I feel like the times have changed. I mean, don’t you think your company has been mostly making shows that take place in Japan?

Minami: The stage was usually a school and the visuals were white-ish. (laughs)

Matsukura: For example Honey and Clover which was recently released as a Blu-ray BOX (advertisement!).

– If you think about it, BONES seems to have lots of black-ish works. (laughs)

Matsukura: Not at all, Minami-san’s company uses good colors. It’s just that in the past, my company used to have a terrible mindset that if we use blue and gray all the way and make it move, it’s Japanimation. (laughs) BONES use colors that look naturally anime-like and I like them.

Matsukura: I’d say it’s something you’ve carried over from Sunrise. But instead of just copying Sunrise, I feel that your studio has its own color. Over here, we change our approach with each title and have multiple photography teams, and as a result we really don’t have our own studio color. (laughs) 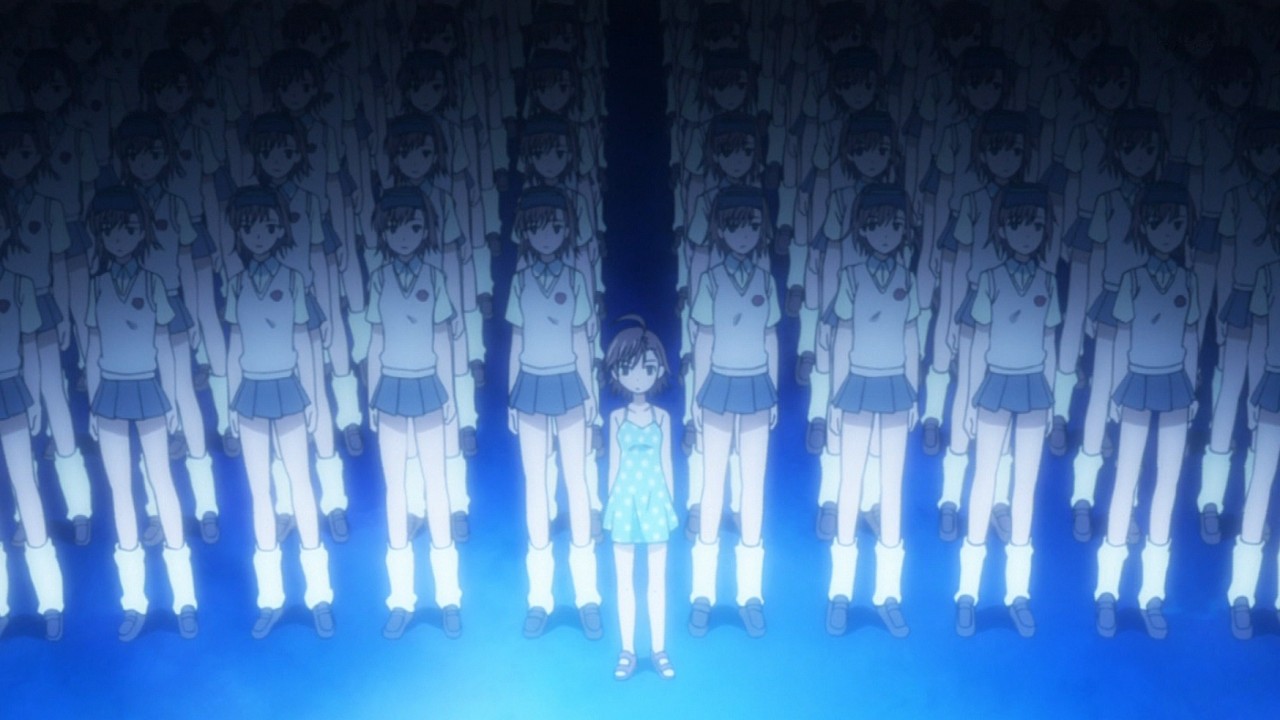 – The number of anime per year keeps on increasing. Do you think it will change this year?

Minami: I think that if the number keeps on increasing even further, the industry won’t be able to handle it. Maybe that’s why small studios keep on collapsing.

Matsukura: That’s right. I think small studios aren’t in a position to pick their works, so if they’re assigned a difficult series (production-wise), they become a time-bomb.

Minami: At BONES we have 4 sub-studios, so even when the situation becomes dire at one, another will come to assist. This adjustment within the company is very effective. Small studios however can’t afford this luxury – they just have to do their best with one team at one place.

Matsukura: And eventually, the broadcast gets delayed. This keeps on happening often these days. A while ago, when the number of works stayed within a sustainable range, the small studios were assigned works suitable for their size. The industry is in a very messy state now.

Minami: The publishers seem to have trouble deciding which content they should pitch to which studio. Actually, I sometimes get offers that would be much more suitable for Matsukura-kun than myself. (laughs)

Matsukura: I get those mistakes too! I’d like to say “Bring this to Minami-san instead!“ but there’s so many plans out there.

Minami: There is. Whether we can collect production costs and make it is a thing that’s discussed afterwards; these are just plans for productions. In particular, there’s a lot of adaptations.

Matsukura: It’s said that the quality of the manga is not what it used to be as well, but even during that time we produced some noteworthy manga adaptations. Also, some titles with a slight edge have started to appear in our line-up of offers.

– What about original works?

Matsukura: Actually I haven’t been counting the number of original works, but I think the number is increasing as a whole.

Minami: Yes. However, the circumstances determining whether an original series comes to fruition or not have been changing year by year. As of late, digital distribution has to be factor for sure. When the distribution is decided and there’s some quality to the product, you can also sell it overseas. But then, the overseas side says “sci-fi, action or fantasy” – I’m being told that if at least one of these genres is not included, the show won’t become really popular there. (laughs)

– But these are the genres that BONES is good at, right.

Matsukura: At J.C. it’s the very opposite, we have a lot of highschool shows. (laughs) But each genre has its own enthusiastic fans overseas. After all we’re still getting mails lamenting we won’t produce a second season of Toradora!.

Minami: We have Ouran High School Host Club which was also really popular overseas. It’s important to understand that the fanbase is not only limited to Western countries, but also spread in Asia. But it’s quite difficult to tie these facts into the business.

– There aren’t enough successful instances where the overseas audience watched the show and also bought the goods.

Matsukura: How can Japanese companies like ours reach that stage is a thing that’s very troubling.

– For the last question, what are the creators you’ve been paying attention to?

Minami: I’m curious about what kind of work Kiyotaka Oshiyama is going to do next. His directional debut on Flip Flappers was slightly reminiscent of the episode he directed for Space Dandy. It had that fantastic feeling and was surprisingly well done. I’m also looking forward to Shingo Natsume’s ACCA.

Matsukura: I’m paying attention to Yuzuru Tachikawa because he’s a director who has a peculiar visual sense. Actually, I tried to contact him but he refused because he was doing Mob Psycho 100 at BONES. (laughs) I’m also really happy that I was able to produce Flying Witch directed by Katsushi Sakurabi. But to be honest, I think outstanding directors have it hard these days. When they’re doing an adaptation, they have to follow the original story and there isn’t enough room for them to do their own thing. But despite that, they’re doing their best and I want to support them.

Minami: I also think there’s a lot of interesting people among young animators out there. Maybe that’s because a lot of them who want things to move gather at my studio. I’m looking forward to what they will draw in the future.

Manga quality is on decline? Thats an interesting take but I think theres just so many manga out there, unless they producers are really just limiting their desires to whats new in their magazine. They should really take advantage of the many LN, go branch out in novels, and also perhaps revisit their concluded series/remake old stuff for us in the new generation.

“When they’re doing an adaptation, they have to follow the original story and there isn’t enough room for them to do their own thing.”

Funny he would say that when BBB was apparently highly successful BECAUSE it strayed from the original. I also can’t help but think of Kyoani and this season Kobayashi-san^^

Their worries are understandable, there’s still a ton of fans who judge adaptations according to how faithful they are. And even on a business sense, an anime that sticks very close to the source is sure to have a fanbase whereas a reimagination doesn’t have an established following. I’m always glad some creators do their own thing in spite of that!