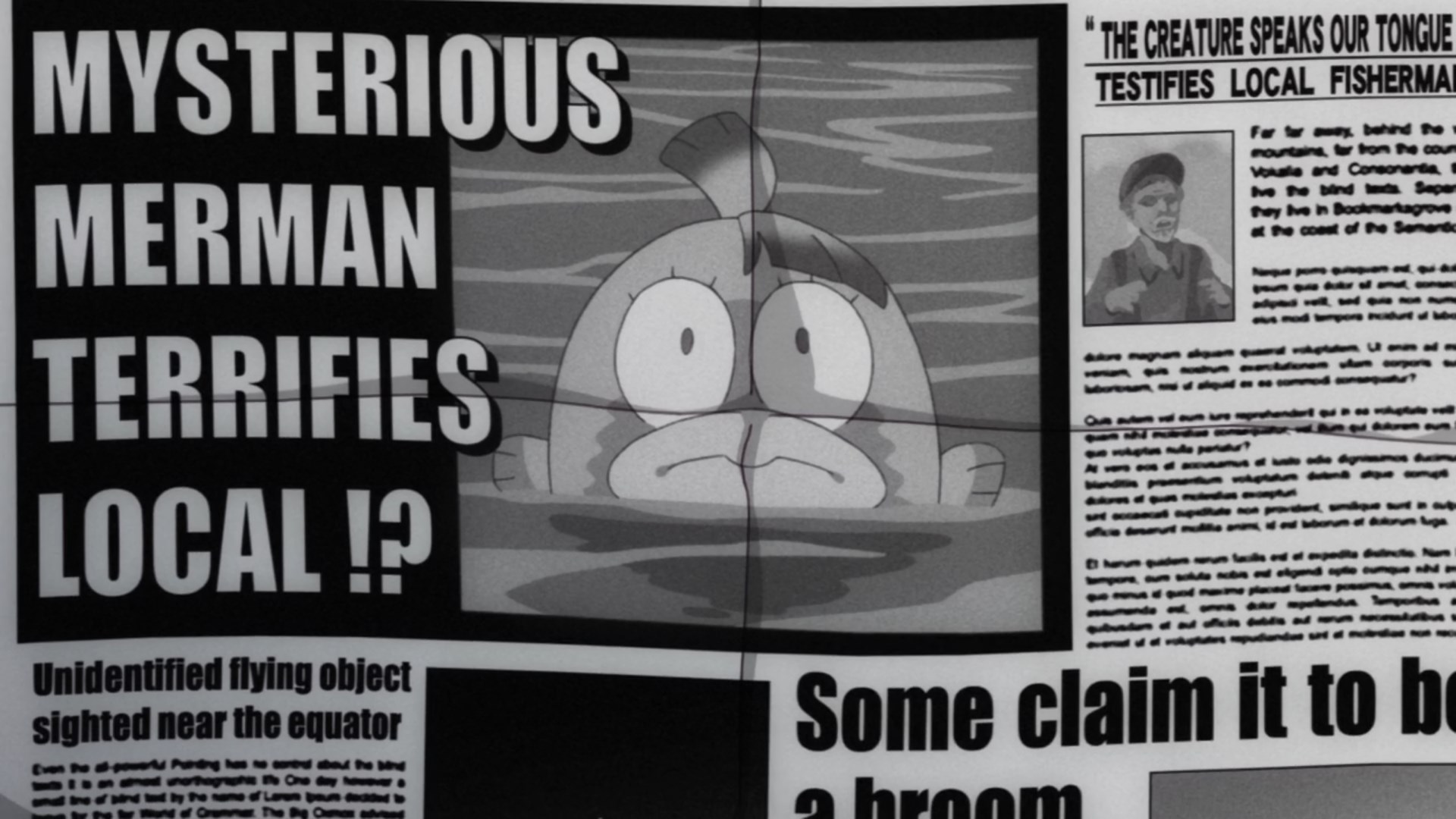 Dare I say this was the funniest Little Witch Academia has ever been? Yes I do. Imaishi’s episode is coming next week, but his pupil already made this ridiculous adventure possible. Enjoy reading about more Gainax School creators!

I talked about last week’s episode as an inflection point for Akko’s character, as she realized she had to actively work hard towards her goal rather than daydream about its glory. I’ll be honest and say I didn’t expect such immediate consequences though, with arguably the funniest episode of the entire series devoted to her amusing failures when attempting to become a model student. It’s not as if struggling with magic and her studies is new for her, but seeing her genuinely trying to engage with her lessons and failing in spectacular fashion still felt fresh. I’m surprised by how many episodes so far have served a clear purpose in the overarching narrative; I’ll admit that I would love to see more episodic content simply telling the kind of fantastic short stories their world enables, but it’s hard to complain about such a tightly constructed tale. Whether you like the direction it’s taking or not, it seems obvious that Yoshinari’s ideas for the series were very clear. It’s possible that after being constrained by two relatively short length pieces, he was dying to expand Little Witch Academia into a steady and deliberate journey. I’m curious about whether they’ll keep this up or eventually start meandering, but I’m quite enjoying the series either way. If I get more episodes with this kind of tone, I’ll accept whatever this team decides to do.

As expected, this episode marked the return of storyboards with personality. I’m being careful with my wording here because I don’t think it was a particularly great set of boards, yet they clearly left a bigger impact than the simply functional, almost robotic output of the previous weeks. There was more personal flair, recurring quirks with varying effectiveness but that definitely made the hand of the artist more obvious. And that artist is Akira “amecchi” Amemiya, Hiroyuki Imaishi’s right-hand man. LWA’s decaying magic world is obsessed with pure-blood witches, which if translated to the real anime industry and Gainax’s sphere would make Amemiya a perfect Luna Nova student. After a little bit of indie work, he joined Gainax and went on to follow a path that perfectly embodies the studio’s modern era. First clean-up work on Diebuster. Animation direction debut on Gurren Lagann. Promotion to TV anime storyboarder and episode director for Panty & Stocking. And after unsurprisingly joining Trigger, assistant series director on Kill la Kill and fully in control of Inferno Cop and Ninja Slayer. All the landmarks in his career also represent very important events for the studio(s) he’s matured in. And obviously, the influence the surrounding creators had on him has been immense. As is the case with everyone else, the company is no monolithic entity, but if you gave a name to the vague stylistic concept people have of Trigger it might as well be amecchi.

And if we’re talking about influences, there’s an inescapable figure. No matter how you look at it, Amemiya is Hiroyuki Imaishi’s successor. On an animation level he shares his timing to a terrifying degree, so while there are some differences between them (like the shape of the effects, and more pronounced poses for Imaishi) he’s one of the few artists even the trained eye can easily confuse with Imaishi. As of late they’ve been working extremely closely on directional duties, which has also shaped Amemiya’s style to be pretty much a carbon copy of Imaishi’s; there are some sequences in this episode that are so reminiscent of Mako’s theatrics in KLK that it’s hard not to smile at them. That said, I feel like looking at Amecchi as nothing but mini-Imaishi doesn’t quite paint the full picture. I know I’ve joked about his Gainax pure-blood status, but the truth is that’s always a ridiculous concept. Even Amemiya himself has openly stated that other creators have greatly influenced him, such as the mecha legend Masami Obari. And being aware of that link can grant you newfound appreciation of certain layouts he used in this episode. These things don’t happen by accident!

We’re talking about an episode of anime though, not a sterile exhibit of Akira Amemiya’s style. How did he fare, then? Decently enough, I feel. The upsides are clear – as a passionate animator himself, he does his best to include non-essential short bursts of motion whenever possible to keep up the tension. There are some scenes where the boards shows good understanding of comedic tempo, like the brilliant pause when the fish is counting its family. The snappiness seems to also come from Kimiko Ueno (who also wrote the excellent third episode) and her script though, he was clearly already working with strong material. There are some other quirks I’m not a big fan of, like the intentionally flat layouts and entities that act as carton cut-outs, but he showed some restrain with them at least. Unlike some other recent Trigger productions that have been abusing that approach (even if they try to get creative with it sometimes), in this episode it’s reserved for some silly tidbits and that keeps them amusing. A solid job overall, though it also further convinced me that Amemiya will one day have to leave his master’s shadow if he intends to shine as a director. He’ll never truly match Imaishi at his own game, because the raw kineticism and inventiveness his storyboards have is beyond most people’s reach. I hope Amecchi realizes that and eventually manages to stand on his own. But for now, this was a hilarious episode! 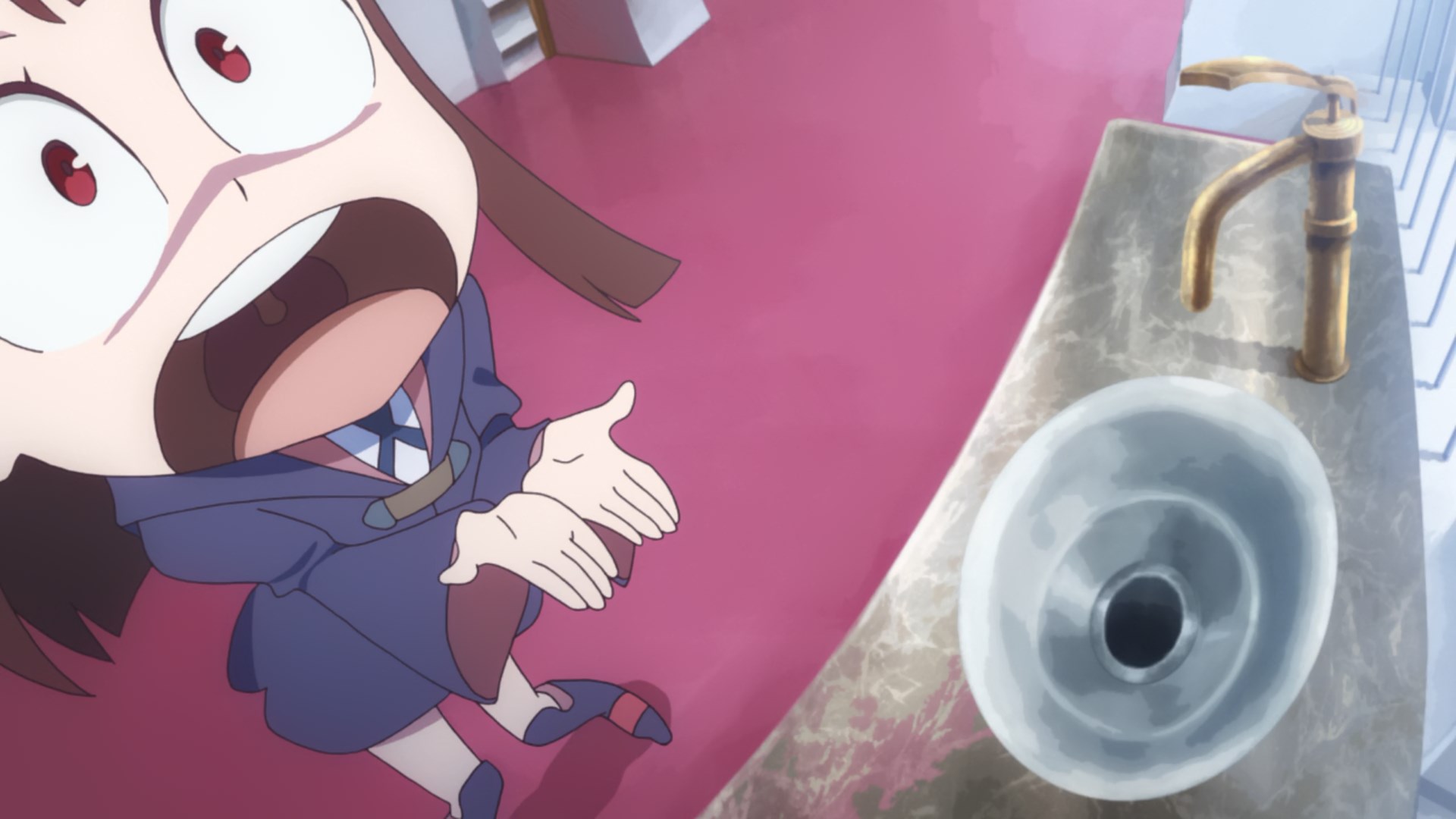 Moving onto the animation staff means it’s time to praise Shota Iwasaki’s work. Yet another Gainax child, who people might know best as Punchline’s character designer. I had expected him to show up on LWA more regularly, but perhaps he focused his efforts on polishing this episode because it might very well be the strongest animation work in the series so far…when it comes to certain aspects, anyway. He has his own tells like slightly bigger eyes and more marked facial shapes, but what really stood out was the excellent work with the expressions; the close-up drawings in particular are fantastic, perhaps the best ones a non-Yoshinari person has put out for the series. It doesn’t have the liveliness through motion that episodes like the first and third have, there’s no extravagant looseness and there’s barely any sequence with background visual fun going on. But claiming this episode isn’t expressive would be absolute nonsense – just like at these faces! I make sure to keep pointing out that there are many sides to animation direction duties, and Iwasaki has excelled at ensuring the art is high quality and oozing with emotion. And speaking of things I keep stressing out: Kengo Saito is now up to 6 appearances out of 7 episodes, with already 5 animation direction and assistance credits. I’m no longer sure he’s human, but someone please give him a hug once this production wraps up.

When it comes to the animators themselves, business as usual. Quite a lot of freelancers that hadn’t personally worked on the series before this time, alongside the small recurring team of Trigger people. That includes some inbetweeners from the studio like Reo Itoyama and Hiroki Arai doing actual key animation now, perhaps another sign that things are getting messy to comply with the Netflix deadlines. While they didn’t do particularly impressive work, the episode’s two top animators got a special separate credit for their work. The most charming sequences are sushio’s merman-Akko scenes, which he said he attempted to give the amusing kind of limited animation a 80s TV anime would have; her design seems clearly inspired by Oba-Q from Obake no Q-taro which is actually a bit older than that, but perhaps sushio is the right age to have experienced the 1985 adaptation as a kid. Either way, he did a nice job and the dorky cuteness of that design is so strong that even the LWA mangaka has fallen in love with it. Perhaps it would be better if Akko never improved at transformation magic so we get more designs like this.

Why are Toshiyuki Sato and Sushio in their own area for KA lol?

Special credits are often used to mark that someone did a remarkable/climactic scene, that they’re important guests, that kind of stuff. Aninari got the same treatment for his amazing short scene on the second episode.

Some productions, like this and this same season’s ACCA put the most relevant animators on a separated section, in this case, these were Toshiyuki Sato and Sushio, on ACCA #7 it was Shin Ogasawara, Hidehiko Sawada and Masayuki Mizutani.

There’s also other ways to do it, like giving them special credits [Yuri on Ice!!] or put them at the very top even if they did little to no work on the episode [Too many examples of this]

The separated section is the most effective though

>And speaking of things I keep stressing out: Kengo Saito is now up to 6 appearances out of 7 episodes…

Ouch! If this means he ain’t ready for C92 I’m gonna riot. Was ready for sk6 and need my Chihayas, man. 😀

If Netflix forces them to have the batches finished fairly early then he’s probably going to be done even with corrections by then! Plus really, at this point I think even his sleeping body could draw imas girls.