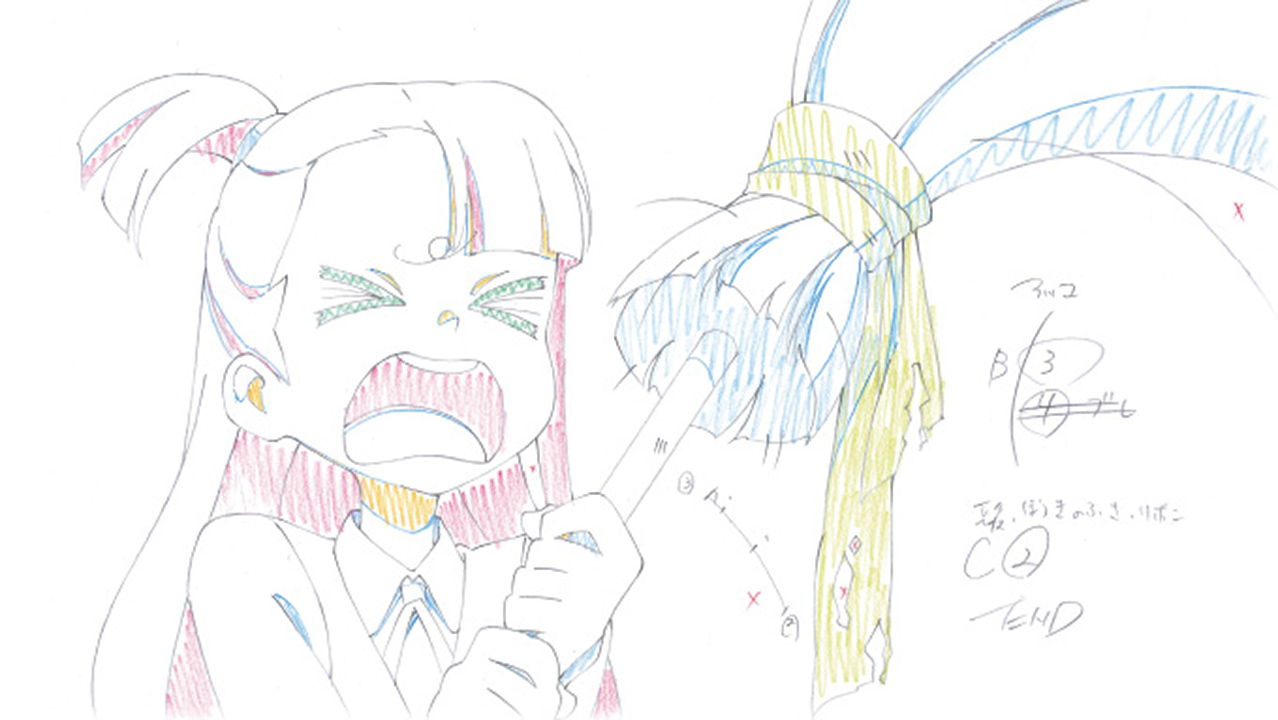 The moral quandaries and artistic issues that arise from repurposed animation, the forgotten women of Trigger and…episode? Which episode?

I suppose it had to happen. After eight consecutive weeks professing my love for Little Witch Academia TV, we got to an episode I simply didn’t like. At all. It doesn’t affect my faith on the series when it comes to its future though, this was an unfortunate yet perfectly isolated convergence of weak elements; a half-baked premise landing in an awkward zone between quirky and sentimental happened to coincide with the worst outsourced episode so far, meaning that it was hard for me to find enjoyment on any level. As of writing this we have no way of knowing the staff for the upcoming episodes – since monthly magazines with the info are about to arrive – but the series can easily recover with more robust teams handling stronger ideas. LWA’s hit ratio is still very high as far as I’m concerned, so this doesn’t worry me all that much.

For a moment I considered skipping the weekly write-up altogether, because I felt like it might be a waste of people’s time to simply say it wasn’t very good when we’ve got 25 potential slots to discuss interesting work. As it turns out though, there is material worth highlighting…even if it’s not in the usual positive sense. For starters I’d like to talk about repurposed pieces of animation, a practice that Trigger appears to be rather fond of. LWA TV had done it before so the first instance I noticed this time was simply amusing, but eventually I noticed that the episode basically had no original effects drawings; all cuts seemed familiar, taken from previous episodes and then reused ad nauseam. Beyond how ridiculous it is in and of itself, this has some iffy implications. For those unaware, the general industry practice is to pay key animators per cut drawn. That’s a nasty way to cut down costs in general, as well as an accidental counterincentive for them to put out good work – why would they go an extra mile, if in the end one rushed sequence and a very elaborate one will pay just as badly? So when an artist is poorly remunerated for one cut, seeing that effort translate into five cuts for the production is questionable at best. And of course, this isn’t the same as stock footage (which is produced as its own thing to begin with) and reused footage (immediately recognizable as such), these are drawings stealthily repurposed and that other departments will get paid for working on again. If animators were compensated according to how much time they had spent working, I believe the situation wouldn’t be as muddled, but the current system seems fundamentally incompatible with this praxis. Digital animation has only made it easier to recycle, so I believe these very complex issues are the only barrier holding back the industry on yet another cost-cutting move. We’ll see how this practice evolves.

Either way, this is such a common event at Trigger that I’m led to believe that the staff are perfectly aware and alright with it. More power to them! That’s an extra crutch for their productions without nasty issues attached…on a moral sense, that is. There’s still the other side of the problem. The Japanese production system where a single animator draws the entire layout and then animates all non-background elements give shots an innate sense of cohesion. Many people are involved in the making of every sequence, but the skeleton is conceptualized and given basic form as a whole. But when you start regularly introducing alien elements to that, friction is created. The reason I noticed all the reused FX isn’t just that I was familiar with those cuts, but that they felt like they didn’t belong in there to begin with. This is another form of the uneasiness people sometimes feel toward 3DCG elements that aren’t well integrated, even if it happens to be technically sound work in isolation. I’ve seen multi-purpose cuts that felt effective – mostly when it comes to webgen artists who are way more used to digital trickery – but I don’t think it worked at all here, despite the editing team’s best efforts. 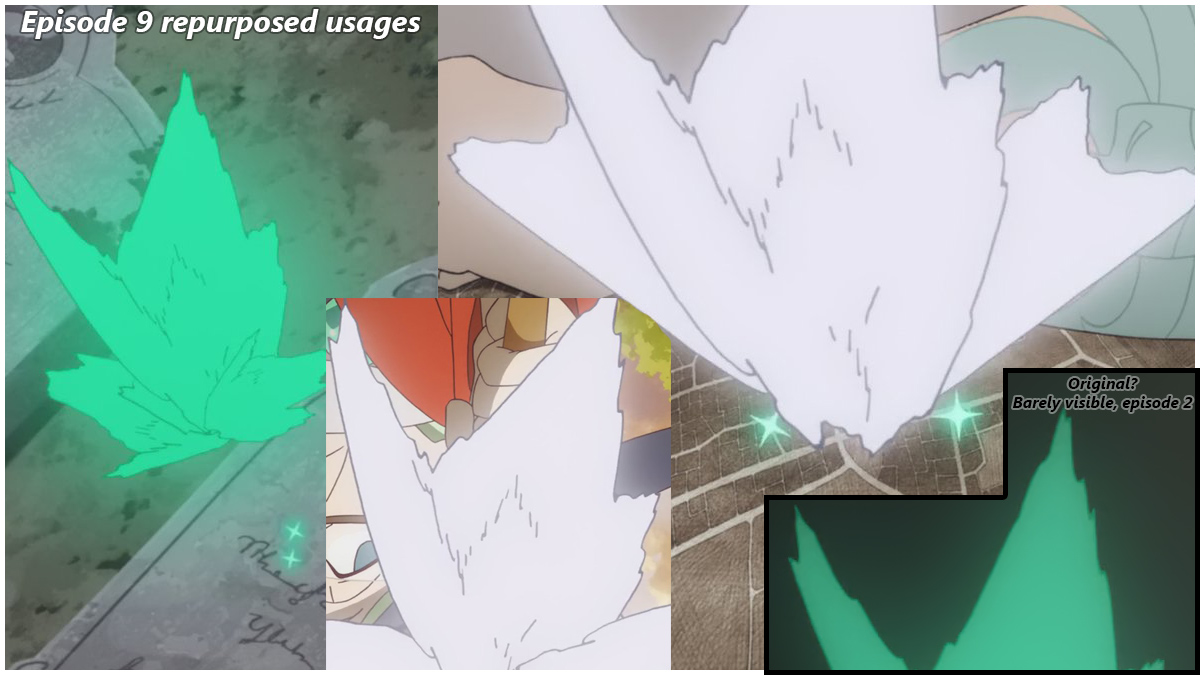 The other interesting point stems from the staff list, which as you might have noticed is a nightmarish mess. I don’t think I had ever seen two different credits for episode direction assistance in the same episode before, but the reason is obvious: it needed helpers on both Jumondou’s (the studio that actually animated the episode) and Trigger’s sides, and the staff list credits them separately. The chaos continues with a myriad of supervisors, including Kengo Saito on layouts duties – the man won’t get a break even on the episode not produced by Trigger. Having so many animation directors has a clear effect, with the characters changing looks pretty much every shot; you might notice these deviations on Akko, who suddenly has thinner and more even eyes…until they are gone by the next sequence. As I’ve been saying I don’t particularly care about consistency so I only point those out as a curiosity, but what I do care about is the quality of the drawings, and this episode was very weak in that regard as well. Only the list of key animators appears relatively sane…although even that number is telling, since it’s way too many for such an undemanding episode. Everything about this screams low priority, rushed episode.

That’s not quite what I want to focus on, however. Rie Ishige’s presence as assistant chief animation director was what tickled my fancy this time. For starters because it confirms something I speculated about back in the fifth episode; so far she’s only appeared on that role in outsourced episodes, which really seems to indicate it’s an extra layer of corrections for the episodes entirely animated at other studios to ensure some quality and consistency – if you think this episode was poor (which I personally do), imagine what it would be like without her work. And beyond the scope of this episode, there’s the fact that Ishige is a woman, a young Trigger animator you might find on Twitter talking about her beloved Show By Rock. A while back I mentioned I wanted to tackle the idea that Trigger is a Boys’ Club, which clearly clashes with the existence of people like her. To be honest though, there is truth to that belief. LWA TV isn’t dominated by the creators behind that macho spirit that permeated the popular titles of late Gainax and Trigger. Yet despite working with a different crew, it’s still men that have overwhelmingly controlled the series so far; all directors and actual storyboarders, almost all animation directors, and a proportion of key animators oscillating around 20~40%. Only this latest episode is around parity levels when it comes to the animation (with tons of female supervisors assisting the production), and this happening when Trigger isn’t in charge is no coincidence. Whether you consider that an issue or not is honestly up to you, I don’t feel like it’s something all viewers must care about. But if you do, I can ensure you that’s a studio matter rather than a project one.

That said, here’s the important disclaimer if that’s something you’re invested in: please don’t write off the women like Ishige who do exist. Your moral crusade might be righteous, but you’re doing it a disservice if you don’t also celebrate artists like her. This fame is something they inherited from Gainax, which already had this perception issue. People seemingly forgot about Shouko Nakamura and Akemi Hayashi, two incredibly delicate artists with Gainax blood who recently collaborated on the fantastic Doukyuusei film. Let’s not forget about Megumi Kouno, one of the industry’s most striking character animators who also matured at Gainax and now maintains ties to Trigger, despite being mostly busy on A-1’s projects. And I can’t believe I still have to point this out, but don’t assume that their gender and artistic preferences are intrinsically tied; Mai Yoneyama (Kiznaiver’s character designer) is without a doubt one of Trigger’s strongest animation assets, and she freely admitted she loves drawing women’s tits and ass. There’s no reason she wouldn’t fit with Imaishi’s wild crew. I’m glad there seem to be many passionate fans who care about the industry nowadays, but the amount of misinformation and disregard of nuance only makes matters worse. Be careful!

Kuga is currently working on Youjo Senki…which is Hiromi Taniguchi’s series, Gainax never dies! Even if they struggle to keep the staff at the studio.

Ouch! Well, at least Mr. Yamaga assured there is a staff secured for There Is a Reason That We Yawn… because Yoshiyuki Sadamoto sure didn’t seem like he wanted to burn himself doing everything for it!

Previous interviews have suggested that Megumi Kouno is a fan of sexy girls in some capacity as well. :3 As I’m sure you’re aware. lol Kouno: “Keeping the legs exposed helps the girls give off that fresh, young feeling. One of the main appeals of idol related stuff – for me, at least — is letting the fans feel like they can get a glimpse of what they’re not supposed to. Naturally Takao was 100% against ever letting them actually get the glimpse too, so I had to settle with just teasing it. But yeah, increasing both the sexy and… Read more »

I laughed when I saw Vividred genga and realized Kouno made sure to draw nipples on transformations even when they weren’t going to be shown. She’s real dangerous!