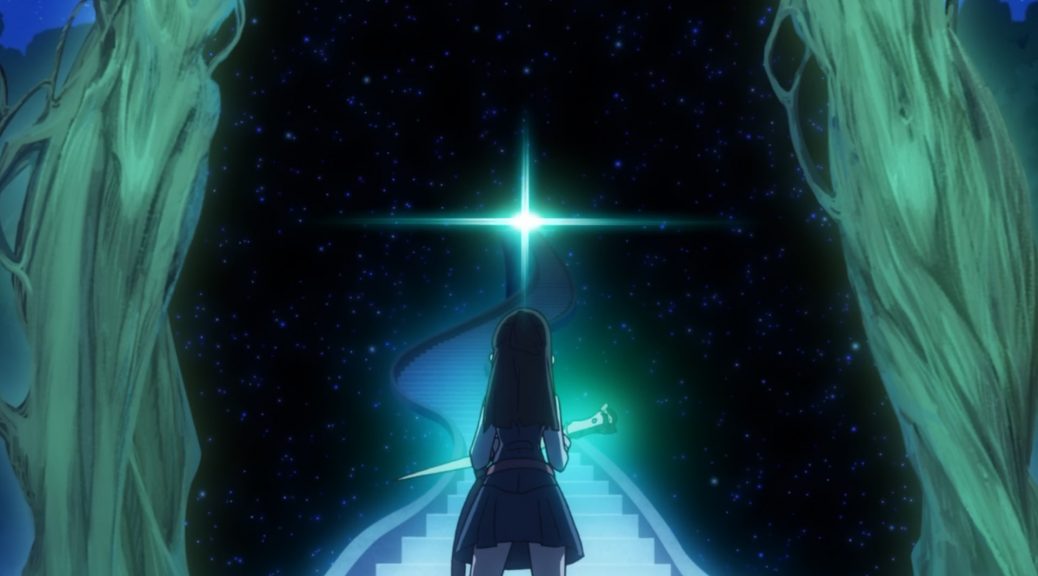 Double post – though not double length – to cover Little Witch Academia’s changing priorities, the state of its production and the interesting guest creators it keeps featuring.

As you may have noticed, I decided to skip last week’s post for this episode. The individual coverage of Little Witch Academia TV is the most extensive one we’ve featured in this site so far, which is something that I’m willing to keep up as long as I feel it’s worth it. Rather than wasting everyone’s time with a nice but not wholly remarkable episode per se, I felt like a summary attached to the next article would work best. To keep things short, I appreciated the glimpse of Akko’s wavering faith; we’ve seen plenty of her weaknesses, but the one thing that had stayed strong was her belief in Shiny Chariot as her goal. Seeing her fight her own doubts and once again reject the easy path made her feel a bit more human. I wasn’t a fan of the clumsy exposition, but I suppose there was no easy and graceful way for the show to transition into that. The series composition has been very tight but all these details have always been in the background rather than overtly stated, so now it’s a bit awkward when we have to listen to the teachers explain everything that’s going on with the world.

One thing I would like to highlight is Kasumi Wada’s presence as animation director and top key animator. She’s a notoriously fast artist, having caught the attention of the internet through a couple of series where she did inhuman amounts of work; first it was in Anpanman, where she spent many years handling outrageous numbers of cuts, and more recently Osomatsu-san, which she stepped into during its second half and acted as animation director in half of its episodes. While she is a freelance animator, she’s got strong ties to Liden Pictures – the studio where she already acted as Little Witch Academia 5’s main animation director. It’s curious to see her reprise the role on an episode technically produced within Trigger, but that’s proof of how the lines between the Ultra Super Pictures companies can blur when you’re deep into production. Various Liden substudios will keep on assisting the project even when episodes aren’t fully outsourced to them, so this is something we might see happen more frequently. And perhaps because of that, the Assistant chief animation director role reappeared; so far it had been limited to episodes entirely animated by other companies, but it seems like the reliance on other studios was significant enough to justify it in this one as well. It’s also interesting to see the character designer Shuhei Handa himself take on the role, since until now it had been other animators tasked with it. This kind of supervision work is obviously very appropriate for the person who handled the animation designs to begin with.

The lead-up to the midseason climax was another decent episode that I will cover a bit faster than usual. I’ve got some admittedly selfish complaints, like the fact that the Akko-in-Diana’s-body gimmick was used as a brief plot device rather than the premise for a full-on comedy episode that I feel could have been a lot of fun. But besides that, it’s simply hard to judge it individually when it’s so reliant on what’s coming next. This might become the norm from now on, as even Yoshinari himself has stated that the second half of the series will be a lot heavier on explicit storytelling. We haven’t gotten to that point yet, but it’s clear that LWA TV is pivoting towards it. The series’ structure seems thought-out enough to support multiple recurring threads even when they’re not the focus, but we’ve yet to see if it can maintain its strengths as an overarching narrative. It feels like it’s coming a bit too late for viewers who wanted that to begin with, and also could alienate those who have made it this far but wanted more fun episodic content. I’m at the very least curious about how this will turn out.

One name clearly stands out this time, the storyboarder Ryoji Masuyama. His Gainax origins (first key animation in Gurren Lagann, animation direction in Hanamaru Kindergarten, and stoyboard debut in Panty & Stocking) should tell you it’s no big surprise that he’s working on LWA – he even drew Akko for the feature on Trigger’s 2017 plans! Rather than stay with them though, his career has majorly been linked to the corpuscle of ex-Gainax creators working at A-1 Pictures. Vividred Operation, Occultic;Nine, and of course The Idolmaster, where he’s even gotten to the point of co-directing Cinderella Girls, have been the kind of projects keeping him busy. Since that crew doesn’t have a very immediate main project though, it seems like he found time to go assist some old pals. And he did, as usual, a more than acceptable job; the sequences with the mirrors stood out in particular, allowing a resourceful director like him to play around a bit more. His work with Trigger has been extremely sporadic, but assuming he’s not already booked (perhaps with work on SideM?) we could see him return once more.

On the animation front, the clear highlight is the insanely strong final unit in the credits. Hori, Aninari, sushio and Yoshigaki aren’t just right about the best animators this series can attract, they’re amongst the best the industry has to offer. Their presence is rather misleading though, since felt like a fairly low-priority episode before they presumably go all-out with the first cours climax. I’ve already talked about Hori constantly animating Shiny Chariot’s magic being an excellent touch, since he’s an effects master and that continuous presence gives her powers a sense of cohesion. Similarly, Aninari returned to assist his brother by once again animating the statue briefly coming to life – back in the second episode I mentioned it felt like Yoshinari came up with the idea already thinking of his older brother, which makes even more sense now. Besides that, the intro (perhaps where sushio and Yoshigaki worked?) had two delightful loose sequences…but that’s it, really. The rest was on the rougher side, stiff work that clearly wasn’t as important as what’s coming next. So look forward to that I suppose!

I was wondering where’s the past two weeks’ LWA coverage… I do like episode 12. Though not as strong as we might wish it to be on the animation side, it’s quite entertaining, and I’m relieved to see the series back on its track. I was worried that the series may become a poorly timed series that doesn’t know what it want to be, but episode 12 assured me that they know exactly what they want to deliver in this series. I cannot wait to see Akko learning to be more responsible, and improving as a witch.

I thought it was perfectly serviceable, but again, it mostly felt like preparation for next week’s climax. So far my enjoyment of each episode has been uneven, but what’s stayed consistent (even in gag episodes) has been the buildup towards Akko’s growth. That’s something the previous iterations of LWA simply couldn’t do, so I’m glad they’re taking format specificity into account here. In the end it would take a simply miraculous second half for me to put the series on the same level as the first OVA, but LWA *TV* making good use of its length is something I appreciate.