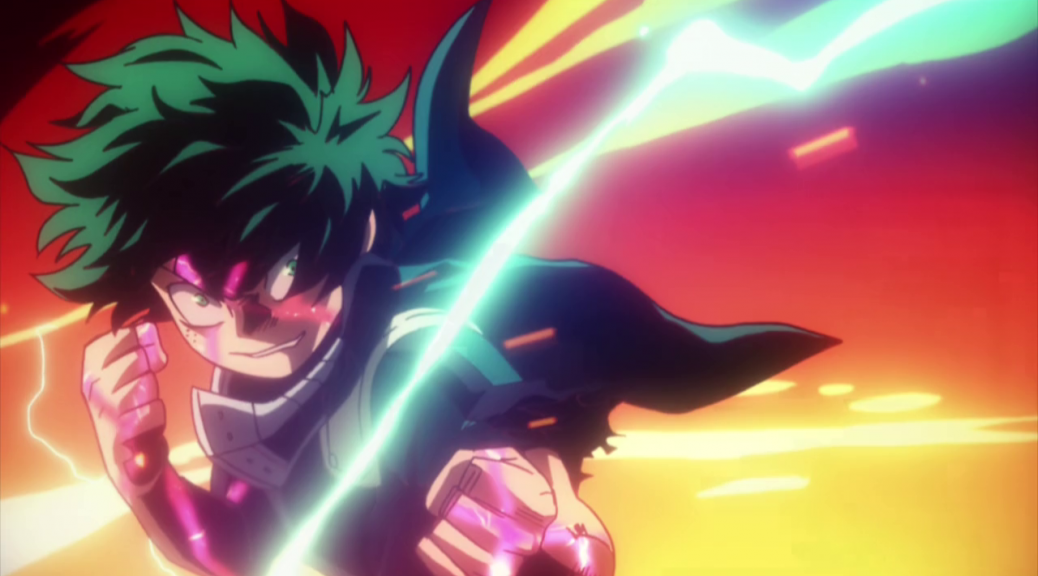 Back in December, we wrote a post detailing HeroAca‘s production, the issues the staff suffered throughout the animation process but also the highlights of their work. Wouldn’t it be a shame if we didn’t follow that up with weekly posts for the sequel? Fret not, it’s time to start covering the return of BONES’ Hero Academia.

The first episode of season 2 confirmed many of my suspicions mentioned in the Spring season preview.  For starters, the production of the series was as ahead as it seemed, which has a very noticeable effect on the show’s polish and the thoroughness of its animation. It’s also worth noting that just like I expected, the animation process has completely moved from BONES’ sub-studio A to sub-studio C. Its new production desk Tatsuya Saito (replacing studio A’s Koji Morita) and production assistants are tied to studio C, and were working on Concrete Revolutio during season one’s production.
The change resulted in new animators joining the show, including veterans like Yoshiyuki Kodaira and Kazumi Inadome. The first episode’s animation directors Takahiro Komori and Tsunenori Saito already had worked on the first season and it looks like they’re staying for the sequel too – while we’ll see plenty of new faces, it’s not as if there won’t be returning staff as well. Komori’s presence is not very surprising; within his latest four projects, he has traveled across all four BONES sub-studios. Saito however isn’t a name one would associate with C studio: this is the first time he has worked there since Fullmetal Alchemist: The Conqueror of Shamballa in 2005. Either way, both are fairly high-profile animators at BONES so it’s good news to confirm their continued involvement with this project. You might be acquainted with Takahiro Komori as the character designer of Darker than Black series. He’s also a member of the company’s board of directors, together with CEO Masahiko Minami, animator Toshihiro Kawamoto and producer Yoshihiro Oyabu. Tsunenori Saito’s own claim to fame was providing character designs for Sword of the Stranger movie and working closely with director Masahiro Ando.

If we look at the key animation list, the nicest surprise was without a doubt Yoshihiko Umakoshi’s acquaintance Junichi Hayama. He’s actively working as action animation director on Tiger Mask W at the moment, a series that Umakoshi drew the entire ending sequence for. While they’ve been good friends for many years, it feels like Hayama’s appearance here was a bit of payback for that. He presumably animated the pre-opening scene with Izuku fighting a group of villains. It was by far the most outstanding piece of animation in this episode, and you could see Umakoshi had lots of fun correcting the hell out of Hayama’s drawings; you can even see the results of that as they were displayed at BONES’ Anime Japan booth last month.

The episode itself was rather slow and served as a re-introduction to the series and warm-up for the things to come. Despite being preceded by an episode 0 that was a proper recap of the first series, they went an extra mile to make sure no new viewer would feel alienated after the show’s network change. That is irrelevant to everyone reading this so it likely won’t justify any mild annoyance you could have felt by such a retreading start, but the importance of HeroAca‘s move to ytv/NTV can’t be understated. What was evident and definitely more positive was the improvement of the animation quality compared to the first season, mainly thanks to the show’s production schedule being fairly ahead. Very polished drawings and lots of movement added charm to the character interactions. On the same note, the director Kenji Nagasaki included nice little character moments in the storyboard that made the classroom feel alive. The animation also brought out some mannerisms of the characters. The most evident case was Iida’s constant gesticulation, something that wasn’t well articulated in the first season. The amount of character animation was certainly the biggest surprise this premiere offered. More of it please!

Next episode is going to kick off the sports festival with a bang. As we already know thanks to the promotional footage and previews, Yutaka Nakamura will make an appearance and that’s always a thing to look forward to!

This opening seems to have spawned surprisingly intense arguments. Some people like it more than its predecessor, while others simply find it boring. Since this cours will be focusing on a sports festival, I feel like it’s a very appropriate intro. But beyond that, personally I found it a very pleasant surprise to have Yasuyuki Kai back on the director’s seat. While he’s always been a freelancer, he used to be a regular figure at BONES studio C at the time of shows such as Darker than Black, Soul Eater, and Star Driver. This marks his return to the studio after he exclusively worked on all three seasons of Haikyuu!! from 2014 to 2016, doing an excellent job as action animation director. For season two, he even directed the fan-favorite second opening.

His experience with sports gained during Haikyuu!!‘s production was put to use in this sequence. After all, half of the opening featured students stretching before the start of the festival! Kai isn’t afraid of using various difficult angles in his storyboards to keep things interesting; a bit more troublesome for the animators, but excellent for the viewers as long as the drawings are up to par. Haikyuu!! often used 3DCG backgrounds for its dynamic volleyball matches and Kai decided to implement this into My Hero Academia as well. The shot of All Might flying across the city was arguably the most interesting cut in the OP from an animation standpoint because of that. 3D backgrounds can become very distracting when used excessively, as seen recently in Alice & Zoroku‘s introductory episode. This is why the composite and CG team at studio BONES decided to use 3D backgrounds only for the first half of the cut, and then rather stealthily transition to ordinary anime backgrounds using the bridge in the foreground. A threedimensional effect was then preserved through the now hand-drawn bridge fading into distance. The final result was very impressive in my opinion!

A good number of outstanding animators was assembled for this opening sequence. Itsuki Tsuchigami, who handled some of the most striking bits of animation in the first season, returned for the opening. Hopefully he will work on this season at least as much as he did on the first. Hironori Tanaka animated the tragically short cut of Iida running in the arena. Haikyuu!!‘s other action animation director Hideki Takahashi showed up to help out his former colleague as well. Toei’s Yuki Hayashi, under his usual pen name Koichi Hayashi, presumably animated the short cuts of our main characters near the end – their bouncy movement should be the giveaway. The talented ex-Wanpack duo and studio C regulars Takashi Mitani and Masaya Sekizaki also joined the party.

This low-key and fairly stylish ending sequence was mostly handled by two women. It’s nothing spectacular, but I appreciate the mix of delicate drawings with the roughness you would expect from an action series like this. Naomi Nakayama hadn’t worked with studio BONES in the past, so we can only speculate how her involvement came around. It’s possible she’s acquainted with Yoshihiko Umakoshi because she worked as the assistant director on Shigeyasu Yamauchi’s Casshern Sins. Her most recent work was alongside Hiroshi Hamasaki on the Orange TV series as a series director; credited in katakana (シリーズディレクター), while Hamasaki was the usual kantoku (監督) who had the ultimate say.

On the other hand, Hitomi Odashima’s involvement doesn’t come as a surprise, as she’s been frequently involved with studio C’s productions. She’s now credited as character design assistant in the opening, which makes her the only major staff addition for the second season. Even though she wasn’t directly involved in season one’s production because of Concrete Revolutio, she drew some magazine illustrations for the show. Her animation work is very refined so I’m looking forward to the inevitable episode with her as the animation director!