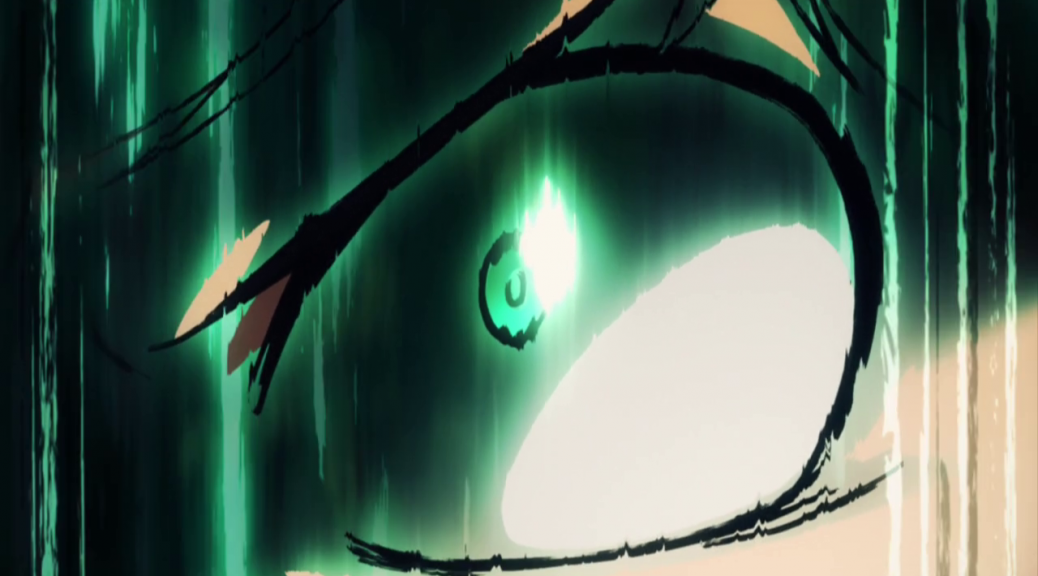 Don’t misunderstand me – I did like the first episode. But this was the return of HeroAca we were waiting for!

Sub-studio C regulars Yoshiyuki Kodaira and Takashi Murai took on the animation direction duties for this episode, which means it’s time for some anime industry history. In the second half of the 90’s, a young Kodaira was working as an animator under Studio Takuranke (later Animeya Honpo) on Sunrise studio 2 projects such as The Vision of Escaflowne and Cowboy Bebop. When producer Masahiko Minami and his team decided to leave Sunrise and form studio BONES, Animeya Honpo continued to work for them on their first original anime Hiwou War Chronicles. After this project, Animeya Honpo was disbanded and Kodaira’s senior Hiroki Kanno went on to join BONES. Kodaira then worked as a freelancer on various projects until Kanno’s appointment as animation character designer on BONES’ Rahxpehon (2002). This is where Kodaira had his animation direction debut and fully established his ties with the studio, which allowed him to keep on appearing on their projects even without Kanno’s involvement. Since Eureka Seven (2005), he’s been working for BONES exclusively, and currently both him and Kanno are employed by the studio; working under the same roof just like in the 90’s! Murai’s story on the other hand is nowhere as intricate. After many years of freelancing, he simply joined BONES studio C during Darker than Black‘s production.

Kou Matsuo provided the storyboard for this episode, returning to the show for the first time since the first season’s sixth episode. He’s a rather big name in the industry, having directed projects such as Kurenai, Valvrave the Liberator and Gundam Thunderbolt. He’s first and foremost known for his specific approach to music and sound direction, sometimes demanding voice actors to record their lines before the animation production; a practice known as pre-scoring, in contrast to the usual after-recording. I thought the sound direction in this episode was better than usual, though that likely wasn’t due to his involvement. Still, a nice coincidence! His storyboard was decent and mostly stood out at the beginning of the episode during Izuku and Allmight’s conversation. The episode director Tomo Okubo is a former Sunrise employee and acquaintance of the series director Kenji Nagasaki. He directed multiple episodes of Gundam Build Fighters and worked as the assistant director on Classroom Crisis. On HeroAca‘s first season, he directed the opening and episode 13. Similarly to many of season 2’s staff members, he was mostly busy with Concrete Revolutio during season 1’s production.

A couple of interesting names popped up in the list of key animators. Kosuke Kato, a young Kanada-style animator who shined on Mob Psycho 100‘s eigth episode and recently Akiba’s Trip‘s twelfth episode, animated the training montage of the students. There are many animators who sport this kind of snappy timing, but the shape of his effects gives his work a rather unique feel. He previously did 2nd key animation for the excellent intro of episode 14 and judging by his twitter account with many HeroAca illustrations, we can expect him to appear regularly. Masaya Sekizaki, who has already confirmed his continuous involvement with the second season, worked for the first time within an actual episode. Also noteworthy is the presence of the veteran Takaaki Wada, who recently animated a stunning transformation scene for Kirakira PreCure. And last but definitely not least, the obvious highlight: Yutaka “yutapon” Nakamura, one of the few animators in the industry recognized even by the general foreign audience. His scene – shown above – was as usual a sight to behold. Most animators have to carefully follow the storyboard unless the episode director allows them to express their ideas; it’s not that they’re particularly restricted, but as a general rule they’re not supposed to allow their ideas overshadow the storyboard unless they’re explicitly allowed to. But Nakamura’s scenes, probably thanks to his status and skills, more often than not depart from the original boards rather notoriously. As a result, his works have peculiar sense of staging and scale. One cut in and you can immediately recognize his work, even if you’re not the kind of person who tends to examine character art. The cube-shaped debris and organic FX are his famous tells, but the special feel of his sequences is noticeable before those arrive. We are going to see more of him on My Hero Academia in the future, which I will be patiently waiting for.