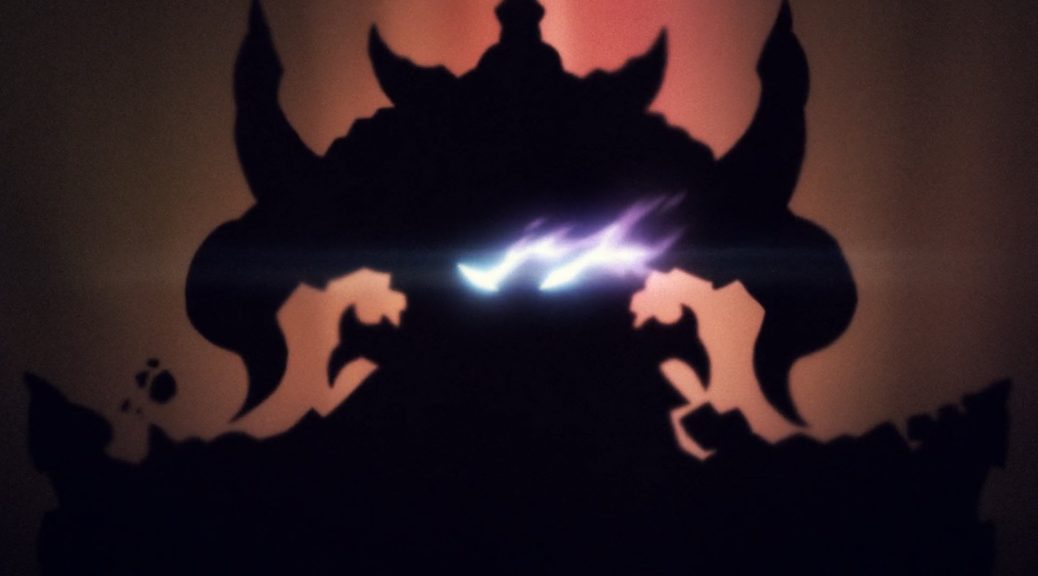 We’re back with our regular feature exploring the most fascinating opening and ending sequences of the anime season that has just begun; their thematic strengths, the staff that produced them, all those neat pieces of insight you hopefully will appreciate. Let’s go!

Direction/Storyboard: Noriyuki Abe
Animation directionAnimation Direction (作画監督, sakuga kantoku): The artists supervising the quality and consistency of the animation itself. They might correct cuts that deviate from the designs too much if they see it fit, but their job is mostly to ensure the motion is up to par while not looking too rough. Plenty of specialized Animation Direction roles exist – mecha, effects, creatures, all focused in one particular recurring element.: Tetsuya Nishio
Key AnimationKey Animation (原画, genga): These artists draw the pivotal moments within the animation, basically defining the motion without actually completing the cut. The anime industry is known for allowing these individual artists lots of room to express their own style.: Hiroto Tanaka, Yuko Matsui, Ayako Sato, Ichiro Uno, Noriko Otake, Fumiyo Kimura, Huang Chengxi, Tatsuya Koyanagi, Yoko Suzuki, Daisuke Tsumagari, Megumi Tomita, Haruki Nakagawa, Masaaki Funae, Kenichi Fujisawa, Yukie Yamamoto, Tetsuya Nishio

No matter how they feel about the series as a whole nowadays, many people still fondly reminisce about the early days of Bleach and that fresh, urban feel it had. This was something present in the manga to begin with, but it got notoriously amplified through Noriyuki Abe’s lens in the anime adaptation. Boruto’s opening captures that exact same feeling, to the point I’ve noticed fans who weren’t aware of the shared director pointing out the similitudes. Its style seems coherent on a thematic sense as well, since one of the major points of the series appears to be its modernity; the ninja world rooted in the past appears to be decaying as technology advances and cities flourish, making this sequence feel particularly fitting.

On a pure aesthetic level, the opening sits somewhere between the aforementioned Bleach and his pop Tsuritama intro; he’s a man of many registers as you would expect from someone with his experience, but since his last major work I had experienced was the overly somber Arslan, seeing him return to bright and bold palettes was a delight. His approach to the credits is also worth noting: while some directors like Yasuomi Umetsu and Masashi Ishihama have mastered the art of fully integrated in-universe credits, Abe decided to take the opposite path: highlighted rather than camouflaged, clearly visible, yet always cohesive. The animator lineup, led by Tetsuya Nishio as you would expect, features many of the show’s aces like Hiroto Tanaka, Huang Chengxi and Kenichi Fujisawa. It’s not motion that makes the sequence special, but the action relay presenting everyone’s basic abilities is quite nice nonetheless. It’s a franchise tradition to feature strong opening and endings, and this is as solid of a start as it gets for Naruto’s successor.

StoryboardStoryboard (絵コンテ, ekonte): The blueprints of animation. A series of usually simple drawings serving as anime's visual script, drawn on special sheets with fields for the animation cut number, notes for the staff and the matching lines of dialogue. More: Yoh Yoshinari
Animation: Masanobu Hiraoka

One of the reasons I loved the first ending sequence of Little Witch Academia TV was that it perfectly encapsulated the joy of magic. It explored its fantastical setting through a series of illustrations that featured the characters stumbling around its world and the amusing situations it enables; in the sense of making you want to have a magical adventure, or simply observing theirs, it was arguably better than the show itself. The second ending does away with that entirely, which would be a shame had it not been replaced by something even more impressive. The self-taught indie sensation Masanobu Hiraoka is becoming a recurring character in these write-ups, which I can only parse as excellent news. While in the first LWA TV ending his work served as eye-catching flair, here it takes the center stage. The sequence this time around portrays Akko chasing her dream – being fascinated by Shiny Chariot’s spectacular magic, trying to mimic it herself and flying towards her goal. And much like within the show itself, when she’s down it’s her idol that pushes her forward again.

As I mentioned last time, there’s inherent synergy between Yoshinari and Hiraoka as aqueous effects are both of their forte. It’s no surprise that the former made Shiny Chariot’s magic a spectacle of ever-morphing forms to begin with, and that further enables sequences like this. If the first ending sold the charm of Little Witch Academia’s world, this one embodies how inherently enchanting magic is. I haven’t been much of a fan of the show’s openings, but this has more than made up for it.

Direction/Storyboard: Takuya Sato
Animation directionAnimation Direction (作画監督, sakuga kantoku): The artists supervising the quality and consistency of the animation itself. They might correct cuts that deviate from the designs too much if they see it fit, but their job is mostly to ensure the motion is up to par while not looking too rough. Plenty of specialized Animation Direction roles exist – mecha, effects, creatures, all focused in one particular recurring element.: Masahiro Fujii
Key AnimationKey Animation (原画, genga): These artists draw the pivotal moments within the animation, basically defining the motion without actually completing the cut. The anime industry is known for allowing these individual artists lots of room to express their own style.: Yuji Takagi

It would have been easier to feature a bombastic sequence like the Attack on Titan opening. That could have genuinely earned its place here thanks to pieces of animation like Arifumi Imai’s work, which embody the kineticism of the show’s action at its best. As much as that immediately grabs people’s attention though, I have to admit I have a soft spot for more low-key work like this: a sequence that succinctly sums up the protagonist Sana’s feeling of wonder while walking around the outside world for the first time. This cute, simple yet effective ending was handled by Takuya Sato, whom you might know as the co-director of Steins;Gate and the person in charge of the original Wixoss series. You might even be acquainted with his directional debut Niea_7, though few people seem to be aware that was his work. As an artist of many talents (he even undertakes major writing roles regularly) he has directed other ending sequences in the past, but this is quite the stylistic departure for him – in a positive sense, of course!

And since I’m to some degree covering this to highlight underappreciated work, I couldn’t not talk about the key animator who drew the entire sequence. Yuji Takagi has been in the industry for close to a decade, and yet this is his first identified piece of animation. Just like him, there are dozens upon dozens of talented artists working in anime who get no recognition whatsoever, and sometimes it’s simply because they haven’t been given an opportunity to show off their skill. His whimsical walking cycle, and the effects at the beginning in particular, prove that this was the case for him as well. Being on the lookout for overlooked creative voices is the least we can do.

Let’s round up this mini-series of solo animated sequences with a true one man army opening – not only that, since the person who created it all was also fully responsible for the show’s ending. If I had to pick either of Hiroyuki Moriyama’s sequences for the show though, the opening is an easy favorite. Hiroyuki Moriyama is a CG artist working at OFFICE D.+ and affiliated with A-1 Pictures, where he has done all sorts of digital work – 3DCG, composite effects, even director of photographyPhotography (撮影, Satsuei): The marriage of elements produced by different departments into a finished picture, involving filtering to make it more harmonious. A name inherited from the past, when cameras were actually used during this process. in some instances. With this opening he was given a chance to prove his mastery of editing, as well as providing him an outlet for actual creativity he didn’t have before. Striking shots come and go but don’t overstay their welcome, since the transitions themselves are the star of the opening. He even managed to sneak in some neat nods! Nothing about this sequence resembles the traditional concept people have of a good anime opening, and yet it manages to leave a strong lasting impression. Let’s keep on embracing the range animation offers us.

Due to production shenanigans and not-so-stealthy broadcast delays that we’ve talked about more than enough, here I am including an opening that was first revealed about 3 months ago. A choice I feel is perfectly justified because Granblue is airing this season, and because the sequence itself is marvelous. Silhouettes are a well-known favorite of Masashi Ishihama, but despite his clearly defined style he never approaches an opening quite the same way. This time he focused on making its fantasy land, covered in fog and shadow, equal parts hostile and mysterious and thus worth exploring.

The lineup of animators is rather impressive: the show’s action ace Kazuhiro Miwa is accompanied by the likes of Hiroshi Tomioka and Akira Hamaguchi…and yet, there isn’t much movement to be found. Despite being an excellent animator himself and obviously valuing the power of motion as a director, Ishihama doesn’t seem to rate spectacular setpieces very highly when it comes to his openings. It’s not as if the excellent artists were wasted, as the refined drawings supervised by Ishihama himself prove, but he simply doesn’t subscribe to the idea that intros are meant to capture the viewers through highly kinetic cuts. I don’t want to call those the easy way out since that’s denying the skill it takes to properly execute them, but his goal does seem more complicated and yet he accomplishes it in seemingly effortless fashion. This opening was shaping up to be my personal favorite of the season, to the point it made me wonder just who had what it takes to surpass Ishihama. Let’s make the answer to that the cliffhanger to be revealed next week on Part 2!

“This opening was shaping up to be my personal favorite of the season, to the point it made me wonder just who had what it takes to surpass Ishihama.”

I’m not supposed to spoil the surprise by saying yes! Wait…

Oh snap. I didn’t realize Ishihama was doing that Granblue OP. It really is marvelous. Ishihama’s aesthetic tastes really match mine so incredibly perfectly, I might have to watch some of the show just so I can sit through this a few more times.