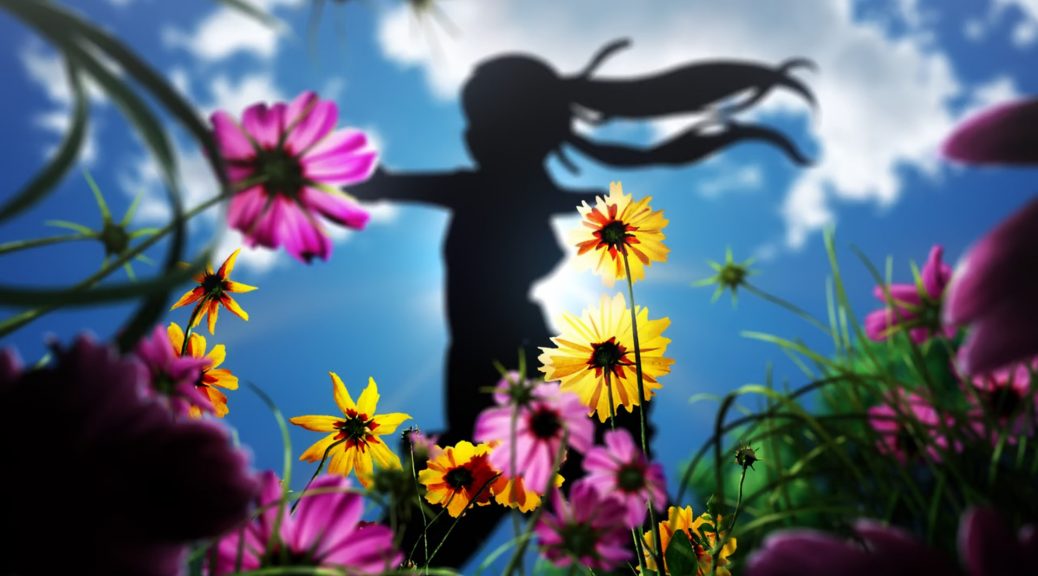 It’s finally time for Part 2 of our selection of impressive openings and endings! Established specialists in this field, promising young geniuses, and even sequences that go beyond people’s usual conception of animation.

I ended the first half of the seasonal rundown of intros and outros by posing the question of who would be able to beat Masashi Ishihama’s work on Granblue Fantasy and capture my heart the most this season. I already knew the answer, and apparently so did most people who are aware of my weaknesses – it was Masashi Ishihama himself. His second surprise offering this season is easily my favorite, and as far as I’m concerned his strongest OP since Yama no Susume. The fact that Ishihama can put out two openings in the same season that share few elements yet feel so distinctly like his work speaks volumes of his resourcefulness; sure you can pinpoint known tricks of his like the digital grain, silhouettes and the processed backgrounds that greatly resemble Occultic;Nine’s, but this time there’s two clear focuses: the smooth transitions, and the usage of accented monochromatic shots. It’s not as if those are aspects he hasn’t experimented with before – au countraire – but it’s his ability to rearrange his puzzle pieces and create new cohesive aesthetics that make him a highly regarded expert in this field.

The idea of other people bringing color to your lifeless gray world is hardly new, but again, conceptual inventiveness isn’t always required when you have his exquisite sense. Much like Granblue’s case, the animation itself is relatively unexceptional; I get the feeling that if he’d had more time, he would have animated it all himself and we’d see more attractive loose drawings like the ones at the end. But I’ll spare you more Ishihama adoration since I’ve already done that, and will surely do it again in the future!

While Saekano Flat’s intro is my unsurprising personal favorite, this was the opening I was the most excited for, and ultimately the one that impressed me the most. We all knew that Bahi JD’s directional debut would be synonymous with striking animation with mostly digital sensibilities. Even the presence of both entirely new talent and industry legends was no big surprise, considering his own preferences and Signal.MD’s motto. What I wasn’t ready for was the delightful palette however, which puts to shame the show itself – hence why we made sure to ask him about the color work in this exclusive interview with Bahi you should all read. A perfectly serviceable storyboard that allowed top animators to challenge themselves, well complimented by such pleasant design work. Nothing to complain about, as far as I’m concerned!

I’m very fond of this sequence, but I like what it represents even more. This is the opening a modern sakuga fan would want to direct, featuring a list of animators that includes tons of fan favorites that serve as inspiration nowadays. As a production endeavor it also embodies the particular kind of networking that supports the most impressive webgen projects, especially those that are sort of indie. If you asked people in the know a handful of years ago if Bahi would end up directing an opening they might have laughed, but ATOM’s OP is exactly what they would have imagined he would want to make. And that he did. Industry tales are often depressing, but here’s a sweet one. The teenager who excitedly posted on sakuga MADs has now directed a piece of animation featuring the foreign artists he revered.

I’ll be frank and admit that when it comes to this series, I actually prefer the cute videogame-inspired ending sequence. I figured people would be more interested in the OP helmed by one of the directors getting the most attention within these circles of the fandom though, and it’s not as if this opening is without merit. Much like in Ishihama’s case, Sayo Yamamoto’s repertoire is filled with very distinct tricks that she can constantly combine to create something that doesn’t feel like gimmicky retreads. The bold combination of red with black and white is very reminescent of her Persona 5 opening, a link many viewers won’t have missed since the release timing caused that to still be fresh in people’s minds. Sexuality as an actual asset rather than simple eyecandy (which I have nothing against, people preemptively writing angry comments) has been a recurring element on her career as well, and Nina’s nakedness doesn’t come off as self-indulgent; not only is the series explictly about her sexuality, but learning to be comfortable in her own skin appears to be the goal she’ll have to chase. Even the very dynamic typography serves clear framing purposes, which amplifies the opening’s ability to create striking imagery even further. As far as I’m concerned these evocative screenshots might be the best way to experience it though, since the sequence in motion fits the song to a fault – it’s busy and chaotic as intended, but I can’t say that makes for a very pleasant watch. Definitely one of Yamamoto’s lesser attempts.

Besides the project’s de facto ace FX animator Shinsaku Kozuma, the very long list of animators features other stars like Eiji Komatsu and Takahiro Kigami. But truth to be told, and this is another of the shortcomings of the opening, the animation itself can’t seem to keep up with the very demanding ideas when it’s at this most hectic. So far the Rage of Bahamut sequel has been an extraordinarily polished project for MAPPA’s standards, but Yamamoto’s curse when it comes to the actual execution lagging behind her fascinating ideas still perdures. Perhaps a certain theatrical project will put an end to that.

Sometimes the most simple ideas are the most effective ones as well. Grimoire of Zero‘s ending succintly sums up its character dynamics and their peaceful adventure…whenever they’re not getting involved in a war between humans and witches, that is. This fully digital piece of animation was all drawn by Niki Izumoto, one of the lesser known but nonetheless very interesting webgen artists. Nikki‘s approach was very economic with the drawings, but that’s how he was capable of creating fascinating effects; the likes of Shingo Yamashita have praised his delicacy, comments that as it turns out weren’t misguided. Sequences like this in particular are a good reminder that animators who willingly stray away from fluidity and achieve impressive results only possible through that path also deserve admiration.

You might have noticed I listed a photography role that I tend to omit, and that more often than not isn’t even credited for these sequences to begin with. Rather than simply slapping all assets together though, Tatsuya Fukumoto’s command of the composite is one of the most important elements here. He’s the person responsible for its noticeable yet never obstrusive textured feel, a style he’s been refining when working alongside Nikki. If this gets more people to check out their work, I’ll consider my role fulfilled.

Let’s wrap this up with an ending that will likely be overlooked by the public at large. Aku no Gundan is a deceptive charming production: it might seem like an unambitious yet cute short series, but it becomes quite the interesting project if you pay attention. For starters there’s the fact that its original author is none other than Sora Tokui, a rather famous voice actress that Love Live fans will surely be acquainted with. Its anime adaptation is yet another Tatsunoko production experimenting with digital manufacturing, this time to the point they’re boasting that no paper was used as it was a 100% digital process. They’ve even got a partnership of sorts with TVPaint and Wacom, and their results have been more than respectable. Its ending departs from the norm even more, since it’s a series of stop motion cuts filmed using different kinds of props, from clay to various 2D cutouts. Sadly the actual artists weren’t credited for it, but at least the studio’s website offers some clean pictures of the sequence.

I like to end these with a list of honorable mentions, since there’s only so many openigns and endings we can tackle. I can forget of Ryosuke Nakamura’s work in Natsume Yuujincho, which might not integrate Mieko Hosoi’s jaw-dropping illustratrions as organically as their magnum opus, but still nails the warmth of the series. As mentioned by my colleague during the coverage of HeroAca, its opening director Yasuyuki Kai put his long experience on Haikyuu to good use to portay the training routine that defines this sports-based first arc. And speaking of fitting sequences, The Eccentric Family 2’s opening might be composed of reused footage edited by the always trustworthy 10gauge, but its usage of Kyoto settings couldn’t be more on-point considering the role the city plays in the series. I would like to give some credit to Eromanga-sensei as well: its ending solo key animated by Shu Sugita is just adorable, whereas the opening marks another outrageous feat for the precocious genius ちな who got to direct the sequence at the age of 21; quite the lineup of animators came to his aid, and while the opening itself is simply pleasant, its mere existence as a young achievement within a high profile title is already noteworthy.

I was not expecting that Saekano Flat OP to be that good! I’m impressed with the smooth transitions and the colour palette, and after learning that Masashi Ishihama directed it along with the OPs of Yama no Susume Season 2’s first OP, I spent a great deal of time looking at many of his other works. I can definitely see the parallels between the OPs for Occultic;Nine, Yama no Susume, and Welcome to the NHK and they’re all fantastic! The OPs for Occultic;Nine and Yama no Susume are among my favourite OPs, especially Susume’s, since the song is so fun… Read more »

I’m glaw you discovered Ishihama, as far as I’m concerned he’s the best active OP specialist. I would love for him to get another directional chance like Shinsekai Yori, but having him in high demand when it comes to this is far from a tragedy.

Another Ishihama show seems eventually inevitable considering how talented he is (and hopefully, that will also mean more active Yamauchi). But at the moment I’m really hoping that he is/will be involved with the new R.O.D animated project which is ambivalently “under consideration” at the moment. Would love to have him back to the franchise as CharaDesigner and Chief AD again.

Something that oddly enough didn’t come to mind until just now for me.. do OP/ED directors ever have a say in the song that is used in their work? Is there ever much co-production going on between the artist, music producer, and animation staff? Or is this mostly just a case of the song being pre-chosen and the directors working with what they are given? Also, always great to hear you talk about Ishihama. It’s possible you even remember me talking about it in previous comments, but I’ve been unabashedly in love with the guy ever since he blessed the… Read more »

Not unless it’s also the series director and they happen to have input on that level – there might have been a weird set of circumstances like that, but I can’t recall any. For pretty much any TV series, the song is an asset given to the staff for them to make a sequence around.

And I’m glad you enjoy reading about Ishihama, because I enjoy to keep on writing about him…mostly because that means he’s still making new stuff!