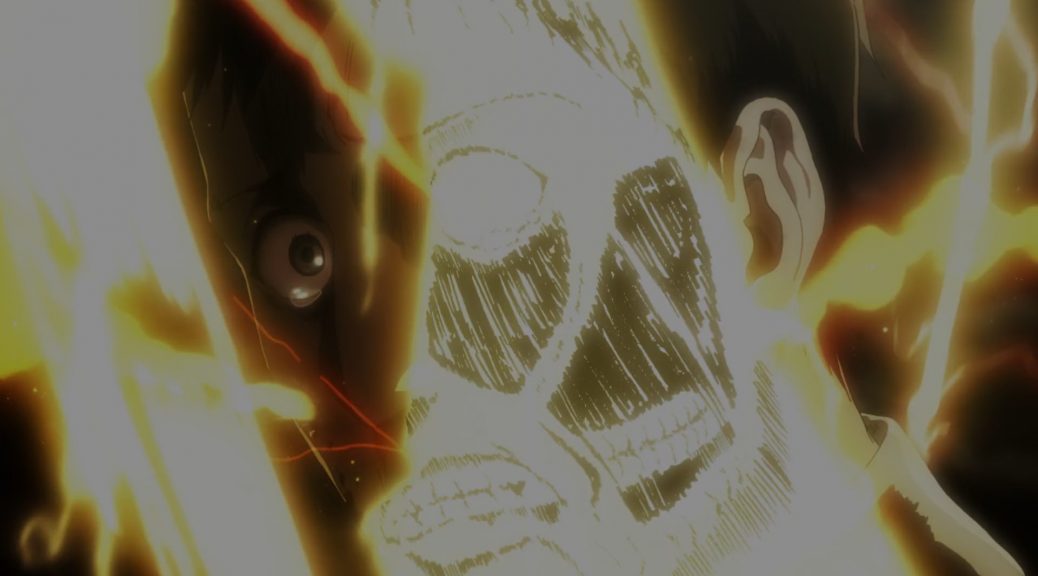 Time for another look at Attack on Titan, as the action takes a bit of a step back and the major narrative twists arrive. Let’s explore how the staff approached those challenges, and how studio WIT’s particular way of doing things is going.

— Takayuki Hirao has been a fan favorite for years. His friendship with Tetsuro Araki is no secret, and thus the appearance of the ex-ufotable ace was something many fans looked forward to. But as much as I would love to talk about him, it doesn’t feel entirely fair; Hirao only co-storyboarded this episode, as he knew he would be busy with #7 which is completely under his control. So while he doesn’t have Hirao’s pedigree, if we’re going to give major props to the direction of this episode to someone it should be to Tetsuya “Star Toy” Wakano, an ex-Wanpack animator who specializes in action and has built a solid relationship with studio WIT. In the grand scheme of things this isn’t one of the most memorable directional efforts, but credit where credit is due!

— I feel like by now we have a very solid grasp of the show’s usage of the makeup animation / special effects for living beings (生類視覚効果). Besides their attempts to make the titans feel tangibly organic, they keep on decorating a handful of key scenes with the human characters; eyes are a recurring target, since they’re a window to the character’s soul and have the potential to lead to captivating shots. The final scene between Historia and Ymir (personally corrected by Ayumi Yamada) is easily their magnum opus, as it’s not just appropriately beautiful but also has the movement some of their previous efforts lacked. Attack on Titan doesn’t have much room for intimate character moments, but they nailed this one and it was in no small part thanks to the makeup animation squad. This team has downsized when compared to Kabaneri – even in the latest episodes it’s still just 3 digital artists – but their drawings are better integrated and simply more effective. For as long as the general quality of the show’s art is maintained, they will get away with these striking detailed shots without creating awkward contrasts.

— The production keeps on being carried by a group of animators constantly reappearing to do important work, which is great as long as it is sustainable. Both this episode and the next one received their fair share of new blood though, this time including animation stars such as Yuuki Igarashi and Satoshi Shigeta. Names aren’t everything however, and I can’t say it was a particularly interesting display of animation – clearly a low-priority episode when it came to movement in particular, to focus on taxing upcoming events. Erika Nishihara animated titan Ymir getting dragged down, but I’m not sure if her work extended as far as Historia’s passionate yelling and Ymir’s questionable idea to tear down the tower, which are my favorite pieces of action this time.

— Considering how important an episode this was, it’s not surprising that it was entrusted to the assistant series director Hiroyuki Tanaka. He had already directed the very first episode of the sequel, but this time he handled the storyboard too. You can trace back his origins to Madhouse as well – quite the recurring theme for this show – and find his first overlap with Tetsuro Araki on Cardcaptor Sakura. Despite working on the same studio for years and debuting as TV anime directors around the same time (Death Note for Araki, Claymore for Tanaka), they actually didn’t work together all that much. But ever since they collaborated on Guilty Crown to form its directional duo, they have been absolutely inseparable. While Tanaka is technically his senior, he has accepted his role as the supportive figure in all of Araki’s modern work.

— If you’re looking for themes in his storyboard, the reflections of those who hide something inside seem like the clear motto this time around. It’s used incessantly, but wide resourcefulness and subtlety are not what people come to this series for. And while it might go overboard, I think those scenes look quite nice. On a similar note, I adored the way impact frames were used to show the true identity of the colossal and armored titans. Since it follows a similar pattern to those reflections I would bet on it being part of Tanaka’s storyboard, rather than a genius idea by the key animator in charge – the regular Toshihiro Kosaka in this case. Either well, a detail that could easily be the smartest trick this series has pulled.

— The nonchalantness of the big reveal has always amused me, and I feel like it translated well into anime. Half-drowned in other dialogue, as part of a casual long shot. I can’t say I find this point of the narrative, where absolutely everyone and everything may turn out to be a titan, all that compelling. That said, there’s something very charming about the way that arguably the biggest twist in the series is delivered.

— You might have noticed that I listed some unusual roles for this episode. The first one is entirely non-standard, to the point the term had never been used before: animation corrections assistance (作画修正協力). Rather self-explanatory by the looks of it, an animation director-style task to help out with the redrawing process. What that exactly entailed we’ll never know, but they were assisted by the veteran Hirotaka Marufuji, who is regularly trusted with chief supervision duties. The other unusual credit is something we’re already acquainted with – the explicit mention of work originally done for the promotional videos. It was Shuhei Yabuta from MADBOX (formerly Shingeki’s 3D director, now its 3DCG Producer) who storyboarded the parts reused in these episodes. Why a CG artist? Because as you might have noticed, the colossal titan is now an unfortunate 3DCG monstrosity. Seeing its new awkward self accompanied by spectacular movement and awkward stills encapsulates this production, the good and the very bad.

— Arifumi Imai will keep on being righteously praised as this franchise’s action star, but Takuma Ebisu has already become the sequel’s hero in the shadow. Since Imai keeps being saved for the particularly important episodes, Ebisu is doing extra work and will end up handling more episodes than anyone else. And his presence is never testimonial, as he makes sure to personally animate the heaviest cuts whenever he supervises the action. I’ll have to keep on raising awareness of his fantastic work!

Really, Takuma Ebisu is the hero we all needed. Thanks for bringing him up. I have a lot of respect for the guy after reading about him in all of these write ups.

It’s such an important scene, and so short, wouldn’t it have been worth the effort to take some extra time and hand draw the colossal titan?

It’s going to have to move, and huge creatures that have to keep a solid form are a bit of a nightmare in motion. If it were just for that short moment, it would have been hand drawn since that’s still much faster than modelling it. Obviously I wish they’d still gone 2D but it wasn’t much of a surprise, if anything the disappointment was how wonky the 3DCG itself looks.

Very dissapointed in the 3DCG animation, I knew from Trailers that the CG will be used very poorly in this season.

I honestly still hope that they redo all these things in a Bluray release, specially for such a huge franchise that Shingeki no Kyojin is.

You mentioned that both Hiroyuki Tanaka and Tetsuro Araki worked on Cardcaptor Sakura. I looked at the AnimeNewsNetwork, and Tanaka was the Episode Director for episodes 59, 65 and 70. But I couldn’t find anything relating Araki to the TV series. What role did he have in the series?

Uncredited production assistant work just as he joined the studio. He then ‘officially’ did it for the movie. Tanaka was quite ahead of him at the time.

傅欣然(Xinran Fu) was credited for some titan falling scenes and a cut of blood splashing on the official weibo(Chinese version of Twitter) account of 震雷.
source: http://weibo.com/5457934601/F1IjKy1HX (in Chinese) where first gif was credited to Meng Sun & second gif to Fu.

Thanks! Really appreciate the info.