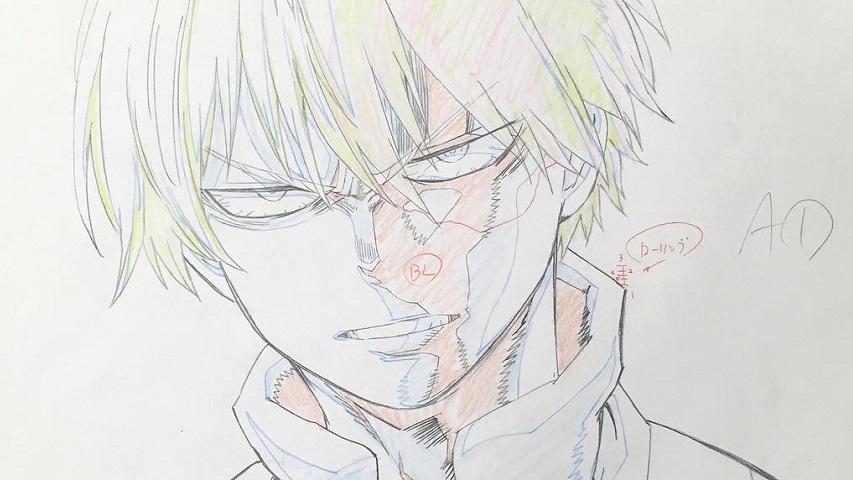 Better late than never! We’re back to cover another two episodes, which to some degree equal the calm before the storm. Even the less intense buildup of HeroAca is a production worth exploring though, so sit tight!

The first outsourced episode of the second season turned out to be much more interesting to talk about than I had initially expected. In charge of the key animation and animation direction was studio Nomad, which previously handled episodes 3 and 8 of the first series. What once used to be a company producing full series such as Rozen Maiden (2004-2006), Sola (2007) and the unfortunate first Yozakura Quartet (2008) has in recent years downscaled to an outsourcing company handling individual episodes for other studios’ productions. They still seem to be capable of producing full series now and then – for example Venus Project: Climax (2015 – 6 episodes) or Chronicles of the Going Home Club (2013 – 12 episodes) – but those are few and far between. Production assistance has by all means become their main role and major source of income these days. Their decay is sad to see, but the animation industry is plagued by stories like this.

Renowed director Seiji Mizushima drew the storyboard for this episode. While most anime fans know him for his adaptation of Fullmetal Alchemist (2003), I’m going to talk about his other hit anime for a moment: Mobile Suit Gundam 00 (2007-2009). This episode of My Hero Academia was a reunion of part of Gundam 00‘s core team – Seiji Mizushima (director), Yousuke Kuroda (scriptwriter) and Kenji Nagasaki (assistant director) – with the difference that it was Nagasaki who was leading Mizushima now. Who would have thought 10 years ago that they would all meet again in an adaptation of a Shounen Jump manga? Mizushima’s storyboard was undoubtedly the best one season 2 had to offer so far. The point of focus was clearly Todoroki’s conversation with Deku, where he reveals bits of his past and motivation; visually stimulating shots like Deku being framed through Todoroki’s fingers are unfortunately a rare sight in this series. Part of it is because of how faithful the anime is to the framing of Kohei Horikoshi’s original manga, which isn’t a tragedy but doesn’t always translate ideally into animation. My favourite shot in the episode was Todoroki slowly lifting his palm, as if he was reaching for his mother, and then covering the scarred part of his face with it. It was an excellent instance of visual storytelling and left me with my mouth wide open. More of this in the future, please!

You might have noticed in the credits that Yoshihiko Umakoshi wasn’t in charge of the chief animation direction alone, as he usually was until now. When the credits surfaced, people started speculating whether he was leaving the series for Hiroshi Nagahama’s The Reflection, which Umakoshi provided character designs for and that is set to start airing in July. Thankfully that doesn’t seem to be the case. The explanation for this anomaly could simply be that the amount of corrections needed for the outsourced episode was higher than usual so he focused on redrawing the hallway scene with Deku and Todoroki, leaving the rest in Takahiro Komori’s reliable hands. Yutaka Nakamura also noted on twitter that Umakoshi’s output is amazing in both quantity and quality, so he really doesn’t seem to be leaving the project. At this point we also know that the following episodes have again been fully in Umakoshi’s care and what’s more, he’s directly supervising episode 23, as noted in the staff preview article!

The second round of the staff rotation properly began with this episode, which brought back the animation directors and episode director of episode 15 to handle the first one-on-one tournament fights. For the first time since episode 12 back in the first season, the storyboarder also got to direct their episode. Nowadays many studios are using a production model where someone draws the storyboard in advance and then a different person is tasked with the direction when the staff is ready to tackle that episode. Big freelance names like Kou Matsuo and Seiji Mizushima simply don’t have the availability required to direct episodes of someone else’s shows when schedules are this tight, and this approach gets around that issue. This model isn’t inherently wrong as episode directors still faithfully follow instructions from storyboards into the finished product, but it’s always nice to see the storyboard artist handle their own episode. After all, nobody knows better what the storyboarder intended than themselves!

The fight between Deku and Shinsou was visually a bit more standard than I would have liked. In a way it was understandable as most of the battle revolved around mind control, but the animation in the final showdown felt a bit stiff. The second season has generally been more generous in this regard, hence the slight disappointment. If I had to praise something, I would give props to the compositing crew for the effects during Deku’s vision of previous One for All users. My reproaches thankfully vanished in the second fight, which was animated by Hidekazu Ebina – an animator who fans of Yu-Gi-Oh! may be familiar with. The cut of Todoroki’s ice approaching Sero stood out for me and was a nice addition compared to the manga counterpart. The adaptation has done a good job at making Todoroki’s power feel intimidating, both in its depiction as an almost unstoppable force and the massive scale of the aftermatches. Just like Ebina on twitter, I also need to highlight Umakoshi’s animation corrections in this scene. He finds opportunities to include dark shadows even when All Might in his hero form isn’t on-screen and it does wonders, as you can see in the intro picture.

In the end, this episode with its somber tone felt like a teaser of bigger things that have yet to come. The final scene in particular was a good audience shocker that sent shivers down my spine, in no small part thanks to Yuki Hayashi’s fantastic soundtrack. Some of the upcoming duels look extremely promising and I’m sure the staff will do their best to not only satisfy the audience, but exceed their expectations!

So, this question has been bothering me for a while now, but is Yousuke Kuroda an actual individual? I know he heads that writer group Orphee, but the amount of work with his name on it is pretty insane. And I have a hard time imagining how a single person is doing all of that work! I thought maybe he, at the very least, got credited for wirting by other members of his enterprise.

Haha, Kuroda is definitely a real human being. And a damn fast writer as you’ve seen.