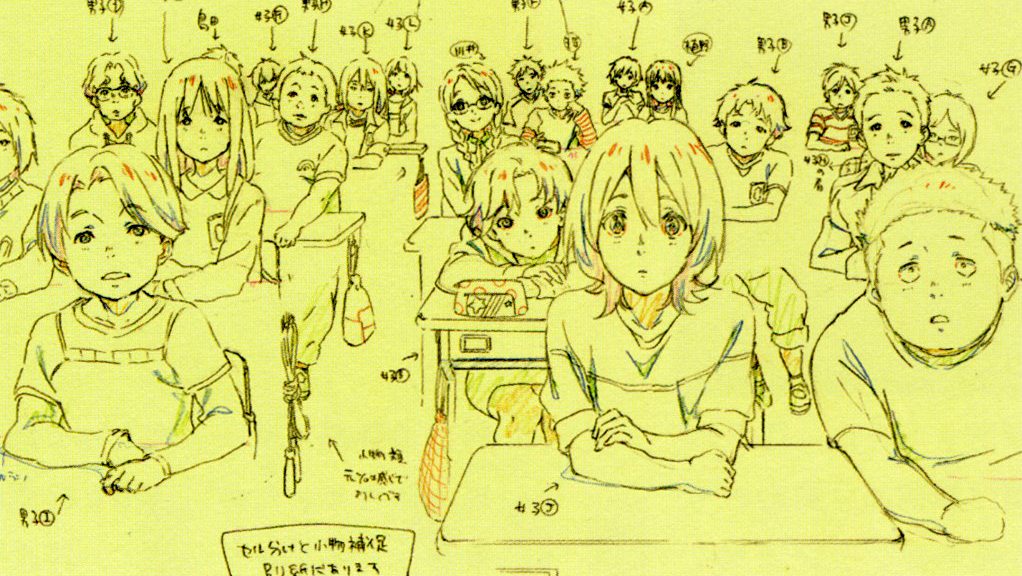 As Koe no Katachi / A Silent Voice finally got released on bluray and was even made available for streaming in the UK, we’ll be bringing you a series of articles about the film. Megax will as usual translate a bunch of staff interviews regarding the production of the film; the first round gathered creators from different departments at Kyoto Animation so all of them could detail their work on the movie and the instructions they received. Let’s start with the 3 animators who supervised all the layouts in Koe no Katachi!

What does a Layout Animation Director do? 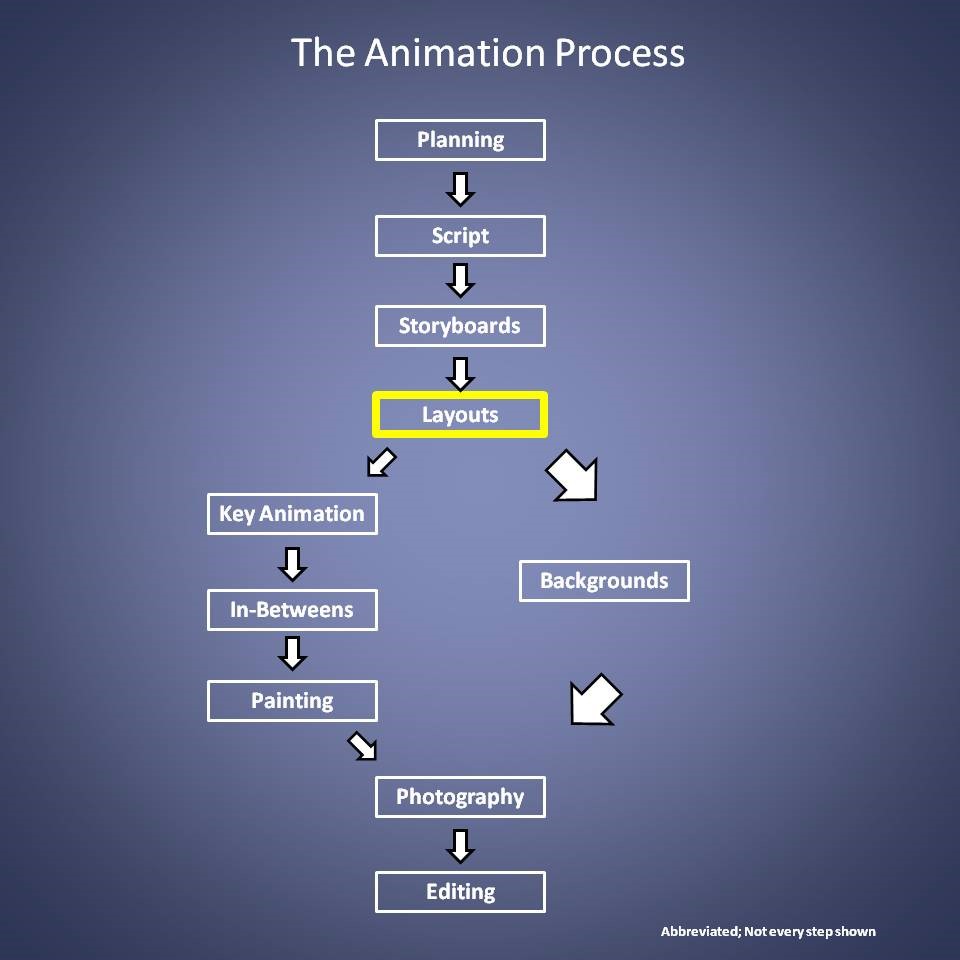 – First, please tell us your thoughts when you saw the storyboards.

Myouken: The scene that left an impact on me was when Yuzuru pushes aside the umbrella Shouya is holding and her face peeks through. The storyboards depicted her hand moving it at such a wonderful angle, I wanted to present that nuance on the big screen. The director’s view of A Silent Voice penetrated through all the storyboards like that, so I wanted to give it my all to ensure everything would be reflected in the visuals.

Maruki: Interspliced between scenes were impressive cuts like close-ups of flowers. As I’d read through the storyboards, I’d feel “ah, I get it” thinking about what the director intended to do with each one. I thought the storyboards communicated very well the world view of A Silent Voice that she wanted to convey.

Kadowaki: My impression of the storyboards was somewhat different. What first impressed me was Shouya in elementary school. It said “he’s a child, but feels cool.” I thought about how best to present him with young features like slim shoulders and legs without making his entire appearance seem childish.

– What did you want to accomplish with the layouts for this film?

Maruki: The director wanted to use a very “alive” presentation. That simply means that we went with a more live-action delivery, so we stopped ourselves from presenting it too much in anime-like fashion.

Kadowaki: I was fixated on making the characters’ posing feel natural and effortless. There were many times the unit directors would check a cut and fix it if it appeared even slightly anime-ish before it arrived to us for an animation direction check. For example, if elementary school Shouko’s legs were pointed inwards a little, then we would fine-tune it to move a little more outwards.

Maruki: That’s right. The unit directors’ corrections would firmly indicate detailed points like how a character’s shoulders are scared stiff.

Kadowaki: The same applied for Shouya’s classmates. I placed them all sitting properly straight up, but then thought “No! This isn’t right!” and fixed them to be more elementary school-like.

Myouken: These are just my personal thoughts, but I believe layouts are similar in nature to real photographs. I thought how best to incorporate my own sense into the animation.

– What impressions did you get from the directors and the chief animation director?

Kadowaki: At the beginning, Shouya is shown in his elementary school days. Director Yamada conveyed a number of things to us in order to give us a good image of how to depict him as a high schooler, but what stood out most amongst those was her statement that he feels like the kind of person who’d be afraid of large dogs and the like.

The image that director Yamada conveyed to us when we first had to depict him as a high schooler, “[Shouya] feels like he’d be afraid of things like large dogs”, left an impression.

Maruki: Besides the instructions from the director, the corrections made by chief animation director Nishiya-san took me by surprise. He clearly wanted nothing but the highest quality drawings for this.

Myouken: Of all the cuts that the director herself checked, the ones that stood out the most for me were Maria’s. You’d always see instruction like “don’t overdo the childishness, she sort of feels like a grandma.” I felt she was awfully obsessed with her.

– This film isn’t a sequel to a TV series. How did it feel starting a movie from scratch?

Maruki: Since it is an adaptation of a famous manga, I felt all kinds of pressure when working on it at first. Once production started, I just resolved myself to give it the best I could. We’ve handled various visual representations of troublesome elements like instruments and water previously, and this time we tackled a new challenge in the form of sign language; so as animators, our ability to represent something has improved. I think our aptitude to portray hands in future works will have leveled up nicely from this.

Kadowaki: Of course I considered the presentation of sign language, but I investigated how to position someone naturally and how best to think up a natural way to view someone one much more during this production.

Myouken: Rather than learning something new, this movie felt more like an opportunity to make use of absolutely everything I’d learned up until this point instead.

– Now that production on the movie has finished, please tell us your thoughts.

Myouken: In order to improve the realism of Shouya’s actions in the scene where he’s flustered as he tries to stop [his mother] Miyako from burning the money, several animation staff members performed how the characters would act. There are so many new things I want to study based off the completed visuals we achieved by handling scenes like that.

Kadowaki: In order to produce good visuals, there were countless retakes and the animation staff gave it their all until the very end. I’m glad I was able to sit beside staff that was constantly re-drawing the same cuts over and over to correct them, and being in the same room as animation directors checking that key animation. I was able to work while feeling the passion everyone had for this work.

Maruki: First, now that the movie is safely completed, I’m relieved that everyone can go see it. Building a movie from scratch isn’t that simple, so I think we had many discoveries that will give rise to things in the future. Though personally, there’s no conscious difference between a TV series and a movie. I work to my limits because I want to make a good work while personally learning from it.

This film is so amazing, glad to see you guys do multiple articles based on it’s production you guys!
This is definitely my favourite film, and its made me even more motivated than before to work my ass off with life drawing and studying Japanese to try and become an animator at KyoAni/AniDo.

Really excited to see more comments from my heroes at the studio. Fingers crossed there’s one for Nishiya-san, I can’t get enough of his work and would LOVE to see interviews where he talks about his work more.

Nishiya has his own, and they even talk about his work and particular lineart in other people’s interviews. You’ll get what you want!

One of the most powerful pieces of cinema I’ve seen in a few years, animated or otherwise. Yamada and all of the insanely gifted people at Kyoto Animation have earned my undying admiration. Also great job publishing all of these materials guys, I’m eating the stuff up!