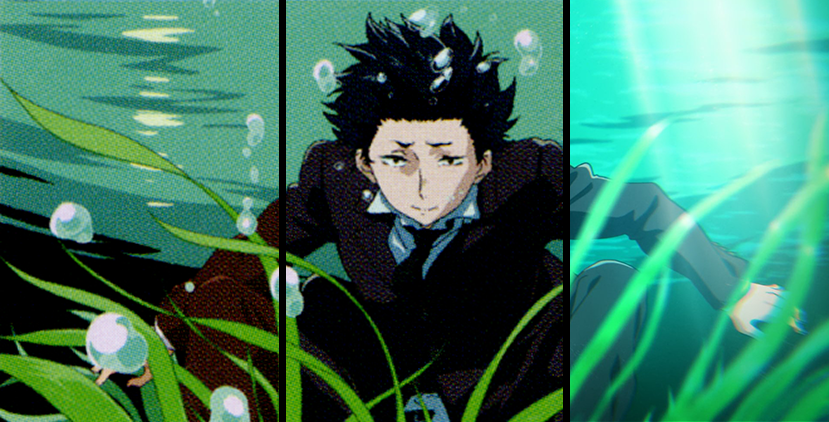 Our journey through Koe no Katachi / A Silent Voice’s production continues, as we reach the movie’s painting staff for another interview. Once again we get to learn about the creator’s approach to this title, focusing in particular on its colors and digital effects.

What do their jobs at the painting department entail?

The section that scans the drawings, colors them and applies the first wave of effects received the very literal name of finishing, as they’re the last ones who deal with the character lineart per se. They receive the in-betweensIn-betweens (動画, douga): Essentially filling the gaps left by the key animators and completing the animation. The genga is traced and fully cleaned up if it hadn't been, then the missing frames are drawn following the notes for timing and spacing., scan them in case they’re still analog, and proceed to paint them; this used to be done by hand in the cel era, but now it’s done with various software. This department is led by the color designerColor Designer (色彩設定/色彩設計, Shikisai Settei/Shikisai Sekkei): The person establishing the show's overall palette. Episodes have their own color coordinator (色指定, Iroshitei) in charge of supervising and supplying painters with the model sheets that particular outing requires, which they might even make themselves if they're tones that weren't already defined by the color designer., who comes up with the general palette for the title. The color coordinator‘s job is to, based on the designer’s vision and under their supervision, come up with the color sheets for particular situations and ensure the painters follow those indications.
Painting isn’t simply filling the blanks however, hence the existence of the special effects crew. They deal with situations where either more nuance or more complex approaches are required – nailing the feeling of translucency, coloring someone’s cheeks properly, that kind of work.

– What is the difference between the roles of “color design” and “color coordinator”?

Miyata: In this case, the general palette for the film and the base colors for the characters were decided by the color designerColor Designer (色彩設定/色彩設計, Shikisai Settei/Shikisai Sekkei): The person establishing the show's overall palette. Episodes have their own color coordinator (色指定, Iroshitei) in charge of supervising and supplying painters with the model sheets that particular outing requires, which they might even make themselves if they're tones that weren't already defined by the color designer. Naomi Ishida-san. Meanwhile, as a color coordinator I had to specifically define the colors for the footage I was responsible for based on her overall design sheets.

– Was there a new method to painting in this work?

Miyata: Ishida-san came up with a new approach for this title in order to better present the feel of the hair. Two types of effects were used; for dark-haired characters, we had highlights where light would reflect off the hair. For characters with brighter hair like Shouko and Kawai on the other hand, we touched it up to deepen the lines and achieve a livelier feeling. We adapted to the situation – we considered each method depending on which would be more effective.

– Were there any other tricks you used for the film?

Miyata: This film’s themes weren’t something I had much experience with, but one thing we did was coming up with many accents besides the base color. For example, tears and sweat are water, so naturally there’s many instances where you would represent those with a colder color. But this time we dared to add some pink to the crying, and a slight green tint to the sweat dripping off Shouya.

Miura: It’s not depending on the cut; when you see the edited video, even more colors keep on changing.

Miyata: In our previous productions we would decide on the general tendency of the palette during meetings and then continue to work as normal. In this case though, we would also check the composited image with the background for each cut and add more minute adjustments. There weren’t many times where we worked cut-by-cut adjusting the color before, from what I recall.

Once something is painted it’s supposed to move to the next step of production, but there are cases where you’ll notice that there’s room for improvement upon seeing it again.

Miura: One request that stood out from the director’s side was to ensure that shadows weren’t pitch black. That’s why we made sure to have a little bit of light mixed into them as well.

Miyata: We actually tried something new with the shadows this time as well. If they’re nothing but a loss of brightness, you end up with a darker film. So rather than simply doing that, we mixed in some new colors like a nice light blue, all for the sake of making them having more of a presence.

– And what about techniques for the film’s special effects?

Miura: Natural expression was our goal for the entirety of this film. For example, we’d normally use a cheek brush liberally if we wanted to portray a character as charming and leave an anime-like feel. This time though, we tried to organically insert it into the skin. The same thing applies to the brushes used for inside the eyes, since we wanted the pupil color to have more faintness to it.

Miyata: Another technique we used to make it feel all the more natural involved making the highlights in the character’s eyes smaller. Normally you’ll see highlights inserted into the eyes to give them a glimmering effect, but we made sure to avoid going down that route this time.

Miura: The highlights would have grown larger if we allowed ourselves to work as we usually do, so we changed our procedure up and deliberately shrunk them.

Miyata: Them being drawn differently this time around meant we had to actively seek out a balance between everything else as well, largely so we could ensure that it all remained consistent throughout the entire film.

Miura: Speaking of eyes, one part of Shouko’s eye color uses the same green as Shouya’s. That was a decision made after the director and color designerColor Designer (色彩設定/色彩設計, Shikisai Settei/Shikisai Sekkei): The person establishing the show's overall palette. Episodes have their own color coordinator (色指定, Iroshitei) in charge of supervising and supplying painters with the model sheets that particular outing requires, which they might even make themselves if they're tones that weren't already defined by the color designer. talked things out and agreed to go with it.

Miyata: The only character who had a different color inserted besides the base color was Shouko.

Miura: That’s right. Shouko was the only one who had a gradation in her eye between two colors.

– Please give us your impressions now that production on the movie has finished.

Miura: Rather than considering it troublesome, I’d earnestly say that I’m glad I got to participate in this film and that it was fun. Being able to work on it was a very moving experience.

Miyata: Since this is such an emotionally charged movie, I was constantly immersed within the production materials, Ishida-san’s color designs and her samples as well, thinking how to best resolve this work. Like Miura-san, I’m very glad I got to be involved with this film.

I may be reading into this a bit much, but is most of KyoAni’s key animation done with tablets these days? Just the way they said “..in case they’re still analog”??

It’s just a disclaimer, they’re still drawing the key animation on paper. Not that they’re not starting to experiment though, I don’t recall the anecdote exactly but think it was Yamada herself who got curious over Kadowaki trying it out.