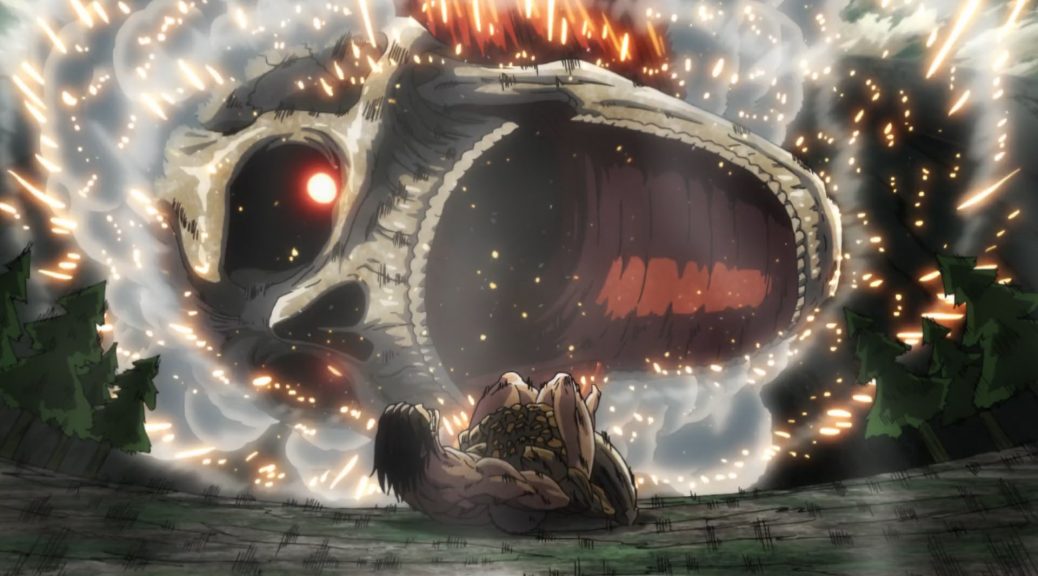 Our Attack on Titan coverage is back to tackle the most spectacular episode of the series yet, which united the show’s strongest creators and some immensely talented guests, as well as the much-needed respite that followed all that. Even during its downtime we got material worth digging into, so get ready for a heavy post!

— As I said last time, Takayuki Hirao could only storyboard part of episode 5 because he had some heavy work coming up. After seeing the result, waiting was well worth it! You might think that such an important episode being in the hands of someone who’s technically an outsider to this production is unusual, but series director Tetsuro Araki trusts him an immense amount. They’ve been acquainted ever since their Madhouse days, and their intimate collaborations have spanned for well over a decade at this point; Futakoi Alternative was Hirao’s first major project, so Araki couldn’t miss it and showed up to draw storyboards under a pseudonym. Similarly, Araki’s directional debut with Death Note featured Hirao’s storyboard on the rather important penultimate episode. This has kept on happening over the years, and it’s likely to become even more common now that Hirao has gone freelance. Araki even used to do key animation work – very unusual for him – on Hirao projects under the name Saburo Mochizuki. That’s how much they trust each other!

— I already brought it up in passing but I feel like this is worth talking about: Takayuki Hirao left ufotable and is now a freelance director. Over the years he had become their ace creator surrounded by inexplicable obscurity. He led fascinating projects like the aforementioned Futakoi Alternative and Manabi Straight before the studio became the massively popular entity it is nowadays, as well as the delightfully charming Magical Sisters Yoyo and Nene movie more recently. I feel like the fifth Kara no Kyoukai film, almost unanimously considered the best one, was his only work that came close to receiving the acknowledgement it deserved beyond people in the know. He was passionate about his last project at the studio, but God Eater turned out to be quite the messy endeavor and he left right after its delayed ending managed to get broadcast. His link with the studio isn’t fully severed because he’s married to an employee, but it seems likely that Hirao wasn’t seeing eye to eye with the people managing the company. It’s a bit sad to see him go, because he was their brightest creator and represented an era of ufotable that is fading away.

— To the surprise of no one, it turns out the 3DCG colossal titan is pretty damn bad. And yet this episode, where it’s been featured the most prominently, is also the instance where it has worked the best. Hirao is both part of the problem and its solution here. The most hectic parts of his storyboard make it less feasible to keep it 2D, as the titan might as well be a robot that requires a solid form and that isn’t easy to maintain in hand drawn motion. But it’s also his ambitious storyboarding that makes the scenes work out of sheer kineticism, plus unusually smart construction. Attack on Titan has always operated under the assumption that people flying around in Spiderman fashion is inherently cool. And, looking at the popularity of the series and its action, they might have been in the right. Hirao gets to amp up that rhythm but also to give it pause when needed, with a control of the tempo of the fights that the series doesn’t usually have. His fondness of insterspliced slow-mo cuts is well-known, so it’s safe to say that he had a blast with this episode.

— The action scenes involving the armored titan have more restrained camerawork – besides Takuma Ebisu’s amazing sequence with Mikasa swinging around – but still exemplify Hirao’s knack at making characters actually occupy space. Characters move away and towards the camera, creating the illusion of three-dimensional space. This fight also embodies something that the mangaka Hajime Isayama has always been very open about, the wrestling inspirations of the series. The 3D Maneuver Gear sequences will always be what fans think about when prompted about the fights in this series, but episodes like this serve as an excellent reminder that there are other action registers the series can pull off.

— Arifumi Imai keeps demonstrating why he’s trusted with these climactic episodes. His animation has the visual charisma to draw attention away from colossal CG monstrosity, and through (rather obvious) corrections alone he elevates everyone else’s work as well. The other top animators involved keep on being influenced by his work as if it were by osmosis, and the bits and pieces he gets to storyboard himself are all thrilling. It’s easy to cynically write off an artist as just an animator, but Imai has by all means defined Attack on Titan’s action.

— Some interesting additions to the lineup of key animators this time. The show’s strongest crew was present of course, but also talented guests like Toshiyuki Sato. Naoki “yotube” Yoshibe seems more comfortable in the indie animation space, but he has shown up to draw FX that differ from his norm a couple times for this series. Itsuki Tsuchigami also restrained his webgen idiosyncrasies a bit while animating a nonetheless excellent scene. Attack on Titan might strike you as a production that fits traditional craft better (besides its obvious reliance on CG environments), but digital artists have been doing a great job with the sequel in particular.

— Takaaki Chiba is the animator in charge of the titan designs, and in this episode that is chockfull of them he was credited for personally supervising their drawings on top of some regular animation direction work. There’s no doubt that this was the most taxing episode yet for the whole crew.

— Ryotaro Makihara is back, though sadly once again without full control over the episode. As I said last time I consider him to be Studio WIT’s most interesting director by far, in no small part thanks to his rich depiction of human behavior. Placing someone like that right after the most resource-demanding episode in the series is a bit cruel for everyone involved. In the end he had neither the room nor the assets to add much acting to the events, but he turned its short brawl into quite the spectacle – just look at how much life his boards imbued it with! The episode actually required the help of people who had already been very busy with the previous one, since Makihara is an exceptional director who has a hard time holding back.

— The intense snack eating scene went viral because it’s genuinely hilarious, and I get the feeling the show is perfectly aware of that. Attack on Titan is a ridiculous show, sometimes seemingly by accident. But the campiness here is entirely intentional, which is why we got this silly eyecatch and official illustration of their past selves eating as well.

— Arifumi Imai’s cuts right at the beginning of the episode are rather amusing, because that was clearly drawn as one big scene alongside the previous week’s ending. Since TV anime kinda requires these weekly cliffhangers, his scene got split up in a rather awkward way. Great work either way, although his beautiful FX drawings in moments like this make me wish he was back in a project where they could get the attractive colors and composite they deserve. And speaking of Imai – his credit as (co-)storyboarder of the PV is on its way its way out, since we’re out of preanimated footage used to tease the series.

— These outrageously thick outlines stood out quite a lot. The first thing they brought to mind was Seraph of the End, so it might be a quirk of this episode’s chief animation director Ayumi Yamada, who was heavily involved with that.

— Keeping the comments on this episode very brief seems like the best option. Not because action-packed moments are the only thing worth talking about. And not because the set-up itself is flawed – as far as I’m concerned, Zetsuen no Tempest peaked with people arguing by a tree after all. No, the issue with the episode wasn’t the static exposition and dialogue for 20 minutes, but how uninspired the execution of that was. There was no tension despite the immensely important implications of some of the information delivered, and the most memorable piece of direction was…making the screen vibrate? This isn’t a big blow for the series as a whole, but this episode in particular was the first instance of barely gets the job done and nothing more.

— This was the first episode without an action animation director, which shouldn’t be much of a surprise to anyone who has seen it. There was nothing for them to supervise, and they’ve earned a bit of a break. Moving on!

In very rare occasions you will find that the English dub is actually good compared to the Japanese cast. I rather avoid disappointments so I just watch everything in Japanese. Season 2 has really lived to my expectations. I remember watching season 1 like “heck when are they going to explain this or do that ffs” and I feel satisfied with how the story evolved. Oddly enough, I have not read the manga, therefore, everything I watched was brand new and generally unexpected. I do like when anime follows the manga storyline but at the same time, I hate being… Read more »

Most of the links seem to be broken here.