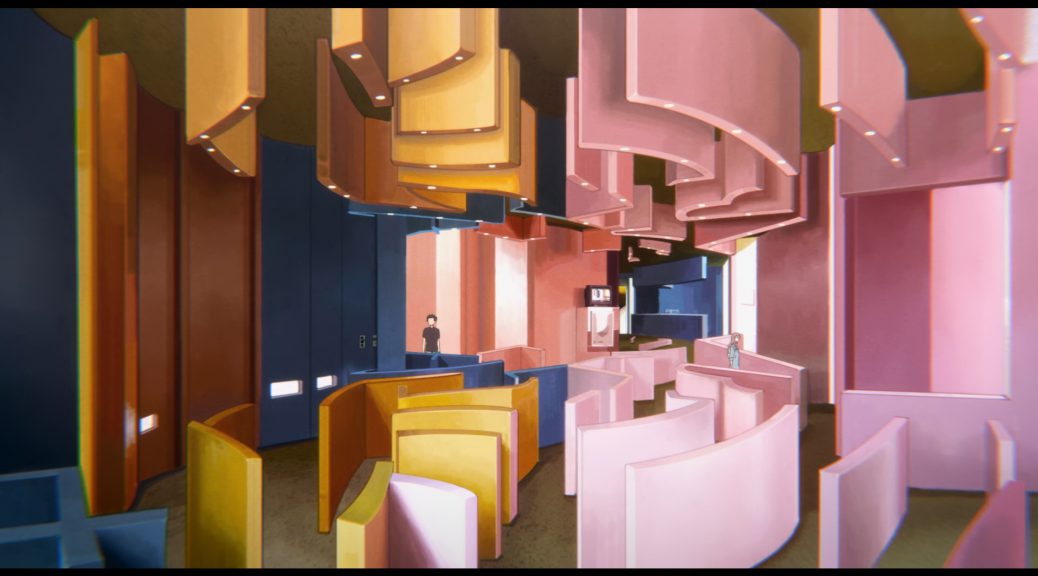 We’re back with Koe no Katachi / A Silent Voice creator interviews, starting a new mini-series that will cover the thoughts of the movie’s main staff. And it couldn’t be any other way, we had to start with the insight of its director Naoko Yamada. This is a fascinating look at her approach to this title! 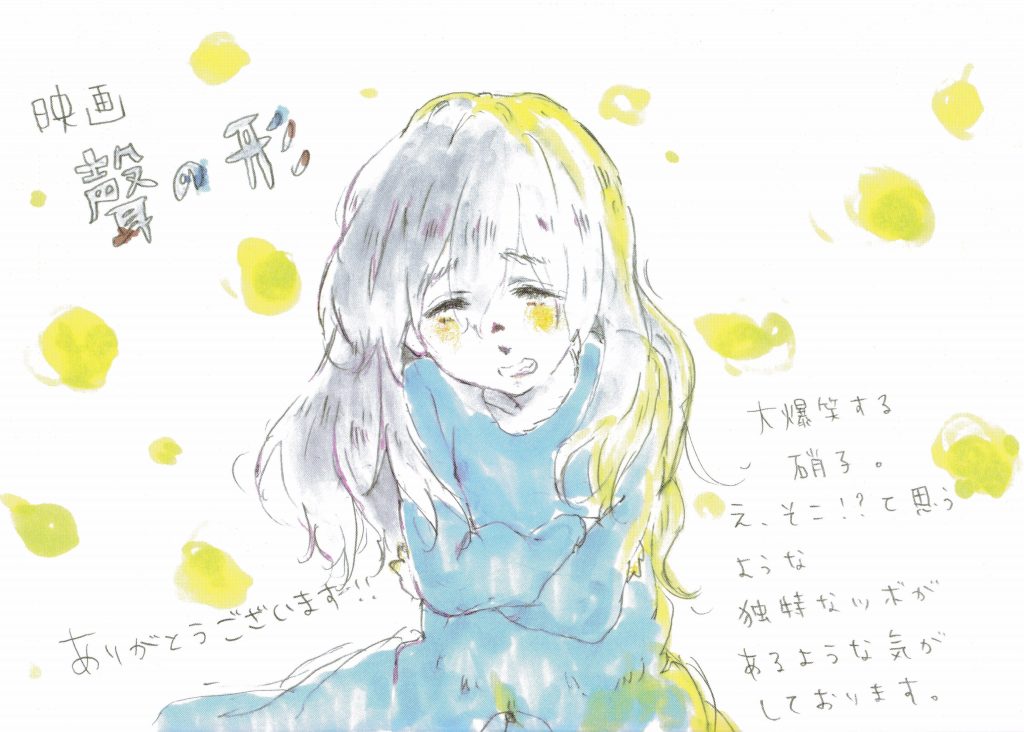 – First, please tell us how did you feel when it was decided that you would direct A Silent Voice.

As soon as I knew that our company would be animating A Silent Voice I felt a desire to direct it, so when I was asked to be the director I was simply ecstatic. When I read through the manga I found its depiction of the connections between people to be extremely charming, which is why I wanted to portray that carefully in the movie. And since this was the first time the studio made a movie from scratch, I could feel an even greater sense of commonality amongst the staff as a whole.

When you work on charming source material, chances are that many people amongst the staff already read it, so we all think about our goals very thoroughly. That’s not to say that we aim to just mimic the original manga though, we truly wanted to make the best movie it could be. But expression in manga and anime works in different ways, so it was important to get across to the staff that surrounded me how to make A Silent Voice convey its original charms through different means.

– While it was important to keep the charm of the original manga, you also had to reorganize it into a single film, right?

If we didn’t rearrange it, then we wouldn’t be able to present the amount of energy and charm the original A Silent Voice manga had. It’d be too much. I thought about how to capture its soul while converting it into audiovisual media. Considering the love and respect I felt towards the manga, if I didn’t first deconstruct the material to actually remake it into a single film, then I couldn’t proudly and honestly say that I adapted it into anime. My resolve towards the work and its author was strong enough that the manga might as well have been the daughter whose hand I was asking for in marriage. I faced the production every day with that level of determination.

– How did you shape the main character Shouya?

Until I had a solid grasp of how to depict him I felt like I was doing something incredibly outrageous, as if I was gathering trash in space. This sketch is something I drew while I was wondering about his portrayal. I felt very tense when drawing that (laughs). The depiction of Shouya felt like a big responsibility, and it took a lot of time to find my personal answer to that issue. I was so immersed in that struggle that I couldn’t see the world around me. I worried and worried, but the days with no progress refused to stop. I’m the kind of person who can’t begin to draw until they see a way out, so while I was working hard on the storyboards, I went to places where I could be inspired. I listened to music, I did all sorts of things in order to find a hint as to what to do.

– You’ve made films before; was this a hardship you had to endure or a new challenge?

It takes time for me to start drawing, but the points I want to focus on and the greatest challenges of the work are clear to me from the start. When I heard about A Silent Voice, I thought it could be a work that integrates its themes alongside the imagery and sounds to create a truly sensorial experience. But while it had to be a title that appeals to your senses like that, the question was how to structure it as a story that also makes it work as a piece of entertainment.

– Speaking of challenges, it feels like another hurdle was the very elaborate depiction of the crowds. Was that an intentional move?

When it came to the background characters, the mangaka Ooima-sensei drew images where people were depicted very humanely in the nooks of the panels. And thus I decided to confront her with the attitude of not wanting to lose. When surrounded by believable crowds, the sense of reality in the film’s world increases, so I felt that was an element we had to focus on. If we hadn’t thoroughly depicted its inhabitants then the depth of this world, its flavor, would be diminished. And since the character designer and chief animation directorChief Animation Director (総作画監督, Sou Sakuga Kantoku): Often an overall credit that tends to be in the hands of the character designer, though as of late messy projects with multiple Chief ADs have increased in number; moreso than the regular animation directors, their job is to ensure the characters look like they're supposed to. Consistency is their goal, which they will enforce as much as they want (and can). Nishiya-san thought along the same lines, eventually we were able to achieve something we were satisfied with.

– The scriptwriter Reiko Yoshida-san mentioned that you saw the film as a story of forgiveness at its core. How did you decide on such a heavy and layered theme?

I thought…this would be a very difficult position to approach positively. When you’re unable to think of yourself positively, that also gets in the way of you understanding what others feel. We all have worries and many things that we feel guilt over, so we might lose the courage to love ourselves. Since I also have that melancholic part of myself, I wanted to make a film that ultimately said “it’ll be okay.”

– When it came to depicting the insides of the characters, how did you maintain that distance between yourself and the cast?

Basically, I viewed them as an observer. There were points where I substituted my own experiences and feelings, but I didn’t insert my real life in the film. When I view characters by themselves, I want to depict what they’re thinking and how they would act. I lend an ear to their feelings and then I want to snuggle close to them without refuting their emotions.

– How did you maintain the concept of Shouya and Shouko sharing similar elements as people living while burdened with a sin?

I applied a concept I saw within the Critical Resemblance House in Yoro Park, which appears in the second half of the film, to their relationship. There’s a term in math called a “limit” used to describe values that are not equal but are similar as they approach infinity. I thought about using that as a foothold to approach Shouya and Shouko. When you’re creating something, you always get entangled with all sorts of concepts and points; in my case, there have been many times where I’ve drawn inspiration from math and physics concepts.

– How did you progress through working on the storyboards?

Since I couldn’t draw until I had a clear vision representing the colors, lighting, and how it all would be portrayed, I progressed bit-by-bit through the storyboards drawing scenes here and there. It feels like I enclosed around the axis of the work with various textures.

– Incidentally, didn’t you draw a lot of sketches?

There were several times where I would draw sketches immediately on storyboardStoryboard (絵コンテ, ekonte): The blueprints of animation. A series of usually simple drawings serving as anime's visual script, drawn on special sheets with fields for the animation cut number, notes for the staff and the matching lines of dialogue. More sheets, or rough/mini storyboards as other directors would say, then trace them for the proper storyboards. The reason why is pretty personal…once I’m pleased with a drawing on whatever format, I don’t have the courage to draw it again from scratch. (laughs) Perhaps I draw those sketches separately so I can reorganize what I draw on the actual sheets later. That doesn’t mean it’s a tidy process where I draw everything as it is in my head, though. Once I’ve drawn a bunch on the sheets, I’ll use a cutter and cellophane tape to fix everything I wanted to switch in such an analog way. That’s why my storyboards look patched together if you look from behind. If I think of a cut I want to include later, then I go back and rearrange it all to insert that. It always feels like I’m fighting myself when working. But even though it feels like a pain, that won’t stop me from doing it! (laughs) Conversely, if I end up thinking something is useless, then I’ll start cutting until I’m pleased. It’s important for me to keep a good balance of subjectivity and objectivity while working. 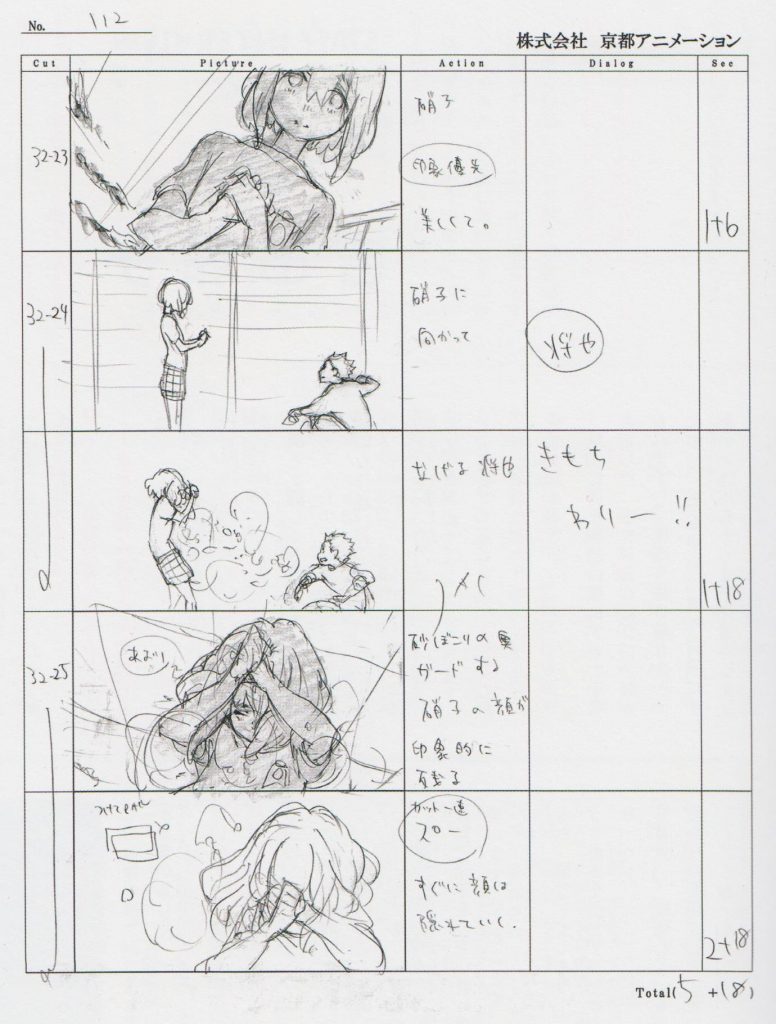 – Now that work has finished on the film, please tell us your thoughts on it.

A Silent Voice was a work that made me take various approaches to depict the indispensable element of sound. By interweaving its rich themes with visuals and sound I noticed new challenges that pushed me forward. I thought that tackling those would be nice.

Source: Koe no Katachi Making Book, which is sadly no longer officially available.

It’s always a joy to read an interview with Yamada. she’s the only creator out there who I feel speaks for me, our ways of making, our attitudes to making, our issues with conveying with words, etc. are so so similar. She is such an inspiration to me, so interesting about how she just used here sketches as her storyboard instead of making them up on the go/redrawing them.

Completely off topic, but it’s fun to read their notes on the storyboards. Also, I’ve noticed that Yamada likes to write her boxes (in Kanji) as circles–idk if that’s a JP calligraphy thing

That’s an amusing remark since Yamada leans towards roundness as an artist in general. I hadn’t considered how it leaks into her handwriting as well!

I actually noticed this earlier on the chalkboard writing in Eupho2 finale. I made an offhand remark on twitter and a friendly JP account informed me that “丸く書いた方がかわいいのです”. So I guess that’s a thing among JP speakers?