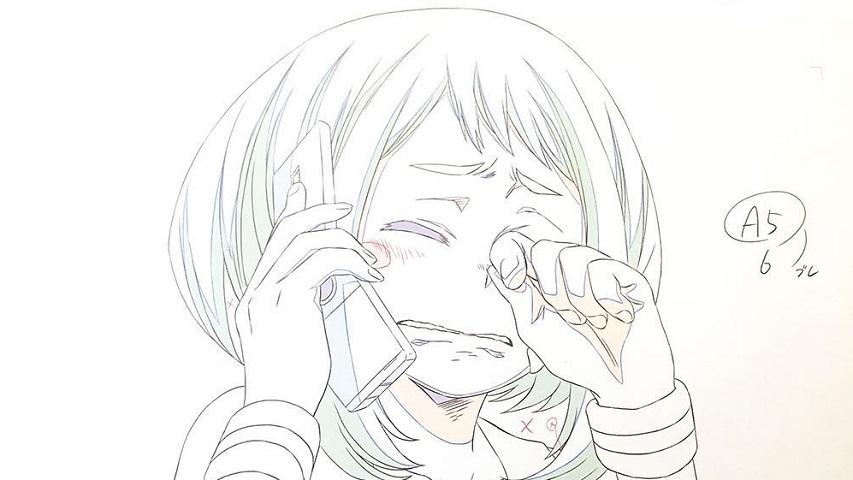 Once again we’re ready to explore the production of HeroAca and the artists who make this intense and emotional series all the more effective. But this time we’re also going a bit further, taking a slight off-topic tangent to observe the inner workings of TV animation management.

Continuing with the regular staff rotation, storyboard artist Kou Matsuo and animation directors Kazumi Inadome and Yoshiyuki Ito returned after episode 17 (season 2 #04). I’d like take this opportunity to talk a bit about HeroAca’s production model, highlighting an incredibly important role that is usually ignored. Production assistant should be a familiar role to those of you who watched Shirobako, since that’s what Miyamori was doing during its first half. Ensuring all materials for one episode actually get done and are delivered where they should be is no joke! HeroAca currently has four in-house production assistants, each of them essentially in charge of one episode per staff rotation. I’ve compiled a list of the PAs and how they correlate to the creative staff.

This table should help you visualize HeroAca’s production cycle. As you can see, Yuji Maruyama has managed episodes with Kodaira and Murai supervising the animation, while Masayo Kushida has been in charge of the ones in Inadome and Ito’s hands. These two teams seem to be carved in stone and likely be maintained throughout the show. The distribution of staff in Masayuki Gunji and Aiko Yamaguchi’s cases isn’t that clear. While each of them works with a specific episode director, their episodes always rely on different teams of animators. I don’t know the exact reason, but it’s something worth highlighting if we’re peeking this deep into the production. But either way, these trends are established due to the ways the studio operates and can be broken according to the needs of the project; Yoshihiko Umakoshi will personally step in for episode 23 alongside Dogawa and Gunji, and his irregular presence will probably upset the balance and cause some of the teams to reorganize for the following episodes. I feel like Takahiro Komori will choose to focus on assisting with chief animation direction duties, while Tsunemori Saito might be busy helping out multiple supervisors in each rotation. I know this is dense minutia, but hopefully it shed some light on the inner workings of the production!

But now let’s return to the episode itself, since fans are understandably more invested in the tangible side of anime production. Yoshiyuki Ito was in charge of animation direction for its first half. The drawings there looked generally sharper than in the second half, and there were a few bits where his personal style was in full display; this short cut of Iida running towards the camera in particular looked like it came straight out of Concrete Revolutio or Star Driver. Ito was also credited for key animation, so it’s possible he directly animated this part by himself. On the other hand, the second half corrected by Kazumi Inadome had softer and more delicate feel. Some of the drawings were reminiscent of her magazine illustration, making her work easy to spot.

Some interesting names popped up in the list of key animators. Kaminari’s fight against Ibara was handled by Katsuya Shigehara. He’s an animator with directional experience under his sleeve, as you may remember from my coverage of Mob Psycho 100 where he directed episode 3 and 10 and co-storyboarded episode 8. Mina’s skating sequence while she evaded Aoyama’s beams stood out as the most impressive piece of animation in this episode. A tiny part of it was animated by the famous Hironori Tanaka, who was likely brought onboard by the episode director Satoshi Takafuji, with whom he worked on HeroAca‘s JumpFesta OVA. Kirishima and Tetsutetsu’s fight, or perhaps the birth of their friendship, was animated by twitter user Karaquri_H04, whose real name I haven’t been able to figure out. Amusing quirks of the industry in 2017!

As a quick final note: some of you may be asking what Snowdrop is and why are two animators credited under it in the credits. They’re an outsourcing company which happens to be on particularly good terms with studio BONES and P.A. Works. Their work is rather decent so I’m personally hoping to see a full subcontracted episode handled by them, instead of the current outsourcing studio Nomad. Given BONES sub-studio C’s history, it’s a fairly possible outcome.

When I say that this episode was painful to watch at some points I don’t mean it as a complain about the production or otherwise, but rather as a comment on how effective it was. Episode 16’s duo of Shinji Ishihira and Hitomi Ezoe returned for what I would consider the first truly intense fight of the tournament, and definitely the most emotionally charged one yet. Uraraka’s noble loss was treated with respect, though the situation as a whole obviously isn’t ideal; even those who don’t follow production matters closely might have realized how unlucky this episode was by preceding the Deku vs Todoroki fight, which clearly got a higher priority within the production and ate up an immense amount of resources.

Takahiro Komori served as chief animation direction for the first half of the episode. He seems to have grown more comfortable drawing Yoshihiko Umakoshi’s designs compared to his previous outing on episode 19. The comparison might not be fair as that was an outsourced one though, so chances are that this time he was working on higher quality drawings to begin with, and thus had more room to refine them. He even managed to sneak in a couple of shots inspired by Umakoshi’s trademark drawing style, which was a nice gesture. Meanwhile, Umakoshi himself only corrected the less demanding second half of the episode. Don’t get me wrong though, the fact that he corrected any of it at all is impressive considering his outrageous workload! If you’re curious about their approaches, I believe that the biggest difference between Komori and Umakoshi is ultimately in how they draw Bakugo. A picture definitely is worth a thousand words – just compare the hair!

Unfortunately, the animation itself wasn’t as impressive as I would have hoped. It supervisor Takashi Mitani (who key animated the outstanding Iida attack from episode 5) focused on the effects first and foremost; explosions, smoke, and the likes are his speciality to begin with, so you can sense his hand all over this episode’s FX. His skill in that regard kind of makes up for how static the cuts themselves are, though it’s obvious that it could have fared better if the staff didn’t have to worry about prioritizing certain episodes. This confrontation is conceptually more positional than high in motion, and Bakugo’s attack still have a good sense of impact, but in the end it was a bit of an awkward rendition of the manga.

The credits were mostly populated by regular animators from the show, joined by guests,  like the mother-daughter duo of Misao and Ayumi Abe and part of the crew from the Bones Animation Department. Digital animator Yuka Shibata (not to be confused with the ex-Gainax/ufotable artist Yuka Shibata) was in charge of Ochako’s touching phone call with her dad. You can see one of her drawings as this post’s intro picture, courtesy of HeroAca’s official instagram account which posts key frames on a regular basis. If you’re curious about these lower profile creators who nonetheless make the show possible, HeroAca’s regular animator Minami Sakura recently joined twitter, so that’s your chance to follow her!

That’s all for now, but you can expect next post to be out fairly soon. After all, episode 23 will be special!