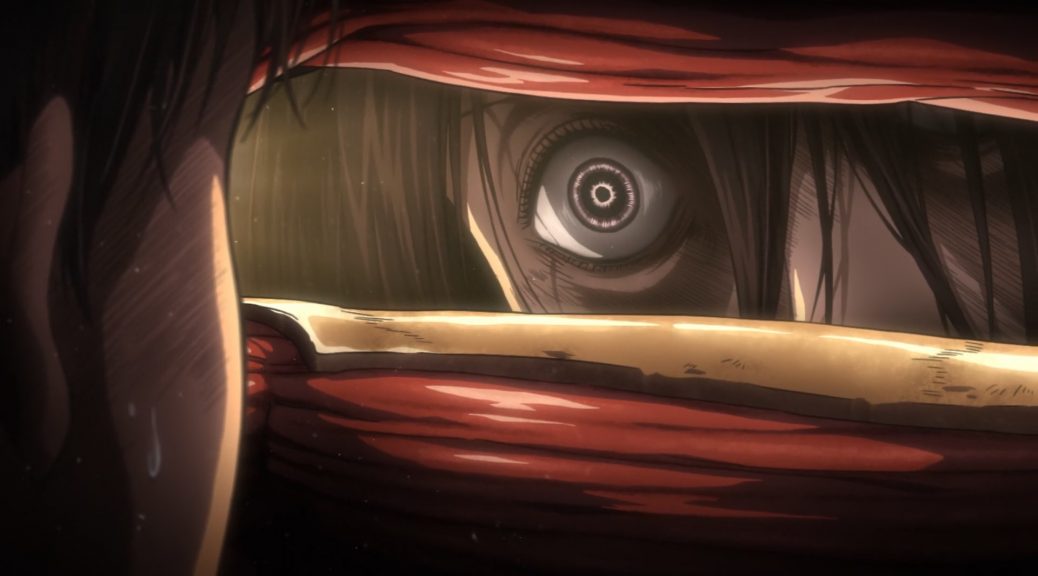 Production fatigue and WIT’s always questionable management become more of an issue as we approach the end, but this series keeps on finding talented people to make up for that. Ghibli veterans, the show’s own stars and promising new talent all in one post!

— If I were to call this the Ghibli episode of Attack on Titan it would only be a bit of an exaggeration. Kenji Imura, whom I already briefly talked about when discussing the effect of Ghibli’s sort-of-death on Your Name and the industry as a whole, returned to helm another episode. But more importantly, we saw this season’s first storyboard by Masayuki☆Miyaji (with a star in there by his own choice). His past at Ghibli is obviously further away, but not any less relevant; he joined the studio after his successful experience in one of their training programs, then went on to become an assistant director on projects as massive as Spirited Away. Besides the enduring aesthetic influence, starting off at Ghibli left a massive imprint on his fundamental approach to anime production. Miyaji thinks big, as seen on his series directional debut Xam’d; its first episodes in particular portrayed a world so densely–packed that it had no business being a TV production. He gained a reputation of being impossibly demanding even within an animation powerhouse like studio BONES, which might explain why ever since then he’s only been able to direct another project – the film Fusé: Memoirs of a Huntress. There are few creators as ambitious as him in this industry.

— This episode represents a more restrained side of Miyaji, but a very competent one nonetheless. He’s been drawing storyboards as a freelancer fairly regularly, and while those don’t offer the theatrical experience he aims at as a project leader, they’re still well above average. I don’t think his boards are the most effective ones in this show, but they possess an evocative beauty that puts the rest of Attack on Titan to shame. Ymir’s past in particular was some of the most striking work I’ve seen on this series.

— Yet another Takayuki Hirao storyboard, a higher output than anyone could have expected. It’s possible that leaving ufotable is the factor that allowed him to put more work in here, which makes me wonder about his future. He’s doing an excellent job assisting Araki, but if he were to join WIT for real I’d like for him to get his own projects. That said, yet another stellar job by him. The flower motif that takes us on a journey ending with familiar compositions is beautiful, but I find an episode like this fundamentally challenging: he had to take a bunch of people piggybacking on a giant naked Ironman and make it feel like an exciting battlefield. And that he did, as if it were easy!

— The make-up animation crew also keeps hitting it out of the park, and might very well be the best addition to this series in the sequel. Mikasa could have never been this terrifying in the first season.

— And following up what I said before, Ymir and Krista’s relationship is still the most compelling narrative thread by far. She is literally her light is my kind of cheesy goodness.

— Let’s tackle the obvious problem, though: the production is becoming an immense mess. Hirao comes up with layered battlefields with many things happening at the same time, but the show can barely ever depict that when it turns into a ridiculous slideshow. Some stills do serve as purpose as they edit complex, long actions into impactful shots, but the show is reaching painful levels where it’s hard to maintain any tension or sense of dynamism. The polish in general is long gone, so we get awkward cutouts, sliding CG horses and hand drawn ones that look amusingly dorky – Araki said that he believes his staff draws the best horses in the industry at this point, but not even that can solve the current mess! Having 22 animation direction roles for one episode should tell you all you need to know; Attack on Titan is willing to sacrifice motion, but they always to at least preserve a superficial feeling of having good art, and that means employing obscene numbers of supervisors when things go wrong.

— Since the very beginning of this coverage I’ve mentioned that I kept seeing people credited on this series that I would have assumed would be working on The Ancient Magus’ Bride…and as it turns out, I might have been more correct than I realized. The announcement that they’re going to prescreen its first three episodes in a few weeks means that the studio is already deep into its production, so some people might have been very busy juggling both works. MahoYome is a big deal for I.G Port as a whole, which means you shouldn’t blame them for giving it preferential treatment. Instead keep in mind that things would have been much worse if this show had run for two straight cours again. No matter how much you like Attack on Titan, please understand that its shorter runtime has been a blessing.

— The incredibly long list of animation directors is sad but also interesting. The veteran Hirotaka Marufuji, who had done some miscellaneous supervising work, is now a full-on animation director alongside…well, everyone who is within WIT and still breathes. Even the young effects master Kazunori Ozawa got to supervise a chunk of the episode, despite key animation being his personal focus. This is full-on panic mode.

— Let’s finish with a brighter topic! I’ve been neglecting to talk about the interesting figure of Yumi Kawai, so allow me to do so before the show wraps up. Anime fans have become a bit more familiar with the GEIDAI Animation program from the Tokyo University of the Arts thanks to Mob Psycho 100’s popularity; its immensely charismatic paint-on-glass sequences were animated by its alumnus Miyo Sato after all. Another personal GEIDAI favorite of mine is the indie star Wataru Uekusa, who has also started to do some work within commercial anime as well. When compared to those, Kawai’s name still remains very obscure. Her adventures in the industry started when she joined WIT to act as production assistant around 2014. Since that is a direct path towards becoming a director that’s all she did for a while, though her background as an artist also allowed her to do some animation work in here and there – she provided some for this episode for starters. The second season of Seraph of the End gave her a chance her to co-direct an episode for the first time, but it wasn’t until episode 8 of this series that she got her first solo directional opportunity, with a storyboard by WIT’s brilliant Ryotaro Makihara to boot. Kawai, who has acted as assistant episode director for this whole season as part of her training, is definitely shaping up to be a creator worth paying attention to. She has repeatedly talked about Seiichi Hayashi’s silent animated piece Ki Renka (1971) as the work that impacted her the most. She was blown away by its ability to make her perceive sounds that didn’t exist, and be immersed by crudely depicted actions. Her dream is now to create something that could have as much of an effect with a much wider set of tools; the attempts to make something with a visceral impact are clear in her GEIDAI works, especially in Over Her Curtain. Here’s hoping that her career keeps on advancing and she’s allowed to storyboard something next time.

It’s sad, while I get most shows tend to have multiple animation directors an episode, I don’t think many have ever reached AoT levels. And that’s sad for a sequel released 4 years after the first season.

Also that horse is just like “Whatever” in that clip. The fact that they call that “good” is even more laughable. Wondering how much of this will be updated for home video.

“Miyaji owns, when is his next show, please,” indeed.

Have to agree when you mentioned Takayuki Hirao doing an excellent job assisting Araki. It’s disappointing that the early points of the Attack On Titan manga look horrible, I personally prefer the anime, anyone else agree? Anyways keep up the great work I enjoyed this post.