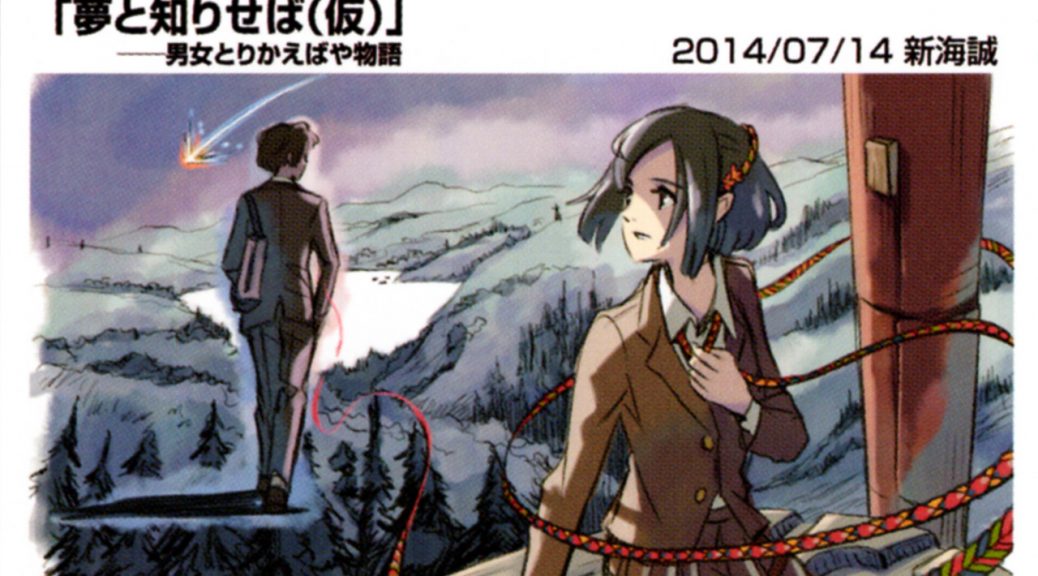 Welcome to megax‘s new mini-feature “The Pre-Production of Anime”, where we’ll detail how a production goes from a mere idea to the point where the animation process starts. Much has been written about the actual creative endeavors (including drawing, painting, background art, compositing), but there’s nearly no guides out there talking about what happens beforehand. To address that, we’ll go over every pre-production step to give you a better idea of how an anime is born.

Planning is the most vague and broad period of the pre-production process; it covers everything from the initial idea to produce an animated work to the beginning of the scripting stage, and doesn’t necessarily follow well-defined patterns every time. However, everything starts with the same beginning: someone thinks “I want to make an anime of (idea).” More often than not, that person tends to be a producer at a company.

Producers are generally the people at the core of projects. It’s not as if they are individually soulless monsters, but they’re by all means more businessmen than creators – in fact, many artists have moved to such roles after growing older and deciding to quit active creation. They organize work and ensure that progress is being made on their respective fronts, and the inventiveness they need isn’t the same creators require. One great example of a producer coming up with concepts for a show is Madoka Magica. Aniplex’s executive producer Atsuhiro Iwakami simply thought “I’d like to see a magical girl show supervised by the director Akiyuki Shinbo” since Iwakami had worked with Shinbo (and more precisely, the staff he mentors at SHAFT) on Hidamari Sketch and Bakemonogatari. Iwakami had also read the Fate/Zero novels written by Gen Urobuchi and thought his style would suit the franchise, thus he brought him on board. Along with original designer Ume Aoki (who obviously also worked with them on Hidamari Sketch), Urobuchi and Shinbo formed the “Magical Quartet” with Studio SHAFT to be the author of Madoka. Iwakami’s idea and his connections were all it took to create a huge multimedia franchise.

These ideas are not solely limited to specific people either. Concepts, whether original or not, are often shopped around to various people before they’re taken up by the staff that will work on it. One good example of this is “Ninja Slayer.” Everyone now associates it with Studio Trigger, but it was actually offered to studio Sunrise as a potential project first before being rejected. Chances are that it would have been an entirely different series if the first deal had worked out! Similarly, there’s popular franchises where lots of companies bid to be involved in the production of a show. Once Dengeki Bunko (an imprint of Ascii Media Works, now part of Kadokawa) began shopping around Sword Art Online and Accel World, they had multiple companies bid to be involved and/or lead production on it. They trusted Genco, a company they had worked with previously on Toradora and Ookami-san and Her Seven Companions to lead those two productions. Genco then chose Warner Brothers, Bandai Namco Games, and Sunrise for Accel World, and Aniplex/Bandai Namco Games for Sword Art Online. That allowed for multiple collaborations between the two works due to the shared links between the projects.

One question you might be wondering is whether there is a big difference between planning original anime and adaptations. Pony Canyon’s producer Tatsuya Ishiguro commented that original anime series need to have two big names in the three creative pillars of a series: director, series composer, and/or character designer. If there isn’t enough namepower, then trying to fund an original series becomes quite difficult. That’s one reason why a lot of original projects ask Mari Okada to serve as series composer, even if she didn’t come up with the original idea; they need the attention her name garners in order to sell it to potential investors. This is the same reason why many series approach popular illustrations to serve as original character designers, even when the animation designs in the end have barely any trace of their style – the name of a popular artist doesn’t only attract viewers, it convinces businessmen that it’s something worth pursuing to begin with. Such a cynical industry! When it comes to adaptations though, that’s usually less of a factor as the source material’s popularity is deemed enough for the investors to judge the potential of the title and their chances of success.

Once a producer has an idea and gets their company’s executives to agree to fund it, they begin the groundwork to try and get other companies to help finance it. To do this, they create a production proposal detailing a general plot (liable to change), characters, and general theme of the story along with concept designs/images of the series and show it to producers at other companies in order to form a production committee. A production committee is a short-term company that exists to create a work (TV show, film, etc) using the expertise of each of their parent companies. I’ve written much more about them already, but usually, you’ll see a video publisher, music publisher, print publisher, merchandise creator, and someone holding international rights for the show. Animation studios can be on the committee and can even lead the committee as in the above example, but very few are willing to (or even can) take the financial risk of funding most of a production. Most often, you’ll see them near the bottom of a list, indicative that they’ve not invested much money in production and thus won’t receive much in return.

After the committee has been assembled, they then start to assemble the complete main staff list. This entails finding a director that has time to work on the project in case they hadn’t contacted one already, someone to outline how the series will be split episode-by-episode and oversee scripts, an artist to design the characters and serve as chief animation director(s), and which place can manage the actual animation production. Sometimes the animation director can be recommended by the director, though the committee and/or animation producer suggesting names is just about as common. Later on, these key staff connections will fill out other things like roles designer, art directorArt Director (美術監督, bijutsu kantoku): The person in charge of the background art for the series. They draw many artboards that once approved by the series director serve as reference for the backgrounds throughout the series. Coordination within the art department is a must – setting and color designers must work together to craft a coherent world., color designerColor Designer (色彩設定/色彩設計, Shikisai Settei/Shikisai Sekkei): The person establishing the show's overall palette. Episodes have their own color coordinator (色指定, Iroshitei) in charge of supervising and supplying painters with the model sheets that particular outing requires, which they might even make themselves if they're tones that weren't already defined by the color designer., and storyboarders/episode directors.

As the committee works on that, they also begin work on planning how the series will go. If it’s an adaptation of an existing work, how much will the series cover? How many episodes will they finance, and then how are they going to be divided for home video release? What additional revenue sources will they aim towards – preview screenings, live events, limited merchandise? When will they be able to make all of these? When will they be able to broadcast the production? All of these are details hammered out by the producers and the production committee members. You might think this is very disconnected from the actual creative process, and to some degree that’s true, but poor decisions in these matters can ruin the work of fascinating artists from the get-go. No matter how talented your staff is, if the executives decide a show should air too soon (perhaps due to beneficial cross-media timing, or simply impatience) then the project will fall apart. If they enforce the director and series composer to adapt an unrealistic amount of material, you’ll end up with a series that is either too rushed or that slow downs to a crawl. These are not hypothetical, we’re talking about recurring issues.

Once the finer details relating to the show are done like episode count and general content, then the director and series composer begin to write how the series will go. That’s often called a “readthrough”, but we’ll get into that process next time! Look forward to it!

Thank you very much for this article. It’s a part of the creation of an anime that is often overlook and finding information on it can be really tedious. This is really enlightening, especially on the importance of the producers role and implication in the show. I’m waiting eagerly for the next article =3.

The next one goes more into detail about what you’re curious about (producers’ role for story details). I’ve had to go through a lot of various interviews and such to find out who wanted what as each time it’s different. Please look forward to it next week! Also, a good friend of the blog, karice, will be writing a much more in-depth look at scriptwriting that will come out around the same time. We’ve been in touch since these topics go together so much. Mine will be a bit of a primer as I tend to prefer introductory/educational pieces instead… Read more »

Well, I’ve just finished my post for this week too, and I hope it does answer some of the questions you have, Audrey!

It all depends on contracts and how things are done for each individual project. If a print publisher is on the committee, then they’ll give some of the returns to the other companies, but we won’t know the percentage or if they had to give any at all. That’s in private documents for each individual production. We can note trends, but we can’t say “boosting the source material will give this a second season.”

Honoured that you gave me such an earlier preview of this series of posts so that I could start putting mine together, megax. And glad that we’re finally starting on them! I’m a bit late to this discussion now, as has been the norm for me this past half a year, but better late than never, I hope! I still wish I’d thought of this earlier, but there was one more point that would have fit best in this initial post: even if producers manage to organise a (proto) production committee, that doesn’t necessarily mean that the project will come… Read more »

Hi this is very very helpful!
I am wondering, how much time passes from the moment an anime project begin pre-production to when an anime is either announced or when it actually airs?

I know this can probably vary alot but is there some estimate?
Take for example, a 12-13 episode series adapted from a manga or LN

Is this just one article or you have complete series. Please let me know I want to learn it. After reading the article, I can trust you.