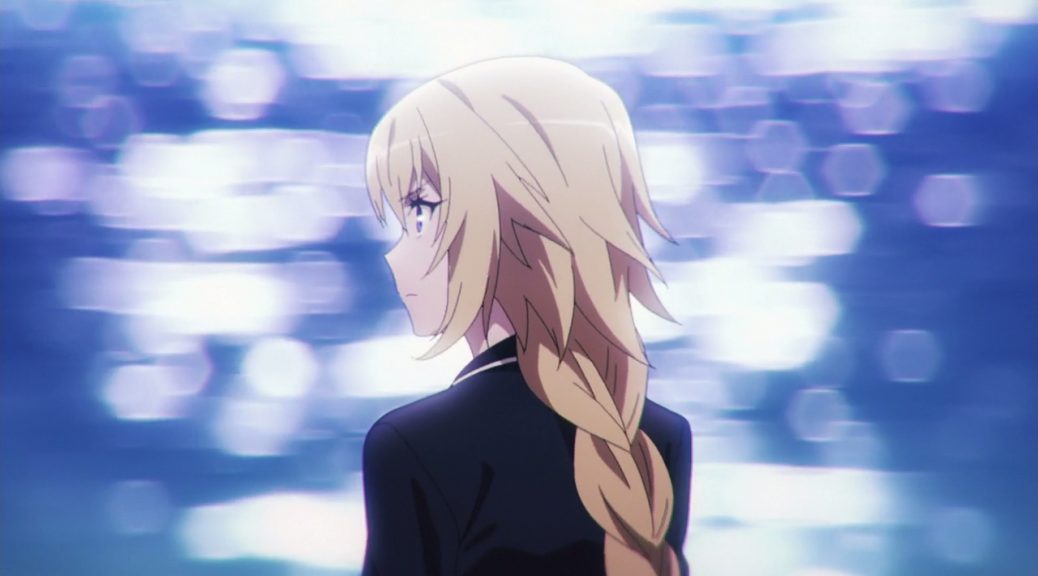 We’re still pacing our way through the show’s introduction, judging by how most of this episode was setup for things to come. That doesn’t mean there’s nothing to talk about, however! The state of the production itself is becoming increasingly clear, not to mention the appearance of a surprise star!

— Another low-key episode, barring the brief clash between Karna and Siegfried. Let’s use this as an opportunity for some insight into the production as a whole. Character designer Yukei UK Yamada isn’t credited as chief animation director for the entire series as one might have expected. In fact, he even mentioned that he won’t touch the next few episodes on Twitter before promptly deleting the tweet. This isn’t too unusual, considering we’ve seen the likes of Yoshimichi Kameda opt to turn down the position altogether, in favour of directly supervising specific episodes on their respective shows (Mob Psycho 100 in his particular case). There seems to be a more immediate concern in relation to this decision here, though – the project’s questionable schedule. Sub-character designer Tomoko Sudo stepping in for the position this week, not to mention three assistant animation directors coming in for a quiet episode, feels like a clear sign that it’s less a case of artistic intent and more of an attempt to keep the production afloat; since having a single person as chief animation director for a project with rushed drawings creates a bottleneck, many modern disasters choose to employ many of them. If Apocrypha manages to maintain a somehow regular rotation with only two of them it’ll be well within normality, but for a while all signs about the production have been a bit worrying. Judging by what we’ve seen so far, I would assume that Sudo will handle episode 4 as well before passing the baton to someone else for a few episodes. We’ll see.

— Tatsuya Yoshihara’s involvement in this episode came as a very pleasant surprise. I would have assumed that the recently appointed director of Black Clover would have his hands full over there, but a pact between brothers made back in May made him come to action director Takahito Sakazume’s aid. A deal that was sealed by Yoshihara simply saying “Sure. :)” in response to Sakazume’s request, but that’s all you need between dear acquaintances. The young mind behind modest digital animation landmarks like Muromi-san, Yatterman Night and even Monster Musume is one I’ve touched upon briefly before, but his background and ties to the webgen movement can’t be understated. We tend to talk about things coming full circle when it comes to friends helping one another out on their respective shows, and this is just one such case; when examining Shun Enokido and Sakazume’s career, you’ll quickly notice that both played major parts in Yoshihara’s directional endeavours ever since Muromi-san. Sakazume himself was a major player on both Muromi-san and Monster Musume, while Enokido’s work became synonymous with Yatterman Night‘s most stunning moments. In that regard, it only makes sense that Yoshihara would return the favour and come along to help them out on their own big project.

— Unfortunately though, his work ended up being the part that suffered most due to ghosting on part of the TV broadcast. The fact that he wasted no time in posting up the genga of his scene might be a sign of how upset he was over his sequence getting butchered like that. Not something one can blame him for, really.

— Let’s not forget that Keisuke Hiroe and Takayuki Kikuchi also worked on this fight, according to Enokido himself. Unfortunately I’m not familiar enough with either to identify which parts they handled, but the flat shapes as Siegfried plummets while being bombarded by Karna feels like peak webgen aesthetic. The raw drawings of Siegfried being roasted within the flames caused by said bombardment before the eventual explosion (highlighted by impact frames, of course) is a neat touch, too. The ghosting did take its toll here as well, so I look forward to seeing how this looks on the blu-ray release.

— Production-related matters aside, Mordred and Shishigo’s interactions may well be one of my favourite parts of the show so far. The former’s attitude over being stuck in a tomb followed by her reaction to being called King show just how full of character she is. Shishigo continues to prove he’s not the walking cool old man archetype one would expect him to be, either. 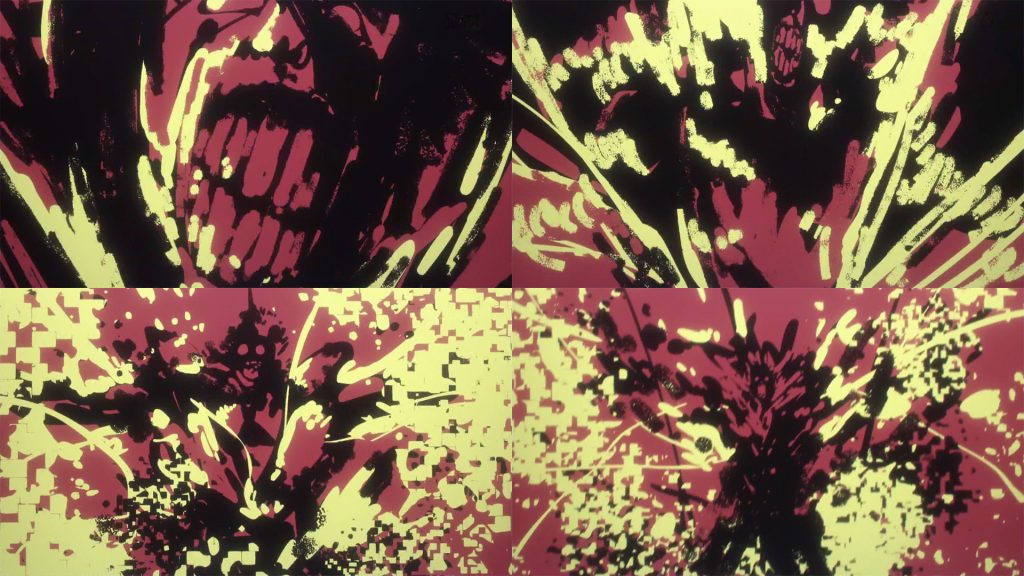 — For an opening directed and storyboarded by Tomohiko Ito of Sword Art Online and ERASED fame, I’m honestly a bit let down considering his memorable previous work in this regard. The tempo of the song itself had me curious about how the sequence would be built around it, but very little of it is noteworthy. Even the action sequences feel standard at best, which is a shame for a series that prides itself on its spectacular fights.

— That being said, one touch I really like is the shots of each master superimposed over silhouettes of their Servants. It ties neatly into what I assume will be the eventual reveal that Shiro somehow has control over all but one of the red faction’s Servants considering we only see him and Shishigo there. Not so much a hunch as they outright tell us moments after.

— Simple, yet I like this one a lot! The focus on Jeanne herself, as well as the parallels between her and her host Leticia, serve as a reminder that this isn’t just a story about the Great Grail War. Rather than the ones that clumsily try to encapsulate an entire series in less than two minutes, the most inspired OP and EDs tend to be the ones with a clear focus, even if they aren’t particularly fancy about it. This may be my favourite GARNiDELiA song, too, so that helps.

Thank you for the insight on the production!
Could you briefly explain what exactly the results of said “ghosting” were in this specific case and how/where this exactly happened? Was Yoshihara upset at the editorial staff for messing with his cut or was it the actual TV broadcast?
This also might explain why some people had problems with this particular scene and its execution.

I’ll skip the more technical description (because I don’t know it myself!) and just say that it’s entirely down to the TV broadcast itself messing things up. If you take another look at the scene, you’ll notice how it looks like a number of frames get all jumbled up, resulting in a blurry mess, especially towards the beginning. That’s not how it’s originally supposed to look, and even the staff watching at the time were surprised with just how hard it hit here (Enokido even said to wait for the BD release to see it without all that.)

Oh wow, I can only imagine the frustration Yoshihara & co must have felt upon seeing that. But quite interesting that an issue like that even occurred ( though that might not be that unusual in the day & age of late material delivery ). Thanks for clearing that up!

”The focus on Jeanne herself, as well as the parallels between her and her host Leticia”

Absolutely incorrect tho?
Apo is literally about MC and his name is Sieg (Homunculus).

If you are expecting Apo to be focussed on Jeanne, as well as the parallels between her and her host Leticia, then that is absolutely NOT what Apo is. You should just drop it maybe this show wasn’t suited to you (or some people). You will never like it no matter how good it turns out.

Goodness, friend! Whilst I do appreciate your concern regarding the possibilities surrounding my enjoyment in regards to this piece of televised entertainment, I must inform you that my comment was merely directed towards the theme of the ED itself! Worry not, though. I trust this is a common misconception for one to have, and not at all representative of your character. I’m certain the gross misunderstanding as to the manner in which I derive joy from the time I spend with it each week is, too, merely a consequence of this. Thank you for the comment, however. I would love… Read more »

I’m sorry I really confused myself.

Thankyou for this review, sad to hear ghosting ruined this awesome scene 🙁 looking forward to the blueray release, i know this blog is about sakuga but can you explain me why the sound effect is terrible in this fight scene is that also due to broadcasting issues or from the studio itself?!

That’s 100% down to the sound direction, which is…not very good, yeah. Hopefully it’s not as bad for the other fights, because I value my ability to hear.

Thanks for clarifying and yeah hope they wont mess up again

Aren’t directors extremely busy when they’re appointed to direct any series? Won’t it affect Black Clover if Tatsuya Yoshihara was involved in this episode?

The good news is that providing key animation for one episode (especially for faster workers) isn’t too much of a timesink. The bad news is that, well, Black Clover’s future isn’t very bright regardless of Yoshihara’s adventures in the Nasuverse.

What is the deal with Black Clover?

Pretty much the exact same staff as Twin Star Exorcists doesn’t inspire much hope considering how things went for that show.

Sorry if this is a stupid question but I noticed that the Tatsuya Yoshihara scene was dimmed. I understand when broadcasted episodes are like that because of the anti seizure laws but do streaming services fall under the same type of guidelines?

Hey there. I noticed someone uploaded some BD-sourced clips from this episode (and the other first 12). Hot damn, do they look good. My own box set is due tomorrow (no subs, but eh, I’ve watched FApoc enough times to not need them anymore) and I just can’t wait. The Netflix version is okay but it still has visual issues. I was wondering if you guys were going to do any follow-up commentary now that a proper HD version is available. I’ve really enjoyed your coverage of Fate/Apocrypha. It’s been very refreshing and educating. The much more common negative reactions… Read more »

Thanks a lot! I’ve always found myself in an odd position with Apocrypha considering I enjoyed it a lot despite being a big fan of the series as a whole, whereas most places it’s either the diehard fans vs the Apo fans who dislike the rest of the series. It’s definitely a special show, even if it could have been so much more with a healthier schedule, largely thanks to the talent it was blessed with. #22 may have been the true passing of the baton, but we’d seen plenty of times before how much of a hand the younger… Read more »