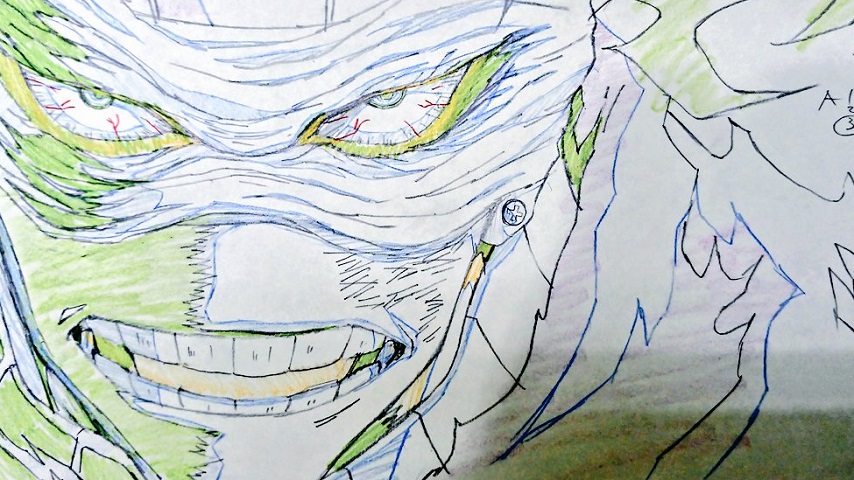 While I’m mentally preparing myself for the upcoming climax of this arc, here’s a look at the two episodes preceding it. I decided to switch the coverage to our Production Notes format for now. Hopefully it’s a change for the better! It shouldn’t come as a surprise that there was plenty of material to cover, so let’s dig in!

— Viewers with a knack for spotting uniquely stimulating visual compositions might have noticed that the quality of the storyboards in this episode was markedly above the series’ standards. Tomo Okubo, whom you might recall from episode 20, returned to handle this role with more finesse than ever. It’s not an exaggeration to call Okubo series director Kenji Nagasaki’s right-hand man and protégée. Let me explain: his career started at Sunrise Studio 3, where he worked on setting production duties [設定制作] for shows such as Gundam 00 Second Season (2008) and Gundam AGE (2011). In 2013, he debuted as storyboard artist and episode director on Nagasaki’s Gundam Build Fighters TV series, then went freelance after working on its sequel TRY in 2014. He immediately followed Nagasaki to studio Lay-Duce, where he worked with him on his next project Classroom Crisis (2015). That might have been a turning point in his career, as he was credited on it as Assistant Series Director right next to Nagasaki. That’s admittedly not speculative anymore – if you pay attention to the opening credits, you might have noticed that Okubo was promoted to Assistant Director for HeroAca S2‘s second half, and that’s quite the big deal. He’s clearly a person Nagasaki doesn’t only trust a lot but also senses potential in, since he’s progressively been granting him opportunities that entail higher responsibilities. And there’s a good reason for it, as this episode showed! Leaving aside the big action scene at the beginning of the episode (more about it below), scenes like these showed that Okubo is a director with good sense of staging and capable of delivering intense gradation when needed. As far as I’m concerned, his work here was a huge step up from his previous effort on episode 20.

— This episode couldn’t have asked for a stronger start than the fight between Deku and Gran Torino. Yasuyuki Kai returned to action supervision duties and it really showed, even more so than back in episode 25. The whole sequence was a seemingly never-ending display of strong layouts and clever use of 3D backgrounds, obvious staples from Kai’s years spent working on Haikyuu!. Just look at Deku’s jump here – this little giant looks like he’s about to smash a quick spike, while Gran Torino can only watch as he won’t be able to properly block it with his height! Jokes aside, I’m glad that the animation was strong enough to support Kai’s ideas; he presumably animated a chunk of the scene himself too, even sneaking in some hand-drawn backgrounds. Masaya Sekizaki revealed on twitter he animated the short bit of Deku bouncing off the ceiling and attempting to catch Gran Torino.

— With Yoshihiko Umakoshi being too busy directly serving as animation director for the upcoming episode 30, character design assistant Hitomi Odashima was tasked with chief animation direction for the first time in the series. Her style is very compatible with Umakoshi’s, which was fairly evident through some of the outstanding shots in the episode. Just take a look at these thick outlines and detailed shading. Thanks to her skill, I believe the fact that this episode was the first one (it took quite a long time!) without any kind of supervision from Umakoshi became merely trivia.

— The Noumu attacking the train and Gran Torino’s response were animated by the outstanding mecha and effects animator Sakiko Uda. Sakuga fans started to notice her work during Gundam Build Fighters Try (2014), where her animation stood out after the departure of the prequel’s main animator Sejoon Kim. It’s sadly still unusual to see women specializing in mechanical animation while also being very enthusiastic about the genre, but I believe that cases like hers serve to disprove gender stereotypes that get treated as invariable rules.

— This action-packed episode was handled by one of the most profilic storyboard artists in the industry: Michio Fukuda. He’s been regularly appearing on BONES’ anime for as long as I can remember, and seeing him return over and over speaks volumes about his reliability. While I wouldn’t rate his work on this episode nearly as strongly as Okubo’s on the previous one, he reconstructed three very busy manga chapters into one episode rather competently. My favourite bits were the low angle shots of Stain as he overpowered and stabbed Iida. Combined with some of the finest drawings in the episode, this sequence highlighted Stain’s terrifying control over the situation. Deku’s close-range combat scene with Stain also delivered as much intensity as required, helped in no small part by Yuki Hayashi’s godly score. The female duo Saka Ikeda and Hitomi Ezoe split the directional duties this week. Ikeda assisted with direction on episode 22 and this was her debut as a full-fledged episode director, albeit for only half an episode. Ezoe on the other hand has been regularly working on the show and previously handled episodes 16 and 22. The reason for this collaboration could be Ezoe’s increased workload, as she was also in charge of Princess Principal‘s first and Welcome to the Ballroom‘s third episodes.

— As you can see above, this episode had by far the largest number of animation directors in the second season so far. And as it tends to go on chaotic endeavors like that, the usual polish of in-house episodes also took a noticeable dip; people would assume that more people supervising the animation means more polish, but when this happens it’s usually because something had gone very wrong to begin with, and no army of animation directors can magically solve it. The reason for it could be the inevitably production schedule degradation, as well as the higher priority of Yoshihiko Umakoshi’s upcoming episode. But needless to say, it was far from a complete disaster! Takahiro Komori did chief animation direction for the episode, as well as more hands-on work on the second half. His art isn’t as compatible with Umakoshi as Odashima’s, perhaps simply because the majority of anime he worked on as main staff had very clean drawing styles (like Darker than Black). Takashi Mitani meanwhile did animation direction for the first half, and his presence was as usual very visible. I’ve highlighted his effects animation in my previous posts, and yet he keeps on impressing whether it’s through complex setpieces or short loops of effects drawings. His FX mastery has become noticeable even when he’s just supervising the work of other animators! Hosu city in a devastated state after the onslaught of Noumu was an ideal playground for him to work with smoke, fire and water effects. His presence in the second season is just as important as Kazuhiro Miwa’s was for the first.

— The key animation list contains the usual suspects plus a couple of guest appearances. Noriko Morishima, who also assisted with the animation direction, was credited near the top of the list. I suppose she was called in to help as soon as she wrapped up her work on the second season of The Eccentric Family. Another interesting artist in the credits was the Chinese animator Yang Ting Mu, who animated a number of cuts of Todoroki fighting Stain. The popular Hironori Tanaka animated the bus exploding in front of Deku, while Masaya Sekizaki handled Iida’s attempt to assault Stain.