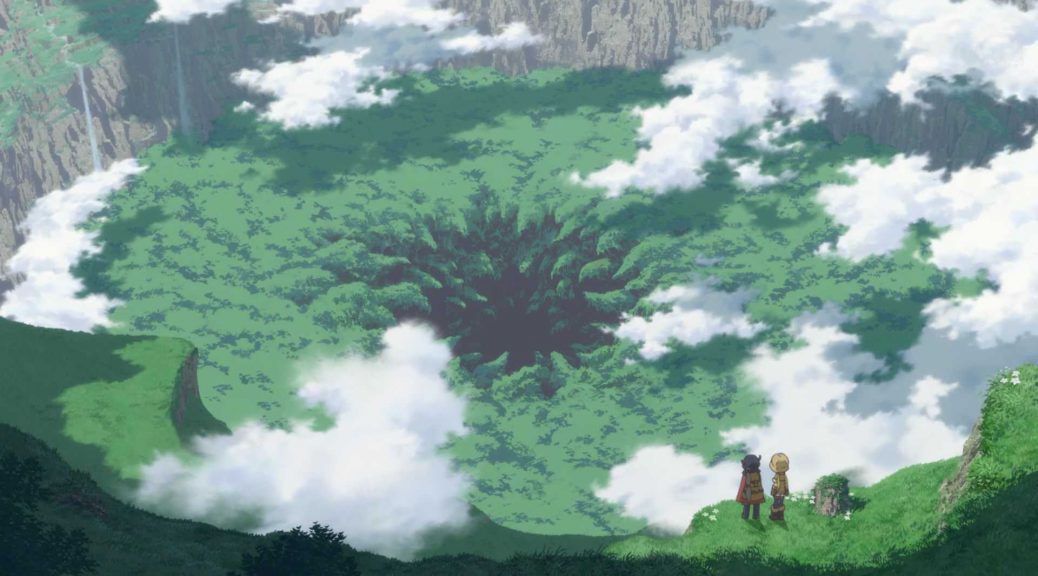 We return to the abyss to explain its mysterious appeal, and how the creators of the show are effectively drawing us deeper and deeper into this mysterious world. Let’s learn more about the setting of Made in Abyss and Kinema Citrus’ crew.

— A touching episode, and also the one that’s revealed the most interesting details about the society surrounding the abyss. Ideas like how even the transmission of information is vertical, and the very concept of truth stratified, feel like they naturally belong to this outlandish world. Even the backgrounds, which are as usual one of the strongest elements, were particularly on-point depicting their society. No part of the town feels exactly opulent, but you could still feel the degradation the closer they got to the slums, which are densely packed with withered detail.

— If I had to highlight a creator in this case, it would be the animation director Kaori Higuchi. She’s a very active veteran who specializes in animation duties, but has also branched out in some curious ways. While her storyboarding work isn’t all that unusual (though I would highlight that she’s handled a handful of episodes of the current charming iteration of Pokemon), Higuchi’s portfolio includes interesting cases like character design and animation direction work for the PS1 game Kisetsu wo Dakishimete; that anime-style visual novel appears to feature quite a lot of footage animated at Production I.G, which Higuchi was heavily responsible for. That was almost 20 years ago at this point and has no real link with her work on this episode, but uncovering things like this now and then is its own reward.

— I anticipated the abyss as much as I dreaded it – also in a good way, I promise! While things might be bright and colorful still, the atmosphere in the abyss is constantly oppressive and threatening; it borders on claustrophobic at some points, even within the literal safety net at the beginning of the episode that should convey security instead. It’s impossible to shake off the feeling that unseen shadows hide terrors that are just waiting for their chance to strike. This is mostly down to the framing, but there’s a conceptual aspect to it as well. Ideas like the abyss within the abyss show how there’s a force that always wants to pull you deeper in, and even though we haven’t encountered true danger yet it’s obvious that its nature is malicious.

— While on that regard, there’s something about the depiction of the abyss that I’d like to mention. The imagine-nation feature on the series had a brief segment where the art crew explained the layered construction of the backgrounds and how they exaggerate their misty, unsettling appearance the further they are. In the abyss, anything other than what’s right in front of you is shrouded in mystery, and the same location can appear very different. 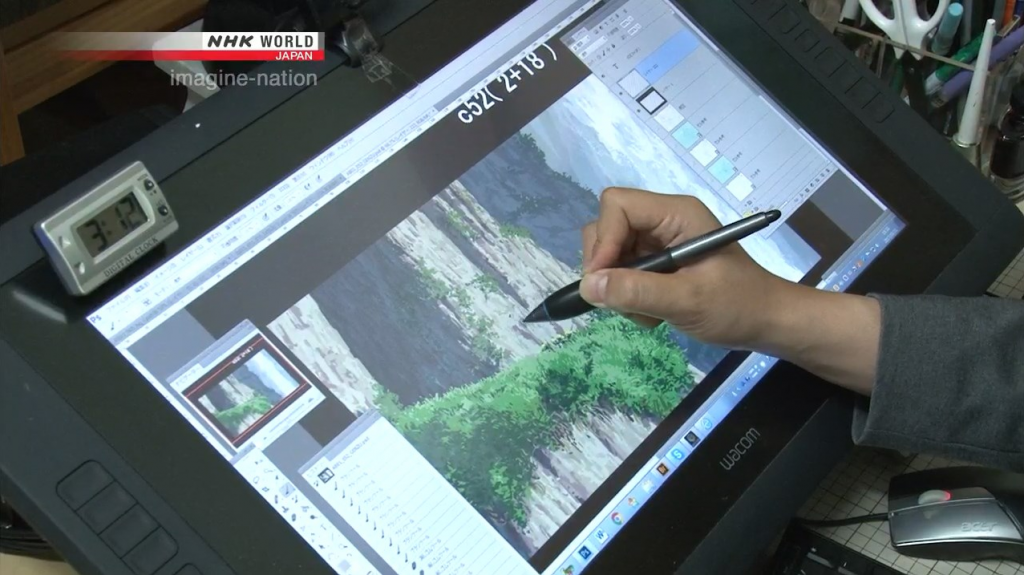 — This was the first episode not storyboarded by the series director Masayuki Kojima, but don’t take that as a sign that they considered it unimportant. Quite the opposite, in fact! It was in the hands of the assistant series director Shinya Iino, so it understandably didn’t feel like much of a departure from what we had seen up until this point, as he’s very much a core member of the creative team. Iino has been steadily moving up at Kinema Citrus: first as a production and setting assistant, then as episode director, and from 2015 onwards as a storyboarder as well. His role in Made in Abyss entails more responsibility than ever, but if I were to judge by his work so far, he seems plenty comfortable with it.

— An equally telling sign of how important the episode was deemed is the animation crew that supported Iino. The animation director Kuniyuki Ito has also established himself as an increasingly more trustworthy supervisor at Kinema Citrus, so much so that he was appointed substitute character designer for the new Yuyushiki OVA. I admit that I don’t rate him as highly as the best supervisors the studio has sported – Majiro’s wonderful sense of looseness left an immensely high bar – but he’s reliable without a doubt. The list of animators he was commanding features some of the studio’s stars like Takayuki Kitagawa, as well as interesting freelancers like the surreal master Tamotsu Ogawa. And perhaps more importantly, the staff lists in general appear healthier than any Kinema project in recent times. And that shows in their work, which after lowering its aim past the first episode has remained very consistent. I hope I’m not jinxing it now, but it’s good to experience a TV series that doesn’t wildly fluctuate in quality; I’m not concerned about invariable aesthetics, and production priorities matter, but I’d rather have a show that is always pretty nice – and Made in Abyss is delivering!

— As many talented individuals are there are though, it’s once again Kou Yoshinari who left the most memorable footprint in the episode. The return to the abyss also meant that Aninari’s role as its creature designer became relevant again; he’s not just the person who defined their aesthetic after all, he’s also been animating most scenes featuring unknown monsters himself. His work on this episode made it obvious that the nature of the movement of all the creatures is meant to be different from the human characters, as well as distinct amongst themselves. Since we’ve mostly been dealing with large beings their motion is on the choppier side, but the insect from this occasion and the serpent we saw in the intro are still clearly distinct. Using modulation and the feel of the movement to set apart fundamentally different beings is far from an original approach: the most famous instance in recent times would of course be Mushishi, but my personal favorite was its application in A Letter to Momo. I’ve noticed criticism about the scene with the huge ant, since its choppy bouncing can come across more as silly than threatening, but I feel that’s because the focus is more on portraying them as alien than as scary in a straightforward fashion. Rather than immediately spooky elements, it’s the unknown factor that makes the abyss as a whole terrifying, and that philosophy seems to apply to Aninari’s creatures as well.

I think that, if the PVs are anything to go by, Kinema Citrus were done with about at least 7-8 episodes one month before the series’ broadcast: the cute bunny’s appearance. Really happy with the adaptation, I mean, nobody needs how to know how those rocks in ep. 03 are called n.n Speaking of Aninari, I thought it looked choppy because of the hardships of in-betweening such scenes… By the way, I found it a nice touch that, in the scene where the ant appears, when Reg defends himself with his hand, his hand changes art style to fit that… Read more »

If he hadn’t shown time and again that he can actually animate his illustration-like work I’d probably think that too. But knowing that, and seeing the difference between how each creature moves, makes it feel entirely intentional. The clunkiness fits the ant either way, as far as I’m concerned.

I still can’t fathom how anyone could dislike the animation in the weird creature encounters. It feels so bizarre and otherworldly and impressionistic, and totally nails that sense of terror that would come with encountering something like that. But then again, I adore Ping Pong’s visuals, so maybe I just have a soft spot that sort of style.

The show’s more polished design aspects like the painterly backgrounds and adorable character designs are wonderful too, of course, but I’d personally have to disagree with any complaints that the monsters encountered feel too incongruous.

I think it’s precisely what you (and I) enjoy about them: even though the show has successfully convinced us that those creatures belong in there, their appearance and movement feel very unnatural. I think that’s a cool approach, but most anime viewers react negatively to elements that feel either too weird or simply different from a work’s standard state. And I wish they were more receptive, but I don’t want to frame it as an elitist “they just don’t get it” problem. I’m sure some of them do, and just don’t like how damn weird it looks. Fair enough I… Read more »

I totally agree. It would be really silly to think ourselves superior just for enjoying a bit of experimentation. There’s certainly an argument to be made for the merits of visual consistency, even if it’s overused the anime community. In fact, one of my favorite parts of the design work is how they prioritize visual consistency rather than big sakuga bursts at the expense of the rest of the animation (yea, I know that’s technically a false dichotomy Xb) And even if there wasn’t, people are entitled to prefer whatever style they like. I may not get how anyone can… Read more »

That part of Lupin Part IV was exactly animated by Shinya Ohira [Ping Pong OP’s director] and Hokuto Sakiyama [One of Ping Pong Op’s Key Animator] under the storyboard of the young animator Yuuya Takahashi.

Thanks for the clarification. In is a fun, well-crafted little bit of animation, but it was also very “uhh, okay… I guess they’re animating in this style now.” I found it pretty enjoyable, but it still serves as a good example of a more experimental cut that threw a number of fans for a loop due to the sudden style change.

Here’s the full clip, for those who are curious:
https://sakugabooru.com/post/show/19132/animated-fighting-lupin_iii-lupin_iii_-2015-shinya