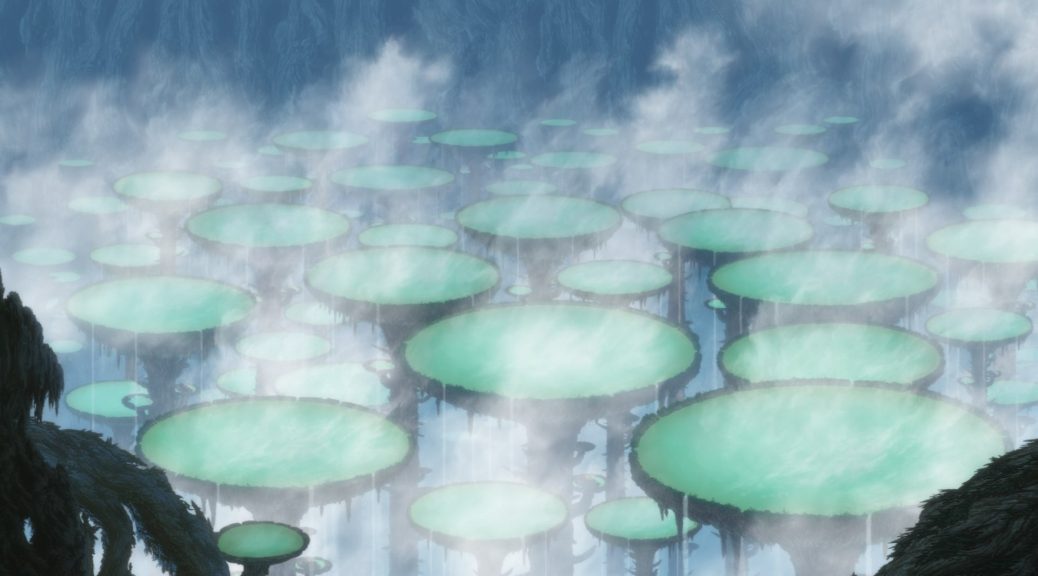 It’s time for a rather extensive look at the latest episodes of this show, and that means we first get an encouraging anime original moment for Riko…and then we truly descend the abyss. The craft of this world, how to convey visceral pain in animation, how this production is faring and much more! Now more than even I can say that Made in Abyss is an excellent show, even when it tries to crush your soul and ruin your sleep.

— Anime original episodes are the bane of all source material diehards who obsess over the purity of adaptations. Thankfully, Made in Abyss understands itself way better than fans with questionable priorities do. There isn’t even an argument to be had about this episode being a stalling maneuver to kill time, as they’ve gone out of their way to make the finale a double length special. Instead, its purpose was to grant Riko a moment to showcase her growth, since her role in the last arc that the anime will cover is much more passive. But before that, we got to see her personal growth, the survival skills she’s developed, her hardened resolve, and perhaps most importantly, how she’s come to understand that Reg and her truly need each other. This might not have been needed on an ongoing serialization like the manga, but nearing the end of the anime it feels like a very appropriate detour. Sometimes you don’t have to take the tunnel that goes straight down right away.

— And speaking of passageways, this might very well have been Masayuki Kojima’s most blatant showcase of the visual abyss motifs. Nothing but round chasms to descend, pits to fall into, and even traps that come in the form of a hole. And so, after proceeding down even more than usual, the one moment where Riko ascends the abyss during her hallucination feels inherently off. It shouldn’t surprise me anymore, but this show is just so well constructed.

— The beautiful backgrounds are also entirely to be expected, although they get extra points this week for making a location that seemed barren on the surface and turning it into yet another rich setting.

— Rather than lose steam at the end, the production as a whole keeps chugging along, if anything accelerating a bit at this point. This episode was sprinkled with many moments of noteworthy animation, mostly orbiting around Riko’s struggles. There’s space for expressive movement – in fact, my favorite cut is her exhausted yet filled with resolve steps – but the scene that will catch most people’s attention is the final confrontation with the world’s most obstinate nightmare snake. It’s worth looking at it not only as a technically proficient moment with nice sense of impact, but also as the product of a curious collaboration. Makaria is one of the hundreds upon hundreds of subcontracting anime studios that keep the industry as a float as a whole, but that aren’t much of an entity individually; in fact, I would say it’s their talented art department Atelier Makaria that is more likely to gain any popularity before the animation crew does. That said, the latter has an interesting asset: despite being a Japanese studio, a series of exceptional digital Korean animators are contracted by the studio. Moa Ang, Myoun, Dongyoung Kim (aka ini), Irei Eri, this small circle has some truly talented people who are getting more and more chances to shine in this industry, despite the fact that many of them don’t even live in the country. Yet another perk of digital animation!

— It’s not easy for stylized animation to evoke visceral, almost tangible pain. The most macabre anime scenes tend to be detached from our own selves, and even the ones that leave a genuine impression rarely do so in a relatable way – which doesn’t mean they don’t do their job, it’s simply not their forte nor their goal to begin with. That said, there are rare moments where anime aims at that and actually succeeds. I still consider the first episode of Haibane Renmei the gold standard in this regard; a series that is otherwise mostly low-key features a chilling moment where the protagonist Rakka has her wings burst out of her body. It’s carefully depicted, embraces the gruesome details, yet stays away from outlandish direction. This also avoids the fetishization of pain, as you simply get the raw deal. It’s that natural approach to outrageous circumstances that makes it terrifyingly relatable, and that’s exactly how I felt during the greatest (and worst) moments of Made in Abyss #10. The thoroughness when depicting Reg’s desperate attempts to save a Riko in critical state, treating it as if it were a real procedure to cure an impossible illness, are something that I believe plays to director Kojima’s strengths. He’s not the best when it comes to the surreal (as the uninspired sequence of Riko tripping proves) but when it comes to detailed, orderly craft he’s shown to be an excellent director. How lucky of us, to have someone who can craft believable nightmare fuel by treating it in such a grounded manner. Enjoy never sleeping again.

— This is obvious so I’d rather not spend much time on it, but of course the audio aspect was going to make a difference in this episode. Riko’s voice actress warned us that this episode would hurt. Anyone who heard her desperate cries would agree. And it’s not just her, the sfx of the bone breaking will unfortunately stay with me for a long time.

— In episodes like this we get to experience the good and the bad when it comes to Made in Abyss’ background art – obviously the positives outweigh the weaker elements by an order of magnitude, but it’s important to keep in mind that it has its own share of shortcomings as well. The current setting encapsulates the conceptually fascinating world design, and at some points the background themselves have that theatrical level fullness that only the absolute best work does. At the same time, episodes where the weaker shots are more prevalent are at the risk of shattering the illusion; certain moments make it incredibly easy to tell apart the exact digital brushes used to create the scenery, and that’s when a world simply becomes an image. Not that this is a revelation – it was traumatic, but I think I got over anime not being real after failing to fire a kamehame-ha – but for a show that has managed to craft a world that feels so organic, artificiality can be kind of a deal-breaker. Perhaps this is related to the outsourcing they’re forced to undertake, since the core crew’s depiction of Nanachi’s home in the opening and this episode’s are clearly different. Either way: ideas are consistently outstanding, execution is often quite good…but not always! 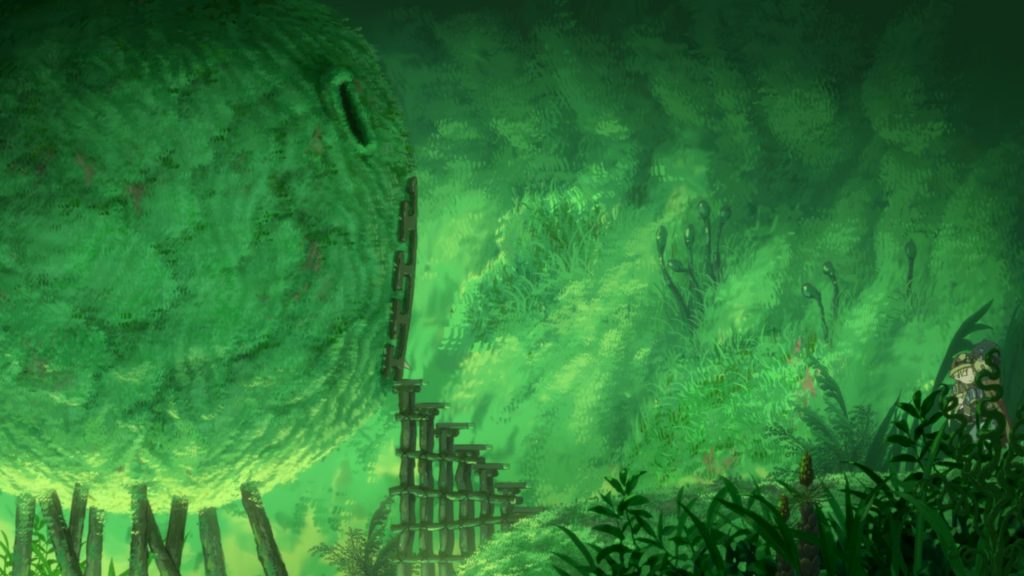 — While the animation process inevitably gets more hectic as we approach the finale, the stability of the end result is commendable. Were it not for the long list of supervisors, it would be hard to tell that this episode wasn’t as smooth of a production as ever. It’s worth noting that the vast majority of key animators who worked on this episode had either never touched the show before or contributed very little to it, so this might be another way to give the project breathing room. This isn’t to say that it wasn’t in good hands, of course; Kai Shibata, whose charismatic character motion has been part of many outstandingly animated episodes as of late, returned to the abyss after having animated another brief moment in the opening. If I had to choose my favorite cut though, I would doubtlessly go with Reg’s desperation as illustrated by Katsuya Yoshii. He matured as an inbetweener at studio Khara and nowadays he’s taking his first steps as animation director (this episode included), but he’s already shaping up to be a figure to follow.

Loved that Riko cut from episode 9 with her final steps as she reached the top of that hill too. It did a great job of giving her legs volume and portraying effort. It is somewhat difficult to express perhaps but that cut I think managed to give a convincing impression that those were actually legs of muscle and bone working, rather than a flat 2D representation of legs.

Not just that, I think it captures the physical effort and *emotional* weight. Very neat moment honestly, even if it’s not the most spectacular piece of animation in the episode.

Episode 9 is an anime original in that it uses material that didn’t made it to the manga due to deadline. They took the mangaka’s original concept of what should’ve been in the first place and put it on screen.

Really? That’s really cool to hear! I love that this adaptation has so much respect for the original material. Do you know where that information was announced?

This is truly another wonderful episode, and one of the most unsettling and impactful I’ve seen in years.

Where do you put chances for a second season? It seems that even if the anime is a modest seller on disc (as it likely will be , even with Stalker’s usual premium-price underestimation) the manga has seen a considerable sales boost.

I don’t think it’ll happen unless they know for a fact that they can fully adapt it, so the most important variable here might be an entirely behind the scenes one.

Well, we don’t have any specific idea of when the manga is ending as far as I know, so that could certainly be a factor.