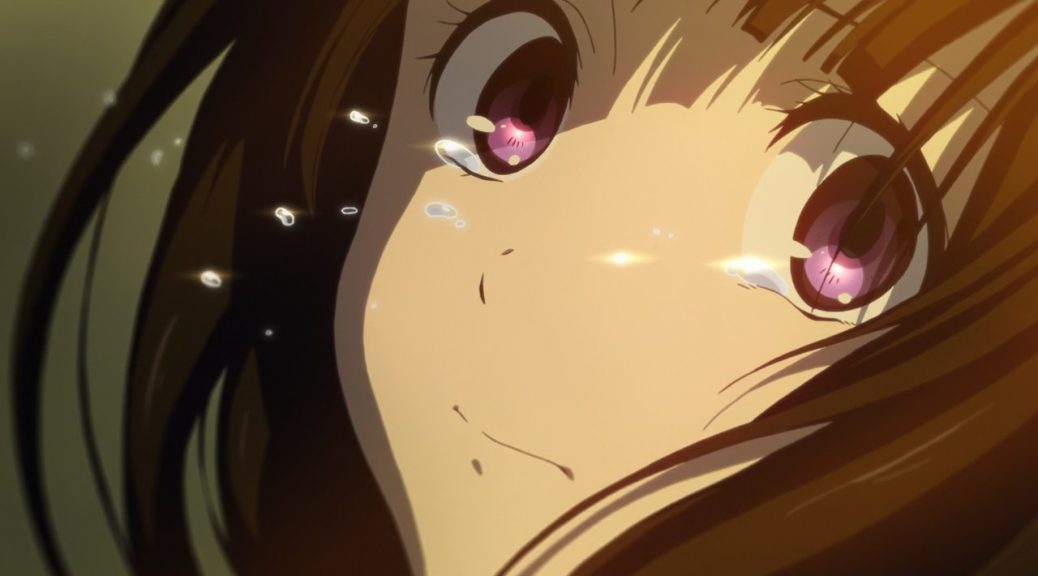 Today’s Hyouka interview takes a different angle, by asking the main responsible behind its animation about his thoughts on the character design process, that he was allowed quite a lot of freedom for. Enjoy!

Futoshi Nishiya – Animator and character designer at Kyoto Animation. Among his past works are Nichijou, Free! and High Speed!, and A Silent Voice.

─ Please tell us how you were put in charge of the character design and chief animation directionAnimation Direction (作画監督, sakuga kantoku): The artists supervising the quality and consistency of the animation itself. They might correct cuts that deviate from the designs too much if they see it fit, but their job is mostly to ensure the motion is up to par while not looking too rough. Plenty of specialized Animation Direction roles exist – mecha, effects, creatures, all focused in one particular recurring element. for Hyouka, as well as your thoughts when you received the offer.

Director (Yasuhiro) Takemoto recommended me to be the character designer and chief animation directorChief Animation Director (総作画監督, Sou Sakuga Kantoku): Often an overall credit that tends to be in the hands of the character designer, though as of late messy projects with multiple Chief ADs have increased in number; moreso than the regular animation directors, their job is to ensure the characters look like they're supposed to. Consistency is their goal, which they will enforce as much as they want (and can).. I had initially braced myself when I heard the story would be a youth mystery, but once I actually started the novel, it was a breeze to read. The more volumes I finished the clearer each of the Classics Club member’s personality became and before I realized it, I was hooked. Obviously the segments where they solve everyday mysteries are entertaining, but it’s each character’s charm that really pulls you in, which is why I considered the designs to be of great importance.

─ Please tell us about your impressions of the four main characters, and the main features of their designs.

Houtarou tends to find things bothersome and is an unsociable person. Even though for the most part he barely smiles, I wanted to incorporate cute facial expressions that are appropriate for his age. From a design point of view, I was mindful to give him a disapproving look and ruffled hair. His characteristic is the bewitching charm oozing out of his eyes peeping out from between his coarse bangs. As for Satoshi, he’s a cynic and a joker. Spiky and light short hair is fitting, isn’t it? He’s also surprisingly short, more or less around Eru’s height. Satoshi bears all sorts of emotions inside but I aimed not to let them show and to draw him cheerful on the outside.

─ In a way, it feels like he is the complete opposite of Houtarou. Next, what about the female characters?

Eru is full of curiosity in addition to being a neat and tidy lady. Since she has long black hair, I was careful not to make her appear gloomy at first glance. Her design’s main quirk are her fan-shaped bangs. Furthermore, I’ve made an effort so you can clearly recognize the gap between her usually calm demeanor and the times her “I can’t stop thinking about it!” kicks in. In Mayaka’s case, my first impression of her was that she’s a small yet strong-willed girl. That’s why I gave her a soft-looking short bob haircut and slightly almond-shaped eyes. Her petite appearance and ever-changing facial expressions are her charm.

─ Apart from the Classics Club quartet, were there any characters whose design you were fixated on?

I guess Irisu kind of fits this. There’s the empress aspect supported by her strict and cold appearance, but I hoped I could make her a bit more feminine by giving her a white hair band. You can also see a cute facet of hers later in the show so please look forward to it.

─ I’m looking forward to it. About the character designs in general, what kind of factors were you conscious of?

While taking the source material’s atmosphere into consideration, I decided on less other-worldly and more down-to-earth character designs. Houtarou and co. have become high schoolers just recently so I wanted to avoid stiffness and add young, endearing elements to them. And so I always tried to maintain that slight cool and cute flair in the drawings. 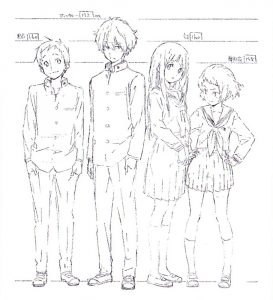 ─ Regarding the character designs, were there any instructions by the author of the novel, Honobu Yonezawa, or director Takemoto?

I did not receive any detailed instructions from Yonezawa-sensei, but I felt the need for the designs to blend in well with the source material’s atmosphere, which is why I struggled to preserve the characters’ images. As for the director, he wanted me to pay focus on maintaining a visual balance with the Classics Club quartet and give each of them powerful gazes.

─ Please tell us if there are any character aspects in particular we should keep an eye on.

On the whole, I would like you to look at the changes that take place within Houtarou and the others as the story goes on – with special attention given to Satoshi, who’s the toughest nut to crack among them!

─ It seems like Satoshi has some quirks too. If you had to name a favorite character, would it be him?

Of course I like everyone and that includes Satoshi, however, the one I feel the most empathy for is Houtarou. He usually acts sullen but when he interacts with Eru, he gets flustered and makes an embarrassed face which is fun to draw.

─ The gap between the times he becomes flustered and how he usually acts is indeed enjoyable to look at. I noticed this especially in episode 7. Well then, what are your thoughts about the remaining characters?

Sawakiguchi is amusing, isn’t she? I tried to incorporate her idiosyncratic personality into her hairstyle’s design. I also like the Tanabe and Kugayama duo, as well as Haba’s mean-spirited nature.

─ Haba does indeed give off a mean-spirited impression, but you just cannot hate him (laughs). Next, which character was fun or easy for you to draw?

I think the times where I drew the silhouette of Houtarou’s hair were the most entertaining ones. On the other end of the spectrum, I had trouble bringing out the soft feeling of Mayaka’s hair, though I got the hang of it by now.

─ It does indeed appear like every character has a quirk in their hairstyles. How did you feel when you actually saw the characters move?

I’ve already participated in previous projects as a character designer and animation director, but there was a difference this time around: it was neither a light novel nor a manga but a novel, so I started off with a blank canvas with barely any pictures as reference. That made the moment when I saw the finished footage more moving.

─ Since you had to begin from scratch, the excitement you felt was twice as much, wasn’t it? Next, you are not only responsible for the character design but also for the chief animation directionAnimation Direction (作画監督, sakuga kantoku): The artists supervising the quality and consistency of the animation itself. They might correct cuts that deviate from the designs too much if they see it fit, but their job is mostly to ensure the motion is up to par while not looking too rough. Plenty of specialized Animation Direction roles exist – mecha, effects, creatures, all focused in one particular recurring element.; if you have any anecdotes where you struggled with holding both positions, please share them with us.

When you’re in that supervising position, you ideally want to look over all episodes so the workload you have to check will inevitably increase. On top of that, it’s also common for cuts from several episodes to arrive at once so switching your mindset and empathy depending on the kind of content in each cut is both challenging and fun.

─ Thank you very much. Well then, please tell us what you personally think are this work’s highlights.

The acting conveys each character’s distinct personality and I consider that a point worthy of note. On top of that, I would like you to keep an eye on the subtle changes in the distance between Houtarou and Eru as well.

─ Lastly, please leave a message for the show’s viewers and the readers of this  website.

I would be glad if the facial expressions and character acting, which are based on the delicate portrayal in the source material, managed to captivate you. Nothing would make me happier if you came to like the idiosyncratic members of the Classics Club.

Originally published in issue 5 of Otona Animedia 2012. Translated by Pen, who will be spearheading this special Hyouka project.

I definitely liked his work on Hyouka. When I watched the first episode, though, I found the character acting forced. I got the impression they were over-animating simple actions and gestures. However, such impression vanished after the second episode.

But anyway, the character design itself, while not amazing, is pretty solid. The silhouettes are easily identifiable, you can see a decent amount of personality looking at the designs, they are appealing, etc. I can see how Chitanda’s black hair was an obstacle, but glad he managed to overcome that.