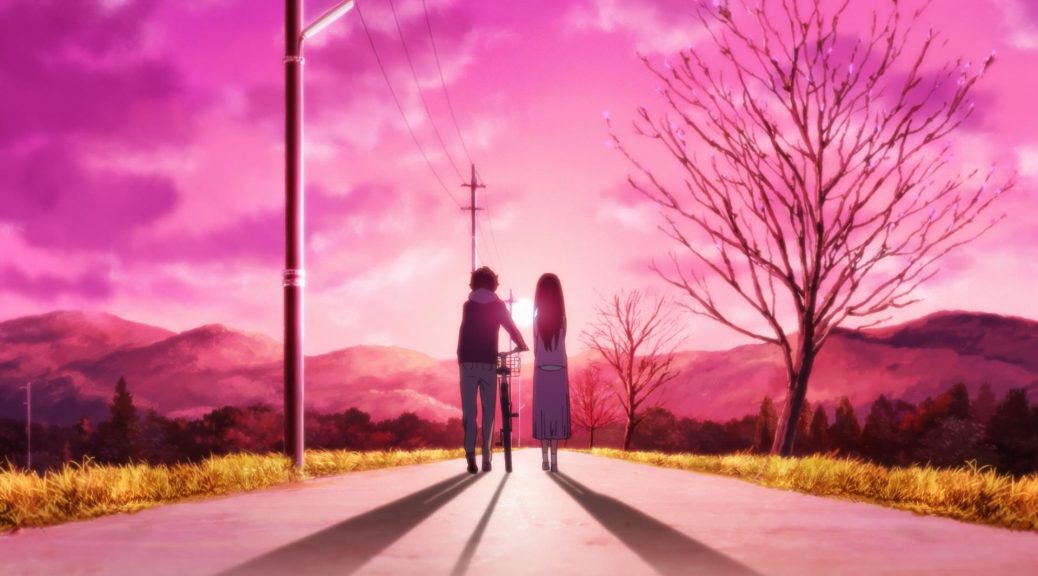 We move onto another aspect of Hyouka‘s production with today’s interview: the work of the art department, commanded by its director Shuuhei Okude. This is the insight of the artist who was in charge of the show’s background work!

Shuuhei Okude – Background artist at Kyoto Animation. Among his past works are contributions to right about any of their titles ever since Haruhi.

─ Please tell us how you became the art directorArt Director (美術監督, bijutsu kantoku): The person in charge of the background art for the series. They draw many artboards that once approved by the series director serve as reference for the backgrounds throughout the series. Coordination within the art department is a must – setting and color designers must work together to craft a coherent world. for Hyouka.

The main staff this time were chosen through an audition at director (Yasuhiro) Takemoto’s suggestion. I drew an artboard for the audition, so I suppose I got nominated because it caught his eye.

─ So that’s how it was. Then please share the thoughts you had after reading the source material, knowing you would be in charge of the art direction.

My impression of the Hyouka novel was that it’s a work with heavy and heartrending themes, and from an artistic view, I felt that a tone reflecting a subdued atmosphere would be suitable for it.

─ It seems like the director also wanted you to aim at a subdued atmosphere of sorts. What did you exactly come up with in order to capture that feeling?

First of all, I looked up various works with a similar atmosphere. As reference I used photos, movie stills, and things like that with bleach bypass from the Shōwa era – a time period when printing technology wasn’t developed yet – and crafted Hyouka’s world this way. Other than that, director Takemoto also had requests regarding the mood and visual density levels.

─ Besides director Takemoto’s input, how did you grasp this work’s artistic texture?

This is my personal opinion, but I thought that director Takemoto imagined the world the protagonist Houtarou sees, as art. Therefore, I assumed that the subdued tint devoid of flashiness is the world’s color as seen through Houtarou‘s eyes.

─ You’re referring to him seeing the world through a so-called gray lens, right? Next, please share the main concept that you feel defines this show’s aesthetic.

The concept is realistic backgrounds. Since it’s also a mystery work, I didn’t want to turn it into an outlandish setting. However, it wasn’t about simply seeking realism either, I aimed at backgrounds that would convey the feeling of familiar ambience.

I participated in the location scouting alongside the main staff. I collected material of many places in the Gifu prefecture’s Takayama City, which became the model for this work’s Kamiyama City, for five days. Locations included the school, shopping district and hot springs. We also visited the Kamo Japanese Iris Garden in Shizuoka’s Kakegawa City, which was used as reference for Eru’s house. Since a typhoon was approaching the Kamo when we went there though, there wasn’t a lot of time for us to shoot. It’s a construction from the Edo period so I‘d wanted to have a closer look – that was a real shame.

─ Which place in particular did you struggle with once you had finished location scouting and began with the art production?

The place I particularly struggled with was the geoscience preparation room. Initially, the plan was to let the geoscience lecture room serve as the club room just like in the source material, but when I had a discussion with director Takemoto after the location scouting, we agreed that it would be better if it was the geoscience preparation room instead, which is also why I had trouble creating it from scratch. The director told me that the concept was “an unorganized room” but if there were too many items, drawing those in every episode would be a huge amount of work, so I was quite concerned about the interior. After that, I prepared various drafts and showed them to the director, and among them there was also a suggestion with a more tidied up interior design. However, we thought that a certain degree of visual density was essential and for that reason, we decided on the current version.

─ There really is quite the visual density in the paintings. Well then, are there any locations in particular you were personally fixated on or had problems with?

I’m quite fond of the piece titled Eru’s house. I drew that artboard by using my childhood memory of staying over at my grandmother’s house as the basis. I hope I was able to bring out the darkness of old Japanese-style rooms, perhaps that feeling characteristic of Japanese houses and such. On the other hand, I had difficulty with the artboards of the ruins that appear in episodes 7-11 about the End Credits of the Fool. There are ruins so all I could paint were decadent elements, and since I always unconsciously envision the place that is going to be used as a setting, I was feeling gloomy during work all the time (laughs). 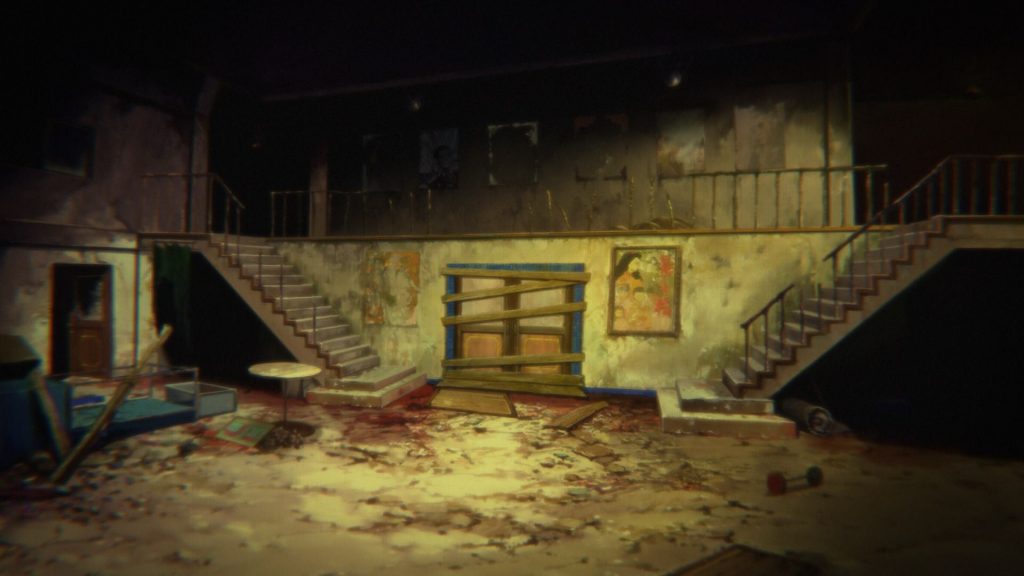 ─ Those are the struggles of empathizing, aren’t they? (laughs). I suppose there are art pieces in this work which were created from imagination based on the novels, but what are your thoughts on this matter?

I had difficulty painting backgrounds that don’t look unbelievable. Even if they were drawn from imagination, you have to give them form that looks like it could actually exist. In order to achieve that, I was racking my brain to come up with ways to bring out a sense of realism.

─ You were also responsible for the backgrounds in the first episode; which part left an impression on you while working on them?

It was the music room that appears around the beginning of the second half. Director Takemoto told me to make the color texture look like watercolor; when drawing backgrounds, I usually paint with poster colors, but for that scene I followed his advice and actually went with watercolor work.

─ Were there any parts you were fixated on?

I think it was the scene where Houtarou and Eru meet each other in the first half. The moment Eru’s “I’m curious about it!” gets triggered in the quiet classroom after school, the whole classroom turns into a vibrant place, and I think I was able to express that jolting feeling in Houtarou’s heart

─ That scene really was amazing. Well then, I’m going to ask you about the characters next; is there anyone you’re fond of, Okude-san?

My favorite is Houtarou. The reason being that his personality is similar to mine (laughs). I too am the type of person who won’t do something unless it’s absolutely necessary. However, doing the things I have to do doesn’t always work out as quickly as I’d like them to… (laughs).

─ (laughs). Please tell us what you consider this work’s highlights.

A point worthy of note is the change in the Classics Club quartet’s relationships. As the story goes on, the distance between everyone gradually keeps changing. When looking back on the story, isn’t it interesting how the characters you’re watching change on a weekly basis? From an artistic perspective, I would like you to pay attention to the changing color shades that were matched to Houtarou’s emotions. Also, apart from the school, various locations in Kamiyama City will make an appearance so please do look forward to them as well.

─ Lastly, please leave a message for the fans of Hyouka as well as the readers of this  website.

The crux of this work are the characters and story. It might be strange for someone involved in the art production to say this, but the characters’ complicated relationships as well as the character acting are meticulously and sincerely crafted. Furthermore, I’m snuggling up to the characters in my work so I can casually bring color into Houtarou & co.’s lives as a member of the art crew. I would be happy if you came to love Hyouka’s characters and shifted your attention to the settings such as the school or the various locations in Kamiyama City next time.

Originally published in issue 5 of Otona Animedia 2012. Translated by Pen, who will be spearheading this special Hyouka project.