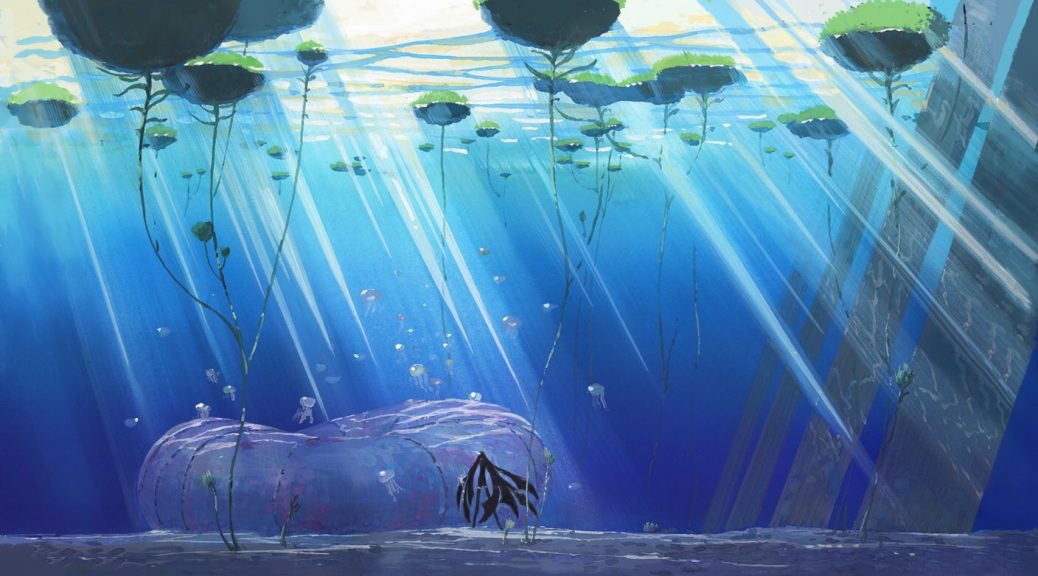 Dissociating individual elements from productions as a whole isn’t as easy as it might seem, but sometimes it feels like some aspects are faring particularly well. We’ve had seasons of anime with many instances of outstanding voice acting, animation, and this time around I would say we’re lucky in another regard — the art direction. There’s little to no barrier to appreciating beautiful sceneries in anime, and yet it tends to stay just as that, without giving actual names and underlining their role in crafting actual worlds. Let’s address that by looking into fall 2017’s most striking worlds.

Land of the Lustrous

It’s not as if these are in any particular order, but it was obvious we’d have to bring up Land of the Lustrous in this writeup. In its hands was not only portraying Haruko Ichikawa’s exotic setting, but also to avoid creating too much dissonance with the 3D characters. Anime background production has been majorly digital for years, and outright three-dimensional sceneries are becoming so common that you wouldn’t be able to fault them to take that route as the backbone of this series, which is almost entirely CGi otherwise. And yet they settled on gorgeous hand-painted backgrounds. Luckily for them, the character work embraces flat stylization to a degree where, despite the obvious differences between the sentient gems and the world they inhabit, it still all works together in the end. Or perhaps it’s not related to luck at all, since series director Takahiko Kyougoku has acknowledged that the 2D concept art by Yohichi Nishikawa had an immense influence on him when he was forming the show’s aesthetic. That’s not an extraordinary development in paper, but the circumstances are unusual; for the most part art crews aim at fulfilling the visions of directors rather than openly shape them, and Nishikawa’s role is non-standard to begin with — artboards are a factor early into essentially all projects, but they’re usually handled by art directors and designers rather than a concept artist that supercedes them, particularly so when we talk about TV shows. I suppose that it makes sense to break conventions in a project that defies how anime is crafted!

The end result is many desolate yet beautiful landscapes, where the unifying element between the gems and the world tends to be the palette. That makes me feel like the color designer Osamu Mikasa deserves a nod, but the art team itself has more important figures as well. Hisako Akagi — who recently left renowned Studio Pablo to, at least for a few projects, work at Orange — serves as the more traditional art director and designer, doing more hands-on work with the backgrounds when compared to Nishikawa’s conceptual input. Even though so far it’s required few people to paint the backgrounds, she’s been assisted by talented people when required; for example, episode 2 had many sceneries handled by Yuji Kaneko’s Aoshashin crew, whose traditional art on titles like the original Little Witch Academia is obviously very compatible with this show. I would also highlight episode 3, the only one so far that wasn’t directly under Akagi’s supervision. It instead was in the hands of Takahiro Koyama, an ex-JC Staff artist who recently moved to the small company Studio Homare, mostly entrusted with support work. He was assisted by some members of Land of the Lustrous core team, such as the young Eri Ando whose beautiful student work you can take a look at here. Quite a lot of names to keep track of for something that mostly stays in the hands of a small team, but background artists receive so little attention beyond certain art directors that it felt worthwhile to start like this.

Children of the Whales

Children of the Whales might have the most immediately striking style out of all background art this season. Its fairytale world is brought to life in appropriate fashion, with a boldly textured coat of paint that makes it feel like you’re flipping through an illustration book. This approach feels conceptually fitting and is very conducive to isolated beautiful shots, plus it tends to work very well when depicting the rugged structures that this curious society has built. On the other hand, the obvious drawback is that it often creates a gap too large between character art and backgrounds; the clean drawings overlayed over the heavily textured surroundings can be a bit awkward at points, but I understand that applying the same approach to the characters wasn’t an option, and all things considered I feel like the show works more often than not — I wouldn’t have included it here otherwise!

Who’s in charge of this very unique work then? It’s not JC Staff’s own art department, who, while talented, tend to focus on photorealistic drawings that wouldn’t really fit this production. Instead we have Moonflower‘s artists led by the studio’s CEO Toshiharu Mizutani. He gained attention recently as Yuri on ICE‘s art director (although in that case he was assisted by the brilliant Seiki Tamura — more on him later), but that was far from his first notable job. AKIRA, Space Adventure Cobra (1982), GOLGO 13, he was in charge of many iconic titles even before he started a studio of his own. Admittedly he feels like the kind of artist who heavily relies on directors with exceptional vision to truly give it his best, but considering production hierarchy that’s hardly unusual. Nowadays he commands Moonflower’s staff (12 total, 8 digital and 4 traditionally-focused) through projects like these, while he’s personally in a position to contribute to publications with popular artists and even give classes. Not bad!

You’ll rarely find a show where the aesthetic is woven into the core to this degree. URAHARA undoubtedly has issues when it comes to the execution, to the point that the impossibly messy storyboard made me bow out after a single episode. If you look past the clumsiness and obvious production constraints though, you find an incredibly cohesive and attractive framework. URAHARA draws its colorful and trendy spirit from the setting it’s inevitably tied to, depicting everything with the same fashionable, vivid flair. This doesn’t mean that it’s consistent when it comes to the techniques employed (far from that!), but rather that it all follows the same vision; from the colorful squiggly backgrounds with distorted layouts to the pastel color accessories, it all irradiates the same energy. Again we have a double art direction figure, with series director Amica Kubo — known for her indie work — as the conceptual artist and ultimate supervisor, while Seo-Gu Lee manages the hands-on background art work at studio SAKO. While it’s easy to see how a more robust team could have delivered much higher quality work based off this same set of ideas, I feel like the cohesion they achieved here is commendable. URAHARA is sometimes beautiful, but more than anything else it’s extremely, consistently URAHARA.

While I’ve been celebrating this season’s new offerings, the truth is that plenty of currently airing sequels have featured equally impressive work. Out of all of them, I’d like to at least highlight March Comes in Like a Lion‘s second season. The series didn’t reinvent itself between seasons, and it definitely didn’t need to. We’re dealing with another heavily textured work here, though this one avoids Children of the Whales‘ pitfalls with its restraint. Warmth is the defining element of its world — often in contrast with the inner turmoils of its protagonist — which is at its most idiosyncratic when the drawings get loose, rough in a pleasant manner.

This main responsible behind this world is none other than Anime Kobo Basara’s Seiki Tamura — an important figure on his own right thanks to titles like Sayo Yamamoto’s works, but also because of the influence he’s had over Kyoto Animation as a whole; he collaborated with the studio ever since it started producing projects of its own, serving as art director on the likes of Haruhi and K-ON!, so his style had a strong influence on their then budding art department. Nowadays Anime Kobo Basara remains one of the few companies they collaborate with, which should speak of their skill! It’s also worth noting that the relatively obscure animation prodigy Yasuhiro Nakura is handling the design work, as well as supervising key layouts through the entire show, animating some important scenes, and making the ending sequences all by himself while he’s at it. His impact on the show’s overall aesthetic can’t be understated.

These aren’t all there is to this season, of course. On the sequel front I would also highlight Osomatsu‘s return, as that’s another show with beautiful work by Seiki Tamura (although heavy outsourcing often stops it from shining). Blood Blockade Battlefront & Beyond is a curious case, as a sequel that’s lost its most inventive creators but still wants to put up a fight; on an art direction front this means they lost the exceptional Shinji Kimura, arguably the industry’s best artist when it comes to urban settings, and made the new team led by Junichi Higashi try and capture a similar feel. And despite the obvious draftsmanship downgrade you would expect, the series’ eccentric world still manages to catch the eye. Hozuki no Reitetsu’s classical depiction of hell hides some gems as well, despite yet another full staff renewal. And if we lower the bar a bit, even more modest attempts like Ancient Magus Bride, Blend-S and Black Clover have had isolated striking work. This is a very strong season on the whole, and that also shows in this very particular regard!

I thought you would include Shoujo Shuumatsu Ryokou for sure. I agree with all the choices otherwise. A great read as usual.

Despite loving the show I actually think Girls’ Last Tour’s backgrounds are… pretty poor honestly, the weak link alongside the composite. It’s a cool world conceptually but in that regard I’m not happy how the anime’s depicting it.

Wow, that’s interesting. I love the background designs of that show to death. Could you elaborate more on that? Is it how the anime approach differently from the manga? Or how they conceive the world visually?

Straight up forgettable art, it isn’t a conceptual issue. Save for a few exceptions (like one of the first pieces of teaser art), the backgrounds are boring renditions of neat ideas. I think it’d have benefited from a less realistic approach, more similar to Tsukumizu’s structures in the ending.