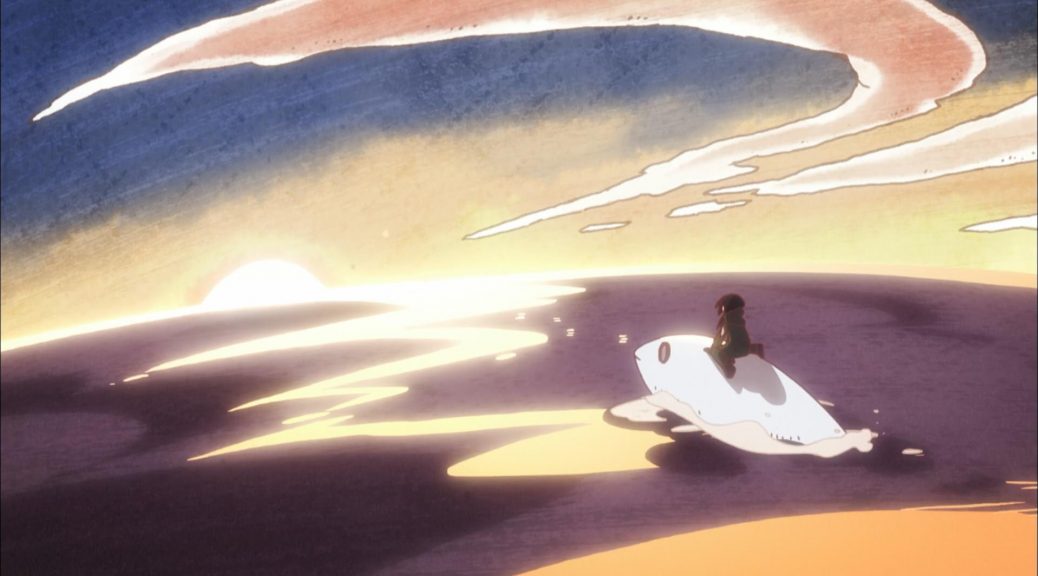 It’s been a while since our last entry in this series about the most promising fresh creators in the anime industry, but to make up for it we return with a very timely and interesting choice: Mai Toda, currently serving as the character designer and chief animation director on the lovely Girls’ Last Tour. Quite the talent as an effects animator and one of the strongest designers when it comes to modern cartoony work!

While Mai Toda isn’t as precocious as many of the artists we’ve been using this platform to highlight, she fits like a glove to the premise of noteworthy up-and-coming talents. That’s because, despite already having been around for slightly over a decade, it wasn’t until the second half of that period that she found her true calling and began standing out.

To find Toda’s actual origins we have to look back to the mid to late 00s, when she joined the industry through studio Telecom. After her formative period she acted as a freelance animator, as it tends to happen to young artists in this industry. That took her to all sorts of productions, with a bit of a focus on JC Staff and Pierrot productions; she became a very regular presence in Naruto Shippuden, and took her first steps as animation director in JC series like Heaven’s Memo Pad and Zero no Tsukaima F after all. It wouldn’t take long for her to land her first roles as character designer and chief supervisor – the position in which she’s blossomed into one of the industry’s most promising talents – but I would point elsewhere to find her the show where she made a name for herself.

As a fan it’s easy to only take major landmarks as the points of reference for an artist’s career, but often the meaningful changes happen more discreetly. In this case the turning point was the mostly forgotten Code Breaker anime, which had quite the impact on a certain crew of animators. The project, led by Yasuhiro Irie of FMA Brotherhood and Scorching Ping Pong Girls fame, was the first TV series entirely produced by Kinema Citrus, as well as Toda’s first major collaboration with them (after having contributed to the lavishly animated yet unfortunate Trails in the Sky OVAs). The show turned out to be a fitting canvas for a new generation of digital artists with a penchant for effects animation, who managed to stand out over Irie’s more proven acquaintances – the likes of ripa, majiro, and of course Toda herself regularly contributed to the impressive FX spectacle. Despite sharing many stylization quirks with the predominant webgen styles, their slightly more intricate drawings were more in line with the character art, avoiding the usual pitfall of effects that don’t feel like they belong in the same universe as the person who cast them. If 2DFX is something that tickles your fancy, it’s well worth checking out their work.

That crew soon proved that this wasn’t their only register, as they became Kinema Citrus’ main force in much more down to Earth, delightfully expressive shows like Yuyushiki and Barakamon. This industry isn’t fond of stability however, so the studio’s cofounder Yuichiro Matsuka decided to embark on an adventure of his own to create 3hz. And the reason that’s relevant to this story is because in the process he took almost all of Kinema’s interesting young animators with him, which did of course include Toda; hence why she worked on Celestial Method, Dimension W, and even the publications of the 0.3Hz circle related to the studio. Chances are that her link with those creators will never be broken, but for some unstated reason, she decided not to settle there permanently like her companions. Instead she started leaning closer to the freelancing life again, until she found a new main post: White Fox.

And that doesn’t just bring us to present time, it also finally offers me a chance to talk about her style after catching up with that hectic career. Her new studio struck gold last year when they allowed her to serve as character designer and chief animation director of Matoi the Sacred Slayer – a show that otherwise wouldn’t have been all that memorable, but that was elevated by her touch. Toda’s genius simplicity lies in creating easily malleable designs that don’t require many lines to feel well-defined, and her understanding of loose drawings to give her animation pleasant viscosity. It’s not as if her rounded smears are some sort of breakthrough, but her strength is in the usage rather than the inventiveness. Quite often you’ll see fans complaining about out-of-context smeary frames (awful practice as far as I’m concerned, but that’s a debate for another day), but Toda’s joyful intent is so blatant in all her drawings that I’ve yet to see this happen with her work.

Although funny faces aren’t her forte despite otherwise shaping up to be a cartoony master, her characters’ exaggerated pantomime is expressive enough by itself, and she adds in some extra nuance you wouldn’t expect. For example, her current show Girls’ Last Tour has immensely tangible drawings, which is fairly important when so much focus is put on the very physical relationship the main characters have. I find it particularly noteworthy that a series that is aesthetically opposed to realism manages to nail tactility much better than projects obsessed with photorealistic appearances. The simple and round designs suit Toda to begin with so it’s been no surprise to see her very natural adaptation of their appeal, but it’s the neat details like this that Toda keeps adding to her repertoire that make her career so exciting.

It’s also worth noting that she’s a very fast worker – not a skill to underestimate in a space where deadlines are the inescapable enemy. Even in the projects where she acts as chief animation director, she keeps finding the time to do hands-on work throughout the series; in Matoi’s case she drew key animation for half the episodes, and she seems to be heading a similar path when it comes to Girls’ Last Tour. So if this has gotten you interested in her output, rest assured – not only is she talented, you’ll have a lot of work to catch up with!

Good article for a talented girl! 🙂
About her work on Matoi and with W-Fox, thanks to her best friend Masayuki Sakoi. He mentions how she started working on the show in this interview: https://nizista.com/views/article2?id=2b5d45d0c5dc11e68a752954c6538706

White Fox is honestly very lucky to have that link, since under normal circumstances it would have made much more sense for her to focus on 3hz work. I’m perfectly fine with this outcome though, since 3hz already has plenty of animation talent of their own. With some important White Fox-related people being very busy elsewhere (Ikariya!) they need someone like her.

White Fox has lost a lot of animators since 2016 including historical members like Satoshi Mori & Taro Ikegami. I hope Toda will not stop working with the studio after Girls’ Last Tour, there are no more talented people. :'(