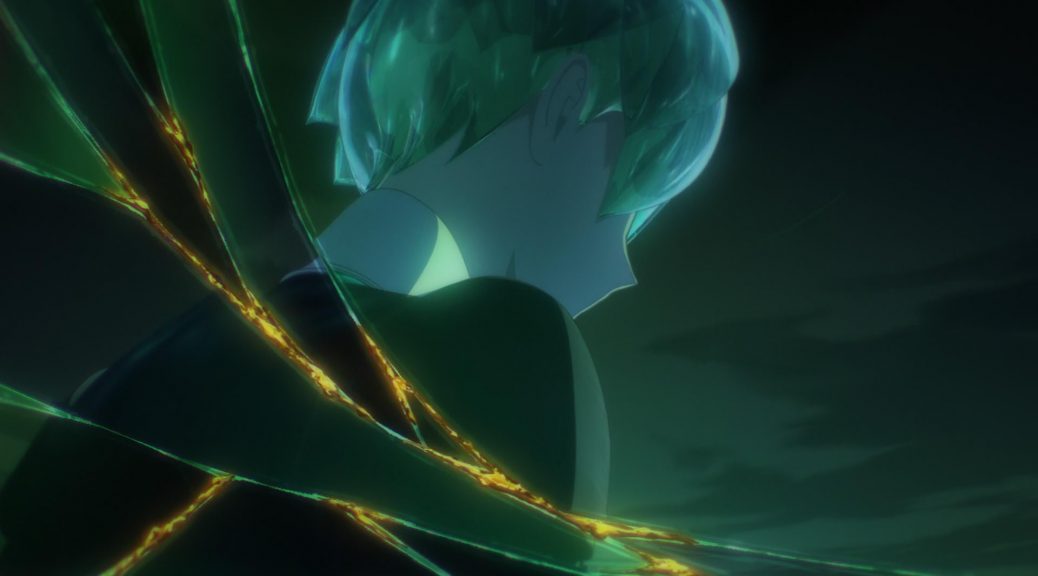 Land of the Lustrous is approaching its ending, and yet it still finds a myriad of ways to keep on surprising us this late in the game. New registers and tones it also excels at, new ways to combine traditional and digital craft, new directors to share their vision. This is a truly special show, so don’t hesitate and read more to find out about its secrets.

─ Right as the show started, series director Takahiko Kyougoku claimed that although he considered the sense of ambiguity one of the greatest assets of Land of the Lustrous, he was taking into account how TV anime is consumed and thus wanted to make this adaptation easier to parse. What this vision entailed is clear now: the anime staff aren’t exactly conjuring feelings out of nowhere, but rather acting as a very elegant megaphone that amplifies Haruko Ichikawa’s vague musings. This means that episodes like this end up being tenser than they originally were, while the next one also manages to be even funnier than the already outrageous source material. A little bit of the whimsical magic is gone, but it also ends up being more impactful as a result. Two different flavors despite using the exact same ingredients, which makes it hard for me not to appreciate both takes.

─ This isn’t much of a revelation after so many episodes, but Kenji Mutou is the most brilliant storyboarder in this show. His striking imagery always nails the mood better than anyone else’s. Reflecting on Dia’s missing eyes, the shot emphasizing distance where they tell Bort “From afar, I see how much you mean to me” is so good it’s almost repulsive. Even Mutou’s more personal mannerisms, like the symmetrical compositions and mirroring, feel right at home rather than come across as self-serving quirks. He’s not just a talented director – he’s understood this work and managed to make it his own.

─ One interesting detail that Mutou unexpectedly yet successfully managed to bring attention to is Bort’s hair. Silhouettes are quite important when it comes to character design, and a hairstyle as majestic as theirs is a sure way to make Bort immediately recognizable over all the other gems. It’s no surprise then that it’s the hair that immediately pops to mind when Dia is thinking of their sibling in a time of need. And that’s not all, since their striking figure can be used in many ways in the right hands; as a neat swipe transition, to drive away a new teammate like the hedgerock they are, but also to shield them as Bort can’t hold back their usual overbearing lectures. Mutou nailed the character’s charm like no one else, and the key was apparently in their ridiculous hair.

─ Moving onto other diamonds we find poor Dia, who landed in a horror movie. The range of this series – further accentuated by the following episodes – is astonishing, and Dia happened to suffer the most nerve-wracking moments in the entire show. The quiet chase is particularly breathtaking, holding onto that tension via an incredible uninterrupted shot… or is it? If you pay attention you’ll see that there’s multiple potential cuts in there, even if the result appears seamless. The nature of this production removes many limitations, but since the people storyboarding it are way too used to working for standard 2D projects, you’ll still see them cutting corners here and there. It’s hard to unlearn how to make anime!

─ And that takes us to the final point regarding this episode: that animation was pretty sweet, uh? In fact, according to the internet at large, it was too good to have existed as 2D work instead. The sentiment behind that means well, but the statement is still wrong. The way many scenes in Land of the Lustrous are constructed is informed by the fact that it’s a mainly CG production, there’s no denying that; plenty of the big setpieces, where the camera moves all over the place to highlight scale and dynamism, clearly were born out of the knowledge that they could more easily alter perspectives. That said, and much like episode #8, the spectacular moments in this case were first hand-drawn. Another top animator with theatrical level skills – Naoki Kobayashi in this case, keeping the Naruto lineage from Norio Matsumoto’s previous assistance – drew it as very strict guidelines for the 3D animators. On top of that, closeups keep being 2D terrain, and experts effects animator Kazunori Ozawa also contributed plenty of straight up hand drawn effects to the episode. This show has of course benefited from its 3D backbone, which has a tangible effect on how many scenes were visualized, but keep in mind that the excellent result relies a lot on the work of 2D artists too. The people making the show are convinced that the movement and expression in particular need traditional animators, so it’s weird to see the fandom so convinced that this is all the work of Orange’s talented 3D team. And while it’s true that all this wouldn’t even be attempted in a standard 2D production, keep in mind that this is anything but the norm! The staff can consider themselves lucky that for once they’ve been granted an environment where this thoroughness is allowed. To sum things up: yes this is an incredible production, but the excellence is more nuanced that it’s being portrayed as. Going from assuming that CG is inherently sinful to embracing it as your savior isn’t all that much better.

─ Yoko Kuno has finally had her debut as episode director, after training as assistant throughout the whole series. While I’d love for her to receive the chance to storyboard as well, she did an excellent job at bringing to life the most striking moments that Kotaro Tamura had boarded. Or to be more precise, the concepts that mangaka Haruko Ichikawa came up with and concept artist Yohichi painted. Kuno took those ideas and made them work as sequences rather than isolated vignettes, illustrating Phos’ psyche in memorable fashion all while keeping big chunks of the episode genuinely hilarious. The gems all follow Kongo in an almost dogmatic way, so bringing oneself to doubt their sensei is a literal world-shattering event. Not half-bad work coming from a newbie! Between this and the high praise her manga is receiving, it feels like we chose the perfect time to track the career of this young anime star. And since chances are that this will be her final contribution to the show, enjoy this cute piece of art she drew to promote its bluray release, relating to the contents of her debut as director.

─ Alexandrite unleashing her red, nerdy rage feels like a scene tailor-made for this adaptation and its carefully depicted gem hair. In a way I’m sad that this wasn’t set at night, where they could have gone crazier with the lighting.

─ A couple of minor nitpicks about the production for a change. The reason why almost every single closeup, especially those where two elements interact, have been hand drawn is that their 3D work is often very bad at simulating contact. Mind you, this is the downfall of many traditionally crafted anime too, but it’s even more blatant in this case. And while we’re at it: the photorealistic Shiros feel terribly out-of-place in contrast with the painted backgrounds and even the gems themselves. Though I suppose it’s alright, since they’re still absurdly adorable. I’m not as convinced about the official merch that encourages you to store things up their bum, however.

─ The background art in the last few episodes has been even more on-point than usual, partly thanks to the strong assistance by Yuji Kaneko’s Aoshashin studio who have been painting most of it. The core staff are very talented themselves, but they also know whom to rely on. Incidentally, episode 11 was the debut as art director of the young Emi Sato, whom I mentioned a while back – again, she’s quite good! The producers were glad that this episode allowed so much fresh talent to flourish.

Quite surprised you haven’t mentioned that the Dia chase scene appeared as if it was taken right out of a horror game.
It feels like some of the longer shots tend to have video game influence (not that it’s bad, though!).

I know what you mean and to some degree I agree, but that almost felt like giving too much credit to horror games, in the sense that they’re rarely *that* good at holding tension.

I don’t think the camerawork in that scene has much similarity to horror game camerawork. The camera in horror games tends to be placed above or behind the player character, to allow the player to get a good sense of how to move the character within the environment, whereas the camera in episode 10 here is mostly placed below Dia, to emphasize the looming presence of the Lunarian. Moreover, the kind of camerawork most associated with classic survival horror games is a fixed camera which rotates from a defined point, not the dynamic camera seen here.

“If you pay attention you’ll see that there’s multiple potential cuts in there, even if the result appears seamless.” I noticed all the hidden cuts, it’s exactly how you would do it in a live action production, I guess. It’s interesting to think that they did it with this mindset. And what you think about the Jurassic Park homage? My nitpicks are that they could have put a lot more of background details and foreshadowing in all episodes, like sculpted pieces for Padraschadasdahasdhahdada in Rutile’s office. This new gem came out of thin air. On episode 10 they cared too… Read more »

Wow, be respectful to Parappatherapper, the beautiful gem with more holes than Swiss cheese. I think you raise a good point. Episode 10 was very invested on that feeling of tension and created those long chases sequences out of essentially a couple of pages in the manga – hence why personal preferences leaked into it and we got Fluffy Jurassic Park. That made it more thrilling, but also got them to skim over details like that. In the end I still think it’s worth it, though. This isn’t going to be much of a standard end so “wise gem suddenly… Read more »

Having watched the last episode and having read the manga, yeah, the anime was good however they could have adapted a little bit better. Maybe because they had too much to handle with the 3D and couldn’t give more attention to the script, it’s understandably, but even so I give a 8.5 for the adaption. For the second season I don’t care, not to see the rest of the story, I just want to see how this team can improve with the experience they gained with this first try. They did a good job with the art and Phos’s suffering… Read more »

Ep 11 is genuinely one of the episodes that made me smile and watch the episode over and over again. This along with Phos ice breaking hijinks over a jazzy soundtrack episode.

Thankyou for highlighting the fantastic work done 2D animators on this project.

Can you guys get info on how the 2013 trailer was animated? I’m really interested to know.