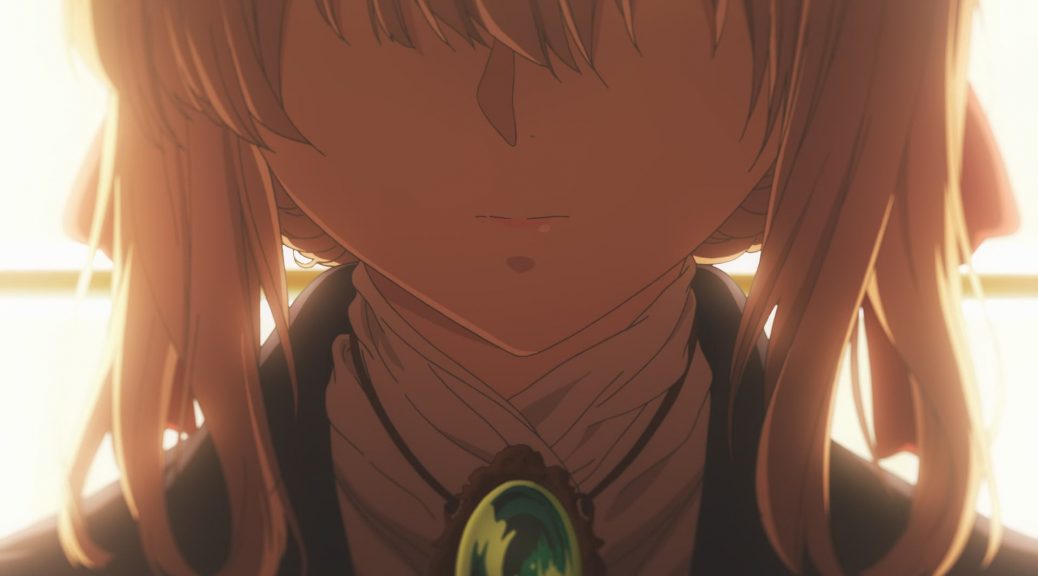 Once again a Kyoto Animation veteran showed up to handle a very pleasant chapter in the adventures of Violet Evergarden. This is the right moment to inspect not just how he brilliantly constructs anime, but also how the studio as a whole approaches the production process – things are changing!

StoryboardStoryboard (絵コンテ, ekonte): The blueprints of animation. A series of usually simple drawings serving as anime's visual script, drawn on special sheets with fields for the animation cut number, notes for the staff and the matching lines of dialogue. More, Episode DirectionEpisode Direction (演出, enshutsu): A creative but also coordinative task, as it entails supervising the many departments and artists involved in the production of an episode – approving animation layouts alongside the Animation Director, overseeing the work of the photography team, the art department, CG staff... The role also exists in movies, refering to the individuals similarly in charge of segments of the film.: Ichirou Miyoshi (Yoshiji Kigami)
Animation DirectionAnimation Direction (作画監督, sakuga kantoku): The artists supervising the quality and consistency of the animation itself. They might correct cuts that deviate from the designs too much if they see it fit, but their job is mostly to ensure the motion is up to par while not looking too rough. Plenty of specialized Animation Direction roles exist – mecha, effects, creatures, all focused in one particular recurring element.: Yuki Tsunoda

─ This show might never come together as a whole package, but over the last few weeks its individual vignettes have been wonderful in isolation. Simple as it may be, I’m quite fond of this episode; a one-sided love that ends up being a mutually beneficial, healthy meeting is something I just find very pleasant. The main culprit this time around is of course storyboarder and episode director Yoshiji Kigami, who appeared out of nowhere to protect this excellent streak of directors. Now this was surprising as back in December, Kigami wrote in the studio’s blog that over the last few months he had left directorial tasks behind to focus on Key AnimationKey Animation (原画, genga): These artists draw the pivotal moments within the animation, basically defining the motion without actually completing the cut. The anime industry is known for allowing these individual artists lots of room to express their own style. – something he does every now and then, depending on their needs – which led to everyone assuming he wouldn’t be handling any episode of this series. But as it turns out, Violet Evergarden’s ridiculously solid schedule means that at that point he’d long since finished this episode already. This sure is a contrast with most shows cutting it very close with the broadcast.

─ You’ll often see critics and fans alike praise Kigami’s very articulate storyboards, which are essentially rough genga on their own, but I would argue that his understanding of animation goes beyond that. Look no further than the introductory sequence, for example: the transitions aren’t just nice flair, he guides the viewer’s eye in a perfectly natural way – open door, close door, walk outside – while conveying information about multiple locations. The episode is full of quietly brilliant construction like that, such as Leon and Violet’s first meeting, where the camera emulates his disinterested eye until he glances at her and is immediately captivated. I don’t mean to say that it’s wrong to introduce Kigami as “that top KyoAni animator who worked on the likes of Akira” or “the director with key animation-like storyboards,” but I believe that after many decades of making anime his grasp on the medium is complete. While he doesn’t seem to have the conceptual vision to lead full-length narrative works, you’d be hard pressed to find anyone in the whole industry better suited to handle any given episode. 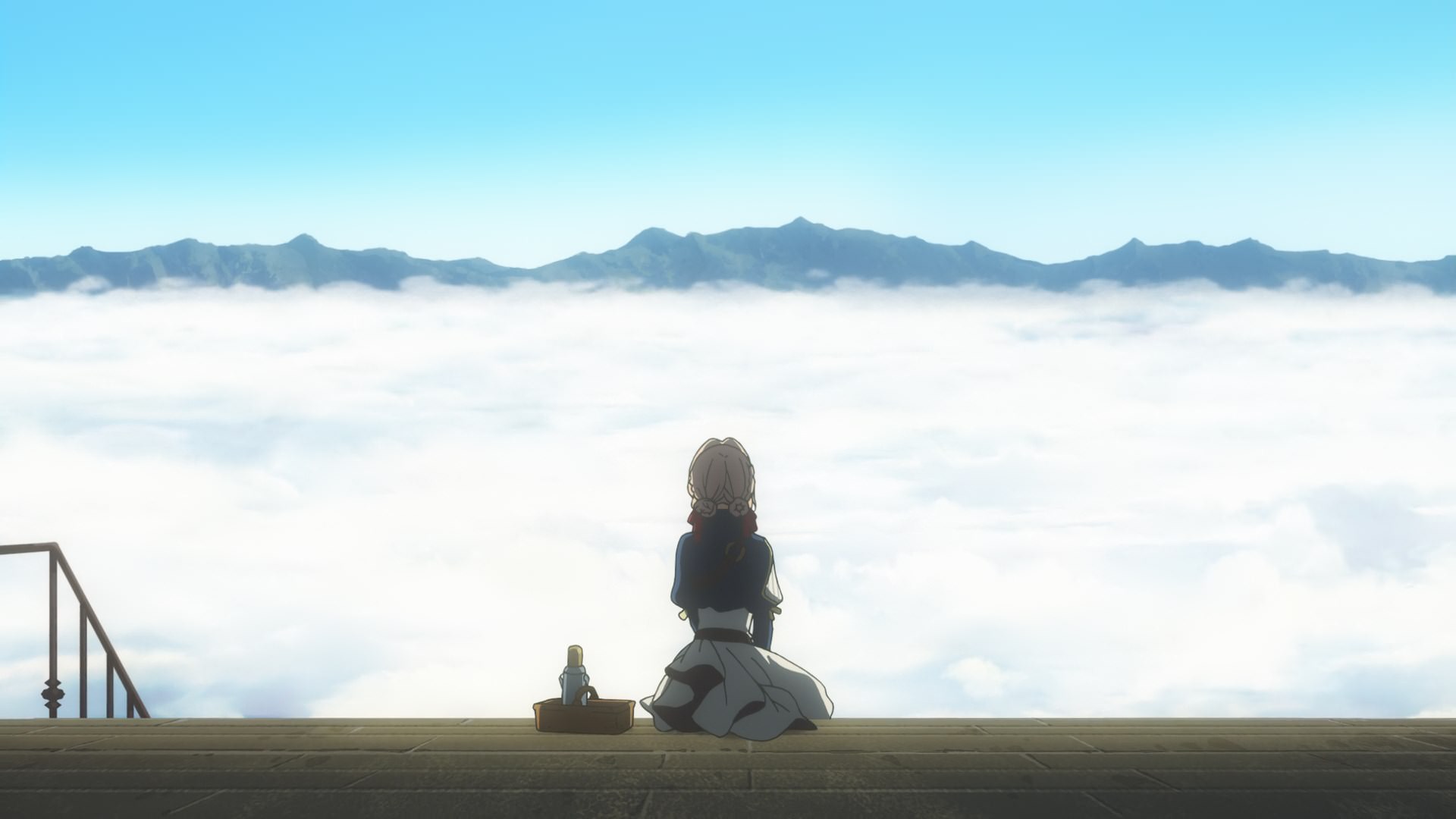 ─ Beyond the nice episode though, I feel like it’s important to talk about how the studio is approaching this production, since it’s a surprising departure from the norm. Kyoto Animation’s standard behavior is to have right about everyone tackle every single project. Key staff might skip the projects surrounding their focus of attention, but for the most part you see all their creators appear in every show, which further reinforces the cohesive feel of their output. When it comes to Violet Evergarden however, that’s clearly not the case; so far it’s featured a very solid directorial roster, but the Osaka branch of the studio is entirely missing, half the supervisors are staying away from the show, and the lineup of animators is bizarrely limited. I don’t want to say that this was a low priority for the studio because that’s straight up a lie, since the creators involved are among their most brilliant, and I’d also be lying if I said the result of their work isn’t very impressive. While it has lost some steam, this is still undoubtedly one of their most impressive production efforts, which also means a feat for TV anime as a whole. But at the same time, it’s hard to imagine they couldn’t have achieved something even more astonishing with the usual crew. While the actual production time they had was longer than usual, they’re still making the same few artists appear on a biweekly rotation, rather than letting them focus on a couple of episodes. I’m torn between admiration of what they’ve achieved while handicapped and worry about a new production approach that could have a negative impact, if this is how they plan to work from now on.

─ I’d like to expand on that by talking about the management of anime production. I’ve called production assistants the silent heroes of the industry before and I feel like that’s well deserved; they run around ensuring everything gets done and delivered, get in touch with many departments and individual artists involved in an episode, and after that hectic experience is over they’re just given an episode further into the series and we’re back to the beginning. If you’ve seen Shirobako, think about Miyamori’s starting role, except with even more stress once removed from the embellishments of encouraging fiction. Things at Kyoto Animation aren’t quite the same: the role, called production manager instead, doesn’t really involve fetching materials from different places as their work is essentially 100% in-house. Since the production of consecutive episodes can happen within the same building, it’s not unusual to see a single assistant handle multiple episodes in a row, without the standard rotations we see elsewhere. That doesn’t mean their role doesn’t matter however, so all their projects still require 4~7 people running them. The studio has about 10 production assistants split among their different locations… and yet Violet Evergarden has been entirely managed by only two individuals, Yuka Nakagawa and Takahisa Fujita. Considering that every single anime they’ve made in recent times would have twice the assistants on it at this point already, this seems like an even clearer hint that they’ve split their resources in a way they hadn’t done before. 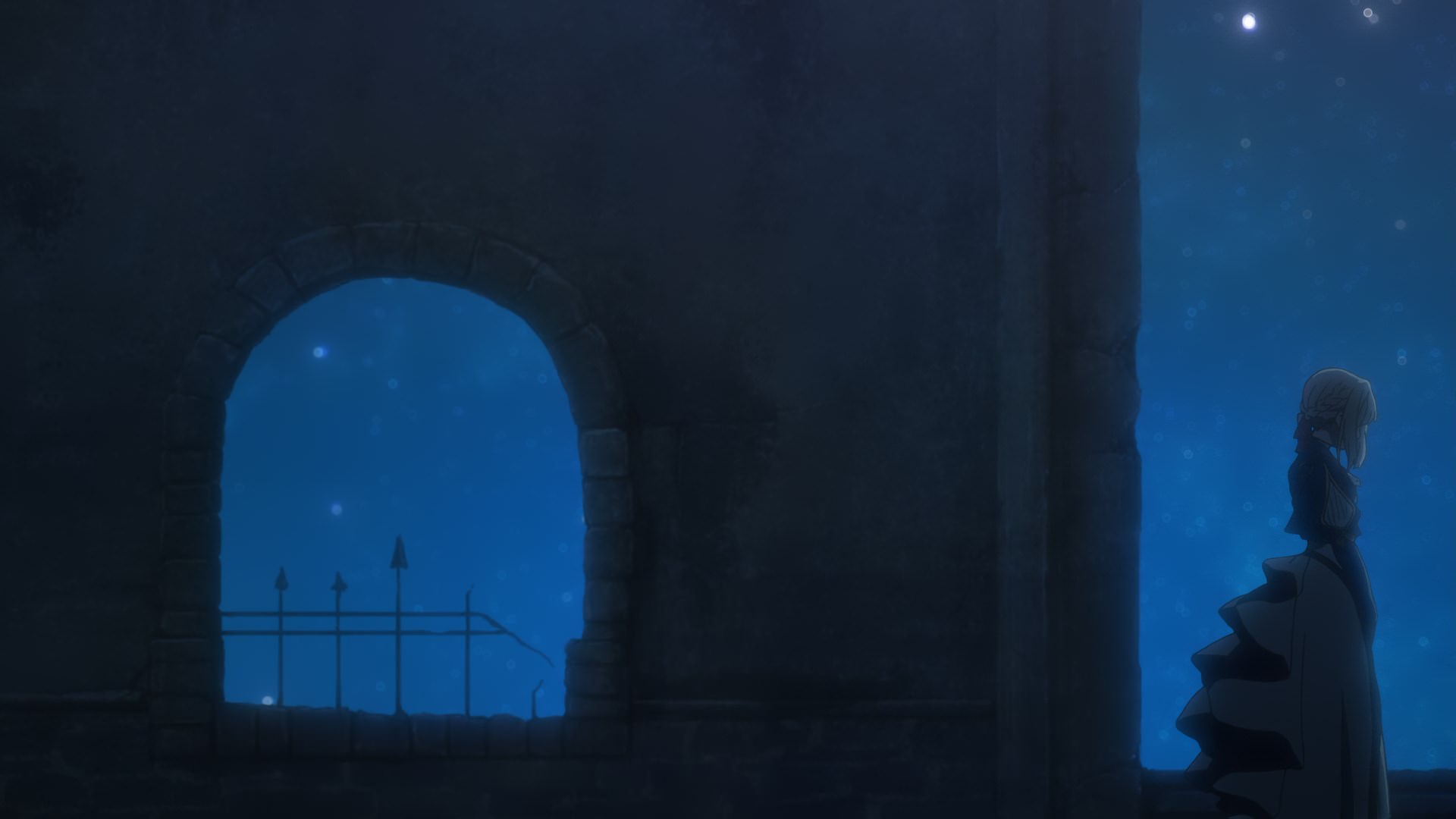 ─ If all that rambling was too unclear, let me put it in more straightforward terms: whether temporarily as they’re very busy or as a new way forward resulting of their recent expansion, Kyoto Animation is now acting like a multithreaded production company. Since they constantly reshuffle staff I wouldn’t expect them to act like the sub-studios seen at BONES or Sunrise, but in a way they seem to have gotten closer to that system. The clear benefit is that projects are less likely to be rushed if independent crews doesn’t have to worry about working on all of the studio’s output, while the equally obvious negative is that you’re splitting the talent pool. We’ll have to wait to consider future effects, but it’s definitely had an impact on Violet Evergarden.

─ What’s that impact exactly? Well, for example the fact that this was key animated by the same group of 5 who handled episode #4 a couple weeks ago, once again under Yuki Tsunoda’s supervision as animation director. I still believe she can’t fully keep up with the level of detail required in this series, which in this case mostly shows in the shots with background characters – those are usually given immense care, protecting the illusion that we’re only seeing one of the many stories in this world, but this episode can’t quite achieve the same effect. Even if she had enough time, another downside to having such a limited crew is that someone like Tsunoda whose artistic sensibilities don’t fit the project will end up handling more episodes than necessary. On the bright side, the team of animators she’s commanding is very good, so there are still some standout sequences. Kigami’s storyboards always delineate acting to an astounding degree, and that’s made even better when he’s paired with animators who can bring out the nuance and intensity of the feelings on display. With work like this, Nami Iwasaki has been gradually establishing herself as one of the studio’s top animators.

but I have to ask, can this new approach lead to some positive effects?

even if some project will suffer slightly because of the presence of an animator who is Unfortunately not the best man for the job, can’t there be some project that will benefit from the opposite occurrence?

Oh, definitely. Beyond personal aptitude (which is honestly not much of an issue, Tsunoda’s work has just been standing out because the standards in that particular regard are incredibly high otherwise), there’s benefits for the studio as a whole. For many years they tackled productions one at a time, leaving aside movie projects and pre-production. That meant that the shows that aired at the end of their TV runs had some staff fatigue, since the whole studio had been working on other stuff before getting to that point. It wasn’t a tragedy since their management in this regard is good,… Read more »