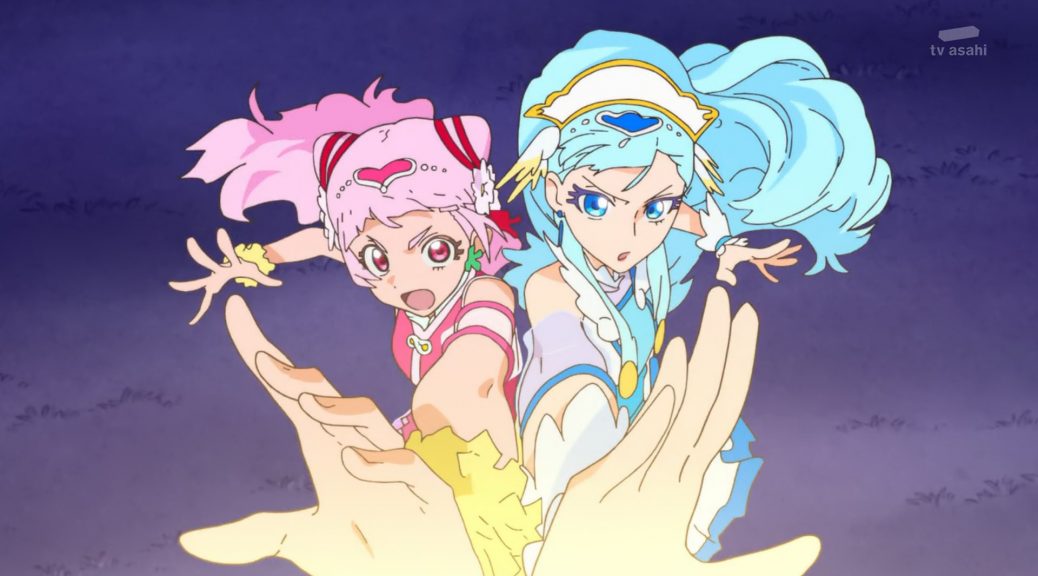 Hugtto! Precure #16 was a historical high not just for the franchise, but for magical girl anime and Toei Animation altogether. Though we’ve already covered the main culprit behind it, a look at the episode itself and the whole team who made it possible was well-deserved. Anime doesn’t get much better than this!

StoryboardStoryboard (絵コンテ, ekonte): The blueprints of animation. A series of usually simple drawings serving as anime's visual script, drawn on special sheets with fields for the animation cut number, notes for the staff and the matching lines of dialogue. More, Animation DirectionAnimation Direction (作画監督, sakuga kantoku): The artists supervising the quality and consistency of the animation itself. They might correct cuts that deviate from the designs too much if they see it fit, but their job is mostly to ensure the motion is up to par while not looking too rough. Plenty of specialized Animation Direction roles exist – mecha, effects, creatures, all focused in one particular recurring element.: Koudai Watanabe
Episode DirectionEpisode Direction (演出, enshutsu): A creative but also coordinative task, as it entails supervising the many departments and artists involved in the production of an episode – approving animation layouts alongside the Animation Director, overseeing the work of the photography team, the art department, CG staff... The role also exists in movies, refering to the individuals similarly in charge of segments of the film.: Kouji Kawasaki

Key AnimationKey Animation (原画, genga): These artists draw the pivotal moments within the animation, basically defining the motion without actually completing the cut. The anime industry is known for allowing these individual artists lots of room to express their own style.: Koudai Watanabe

─ So, was this special because it marks the first time in exactly 700 episodes of Precure that the same artist has acted as storyboarder and animation director? Is it because it’s led by someone who’s worthy of captaining a very promising generation at Toei? Maybe it’s the fact that, rather than timidly supporting him, the rest of the staff stepped up to the plate and knocked it out of the park? Or could it be that even if you magically separated this episode from its production context, it would still be an all-time high in magical girl anime? The answer is of course all of that and then some, but since a quick summary doesn’t do it justice, I’ll go through many scenes in the episode to get across just how outstanding Hugtto! #16 was.

─ Right off the bat we see Koudai Watanabe‘s presence dominating the episode entirely, which is a constant throughout the episode; short-hand designs that feel as Yuki Hayashi-inspired as ever, Yutaka Tsuchida-flavored comedy with an audience of its own, and of course his own brand all over the visuals, with his distinct take on the designs and joyful animation. Even beautiful the flat shots on the shade are quickly becoming a recognizable quirk of his, as seen in the more serious parts of this episode. If you want a much lengthier look at Watanabe’s style and his propulsive ascension in the anime industry, we just put out the perfect post for you.

─ Right about every cut stands out in some way or the other, be it because of the diverse amusing drawings or because of the complex layouts. The scene on the rooftop serves as a nice teaser – poignant poking at their weaknesses underlined by the visuals, and immensely expressive acting even in the far shots, as depicted by one of the sakugaSakuga (作画): Technically drawing pictures but more specifically animation. Western fans have long since appropriated the word to refer to instances of particularly good animation, in the same way that a subset of Japanese fans do. Pretty integral to our sites' brand. stars this time around. The first sequence that feels truly special however is Ruru’s hesitance to sell out the enemies that she’s grown so fond of; her inner conflict is hardly unique, and the usage of shadow to represent a literal dark side is also as basic as it comes, but the immense strength of the scene is on the execution rather than the base concept. Watanabe put together a sequence of nothing but striking shots, and Ruru’s palpable reluctance with her subtle foot movement when darkness is about to swallow her is a moment that will stick with me.

─ As Ruru seemingly makes up her mind and chooses the path of betrayal, the next scene follows it all up with the same visual theme and eye-catching layouts. Beyond that, and the undeniably expressive animation, I’d like to highlight the role of episode director Kouji Kawasaki. Watanabe and his troupe of young animation stars are getting all the praise they deserve, but a few Toei members have asked fans to thank the person who put together everyone’s wonderful work as well, since he did his best and his input was very valuable. I believe Kawasaki might have struggled a bit to earn this spot, as he’s been stuck training as assistant ever since 2013, but this could very well be the project where he fully consolidates himself as a director. He briefly shared his thoughts about the episode, where he noted that one of his goals was guiding the gaze on these scenes. As far as I’m concerned, he did an excellent job.

─ After a fun intermission with a tint of sadness, we’re fully in the melancholy zone. At the same time, we’re also back into Masami Mori‘s territory, as he had already animated the fantastic scenes on the rooftop and in the classroom. Mori is yet another prodigy we’ve had the pleasure to cover, and his work in this episode makes it clear why he attracts so much attention. Watanabe regularly entrusts him with the most important moments to begin with, but this scene proves that his hand alone can elevate milder events. Those economical yet very expressive far shots, his beautiful forms accentuated by the water, even personal quirks like the thin limbs he tends to give to this show’s designs – it all comes together in very memorable fashion through his personality alone. As someone who used to get requested by all the high-profile sakugaSakuga (作画): Technically drawing pictures but more specifically animation. Western fans have long since appropriated the word to refer to instances of particularly good animation, in the same way that a subset of Japanese fans do. Pretty integral to our sites' brand. festivals in the industry, his current full commitment to Precure is honestly a miracle that would have never been possible without Watanabe. Asking for him to stay in this project at this point would be outright greedy, but as a big fan of both, I definitely wouldn’t complain.

─ The episode continues with more the same in the best of ways: evocative shots capturing very precise moods and strong layoutsLayouts (レイアウト): The drawings where animation is actually born; they expand the usually simple visual ideas from the storyboard into the actual skeleton of animation, detailing both the work of the key animator and the background artists. that get across how imposing their foes can be. The action arrives with a bang by the hand of Shunsuke Okubo, whose second contribution to the episode is a long stretch after the commercial break. Okubo is another noteworthy youngster currently being mentored by Watanabe, having earned his full trust at this point; not all his pupils showed up for the episode – Takumi Yamamoto’s absence is very conspicuous and seems to indicate he has an important role later down the lines – but the ones who did show up did an exceptional job without a doubt, as proven by Okubo handling close to 3 minutes of animation that were so good from the get-go that they needed no corrections. Though the action cuts are impressive, I think it’s Homare’s desperation that left the biggest impact.

─ Okubo’s work is followed up by arguably the star guest: Itsuki “miso” Tsuchigami, whose presence we likely owe to his friend Mori. His work might be the single most impressive action sequence in the whole episode, as it combines many of the positive aspects we find throughout the episode; Watanabe’s StoryboardStoryboard (絵コンテ, ekonte): The blueprints of animation. A series of usually simple drawings serving as anime's visual script, drawn on special sheets with fields for the animation cut number, notes for the staff and the matching lines of dialogue. More from it is excellent to boot, showing that battlefield depth he inherited from Yuta Tanaka in the background animation shot that brings the helpless bystanders to the foreground, but even the composite crew gets to literally shine with the beautiful use of sunlight effects. And of course, miso‘s digital animation is as impressive as ever, featuring some very dynamic poses and loose art that feels gallant nonetheless. It’s no surprise that Watanabe himself singled it out as one of the coolest moments!

─ Homare’s desperation, highlighted by director Kawasaki’s usage of depth of field, pushes Lulu to the breaking point and she decides to go help her friends. Homare’s arc has been focused on her grasping her goals, in a very physical sense here, leading to her transformation. As much as I enjoy stock footage, it’s a bit of a shame that they relied on it in this occasion, since it breaks the otherwise perfect flow and actually feels like a downgrade from the episode’s visual charm. The simply kickass action, presumably animated by Watanabe himself, leads to an equally satisfying character closure – an obvious callback to the beginning of the conflict under the rain, which allows their hands to finally join.

─ And so we get a happy end where friendship triumphs once more… or we would if this was a standard magical girl series for kids. The final scene serves as a reminder that it’s not just the unusually strong production that makes Hugtto! stand out from its peers, but also its very deliberate ruthlessness. Ace animator Mori, clocking over 4 minutes of animation by the end of this episode, returns one last time to depict Ruru’s sacrifice to save her friend from a final surprise attack. Though he’s an artist with wide range who could have easily taken a more exaggerated approach, Mori turned up the realism more than ever to believably depict her body going limp, a final lifeless bounce on the floor, and Hana’s restrained but painful shudder. Beyond his own work, Kawasaki once again enhanced the scene with the agonizing robotic POV shot before she passes out. This is nightmare fuel for any parents watching the series, let alone the kids that make up for most of Precure‘s audience.

─ An exceptional episode comes to an end like that, in an appropriately unusual way. The previous 699 episodes of Precure weren’t produced in this fashion to begin with, very few can live up to this thoroughly excellent craft, and perhaps none marry it all with the thematic core so flawlessly. As much as I’m a fan of the franchise and this series in particular, you shouldn’t expect episodes like this on the regular. Perhaps they won’t come again. But since I knew something very big was brewing, I’ve been very glad to be able to put together 3 different posts that show a very different side of Toei than it’s usually discussed online – 4 if you count the chronicle of their staff’s struggle to adapt to the studio clumsily trying to help them, since truth to be told, some of the people who complained the most were working on these episodes. I hope you enjoyed the coverage!

An acquaintance said that he counted the episodes and this one can’t be the 700th. Is this really right? Which episodes are being considered?