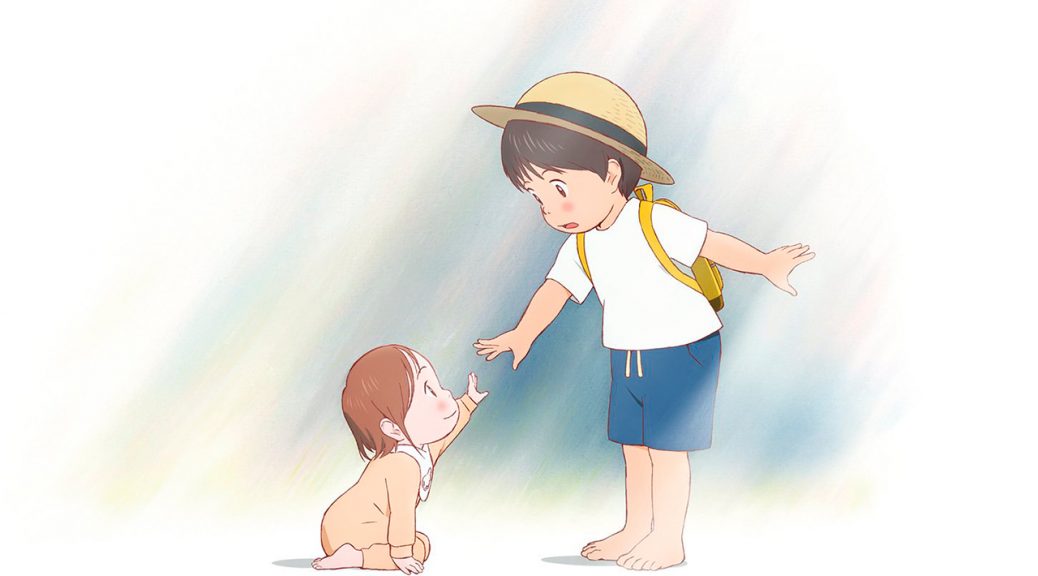 Mamoru Hosoda’s new movie Mirai no Mirai / Mirai of the Future has screened at the Annecy International Film Festival, and after watching it and meeting the man himself, we’ll be providing our non-spoilery impressions of his immensely enjoyable work. It feels quite important in this case, since it’s fairly different from what you might be imagining!

To put it as plainly as possible and without ruining its many joyful surprises, Mirai of the Future is a magical realism tale framed through the eyes of Kun, a four year old boy with a very vivid imagination. The entire promotional campaign for the movie is built around the fact that after the birth of his little sister Mirai, he meets her future self before embarking on an adventure – something that, while technically true, is very misleading about the movie’s true nature. Mirai of the Future is a rare breed when it comes to high-profile anime films so I’d rather not see its reception muddled due to misplaced expectations. Instead, I encourage everyone to go watch it for what it actually is: Mamoru Hosoda’s transparent autobiography, a series of household vignettes sprinkled with a bit of fantasy rather than the other way around, and a charming story about siblinghood, parenting, and family as a whole. And, perhaps most importantly, one of the funniest anime movies out there.

Although Hosoda’s previous project The Boy and the Beast was the movie he officially stated was themed around fatherhood, it’s in this one where you can see his real life as a dad made into hilarious, adorable gags. Misadventures that often feel so true to life you just know that’s exactly how he once shattered a plate and was defeated by a stove, but also family dynamics so relatable and warm that you can tell they come from his heart. The fact that it mirrors his own life is something he already alluded to when Mirai of the Future was first revealed, but the degree to which this impacts the movie can’t be understated. Not only are Kun’s childish point of view and his father’s shortcomings based off his own experiences at different points in his life, other family members with an important role in the film are also built on their real equivalents – like the film’s great-grandpa inspired by the grandfather of Hosoda’s wife. As he personally admitted in a press conference, it’s his partner’s actual words that became the mother’s sharp criticisms within the movie. But even when things don’t go quite right, Hosoda maintains a hopeful outlook, claiming family life is a learning experience for all members, young and old.

Being this grounded in his own reality didn’t only give the movie genuine warmth, but also appears to have acted as a helpful limiter. As you might know, Hosoda only recently started writing his movies all by himself. His first attempt at solo writing, leaving Satoko Okudera behind after many collaborations, was The Boy and the Beast, which had fairly serious focus problems. Mirai of the Future is instead smartly built so that Kun’s imaginary magical world (or is it?) always supports the overarching story about familial bonds, elegantly combining fantasy and pleasant mundanity ever since the design stage. For example, the fact that the father is an architect (a creative job like Hosoda’s) lead to him designing a very quirky house with the help of a real professional in the field, as opposed to working alongside an art designer as he usually would. Their house is filled with boundaries that constantly trigger the kid’s imagination and make him feel like he ventured into a magical place. At the same time, its unusual vertical structure full of stairs sparked one of the movie’s most charming, understated realism highlights, as Kun’s still too young to walk them down confidently. I can only cherish a movie where the articulate depiction of a child’s struggle to move around can coexist naturally with wild sequences drawn from Hosoda’s fondness for grand three-dimensional set pieces, which still wormed their way into the finale.

That’s a good cue to talk about the movie’s production itself, but truth be told, that’s the least surprising aspect of the film. The team has only just wrapped up their work, having put together the final version of the film on the 7th of June, but it feels like all the pieces came together comfortably in the end. It doesn’t have the grand animation highlights you can find in some of his previous films, perhaps because sakugaSakuga (作画): Technically drawing pictures but more specifically animation. Western fans have long since appropriated the word to refer to instances of particularly good animation, in the same way that a subset of Japanese fans do. Pretty integral to our sites' brand. masters like Toshiyuki Inoue opted for another director’s excellent family movie this time around, but the child’s very careful acting left just as strong of an impression. The rest, the good and the perhaps less so, is very much in line with what we’ve come to expect from a Hosoda film. His long-time ally Takaaki Yamashita made an entirely unsurprising reappearance. He’s still the perfect choice to supervise the layoutsLayouts (レイアウト): The drawings where animation is actually born; they expand the usually simple visual ideas from the storyboard into the actual skeleton of animation, detailing both the work of the key animator and the background artists., which have an almost vouyeristic quality to them. Hiroyuki Aoyama and Ayako Hata commanded the fairly expressive animation, though a certain scene also serves as a reminder of how poor the designs are when it comes to getting age across. All things considered, this was a more than acceptable production effort.

As far as I’m concerned, the most interesting aspect when it comes to Mirai of the Future‘s delivery is how harmonious it feels. In a recent behind the scenes feature Hosoda mentioned that his trademark kagenashi style, an aesthetic that generally drops shading in favor of a clean and flat look, was geared towards presenting the true feelings of children without unnecessary detail getting in the way. A movie like this that showcases genuine emotion in such a straightforward way, without getting lost among its own minor narrative threads, feels like the result of Mamoru Hosoda the animation director and Mamoru Hosoda the writer finally seeing eye to eye. There’s a cohesive vision behind it all that seems to confirm he’s becoming the complete film-maker he aimed to be. 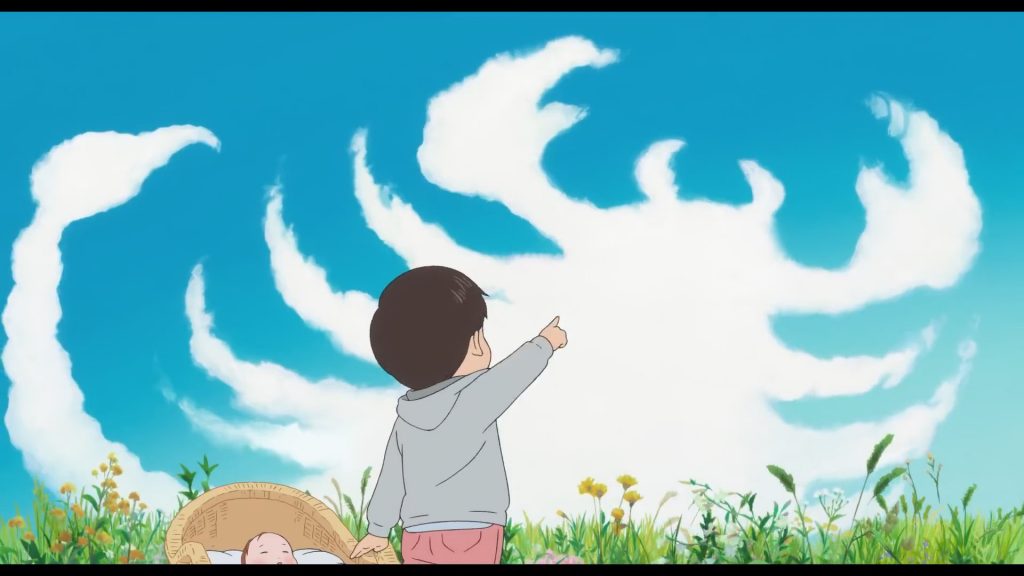 I understand why there are many fans who wish a director like Hosoda, capable of conceptualizing some of the most enchanting storyboards anime has ever been blessed with, would make grand movies. That he’d at least chase themes other than family, which he’s settled on for multiple projects at this point. To a degree I can relate, but Mirai of the Future is as strong an argument that he hasn’t taken a wrong path as Wolf Children was, despite the entirely different tone. This is a film only a director who obsesses with how to make children smile could make. It has the potential to bring joy to their lives while it makes adults burst out laughing, and that’s as close to an ideal family movie as it gets in my opinion. If that sounds in any way enticing, make sure to give this movie a try when you’ve got a chance. You won’t regret it!

So fond of magical realism, what keeps me reading Murakami.

I can’t wait to see this movie.

Were you invited to Annecy? Or was the showing open to the public?

We’ve got a couple of press passes, but it’s screening multiple times as a title in competition and badge holders can watch it as well. I imagine you’ve got to be very fast since they’re super packed though.

Ancien and the magic tablet? Maquia? I honestly don’t know.

Inoue did a frankly obscene amount of work in Maquia, so he really wasn’t available for other stuff. In a way a bit of a shame, but his animation on that film is enough of a landmark to justify it all.

I thought it best to tell you, kViN, that this article was blatantly plagiarized by another author in the provided link:

I thought you meant it borrowed stuff rather than… a literal reprint, lol.