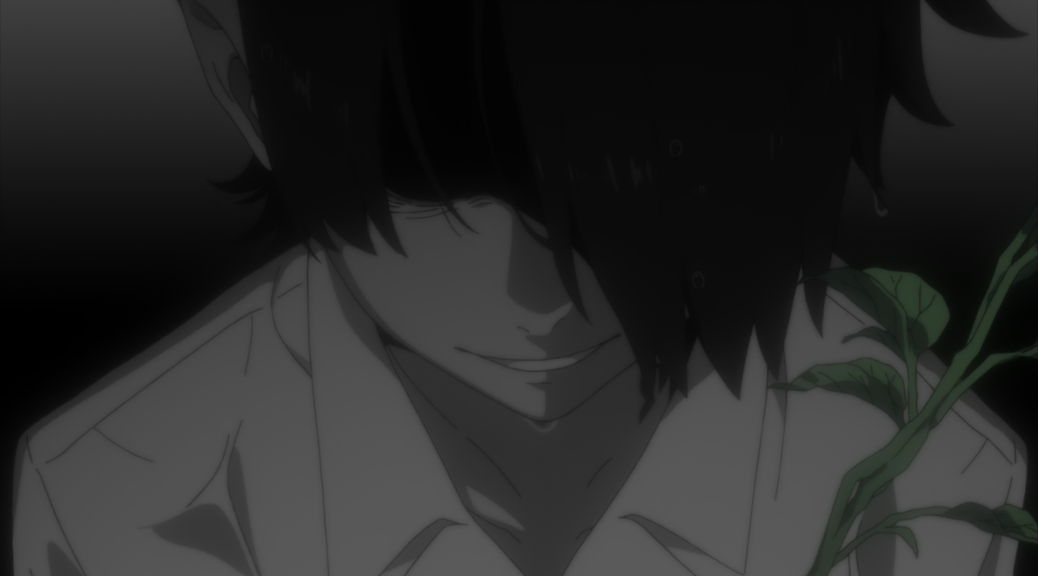 We’ve reached the halfway point of The Promised Neverland, which is a good time to examine this adaptation – whether it’s living up to its prestigious source material, the philosophy behind its direction, and the individual artists who’ve managed to stand out.

─ It was clear that everything would change after the first episode of The Promised Neverland; not just the general tone shifting after the reveal of the true nature of the series, but also the delivery of said material as it settled into its actual genre. To the credit of the team behind the TV adaptation, its identity – and that includes strengths and weaknesses – is so well-defined that the second episode already served as a nice summary of what was to come. One of the main principles that series director Mamoru Kanbe is enforcing into the show as a whole is the voyeuristic camera, as the very first scene in this episode makes so obvious. The neverending obstructed shots, that constant tracking of the main trio as if a gaze was following them, keep the audience as on edge as the characters, because the feeling of a looming menace is always there.

─ At the same time, I’d have a hard time denying that The Promised Neverland‘s lost a bit of its most conceptual horror. Without the design strengths of Posuka’s art and having to distance ourselves from the characters a bit due to all the monologues being abridged (a compromise I won’t criticize since it seems reasonable when moving from comic to television), the scenario isn’t quite as terrifying as it used to be. To address that, Kanbe’s fully invested in that voyeuristic framing, creating scenes where the characters constantly feel spied on until a shocking development does happen. While the manga is constructed with brilliant little ideas like occasionally claustrophobic paneling that captures the anxiety of the trapped kids, the anime’s opting more a more traditional, almost jump scare-y route: there’s a vaguely threatening vibe to the scene until the spooky monster (mom-ster?) catches them by surprise. Is this less unique approach a worthwhile reinterpretation of a series as exceptional as The Promised Neverland? I’ll leave that judgment up to you, but it seems very effective for new viewers, and having a clear philosophy behind it already puts this project ahead of many confused adaptations.

─ As a bit of a side note, the reason we can be so sure that many of those ideas come straight from Kanbe’s notebook is the consistency of the show’s vision regardless of who’s storyboarding. Specific concepts like the framing within a clock’s pendulum make recurring appearances in episodes he didn’t personally storyboard (02 & 05), while the behavior of the camera and construction of the layouts always follow similar patterns – realistic spaces we spy through the eyes of a disembodied threat, which keeps not just the oppressed children but the adults complicit with this system under constant surveillance. Kanbe doesn’t seem overbearing when it comes to dictating the way forward for the other directors involved… as long as they stay within the boundaries that he set to begin with, so in a way he occupies a similar position as The Promised Neverland‘s villains. As far as we know he’s not involved in any eating of children, though, so cut him some slack even if you’re not fond of the direction that this adaptation’s taken.

─ When it comes to other directors who’ve managed to leave an impression despite Kanbe’s inescapable presence, I’d like to highlight a personal favorite: Toshimasa Ishii, who storyboarded and directed episode 6. While maintaining the ideas that Kanbe’d kept stressing out, Ishii’s own principles – guidance of the viewer’s eye, neat transitions – made this episode a clear standout. The latter’s always been a forte of his, and this episode was no exception. The wipe transitions make for a seamless flow, while the match cuts (be the constant cuts from a character’s eyes to another’s, or continuing an action like a match into a lamp) are satisfying on a very visceral level. And that’s what Ishii’s got a knack for: making the simple act of following his cartoons into a gratifying prospect, regardless of what’s actually happening. Considering how well he adapts to thrillers that want you glued onto the screen in the first place and his aptitude dealing with 3D environments, you won’t be alone in thinking that maybe he should have been The Promised Neverland‘s series director.

─ If you want some more context on his career, I’d like to note that Ishii had to endure the notoriously harsh job of production assistance at A-1 for years. That was until he received his first directorial opportunities within Space Brothers in 2014, after helping from behind the scenes all the way through. A few inspired showings (most notably Your Lie in April #18) allowed him to prove his worth, which led to his next major step when he became the assistant series director in ERASED; not only was that the highest responsibility he’d been entrusted with to date, it also meant working side by side with Tomohiko Ito – a renowned director who happens to be the disciple of the one and only Mamoru Hosoda. The result of this complicated net of relationships? Ito shared his own pupil with his old master, meaning that Ishii got to act as Hosoda’s assistant for last year’s Mirai in the same way that he’d done it for The Girl Who Leapt Through Time. A curious way to become involved with such a big deal of a project! Having improved his standing even further, Ishii’s currently preparing a rather high original short anime due next month. If that lives up to its potential, I can guarantee we’ll be back with another post going in-depth on Ishii and his work!

─ But let’s return to The Promised Neverland‘s production to ask a simple question: what about the animation? When we wrote the first post about this production, we noted that the official stance of the studio being that they entrusted this show to the greatest acting specialists at their disposal was… kind of a lie, to be honest. That’s not to say that the show’s in poor hands or that they’ve been doing an unsatisfactory job, though! The acting in The Promised Neverland has stayed convincing while having some genuine peaks when the bottled up emotions are released. Similarly, the art’s maintained a level of polish to stop the complaints about roughness that fans are so quick to throw around – to a large degree, thanks to the always reliable chief supervisor Kazuaki Shimada. He’s commanded a team that includes trustworthy regulars like Slow Start‘s designer Masato Anno, capable of animating long stretches of expressive behavior, as well as notable guests like Naoya Nakayama (now known for a fantastic viral ending) and Ryosuke Nishii, who key animated the entirety of episode 3. Though he had less time than usual and that limited him somewhat, being able to include intricate sequences like Krone’s theatrics despite the massive workload proved once again why he’s one of the most exciting prospects when it comes to Japan’s character animation.

─ If I had to choose a couple of names as the most valuable players when it comes to the animation in this series, though, I wouldn’t hesitate to nominate Ken Yamamoto and Taishi Kawakami. The former’s clearly been this show’s special weapon: he elevated the first episode by singlehandedly animating a 3 minutes long chunk that included the shocking reveal and the genuine terror it caused, and then didn’t reappear until it was time for him to animate Don’s emotional outburst after Gilda and him found out the somber truth that their friends had hidden from them. A striking mix of frustration and self-hatred that gets across all the bitter feelings Don suddenly had to come to terms with. In contrast to Yamamoto’s explosions of emotion, Kawakami’s been entrusted with more understated but equally chilling moments, like the terror leaking through after Emma and Norman are allowed to drop their façades. Before establishing himself as a very promising animator, Kawakami first stood out as an exceptional character artist, with beautifully defined profiles and confident lines, as you can see in Norman’s nightmare – an unsettling sight to behold. Overall this show might not have been granted the ideal, top priority production we’d been promised, but every now and then it hits with such strength that I’m willing to forgive the concessions they made. Let’s hope they can maintain that level until the end!

i’m personally pretty satisfied with neverland’s animation and art so far, thanks to the producer and supervisor to gather the team and making sure things go as smoothly as possible i guess. as fir the animators i think they did a really good jib so far so the whole lie about adapting the series with greatest chara.animation is pretty much forgiven. if anything i have more problem with the bgm/soundtrack… since aside from the hide and seek scene from ep1 and ep6 don and norman apology scene, i dont find any that i find memorable

Thanks Kevin! Very informative, as always. One of the things that “stood out” to me about the show is the musical score. Though I haven’t started the manga and I’m not yet familiar with the source material, the score seems a bit uneven – the more atmospheric tracks work and suit the tone the show’s going for, but at times the score is all over the place – one the one hand, has a weird Hans Zimmer-ish bombastic track (at the end of episode 2), on the other – it’s intensely melodramatic (like in episode 6). A part of me… Read more »

Already replied elsewhere but yes I think that’s a solid point that I intended to touch on and missed in the end. A bit unexpected that a show with such a clear, consistent identity (however you feel about it) has these wild whiplashes when it comes to the music. By the end of the show I’d like to figure out whether it’s an issue in the score or how it’s being used and thus more of a sound direction matter. Like the other problems it’s not a deal-breaker personally, but I’m curious nonetheless.

Gotcha. My initial theory that this was due to the developments in the source material (from what I’ve been told the manga shifts gears closer to an “adventure story” in the following arc(s), correct me if I’m wrong on this one) – perhaps, if the staff’d fully committed to presenting a “thriller story”, shifting the overall direction of the music in a possible second season wouldn’t quite gel. At the same time, I wasn’t quite sure how much of an input a director usually has on the score itself compared to a sound director, hence my confusion. The fact that… Read more »