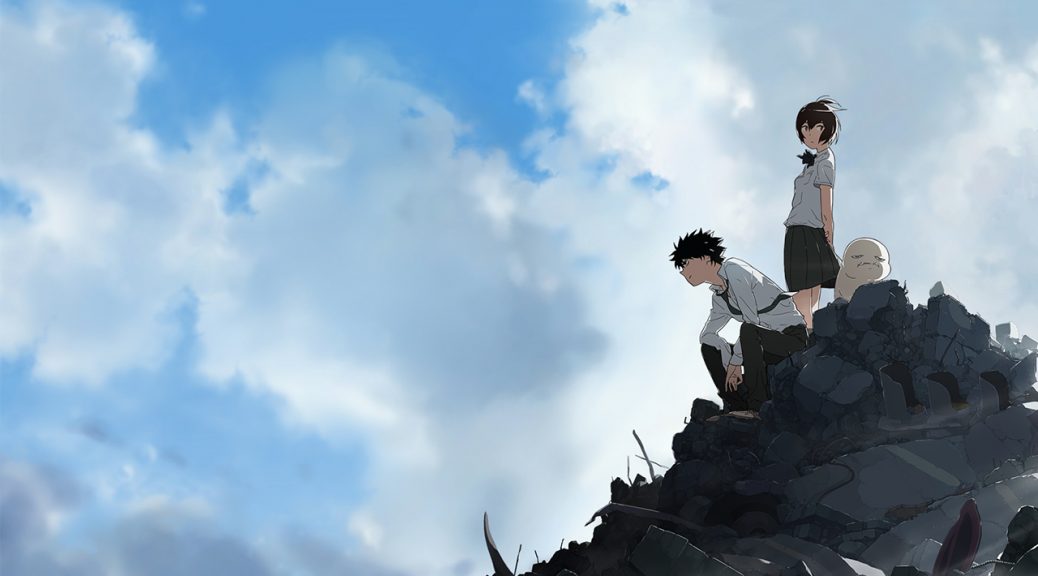 After being delayed for years, Cencoroll 2 is finally happening. And what better way to celebrate its upcoming release than examining the fascinating history of this very personal production?

Cencoroll’s 10 year anniversary campaign launched in January 9, 2019, and to say that the claims about relaunching the title were met with skepticism would be putting the reaction mildly. A healthy attitude to have when it comes to this industry, to be perfectly fair, but this time they did mean business: Cencoroll Connect – a joint screening of the original piece and the much-awaited sequel – will arrive at a handful of Japanese theaters on June 29, before presumably receiving more widespread releases. Due to a certain publisher’s involvement, you shouldn’t worry too much about not being able to watch it, even if you have to wait a bit longer. Cencoroll 2 is real now, unlike the last time they said it was.

If you never got around to watching the original, you might be taken aback by the response to this news. Exactly what’s the secret behind this humble production and its enduring popularity, and where did it come in the first place? Those seem like fair questions to explore before we can finally get our hands on Cencoroll 2! 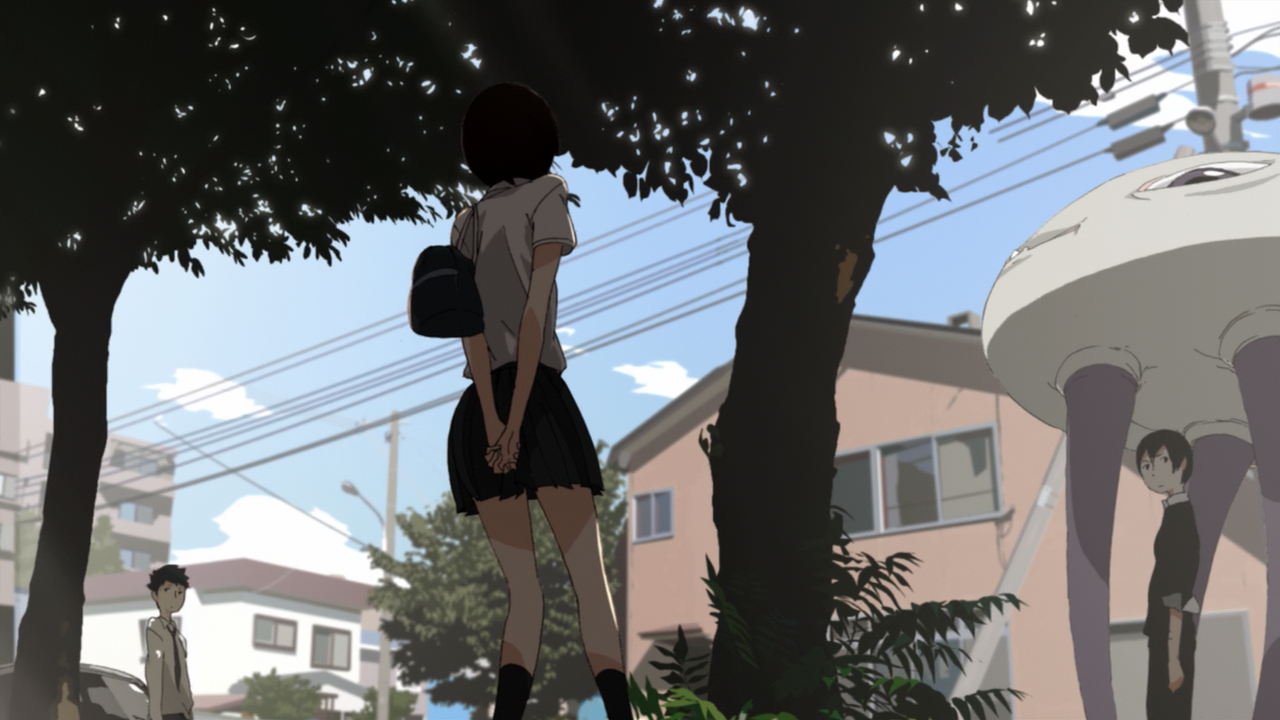 Explaining what Cencoroll is inevitably means addressing Atsuya Uki’s figure. After all, and no matter how fervent of an auteur theory detractor you are, Uki is way more than just its director. He wrote the story, based on a previous comic of his in the first place. He’s credited for its animation, but that’s a bit of a misnomer; Uki crafted the whole thing, so essentially anything you see on the screen was made by him from the ground up. Everything about its iconic visual identity, be it the globular design philosophy or the shot composition, is immediately reminiscent of his comics and illustration works elsewhere. Cencoroll is by all means Uki’s baby – not just because of how invested he is in the project, but also in the sense that it clearly inherited his artistic DNA.

With that in mind, you won’t be surprised to hear that we have to look back further than the 10 years that they’re officially celebrating to find Cencoroll’s true origins. After receiving a couple of encouragement awards in prior years, Uki won the grand prize in the Summer 2005 iteration of the Afternoon Four Season Award – which often crowns newcomers with strong potential – for his one-shot manga Amon Game: our first look into this tale of teenagers and hungry alien blobs. 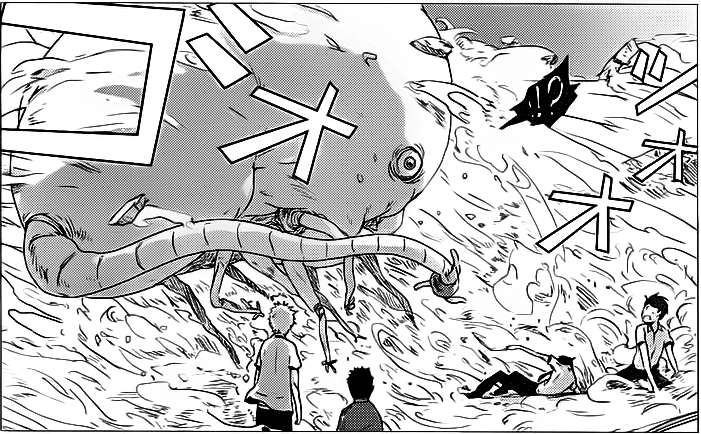 The inventive design in that proto-Cencoroll comic made up for the admittedly chaotic progression of the panels, so it’s easy to see how he won over the judges of the award… and other people as well, since he quickly managed to pitch an animated version to the Anime Innovation Tokyo program. That mid-00s initiative aspired to create a space for independent local artists to create unique works exploring the possibilities of animation in ways that might not be feasible otherwise. They’d financially support the creators to put together a pilot film over about a year, and then assist them in the process to find more partners so that their ideas could be fully realized.

While Anime Innovation Tokyo quickly faded away, they did live up to their promises when it came to Cencoroll. Uki’s pitch was selected among the first batch of projects in 2006 under the vague working title “Untitle.” He had the chance to devote himself to the project over the following months, and by January 2007 he began reaping the fruits of all his efforts. Uki uploaded the pilot film under its final title Cencoroll and quickly saw it get lots of traction online. The footage went viral among animation fans and caught the eye of external producers as well – namely Aniplex’s Atsuhiro Iwakami and Narue Minami, who’d act as executive and producer on the full production respectively.

Cencoroll‘s action-packed pilot film, featuring some ideas yet to be used in the movies.

The seemingly eternal wait for Cencoroll 2 has become a recurring joke over the last few years, but it’s worth noting that the series was never blessed with a smooth production, so if anything this is the natural way to go. Fans had to hold their breath for a couple years back in the day, since despite receiving all that support, Cencoroll didn’t start screening until summer 2009. As it turns out, making an anime movie all by yourself while your career as an illustrator gets gradually busier isn’t all that easy! Shocking, I know.

Fortunately for everyone, once Cencoroll was released it lived up to the existing expectations and then some. Much like we saw happen a few years later with the transition from Kyousougiga‘s first PV to the series itself, Uki’s final vision wasn’t quite as hectic; animated pilots like these use their explosive energy to catch the attention of investors, but once that problem is out of the way, creators can settle on something a bit less bombastic. Cencoroll traded a bit of raw energy in favor of an intriguing setup – at no point did it reveal what was the deal with the amorphous aliens that’d appeared in Japan, but it did an excellent job at hinting at a larger narrative you’d love to hear about. Returning to that Kyousougiga example, it felt greater than the sum of its parts, just like the first proper entry in that franchise.

A sample of Atsuya Uki’s one-man army production process for Cencoroll. The animation was first drawn on paper, and after scanning it, he painted it all using Photoshop and handled the compositing in After Effects.

And when judged as a solo production effort by someone with no anime experience whatsoever, its achievements were simply mind-boggling. It’s not the only time that a young newcomer to the Japanese animation scene has put together something that’d make many professional productions blush – Touko Yatabe‘s graduation piece Konohakaseki no Natsu is a personal favorite – but when you consider the sheer amount of work Uki personally did, the sheer ambition of the production, and the adaptability he showed as an artist, very few works can compare. As a viewer, you could still tell it was an indie film made by someone without a film/animation background because of details like the constant inadvertent challenging of the 180º rule, but even that lack of standard anime experience had positive effects in his storyboarding, as seen by his very illustrative scene composition sensibilities. If more illustrators could make anime all by themselves, chances are that they’d look like Cencoroll. And that’s a good thing!

It was the action frenzy and attractive, flat FXFX: Shorthand for effects animation – water, fire, beams, that kind of cut. A pillar of Japanese 2D animation. bonanza that had wowed animation fans with the pilot… and they did get that in Cencoroll‘s finished version, but also much more. Uki’s acting through gesture and snippets of loose movement couldn’t be taken for granted considering his background, whereas the understanding of space he had as an illustrator did help him when it came to conveying scale or depth. Though mostly animated on the 3s, Uki also evoked a neat feeling of fluidity when depicting Cenco’s constant morphing. Even the simple backgrounds, modeled after real locations in Sapporo, were a nice fit for his stylized aesthetic. Add to that a banger of an ending by Supercell, with whom Uki collaborated many times, and you get a cohesive (could it be any other way with a single individual making the whole thing?) and memorable spectacle.

Considering how well everything turned out in the end, the announcement in September 2010 that Cencoroll‘s sequel had been greenlit wasn’t a surprise to anyone… and neither should have been the long, troubled production process that followed that, considering all the history we just went through. You’d think that the Cencoroll 2 relaunch at AnimeJapan 2014, complete with a PV (long deleted but archived by many people) and the promise of a Summer 2014 release would have been the time, yet that was followed up by an apology for not making it to the deadline and then nothing but radio silence. If juggling the original film with illustration work on the sidelines was already tricky, things only got more complicated once Uki began getting requests to lend his designs to various anime projects. While he was never involved with the production of Tsuritama and Digimon Adventure Tri – a shame for the latter in particular as the best thing about the entire project were his iconic illustrations – those were still big undertakings that halted Cencoroll 2‘s progression.

Was it doomed forever then? Was Uki’s increasing popularity simply incompatible with this one-man army approach to his passion project? Fans couldn’t be blamed for thinking that, even if Aniplex kept bringing the series to events in what seemed like a cruel reminder of a dead dream.

And yet here we are. Cencoroll 2 is so real that advance tickets are available, and we should be getting new footage this weekend after its AJ appearance. So if there’s any conclusion to draw from this whole ordeal, it’s that Cencoroll kicks ass, and that you shouldn’t give up on your foolish dreams. I mean, did you know they’re recording for the final Evangelion film? The anime world is wild.

Edit: It only took a couple of days to get a fantastic look at the sequel!

Thanks for the article, I just recently learned about this project from the MAL’s news and was interested.

I appreciate this post (didnt know about the delays for the original) but the craziest part is cencoroll 2 being real lol. Everything is possible after kizumonogatari

The resurfacing of long-touted, stalled projects like CENCOROLL 2 always leaves interesting questions behind, specially regarding how the actual early vision for it could have changed throughout the times, from planning and pre-production into the definitive end product, after such a broad span. As an example of that; do Mr. Uki’s claims about its run-time still hold true to this day (https://web.archive.org/web/20100904041728/http://www.ukix.org/nl/?p=1236) or was it expanded instead? And what about the materials presented at events like ACE 2013? Does the following ‘ekonte’ still represent intact what will be in the finished work? These here: An evolution of the creative process… Read more »

Hmm? The images I just linked from the blog of @nishionishio (https://nuruwota.blog.fc2.com/blog-entry-2698.html) have been made inaccessible suddenly. :-/

Even if the originals seem gone, the Internet is a self-replicating entity after all:

Although these are soon to disappear as well, I suppose. 😛

Yep, that’s always a fascinating (even more so when they talk about it openly afterward, but we’re not always that lucky)

I assume that in this case there might not have been massive changes, or at least not a big scrapping of the material that already existed – the press release for the Connect news uses shots from the Cencoroll 2 PV that they deleted years ago, so it doesn’t feel like Uki threw away his previous work. It might have gotten more ambitious than he intended so I’m not sure about the runtime part though!

Speaking of illustrators getting into making anime, loundraw did something similar too and he announced a while ago he made an anime studio to work on it. https://twitter.com/loundraw/status/1083664928161050624?s=21 https://youtu.be/u79x7HzB9SQ

Big companies like Aniplex already try to work with loundraw as much as possible (collaboration on his personal piece, Bokurobo’s designs, collabs for projects like Pancreas, etc) and they’re not the only ones pitching projects, especially design-wise. I wouldn’t expect huge projects from the studio but anything will be welcome.