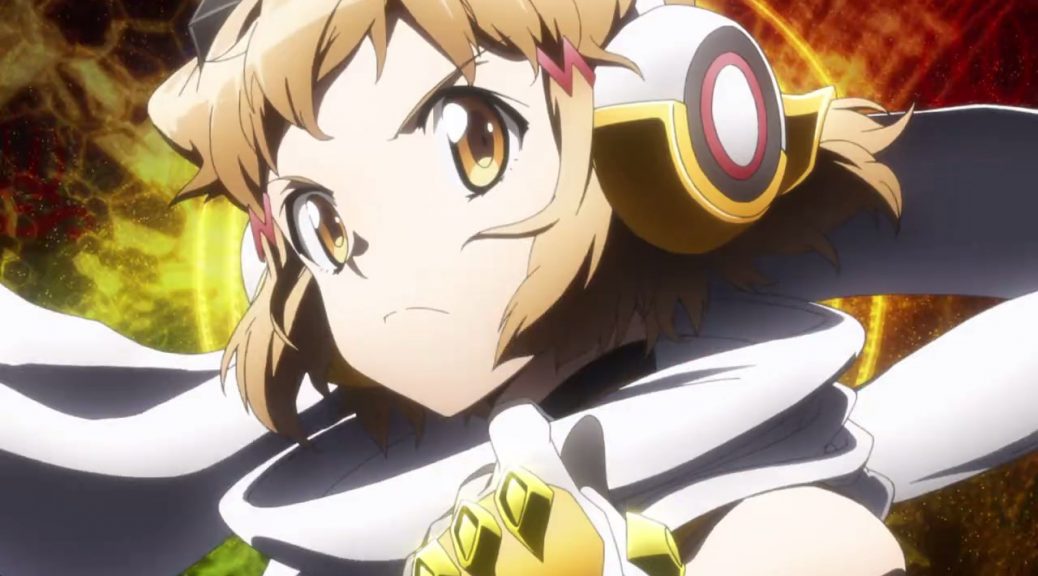 Symphogear has returned in spectacular fashion, reminding us to never forget the song in our hearts by bringing with it one of the best-produced episodes in the series so far. Join as we explore what makes this episode stand out, as well as why the series’ final season is looking to be its most visually enticing yet!

— Regardless of where you’d rank this episode when it comes to the sheer excitement that has become inherent to Symphogear intros  — come join me in the turbo hype camp — it’s hard to argue that this isn’t one of the best-produced episodes in the entire series. And not by coincidence, either! While there’s an unfortunate trend wherein the production values of sequels take a noticeable hit (due to scaling down ambition after the popularity didn’t match the committee’s goals, positive production timing being hard to replicate, key staff having to move on before the sequel is greenlit, etc), Symphogear has been lucky to find itself as one of the exceptions, instead scaling up with each iteration. Now, a whole seven years later, I’m inclined to argue that it’s finally reached its peak.

— None of this happens through magic, though, so I’d like to retread the path that led Symphogear here before tackling the episode. But since this is meant to be a fun piece for fans of the series, I’ll spare you the post-mortem on studio Encourage Film’s contribution to the franchise; after co-producing the first season and being responsible for many of its production shortcomings, it wasn’t exactly a surprise to see them set aside for the sequels. Even if you ignore the elephant in the room, though, it’s easy to tell that something happened during the transition from the series’ first season to Symphogear G. That something entailed a major reshuffling of staff, wherein Katsumi Ono took over directorial duties, Satoru Fujimoto was promoted from chief animation directorChief Animation Director (総作画監督, Sou Sakuga Kantoku): Often an overall credit that tends to be in the hands of the character designer, though as of late messy projects with multiple Chief ADs have increased in number; moreso than the regular animation directors, their job is to ensure the characters look like they're supposed to. Consistency is their goal, which they will enforce as much as they want (and can). to character designer, and almost the entirety of the team was outright replaced. And, regardless of your preferences when it comes to the design work, the changes had their intended effect: creating a stable environment for the staff, so the only madness is that of the show’s narrative.

— The changes when it comes to the very structure of the team didn’t end there, as subsequent iterations would go on to give the series’ biggest contributors new significant roles; see Kouki Shikiji‘s promotion to action director and main animator on Symphogear GX, with Toshiharu Sugie following suit in the action director seat on Symphogear AXZ. This trend continues with XV, as the two of them are now joined by both Yoshitake Nakakoji and Hiroyuki Nakashima. While the former had proven himself on AXZ, the latter came as a surprise since he is a newcomer to the series, likely brought in after his contributions to SSSS.GRIDMAN.

— The sole exception to all this was Fumiaki Kouta, whose contributions to the series have been so invaluable that he’s retained his role as action director throughout the entirety of its run. Until now, that is, since he finds himself in the assistant series director’s seat for XV. This is the most significant change for the series ever since the transition from its first season to G, as it gives him a more involved say in the production, and the results are seemingly apparent already. The series had already been steadily improving its ability to bruteforce exciting action spectacles as it went on, to the point that when AXZ rolled around they had reached a healthy balance of outrageous scenarios (conceptually exciting action) and pure animation showcases (action exciting via execution), but XV is on track to marry these two concepts together rather than let them exist as different elements of the show.

— In terms of how that applies to this episode, look no further than how the ridiculous action mostly takes place on a gigantic expanse of ice, yet the team somehow still managed to make a same-y environment like that feel layered. Not just by making sure that the research facility is integrated in the setpieces, but also through little details like Chris isolating herself on chunks of ice to take advantage of her position as the long-range attacker, and even the coffin’s own awareness in being able to smash through the ice sheet in a failed attempt render Hibiki useless underwater. Or, if we want to keep it simple, here’s Kirika and Shirabe figure skating during a chaotic situation!

— Much as we enjoy highlighting the main culprits behind impressive animation efforts, though, one person does not a production make. And if we talk about the team as a whole, I feel the need to point out that XV is already benefiting from the new blood that’s been injected into it this season. Quite a few newcomers quickly started making their presence known, the biggest name of them all undoubtedly being Takushi Koide; his animation prowess alone would make him a valuable asset on the show, but let’s not forget that it’s only been a year since he took on a major role in Revue Starlight, another show where action to the tune of singing was a major focus. Quite the relevant piece of trivia, since Fumiaki Kouta just so happened to spend some of his time there too — and this is how favors are paid back in the anime industry!

— If you want my personal highlight, and no doubt many others’, it has to be Hibiki’s new henshin. The callback to the first season’s style is a neat detail on its own, but what I appreciate most is how the entire sequence feels like the final stage of a natural progression through the series. Aspects of each of her previous transformations are all present here, but rather than treating them as simple references, they’re all applied in new ways while doubling down on the cool 2DFX work. Animator Yoshitake Nakakoji mentioned how he was given plenty of time to work on it, and the result more than shows. The bar for future henshins has been set high, but I’m willing to put my belief in that bar being met.

— One thing I’d like to mention is the noticeable presence of Yutaka Nakamura-isms in this episode; as the most popular action animator of our times, his mannerisms have spread so far that their presence is never surprising anymore, but this episode still manages to stand out in that regard. It’s no secret that I’m less than fond of the overreliance on these in modern action outings, particularly instances like Black Clover 84 where they feel like they were a goal as opposed to a technique to reach it, but I’d be lying if I said they weren’t put to surprisingly effective use here. Not just the heavy impact frames, which help depict just how powerful a blast was needed to send the coffin off its feet, but even the Yutapon cubes feel appropriate considering the glacial environment this whole encounter is taking place in. Once again, Symphogear proves that anything is possible so long as you believe in the song in your heart.

— If you want a treat to keep you excited for the next episode, Yousuke Kabashima tweeted about how his participation on the show starts there. And judging from the wording, it’s safe to assume that he’s doing more than just Key AnimationKey Animation (原画, genga): These artists draw the pivotal moments within the animation, basically defining the motion without actually completing the cut. The anime industry is known for allowing these individual artists lots of room to express their own style.!

Oh boy, I actually dropped S2 and skipped S3 and S4 but might have to watch this. Hibiki’s transformation scene alone is amazing!

I’ve read a lot of anime blogs and I must say that your unique angle of reviewing each show is really cool! I never considered how much thought goes into producing, writing, and art direction for anime. But you do a great job of highlighting all of that. Thanks so much!