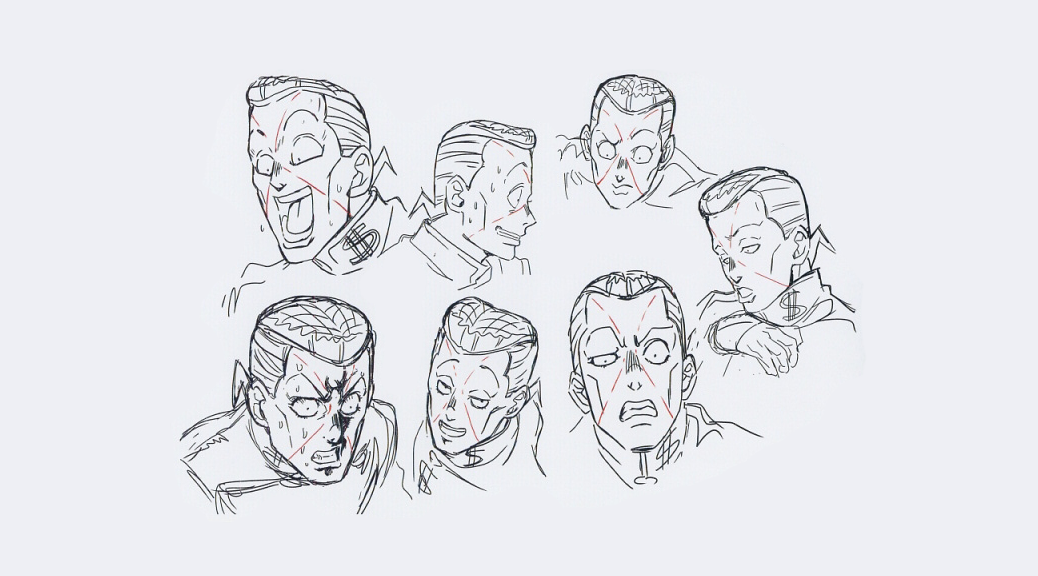 To commemorate the end of JoJo Part 5‘s anime, we’re looking back on the previous series and sharing a short but sweet interview with its character designer Terumi Nishii, where she went over her experience with the franchise as a fan and as a creator.

Credit to Kalai Chik for reaching out to Nishii and holding this exclusive interview.

Known for her work as the chief animation director and character designer on JoJo’s Bizarre Adventure: Diamond is Unbreakable, Terumi Nishii is currently a freelance animator in the anime industry while also working on her independent original series, “Crown of Uroboros.” She has worked on many other notable shows before JoJo, particularly Mawaru Penguindrum and most recently Netflix’s Saint Seiya: Knights of the Zodiac. She spoke about her introduction through the series, her views on the A.P.P.P. JoJo OVA series, and her experience as the character designer for Part 4.

Thank you for responding to my sudden request and taking the time to meet me.

Thank you for reaching out. It’s nice to meet you and speak to you.

As an introductory question, I have to ask: how did you come to learn of JoJo’s Bizarre Adventure?

I read the manga back when it was serialized in Shueisha’s Weekly Shonen Jump.

Who was your favorite character in JoJo then?

That would have to be Yukako.

At this point there have been many anime interpretations of JoJo, so which one is your personal favorite?

I’d have to go with studio A.P.P.P.’s JoJo OVA series, particularly (Junichi) Hayama’s Dio segments. I saw it when I was young, probably in high school? I found it amazing and inspirational.

I see. What did you think of the A.P.P.P. production of JoJo’s Bizarre Adventure as a whole then?

Like I mentioned before, I was in high school and thought it was very cool. However, at the time I hadn’t thought of working in animation, so my opinion at the time was genuine admiration as a fan. I would borrow it multiple times from the video stores.

It’s interesting to see how the work of the people surrounding Mr. Hayama and his very own work evolved over time, which you see even throughout the OVA series.

I actually didn’t work there directly – I simply was a freelancer who received the request to handle the designs for Part 4. Truth to be told, there actually aren’t a lot of employees at David Production.

Among your many roles in the production of Part 4, you were in charge of the character art and oversaw the opening and ending sequences as the animation director. Do you have any lasting memories of your time as supervisor?

In terms of correcting the drawings, I focused my efforts on Part 4’s ending. When it comes to the openings, I collaborated with Shunichi Ishimoto, who more recently worked on the intros for Part 5 too. As their work was coming together and they’d almost finished, I was entrusted with wrapping it all up. Thankfully, I was surrounded by very talented people, which made the process much easier.

Part 4 is quite popular in America, in part because it looks very cheery – the catchy opening itself embodies that.

I’m surprised, but you’re right that the theme is very happy compared to the ones that preceded it. When I first heard the song, I thought, “Is this really JoJo?”

I imagined something a little more “hardboiled” so to speak, but the series direction favored something more poppy.

Let’s step back to the very start of your role in the production again. Hirohiko Araki’s designs are rich in detail, but they’re not necessarily optimized for animation. As the character designer, how did you overcome the challenges of adapting his work?

Luckily, there were lots of reference material for the characters in the first place. In terms of their movement, I used the figures based on the manga designs, which were also checked and approved by Mr. Araki. I would reference those figures as much as possible and consult other members on the team.

Considering Part 4 comes right after a very different series, and the designs change from season to season, what did you struggle with?

Up until that point, JoJo characters in both the anime and manga were very big and muscular. And then, bam!, suddenly they slim down in their body structure. With that in mind, I wanted to find a happy medium.

Of course, I didn’t want them to look too macho or too skinny. I went through a lot of designs even for when it came to their clothes. Koichi, in particular, went through several transformations.

I brought a couple of the original key animation sheets and other animation materials from A.P.P.P.’s JoJo OVA series. When looking at these and comparing it to the work that you’ve done for David Production’s version of Part 4, what’s the change that stands out to you the most?

At first glance, what stands out the most to me is simply that contrast you sense when you revisit a previous generation’s style and compare it to a more contemporary style of animation.

But more precisely, there are details like new anime series choosing to include the manga’s onomatopoeias, such as the menacing sound effects of “gogogogo,” whereas that was an element absent from the A.P.P.P. OVAs. And that’s all because people like Mr. Hayama, who worked on both incarnations of the OVAs, aimed to make them look more cinematic.

The OVA series did have a more somber tone to it, didn’t it?

In that same vein, the OVA had more restrictions to it – the biggest one being the runtime. This meant that major plot points from Part 3 had to be removed in order to fit everything in those episodes. Unfortunately, a lot of the gag scenes had to be cut short or removed completely.

Comparatively, the TV anime series had fewer restrictions and also allowed for more creative freedom. Not to say that elements like that weren’t taken out as well, but there was more leeway to fit more in.

Before we end, what would you like to tell JoJo fans? And thank you for your time, of course.

I encourage you all to come to Japan, and celebrate JoJo – not just limited to the otaku space, but the entirety of the property. I’m also looking forward to seeing everyone at Crunchyroll Expo later this year!

Wow, I love that Nishii Terumi is willing to do interviews and thank you for sharing it on Sakuga Booru Blog! I hope that there can be more interviews in the future 🙂

WHOA! How were you able to land an interview with Terumi Nishii? This is fantastic! Will you be able to get more exclusive interviews. I’ve never seen a blog do this… please do more. It’s fascinating to hear the behind the scenes take on their creation.

We’ve got a bunch of them published and there’s more on the pipeline. We’d do even more of them but it’s tricky because anime creators are often busy, and people at large sadly don’t care much unless it’s a recognizable/currently relevant name (not to shame anyone, it’s simply how things are). Won’t stop these from coming though!

Fantastic interview! Didn’t expect to see analysis, much less even mention, of the 1993 OVA series from the animation director of Diamond is Unbreakable. Do you think you guys will be able to get a similar interview with Naokatsu Tsuda at some point in the future?

I’d definitely be up for it if we can reach out to him (and if he has time to spare, which is the problem a lot of the time)