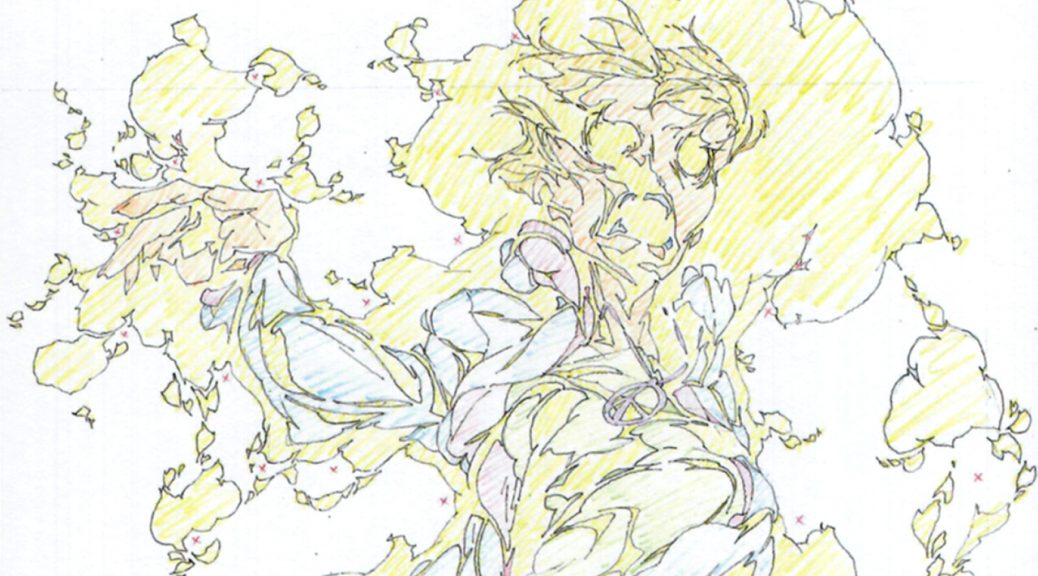 This week’s Kizumonogatari translation is a collection of commentaries by the ace animators who handled the most iconic sequences, talking about their feelings and goals with those scenes, as well as the techniques employed. This is how the most stunning moments came to be!

This is a compilation of comments originally published in the Kizumonogatari Visual Books, which you can buy here and here, as well as from the Japanese bluray booklets for some of the films.

My main responsibility was acting as animation director for the second half (starting from the scene where Koyomi wakes up in the abandoned cram school), but I also did the key animationKey Animation (原画, genga): These artists draw the pivotal moments within the animation, basically defining the motion without actually completing the cut. The anime industry is known for allowing these individual artists lots of room to express their own style. for the beginning, up to where Koyomi climbs the spiral staircase. In order to make his movements look believable, we recorded real footage of those same actions and used that as the basis when animating. I wouldn’t go so far as to call it rotoscoping, but it was a similar process.

I was in charge of the part where Koyomi goes out onto the roof, up until the opening credits, but I mostly spent my time drawing crows (laughs). Most of the crows are hand-drawn, with some shots where the camera circles around making use of 3D instead. For the crows that fly off around Koyomi as he burns up, I drew about 5 variations with different flight trajectories, and I specified which get used where to make it all look random.

I worked as the key animator for a part of the scene where Meme shows up, and was basically a backup animation director for the rest. I’m always thinking about how to blow away the audience, so I drew this scene with the same attitude of adding in an element of surprise. The explosion when he lands was not originally in the storyboards. I thought people would not expect him to suddenly come running out of the explosion after falling down, which is why I went with it.

Koyomi’s body as he strips

Oishi told me that the scene where Koyomi takes off his clothes should be fan service, so I kept that in mind (laughs). Looking back now, I can’t help but think that I should have let the camera linger more in that sense… When it comes to the Hanekawa cuts, I struggled with figuring out how much to go off-model for her expressions.

I’d highlight the scene where Kiss-shot grows up as she’s surrounded by crows; those were a pain to depict, but I had fun drawing her.

The truth is that I notice all the flaws in the parts that I worked on, so I have a hard time watching it without losing my composure… On the other hand, they added a lot of things I didn’t expect like the sound effects, which kept things interesting. 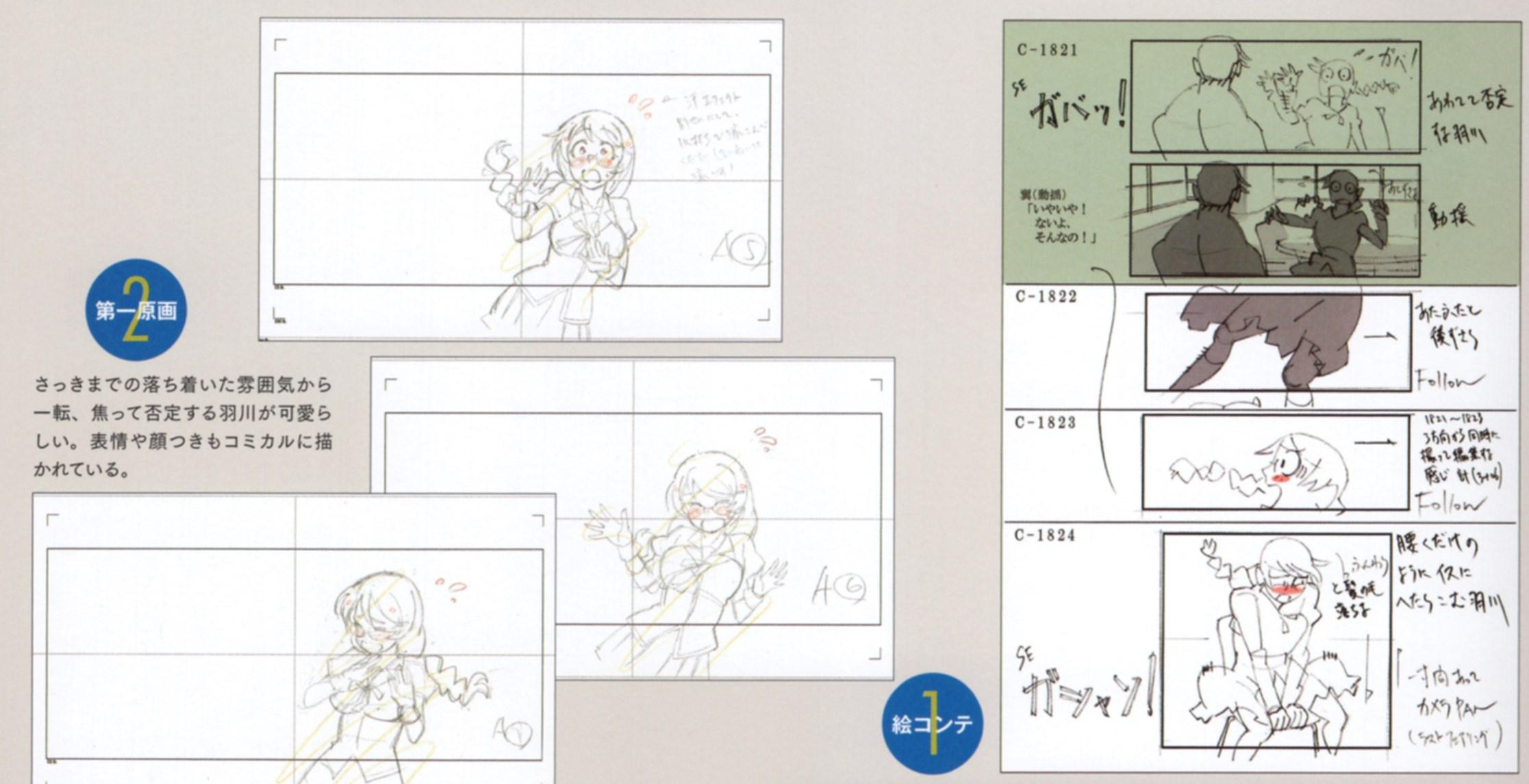 When we originally discussed Cut-2361 (where Koyomi runs up to Hanekawa), the idea was to have him look scary, like something out of a horror movie. But as I drew it out, it ended up going in the complete opposite direction… (laughs bitterly) Well, Oishi was amused by it, and I got to give him realistic movements while also including fun anime-ish bits (like the hand smearing), so it ended up being an amusing cut.

The focus in Cut-2391 (where Hanekawa runs across the field) is on her emotional relief after letting out her feelings to the boy she likes. So my plan was to draw facial expressions for her unlike what you’d seen before, but that turned out to be an extremely difficult task. Building on the previous cut where Hanekawa slowly turns around before breaking into a run, I tried my best to convey her emotional state as well as the sense of speed.

The cut I paid most attention to was, as you might guess, the sequence where Hanekawa takes off her panties. At the meeting, Oishi told me, “I want animation that will surpass rotoscoping!” much to my dismay. In other words, he was asking for animation that would make people think it looked so realistic it must have used rotoscoping. And truth to be told, we had used a kind of pseudo-rotoscoping going back to the first movie. With that in mind, this scene might have been an effective place to use it. But that’s why I took extra care in drawing it out, so that Oishi wouldn’t take a look and say we should use rotoscoping after all. Hopefully the viewers will take notice as well.

Everything looks great, Koyomi is hot, and Hanekawa is an adorable angel. The scene turned out well and it felt like a slice of adolescence, almost enough to make me forget Koyomi’s holding a pair of panties (laughs). When you think about the story past Kizumonogatari, there’s a tinge of sadness as well, and I couldn’t help but wish yet again that Koyomi had gone with Hanekawa. As for me, it was hard to strike a balance working on scenes that were funny, serious, and sexy at the same time. But it was fulfilling work and I had fun doing it.

It was hard to figure out how the camera should move at first so I consulted with Oishi countless times, and even had him take me to the Yoyogi National Gymnasium. I ended up drawing a bunch of variations before landing on a final version. It’s interspersed between other shots so that it’s okay that their positions don’t match up at all from the scenes that come before and after.

Hanekawa passes by Koyomi running at full speed, and doesn’t manage to turn smoothly, losing her balance as if she’s about to trip. Then she runs off as if throwing someone off, which is meant to reflect her emotional state, so hopefully people pick up on that. Also, it’d be nice if you could appreciate how realistically Hanekawa’s braid moves.

The backgrounds are CG so when doing the layoutsLayouts (レイアウト): The drawings where animation is actually born; they expand the usually simple visual ideas from the storyboard into the actual skeleton of animation, detailing both the work of the key animator and the background artists., I drew a couple dozen rough background stills at intervals to convey how the camera moves. Seeing it in motion with the background makes it instantly feel convincing. It’s not just this scene, but whenever I watch a completed scene, I end up noticing all the mistakes, so it really takes its toll on my stomach (laughs).

I received this sequence with notes asking to make sure that viewers are able to tell just how desperate Koyomi is. To achieve that effect, we had a lot of discussions about minute details such as the height of the camera, and bent the truth for how wide the rooftop was or how much it rained. The goal was to create a cut that prioritized the emotional reality instead.

The rain that hits their bodies was separately hand-drawn, at Oishi’s request. As I worked on the cut, I referenced the (incredible) materials that Genichiro Abe, as the animator specifically in charge of the rain, had created.

I think you can tell how hard all of the different departments worked on the movie. I can see the mistakes in the scenes I animated and helped correct, so I’ll give it my all for the upcoming Reiketsu.

An impassioned scream for joy

We spent time working out the fine details for the characters’ shadows. Kizumonogatari generally goes light on the shading, but for this sequence of cuts, there’s a clear light source directly overhead, so we couldn’t escape the shading here. Shadows are something that you can keep adding more and more detail to if you see fit, but you run the risk of losing Kizumonogatari’s simple style by taking it too far. It was difficult to strike the right balance.

Kiss-shot is an undeniably powerful being who has been alive for about 600 years and is named “The King of Apparitions”, but despite that she’s unexpectedly childish and emotionally fragile, and I think that disconnect is what makes her a cute (the cutest!) character. I’ve liked this scene ever since I read the novel, so I gave it my all to draw Kiss-shot frolicking and being all adorable.

I felt that some (extremely few) parts came out surprisingly well, while others (too many) had mistakes, which was excruciating… In that regard it’s depressing, isn’t it? That said, I’d be happy if the people who watched this scene came out of it thinking that Kiss-shot is adorable, even if just a little.

In the meeting, Oishi simply told me to give her a cute stylized face. But I had a hard time nailing that, and ended up drawing countless retakes in the end.

I tried inserting a lot of keyframes and making adjustments, but it took a lot of time until it looked good. This is actually the cut where I pushed myself to my limit.

I was already given quite a lot of freedom for Tekketsu, and I got to participate in even more shots for Reiketsu. They even accepted my requests to make changes to the storyboardStoryboard (絵コンテ, ekonte): The blueprints of animation. A series of usually simple drawings serving as anime's visual script, drawn on special sheets with fields for the animation cut number, notes for the staff and the matching lines of dialogue. More, so the work ended up being very enjoyable. However, I was asked to redo the cut of Kiss-shot turning back where her head was tilted 45 degrees.

There was a chance that the rough key animationKey Animation (原画, genga): These artists draw the pivotal moments within the animation, basically defining the motion without actually completing the cut. The anime industry is known for allowing these individual artists lots of room to express their own style. for the cuts my brother was in charge of wasn’t going to be ready in time for dubbing, so I actually made some stand-in sequences for those too. Out of all the ones I did, the one for cuts he handled in this film came out the best, so it’s a shame that it won’t be seen.

Since I personally handled the painting and the tentative compositing processes for my own cuts, I thought I had a good idea for what the finished footage would look like. But when I actually watched it, I kept alternating between thinking, “Did I go too far with this?” and “Maybe I could have gone wilder with the animation here.”

I think as a whole, it’s a movie filled with artistic tension and animation that defies expectations. So taking a step back, the conclusion I came to was that it’s fine the way it is.

This applies to Tekketsu as well, but I must say that the 3D and compositing work was excellent. It really went a long way toward fixing up the parts I worked on that had felt lacking, so I have nothing but gratitude to show on that front.

This is the first and only interview I’ve seen from Kou Yoshinari, besides some short comments about his design philosophy on Valkyrie Profile.

That’s why I chose it! These are cherrypicked since they weren’t published together, and Aninari’s was essentially the reason why I went with this rather than another normal cohesive interview.